Home / Stories / 11 things you never knew about 'The Big Valley,' TV's greatest Western with a female lead
Did you know?

11 things you never knew about 'The Big Valley,' TV's greatest Western with a female lead

The Barbara Stanwyck series has links to 'Gone with the Wind,' 'Midnight Cowboy' and 'Airplane!' 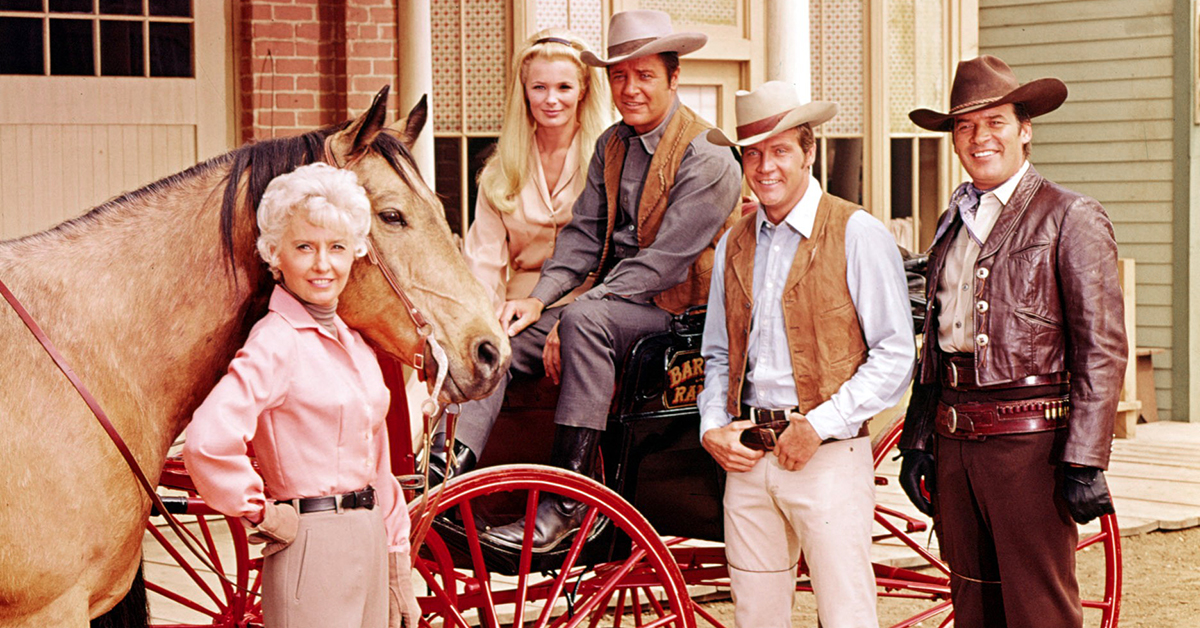 Westerns are known for their rugged cowboys, leather-clad men who can punch, shoot and ride. It's a traditionally masculine genre. That being said, Westerns have given television some strong female characters. Miss Kitty from Gunsmoke immediately comes to mind. It is however rare that a TV Western centers around a woman.

The syndicated Annie Oakley told the tale of the famed sharpshooter in the late 1950s, with Gail Davis in the lead role. Otherwise, The Big Valley stands as the epitome of the female-led Western. The series chronicled the saga of the Barkley clan, a wealthy family led by a widowed matriach in Stockton, California, in the late 19th century. Victoria Barkley stood tall and tough, displaying just as much grit as her sons Nick and Heath.

There was no better actress to play Victoria than Barbara Stanwyck. At one point, in 1944, the Hollywood legend was the highest-paid woman in America. Beloved by audiences and the industry, the actress commanded attention in breaktaking films like Double Indemnity.

The Big Valley also featured young Linda Evans, who clearly studied from the master on her way to Dynasty. Alongside those two wonderful women were macho icons Lee Majors and Peter Breck, playing Heath and Nick, respectively. The show offered the perfect balance of action and drama. It's no wonder the 1965–69 series garnered such a devout, diverse fanbase.

Let's take a deeper look into The Big Valley.

1. Barbara Stanwyck earned several awards for her work on the series.

After the first season, Stanwyck nabbed the Emmy for Actress in a Leading Role in a Dramatic Series.  She earned nominations the next two years, too. In 1967, Photoplay magazine also named her America's favorite TV actress.

2. Linda Evans lived a block from Barbara Stanwyck and called her "Mom." 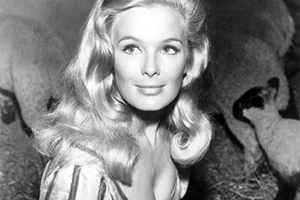 On set, Stanwyck and Evans had a mentor-apprentice relationship that grew into something closer to familial. According to a People magazine profile of the actresses, the two ended up living down the street from one another. Years later, when Stanwyck appeared on Dynasty, Evans still called her former costar "Mom." Stanwyck noted, "The first season on The Big Valley, Linda didn’t always listen to me and I didn’t like that. But the second season we spent a lot of time together and she did better. That is, once she stopped giggling.”

3. Peter Breck reportedly had the fastest gun draw in Hollywood.

Brek was no stranger to the saddle. In fact, he had previously starred in Black Saddle, playing a gunfighter-turned-lawyer. According to Wildest Westerns magazine, Breck was purportedly able to draw his gun in 16/100ths of a second, making Nick Barkley the fastest draw in television history. Though perhaps not in this clip.

4. A cast member had to leave the show after being drafted in the Army. 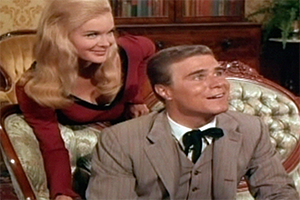 Yes, there was once another Barkley boy early on. Eugene, the youngest Barkley, appeared in a handful of episodes. Played by Charles Briles, Eugene was an excitable medical student studying at Berkeley. He popped up sporadically throughout the first season. Briles then received his draft notice. Producers wrote the character off the show, explaining he went off to med school. His name was mentioned just once again. Briles volunteered for the California National Guard and was on duty for the 1965 Watts riots, according to his obituary.

5. They recycled a costume from 'Gone with the Wind.' 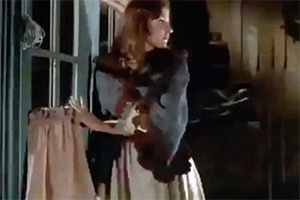 Barbara Stanwyck was at one time considered for the lead role Scarlett O'Hara in Gone with the Wind. That may not have come to fruition, but a piece of the timeless Civil War film did follow her to The Big Valley. In "The River Monarch," Nick's girlfriend wears a knit gray jacket with red trim. The same coat had previously been worn by Olivia de Havilland in Gone with the Wind.

6. There were two attempted spin-offs. 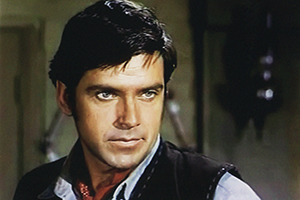 The Big Valley was never a major ratings hit, despite its loyal following. Nevertheless, producers twice tried to create spin-offs with backdoor pilots. The episode "Rimfire" was to set up a series starring Van Williams as Sheriff Dave Barrett, pictured here. More interestingly, "The Royal Road," a story about a visiting Indian prince, was meant to set up a series starring Sajid Khan,who would have become one of the rare Indian leads on American television.

7. Singer Lou Rawls made his acting debut on the show, in an episode scripted by one of TV's first black writers. 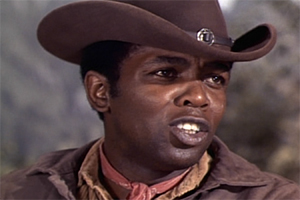 The Big Valley was a progressive series. Robert L. Goodwin, one of the first black screenwriters in American television, who had broken into the industry writing for Bonanza, penned the script to "Joshua Watson." Soul singer Lou Rawls, who had recently rocketed up the pop charts with "Love Is a Hurtin' Thing," made his acting debut in that episode, uttering the great line, "Ain't a horse that can't be rode; ain't a man that can't be throwed."

8. They kept Lee Majors from starring in 'Midnight Cowboy.'

Majors was set to star as Joe Buck in the acclaimed Dustin Hoffman film. However, The Big Valley was renewed, and Majors could not get out of his contract. Thus, the role was given to Jon Voight. Who knows if we would have ever gotten The Six Million Dollar Man if Majors had been allowed that cinematic showcase?

9. Regis Philbin appeared in an episode. 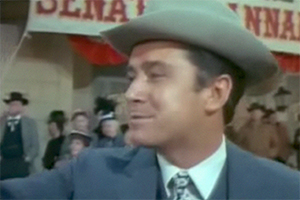 Yes, Regis is far more than a talk show host, game show host and singer. He acted a bit, too. Philbin's personality pops off the screen when he appears in "The Challenge." The Big Valley packed in a bunch of guest stars, from Richard Dreyfuss and William Shatner to Milton Berle and Cloris Leachman.

10. There a reference to the show in 'Airplane!' 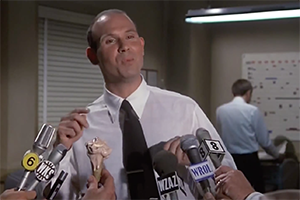 In the classic 1980 comedy, the kooky, exuberant air traffic controller Johnny (Stephen Stucker) makes a passing reference to The Big Valley. It happens when Lloyd Bridges' character recalls a pilot who once cracked. Johnny blurts, "It happened to Barbara Stanwyck!" before mimicking, "Nick, Heath, Jarrod – there's a fire in the barn!"

11. A reboot with Susan Sarandon was put on ice due to fraud. 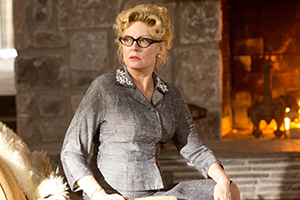 Indeed, all properties from Hollywood's past are ripe for a remake. In 2010, a cinematic reboot of The Big Valley was put into motion. Susan Sarandon was first attached to the role of Victoria Barkley, later followed by Jessica Lange. However, a couple years later, the project was indefinitely shelved after the film's would-be director, Daniel Adams, was indicted for fraud due to work he had done on two prior movies, The Lightkeepers and Golden Boy.

Velocity 2 months ago
Linda Evans has got to be the prettiest woman on TV at that time. She has the nicest ass & her titties could be just a smitten larger but what she has are still perfect because any more than a mouthful is a waist.
Like Reply Delete

zan546 2 months ago
How come there was not ONE mention of Richard Long aka Jarrod Barkley???
Like (2) Reply Delete

Velocity zan546 2 months ago
He passed away at the age of 40 from a massive heart attack. That's just honoring him.
Like Reply Delete

TheDavBow3 Velocity 2 months ago
When I was a little kid, Heath was my fave. As I got older, Jarod became my favorite. I read that Richard Long, Tony Curtis, Rock Hudson and Jeff Hunter all got into acting @ the same time. They all friends/rivals. Shame the Richard didn't quite have success and fame as the others. Especially tragic for Jeff Hunter. Such a sad, "what if", untapped potential kinda story.
Like Reply Delete

TheDavBow3 2 months ago
Loved the show and theme song. For a long time, I didn't realize that Heath Barkley and Steve Austin was the same person! 😀
Like Reply Delete

Velocity TheDavBow3 2 months ago
He had a love affair with Linda Evans during the filming of Big Valley.
Nick had an affair with the good-looking B Stanwyck, lucky bastard.
Like (1) Reply Delete

ASperos 3 months ago
Love that show!!!
Like Reply Delete

Chesly1961 18 months ago
In the beginning of this article they only mention 2 sons, 2nd born son Nick ( Peter Breck ) & his half brother, Heath ( Lee Majors) as Victoria Barkley’s ( Barbara Stanwyk) sons, ( heck! They even mentioned Eugene the youngest son who went off to college to be a doctor, he was shown only a few times in the first episodes of the first season before the actor that played him got drafted ) but they forgot to mention oldest son, prominent Attorney at Law, Jarrod Barkley,
( played by, Richard Long )!! Shame on whoever wrote this article!!! Seems I know more about this show than you do!! My husband and I own all 4 seasons on DVD, and watch them quite frequently, & continuously. Bruce Dern, Richard Anderson, Kevin Hagen, James Whitmore, & Royal Dano all played recurring guest roles amongst others. And, Buddy Hackett, and Marty Allen, Lee Grant , Karen Black, Robert Fuller, Katharine Ross, Johnny Crawford, (Rifleman) a young Ron Howard, even actress, Catherine Garver, aka Cissy - Buffy & Jody’s older sister on the sitcom Family Affair with Brian Keith & Sebastian Cabot were also among many famous guest star appearances! Plus many more I’ve neglected to mention.
Like (4) Reply Delete

Dan Chesly1961 5 months ago
Alongside those two wonderful women were macho icons Lee Majors and Peter Breck, playing Heath and Nick, respectively. Apparently, Richard Long was not considered "macho" enough to be mentioned.
Like Reply Delete