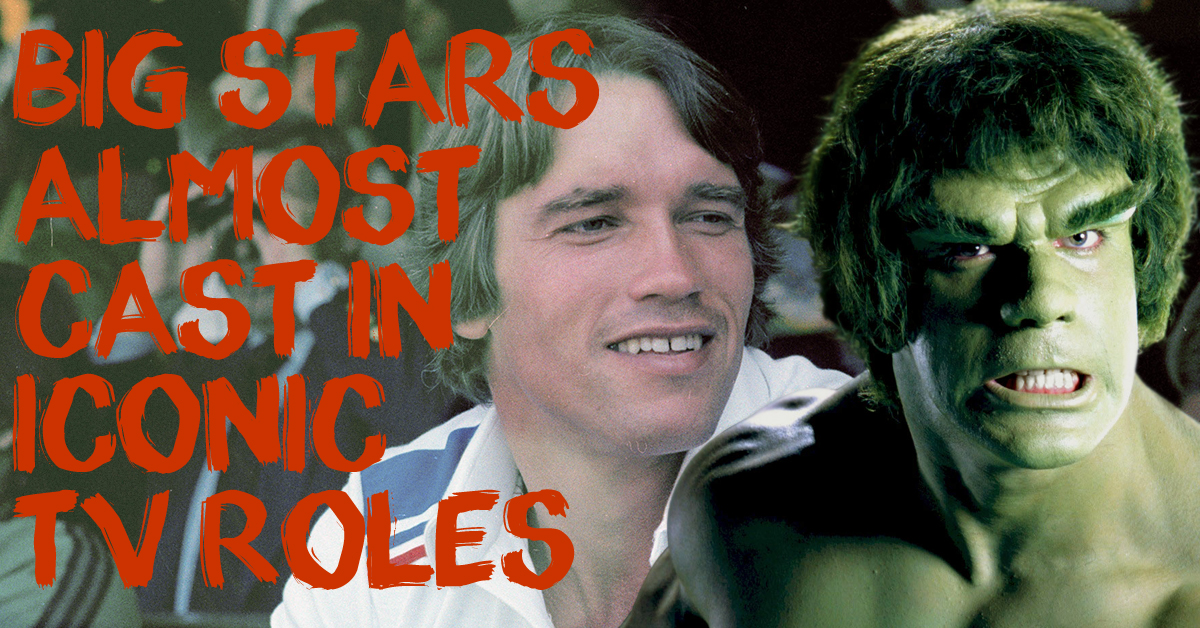 Casting has always been a competitive game, and for top acting talents, accepting a role isn't always just about saying yes in the moment. It's about the longterm trajectory of your career, and where this particular role fits in. Sometimes, it works. Sometimes, it's not quite right.

For many actors, there's no better place to turn than classic TV to land breakout roles or get their feet wet in their earliest parts. But what about all those TV roles these massive stars missed out on or chose to turn down?

Here, we offer a look back on some of classic TV's biggest parts, borrowing the view from the casting director's chair on hit series like Happy Days, I Love Lucy, Star Trek and more. Below, see all the famous faces you came this close to associating with some of TV's most iconic characters. 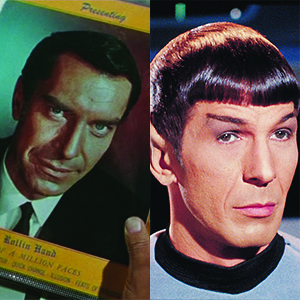 Star Trek debuted in 1966, with Leonard Nimoy playing Spock, of course. Martin Landau was also notably considered for the part, but as TV history unfolded, instead of the world's most logical sidekick, Landau was destined that same year to become an Emmy-nominated master of disguise as Rollin Hand on Mission: Impossible.

2. Arnold Schwarzenegger as The Incredible Hulk 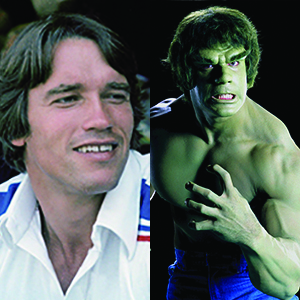 Before Arnold Schwarzenegger commanded audiences' attention as Conan the Barbarian in 1982, he was considered for the starring role in the 1977 series The Incredible Hulk. The part went to another bodybuilder, Lou Ferrigno. Arnold did appear as a bodybuilder on TV that year, though, in both The Streets of San Francisco and The San Pedro Beach Bums. 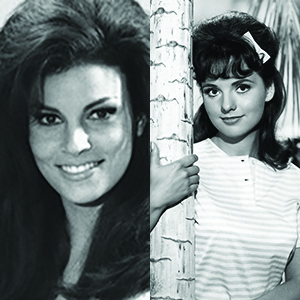 By the time Gilligan's Island premiered in 1964, Raquel Welch had been cast in a few bit parts on TV shows like McHale's Navy and Bewitched. If she'd been cast as Mary Ann on the show, then, it would naturally have been her breakout role. Instead it was a small part in the 1966 movie One Million Years B.C. that rocketed her to fame as a Hollywood bombshell, instead of one of TV's prettiest girls next door. 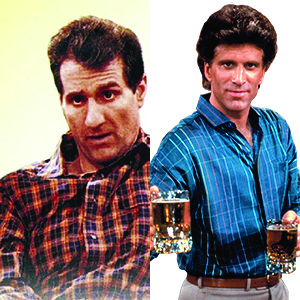 Ed O'Neill ultimately became a TV icon, as everyone's favorite grouchy patriarch on the 1986 series Married With Children. But can you even imagine how different his career would've spun if instead he'd been cast as Cheers leading man Sam Malone? Since he wasn't, when Cheers premiered in 1982, O'Neill settled for the starring role in a TV movie called Farrell for the People. 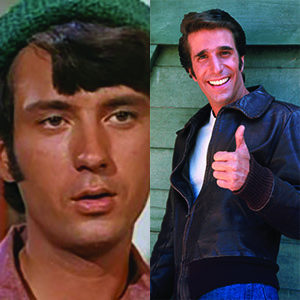 After The Monkees series ended in 1968, its towering star Michael Nesmith took a long break from acting. That didn't stop him from trying out for the part of Fonzie on Happy Days, though. When the part ultimately went to Henry Winkler, Nesmith wouldn't be seen again on TV until he hosted his own short-lived 1985 series Television Parts. 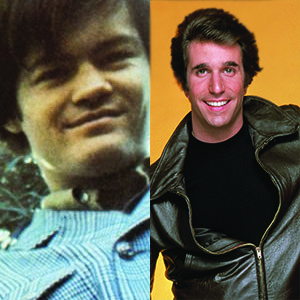 Nesmith wasn't the only Monkee to extend a thumb towards landing the part of the Fonz. Micky Dolenz came even closer to landing the gig, but in the end, he was just too tall to cast. Lucky for Winkler he was a full six inches shorter. Dolenz went back to building his burgeoning career as a voice actor, appearing in various animated series throughout the rest of the 1970s, including a stint voicing many characters on nearly every episode of Captain Caveman and the Teen Angels.

7. Frank Sinatra as The Joker 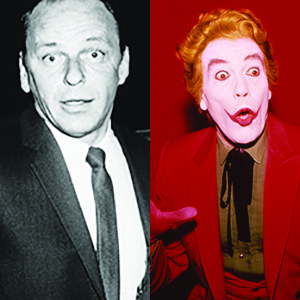 Cesar Romero's Joker from the 1966 Batman series is still regarded by staunch fans as the best portrayal of the character on film. But according to Burt Ward, the part could've gone to Frank Sinatra if he'd only piped up a little bit sooner. By the time Sinatra asked for the part, Romero had already beat him to the punch (POW!), officially cast as the green-haired villain before Ol' Blue Eyes had a chance to bat his lashes at the casting director. 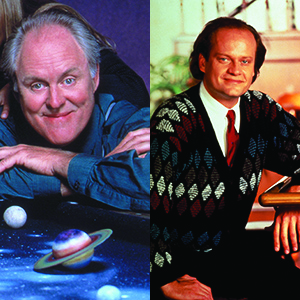 Even though Kelsey Grammer stole the spotlight any time Frasier Crane inserted himself into a scene on Cheers, it's fun to think about how actor John Lithgow would've approached the part. He was in the mix when the part ultimately went to Grammer. It's probably for the best, since Frasier became one of the most successful spinoffs in TV history and Lithgow shortly after starred in memorable 1980s movie roles, in films like Terms of Endearment and Footloose. Lithgow eventually got his chance to head his own sitcom family, winning three Emmy Awards for his role on the oddball 1996 series 3rd Rock from the Sun. 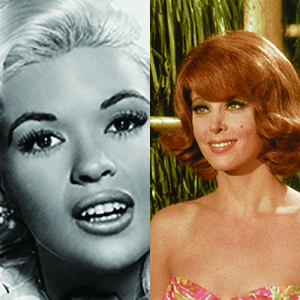 You can't blame Gilligan's Island for trying to land a legit "movie star" to play the part of Ginger. They asked Jayne Mansfield to do it, but she turned it down to avoid being typecast. The next year the actress, who had won the Golden Globe in 1957 as the Most Promising Newcomer, was sadly lost in a fatal car accident. TV viewers instead met Ginger as performed by Tina Louise, who coincidentally won the same Golden Globe award in 1958. 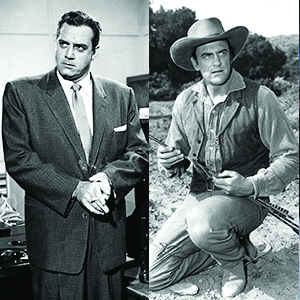 TV as we know it would've looked so different if in 1955 Raymond Burr would've been cast as Matt Dillon on Gunsmoke. The Western series ran for 20 seasons, which meants Burr surely would have never made it to the first audition for Perry Mason. That show debuted two years later in 1957. For his part as Perry Mason, Burr was told to shed some pounds, and it seems the same issue with his weight is what kept him from being cast in the Western series, too.

11. Caroll O'Connor as The Skipper 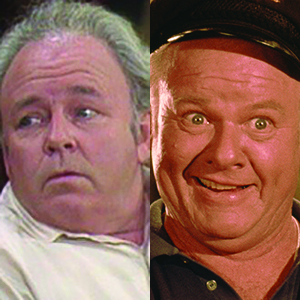 The world met Archie Bunker in 1968 when All in the Family first aired. There's a slight chance that actor Caroll O'Connor would've still been the face we associate with that famous TV name, even if he had been cast in 1964 as The Skipper on Gilligan's Island. He tried out for the part, but in the end, Sherwood Schwartz didn't think O'Connor was right for it, going instead with Alan Hale, Jr., whose audition story, you should know, is a whopper of a tale. 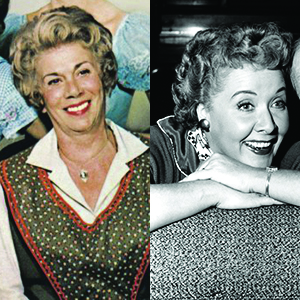 It was The George Burns and Gracie Allen Show that kept Bea Benaderet from being cast as Ethel Mertz on I Love Lucy. Lucille Ball had already picked Benaderet out for the part, after working together well in radio. But Benaderet signed with the other show first, and so Vivian Vance became Lucy's best bud instead. Benaderet's show ultimately lasted a year longer than Lucy's, plus her character continued for two years, featured on The George Burns Show. So, we say everything happened as it should. Still, you have to wonder how Benaderet would've looked in Vance's shoes in more than a few memorable scenes of the iconic sitcom. 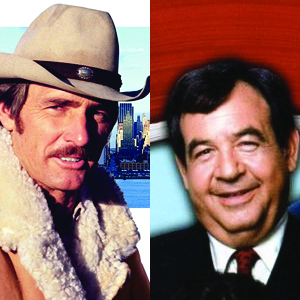 There's actually an early pilot of Happy Days where Dennis Weaver indeed does play Howard Cunningham on the famous classic sitcom. But when the show got picked up, Weaver ditched it, preferring to star in McCloud instead. That's how we ended up with Tom Bosley, and when it comes to Mr. C, it's hard to imagine it turning out any other way. 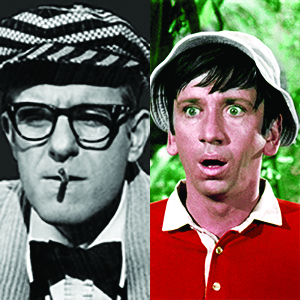 It was always fun any time Jerry Van Dyke dropped into The Dick Van Dyke Show in the early to mid-'60s, but what the actor really wanted was to head a sitcom of his own. Few folks back then knew that the actor was at the same time considering starring in an entirely different kind of sitcom: Gilligan's Island. In the end, he turned the part down because he didn't want to join an ensemble cast. The next year, though, his dream briefly came true and he got to be a sitcom star on the short-lived series My Mother the Car. 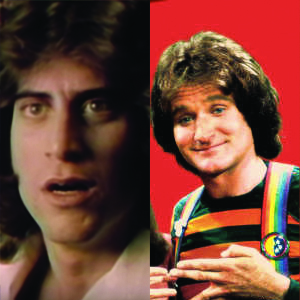 According to Richard Lewis, he and Robin Williams were both trying out for the starring role in Mork & Mindy, which we all know went to Williams. Lewis was called up to audition first, and though he was going for an alien accent, he says he sounded more like a lost Danish guy than an invader from another planet. Lewis gave up trying in the middle of his audition and told them the showrunners would have to be nuts to not cast Williams. Thankfully, Williams' audition was zany enough and Mork & Mindy's casting directors were apparently very sane. 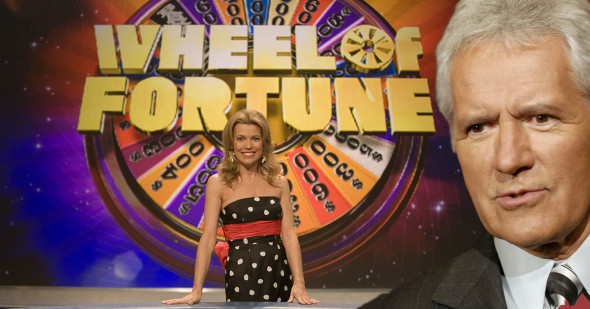 NEWS
Finally, 'Jeopardy!' and 'Wheel of Fortune' will be inducted into the Broadcasters Hall of Fame
Are you sure you want to delete this comment?
Close

RobertDubs 4 months ago
Ed O'Neill may not have played Sam Malone, but he did get to (sort of) be opposite Shelley Long, in Modern Family.
Like Reply Delete

rycki1138 24 months ago
Harold Gould played Howard Cunningham in the original pilot for Happy Days, not Dennis Weaver. It was shown as an episode of Love, American Style.

ABC decided not to turn the pilot of "New Family in Town" into a series, but used it as a segment/playlet of "Love, American Style" in 1972, entitled "Love and the Happy Days." Ron Howard and Anson Williams appeared in the skit. There was an even earlier attempt at a pilot episode with Dennis Weaver and Ron Howard. This was later redone as part of the regular Happy Days series episode where Richie came home drunk after going to a strip club. Marion Ross also had a scene. This was not a full Love, American Style episode, just a partial episode.

rycki1138 24 months ago
They offered Columbo to Bing Crosby, but he turned it down. Nancy McKeon (Facts of Life) was the first choice for Monica on Friends. Gene Hackman was up for the role of Mike Brady, but the network wanted someone more well known.
Like (1) Reply Delete