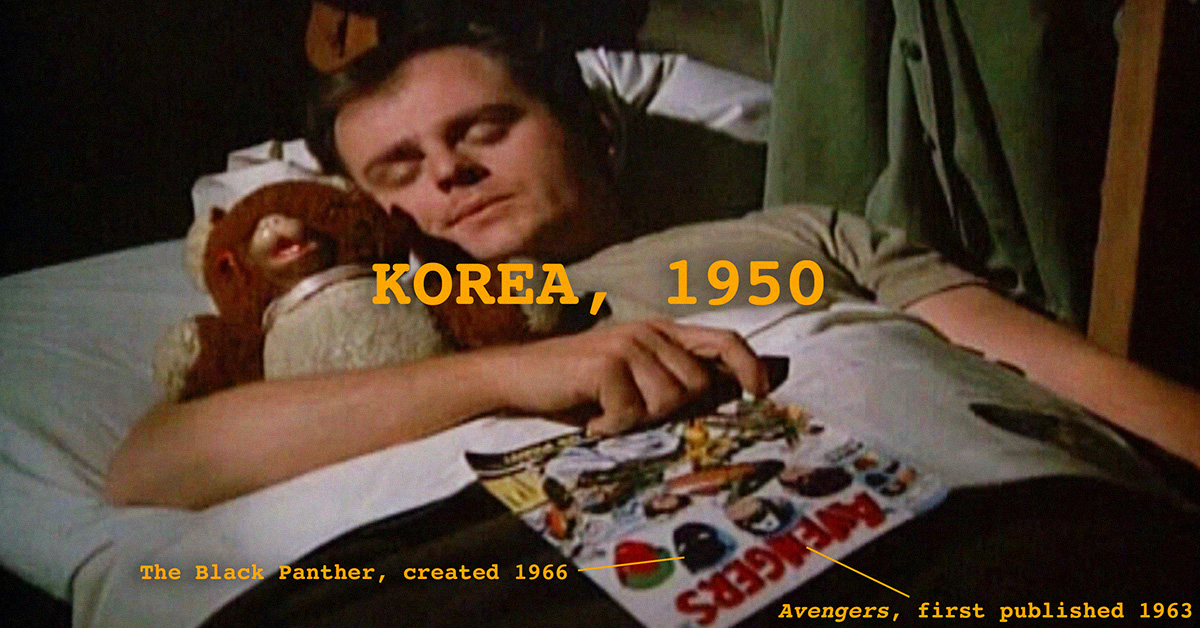 The Korean War was waged from the summer of 1950 to the summer of 1953. Few pieces of pop culture better captured the conflict than M*A*S*H. Ostensibly, the TV show was a sitcom, but it truly chronicled the emotional toll of war.

Of course, M*A*S*H was not filmed during the war. The series aired from 1972–83, and was shot in Malibu Creek State Park in sunny Southern California. While it tried to be as period appropriate as possible, some small errors slipped through. Throughout the 11 seasons, you can spot many anachronisms — a little detail, reference or prop that belongs to another era.

Anachronisms are not unique to M*A*S*H. Heck, the rifle in The Rifleman, a Western which took place in the 1870s and 1880s, was a Winchester Model 1892. In the pilot episode of The Wonder Years, which takes place in 1968, Kevin and Paul read a copy of Our Bodies, Ourselves, a book published in 1971. And just one look at Joanie's perm proves that Happy Days was made in the 1980s, not the early 1960s.

But today we're focusing on M*A*S*H. Here are a dozen little goofs you probably never noticed. 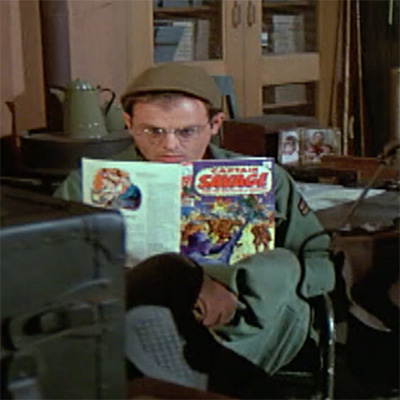 Radar is a true comic book aficionado, but the lovable geek must be personal friends with the time-traveling Fantastic Four. His collection includes issues published in the 1960s and 1970s. Here we see him kicking back and reading Captain Savage and His Battlefield Rangers, No. 10, which hit the racks in January 1969. 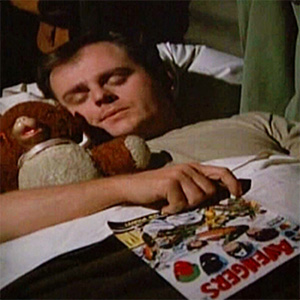 In a later episode, we see Radar tucked up with his favorite teddy bear and an issue of The Avengers. One minor problem — that comic was not created until 1963. The cover depicts the Black Panther, who first sprang out of Jack Kirby's brain in 1966. In "The Novacaine Mutiny," we see more of Radar's stash, including other issues of Avengers and Sixties-born Spider-Man. 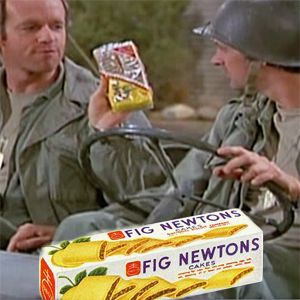 Later in "Der Tag," B.J. holds up a package of Fig Newtons, in their clear plastic packaging from the 1970s, as seen in this vintage commercial. In 1950, the popular cookies would have come in the box seen in the inset.

The 4077th gather in a tent to watch the Henry Fonda film My Darling Clemintine, an appropriate pick, as it was released in 1946. However, Radar stands up to amuse the room with his John Wayne impression. "I'm not gonna hit ya… I'm not gonna hit ya… Like hell I'm not!" he says in his best Duke drawl. Unfortunately, he is paraphrasing a scene from McLintock!, released in 1963. More evidence that Radar is in fact a time traveler.

"Baby It's Cold Outside"

The gang is gathered here to watch another movie, 1941's Sun Valley Serenade, an ice capade which starred Norwegian figure skater and film star Sonja Henie. Col. Potter notes, "This is supposed to be where she does a triple axel and ends up in a split." However, the first woman to execute a triple axel was Midori Ito in 1988. In fact, it wasn't until 1953 that Carol Heiss became the first woman to perform a double axel. 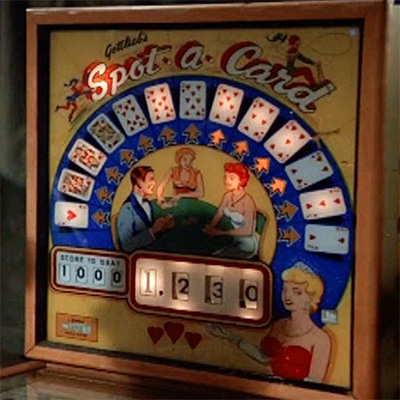 The Officers' Club at the 4077th offers an array of amusements and amenities, including the pinball game Spot-a-Card. This machine was first manufactured by Gottlieb in August 1960. 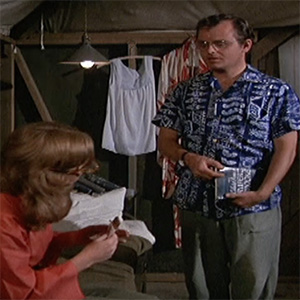 Radar, who we have established in a time traveler, again slips up and reveals himself when he mentions, "Tonight's movie is The First Born of Godzilla." However, the massive monster did not make his debut until Ishirō Honda's 1954 film Godzilla. 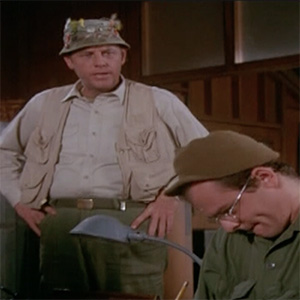 More classic monster movies are mentioned in Radar's presence in this episode. In the opening scene, Henry Blake mentions The Blob, which was released in September 1958.

9. Huey and the news 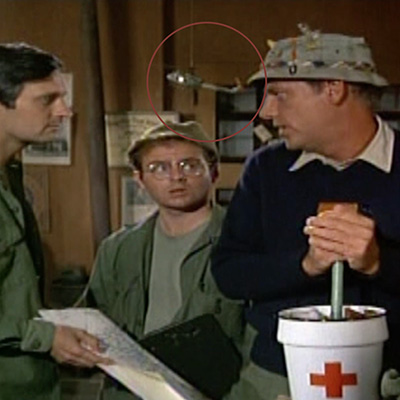 "For the Good of the Outfit"

It was not all pop culture goofs. There are some military anachronisms, as well. One subtle one can be found dangling from the ceiling in Henry Blake's office. Here, for example, we see a model Bell Huey UH-1 helicopter. The aircraft did not fly until 1956, and it is most associated with the Vietnam War. 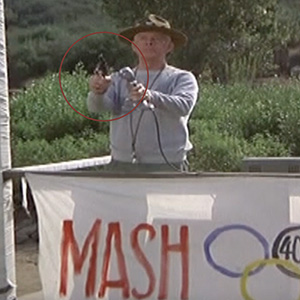 Potter uses a Smith & Wesson Model 19 snub-nosed pistol to start the crutch race. The Model 19 was not produced until the late 1950s. 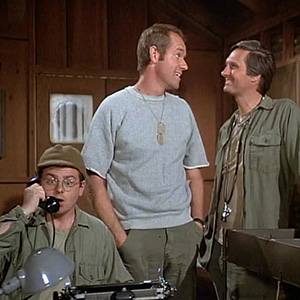 Radar spells out the name of B.J.'s father-in-law: "H-A-Y-D-E-N." Hawkeye sing-songingly adds, "M-O-U-S-E!" He is of course referencing the universally known "Mickey Mouse March," the theme song to The Mickey Mouse Club — which first aired in 1955. 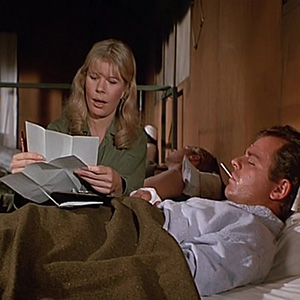 Radar is bedridden, possibly with rabies. Margaret reads him a letter, in which the writer mentions two songs, Bo Diddly's "Diddy Wah Diddy" and Gogi Grant's "The Wayward Wind," both of which were released in 1956. 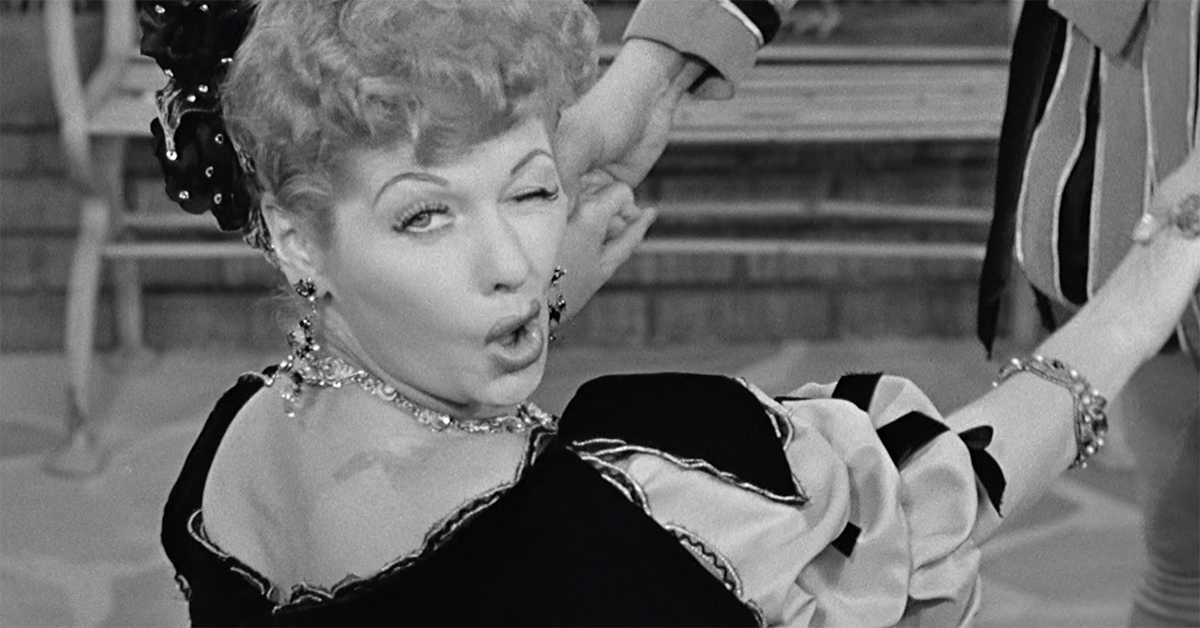 We can 'splain these minor slip-ups. READ MORE 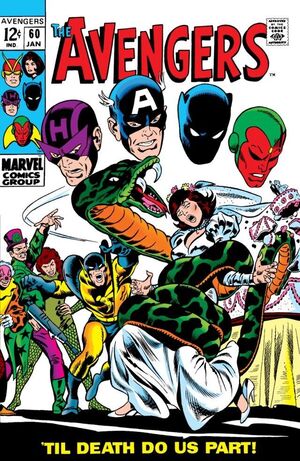 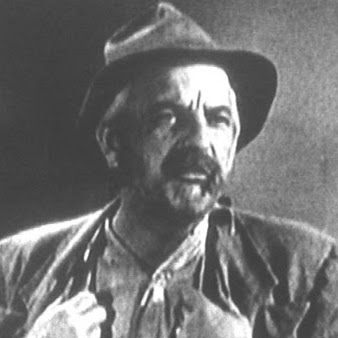 EmBee 15 months ago
Revolver hand guns look a lot alike, especially from a distance. I'm impressed that someone was able to ID the brand and model of the gun Potter uses to start events in MASH Olympics.
Like Reply Delete

CouchPotato19 15 months ago
Who the heck would notice these things?
Like Reply Delete

Connor 21 months ago
Albert Anastasia's door man...when he wasn't shot after his bodyguard left him until 1957.....Dr Charles Drew bleeding to death after being refused at a whites only hospital didn't happen either
Like (1) Reply Delete

CluBurnham 27 months ago
The picture hanging in the officers club also shows a drawing of a later model helicopter.

MrsP58 27 months ago
Not only does Radar imitate John Wayne in McLintock (1963), but I just watched the episode "Hawkeye" (S4 E19) where Hawkeye suffers a concussion. He mentioned Oklahoma (1955) and did a short imitation of Rossano Brazzi in South Pacific (1958). The writers of M*A*S*H wrote such good episodes, but did they think we wouldn't notice these things? Were they actually mistakes or tests of whether we were paying attention?
Like Reply Delete

JDnHuntsvilleAL MrsP58 15 months ago
"Were they actually mistakes or tests of whether we were paying attention? "

They were details irrelevant to the plot of the show. Remember, these shows were cranked out on a WEEKLY bases -- there just wasn't time to research every tiny detail that really had nothing to do with the plot. PLUS, all of this was missed originally because we didn't have the ability to freeze frame and slo-mo the videos so you could look at each and every frame in detail just looking for this kind of crap. It's only Millennials who have started nick-picking stuff apart.
Like Reply Delete

Ehsauve JDnHuntsvilleAL 13 months ago
you had me until the Millennials barb. People have been freezing tape and spotting goofs for a long time.
Like Reply Delete

Tim MrsP58 2 months ago
In Ye Goode Olde Days there was no Google to check things like this quickly, so writers had to rely on their memories, not to mention that with only a week or so to cook up an script there was very time and most likely little desire to double check such things.
Like Reply Delete