Thirty years later, there is still no TV show quite like this madcap cop comedy. 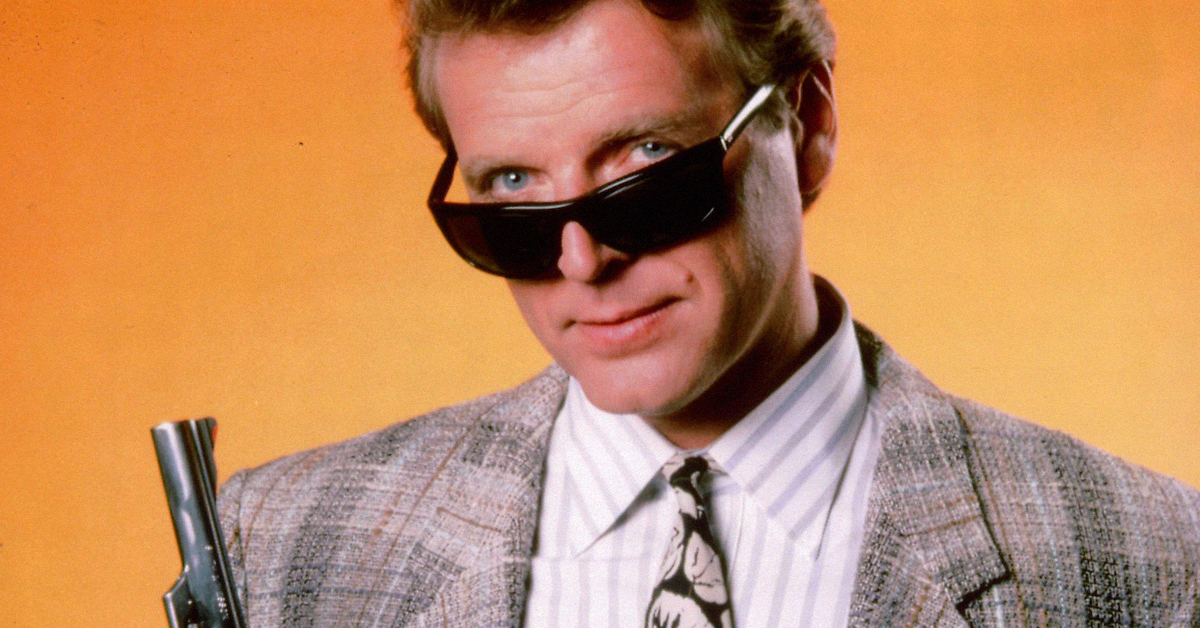 In 1971, a ten year old purchased a ticket to see Fiddler on the Roof but snuck in to watch Dirty Harry. He thought it was hilarious. Growing up on episodes of Get Smart!, the boy envisioned his own silly version of a rogue cop with a big gun.

Years later, the young Alan Spencer would finally see his concept come to fruition with his TV series Sledge Hammer! The satirical comedy poked fun at the macho action heroes of the 1980s — and all the tropes that went along with them. There was a screaming police captain, a young partner, a catch phrase ("Trust me! I know what I'm doing!") and a .44 Magnum Smith & Wesson. Inspector Sledge Hammer drove around in a giant green Dodge slapped with the bumper sticker "I ♥ VIOLENCE."

Similar to the Airplane! and Police Squad! parodies, and the godfather of zany modern shows like Angie Tribeca, Sledge Hammer! was unlike anything else on television when it premiered in 1986. It quickly developed a cult following and critical praise, but its smart, sarcastic tone — not to mention some brutal time slots — made it a tough sell. The series managed to eke out two seasons. 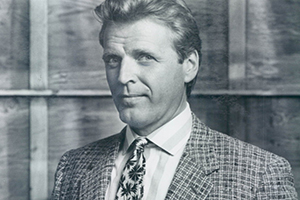 As mentioned above, Alan Spencer was a precocious Hollywood talent. At only 16, he wrote his first script for Sledge Hammer! Depite his young age, he was able to get his teleplay in front of some Hollywood people. The reaction? According to Spencer, they were "appalled." The script sat around for eight years.

2. Creator Alan Spencer sold a story to the sitcom 'One Day at a Time' while in high school. 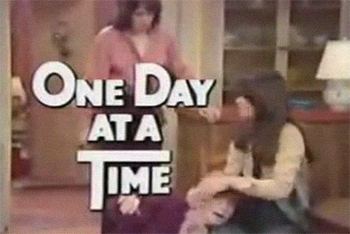 Spencer sold a story to One Day at a Time while in high school, becoming the youngest member of the Writer's Guild of America. He also wrote an episode of The Facts of Life ("What Price Glory?") in 1983 and went to work on series such as Mork & Mindy.

3. Spencer was friends with Andy Kaufman. 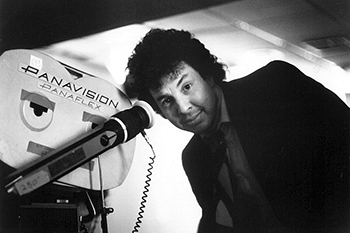 The brilliant comedian and Taxi star once invited Spencer over and subjected him to watching a 96-hour marathon of The People's Court. Kaufman's knack for blurring the line between sincerity and surrealism rubbed off on the young disciple. 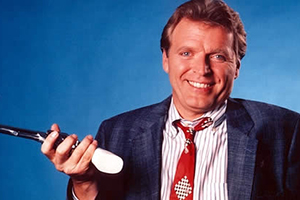 After Clint Eastwood revived Dirty Harry for the hit 1983 sequel Sudden Impact, there was renewed interest in creating a spoof of the character. HBO looked into developing a series that would blend Get Smart! and Dirty Harry. And what do you know — some kid had written just that years ago! The Sledge Hammer! script went over the heads of most execs at HBO, who wanted to shoehorn a popular stand-up comic into the role. Willing to take a risk, the last-place network ABC swept in to snag the series.

5. David Rasche was a member of the Second City comedy troupe in Chicago. 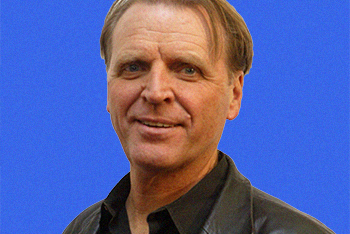 Spencer claims he had Rasche in mind for the role from the get-go, despite never seeing him work. The intellectual actor only played dumb. He was a veteran of the Chicago theater scene, having studied at the famed improvational hub Second City, as well as having starred in a David Mamet play. The University of Chicago graduate also taught English at Gustavus Adolphus College in Minnesota for a bit.

6. Peter Gabriel released his hit "Sledgehammer" just as production on the pilot was wrapping. 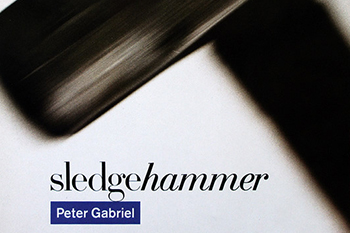 How's this for promotional kismit? Peter Gabriel's pop smash, fueled by its brilliant video, became a smash hit in the summer of '86. Naturally, the network used the song to promote its new series.

7. It replaced 'Life with Lucy' in the lineup. 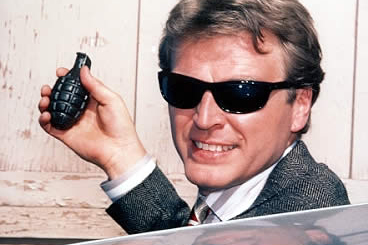 In the fall of '86, Lucille Ball attempted a sitcom comeback with Life with Lucy, a critically despised series which saw the 75-year-old comedian performing physical comedy. Only eight episodes aired. Sledge Hammer! slipped into the vacated slot.

8. The original opening showed Sledge firing his gun straight at the camera.

ABC feared the shot would give viewers heart attacks. (Though it seemed to work out okay for James Bond.) Thus, the final opening credits show Hammer firing off to the side at an angle. 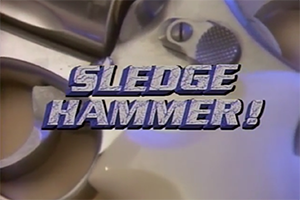 The former Oingo Boingo frontman is best known for his fantastic work on The Simpsons theme and on Tim Burton films. His distinctive whimsy and choral vocals can be heard in the driving sythnesizer piece.

10. Sledge Hammer blows up the city with a nuclear bomb in the first season finale.

The producers did not expect the series to be picked up for a second season. Which is why the last episode of season one sees Sledge Hammer setting off a nuclear warhead in a hot tub that obliterates the entire city. The final shot depicts a post-apocalyptic wasteland. No worries — things were basically back to normal in season two.

11. The show mocked the colorization trend — which caused viewer complaints. 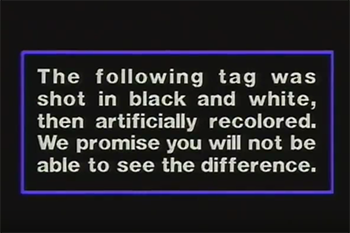 Before the final segment of the episode "Wild About Hammer," a disclaimer appears on the screen. "The following tag was shot in black and white, then artificially recolored. We promise you will not be able to see the difference," it read. Of course, the following shots shifted from color to color in a psychedelic swirl. Viewers phoned the network to complain that something was wrong with the broadcast. Try not to fall for it when it runs on MeTV. 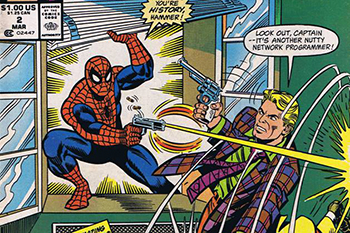 Marvel Comics printed two issues of a Sledge Hammer! comic. In the second issue, Hammer goes up again "Spider-Man." (It's not really Spider-Man.) 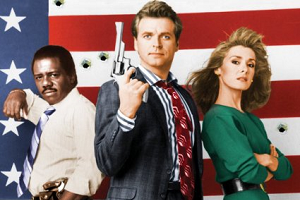 Like many other shows, Sledge Hammer! had some amusing alternate titles overseas. In France, the show was known as Mr. Gun. Germans ate up the series they called Der Hammer. In Japan, it was called Ore ga Hamā da! (I Am Hammer!), while Denmark went with For Fuld Hammer! (Full Hammer!).

Snickers 8 months ago
LOVED this show!
Like Reply Delete