Who says you can't herd cats? We rounded up bunch. 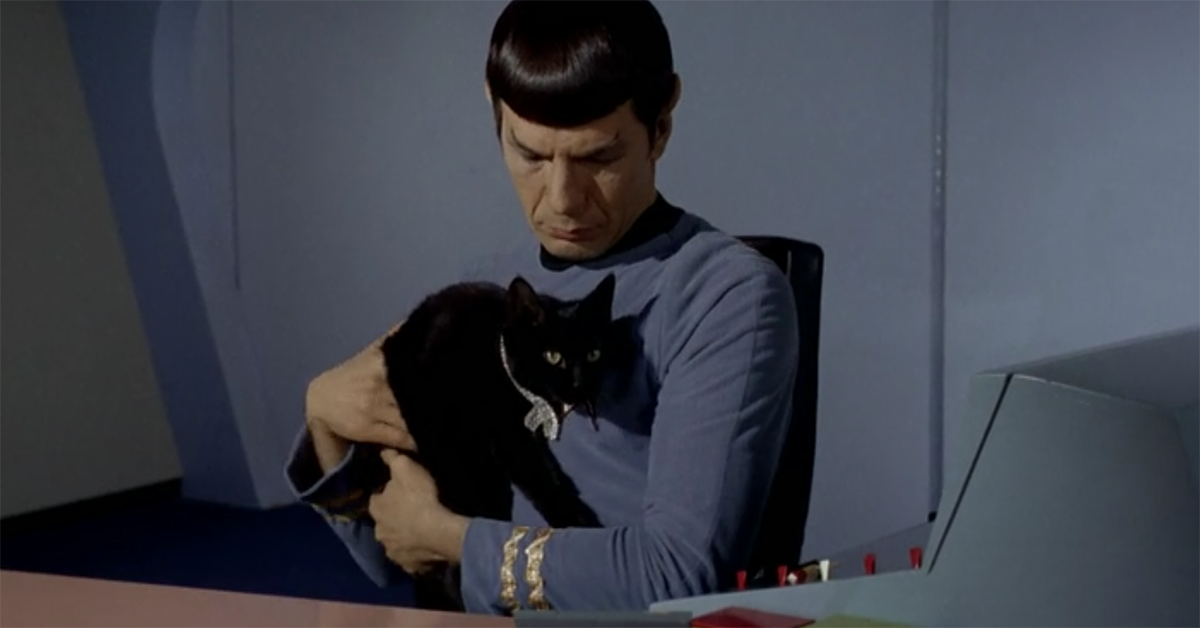 Cats. They're the stuff that memes are made of. Before felines became the backbone of the Internet, they were crawling all over television.

Sure, dogs may have been the pet of choice in family sitcoms. There was Tiger on The Brady Bunch, the shaggy dog of My Three Sons, and the dog only known as "Dog" on Petticoat Junction — who went on to become Benji!. Heck, Will Robinson had a dog and a robot.

It seemed as if the kittens were often left to the witches. That could be because the animals are harder to train.

Still, while they may have not always been major characters, cats pranced and purred their way through classic televisions shows here and there. Who says you can't herd cats? We rounded up a couple dozen of the furry friends for you cat lovers.
Can you think of more? Let us know in the comments!

1. Adventures of Superman "The Lucky Cat" 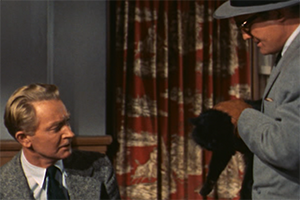 When this little fellow runs in front of Clark and Jimmy, naturally the latter is shaken. Clark, however, has no such superstition. A bad guy applies poison to the cat's claws, but Clark uses catnip to sniff out the culprit.

Orangey, a tabby, was one of Hollywood's biggest cat actors. He played Elly May's pet a couple times.

3. The Beverly Hillbillies "The Cat Burglar" 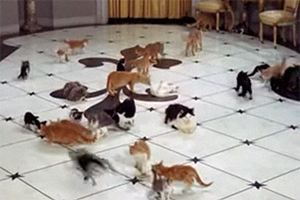 Elly Mae was quite the animal lover. When a police alert is issued for a "cat burglar" she fears for the safety of her kitties. This episode is loaded with cats, as you can see in the shot with Granny, including Orangey again, who is tucked inside a dresser drawer. More on him later.

4. The Brady Bunch "The Honeymoon"

Alas, poor Fluffy. The girls' pet was only seen in the pilot episode.

5. The Brady Bunch "Law and Disorder" 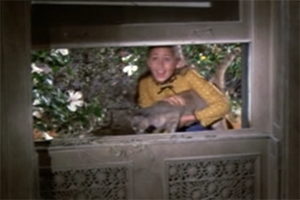 Fluffy? Is that you? Sadly, no. That is Pandora, the pet of Bobby's friend, whom he attempts to rescue from an abandoned house. The cat pretty much rescues itself.

Carla's cat has kittens — which end up all over Norm. Elsewhere, Diane's cat, Elizabeth Barrett Browning, may never appear onscreen, but the beloved pet plays a major part in the emotional episode "Let Me Count the Ways." After learning from her mother that Elizabeth has died, Diane is heartbroken. 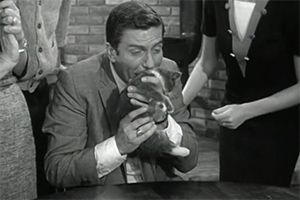 Rob starts sneezing up a storm and fears he is allergic to Laura. Spoiler alert: He is not actually allergic to his wife. Who could be allergic to Mary Tyler Moore? 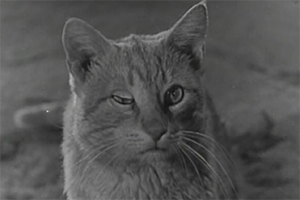 A winking cat? It was a cutting edge special effect in 1960. This feline, Harry, gives a sly wink to Donna and Alex. It could possibly be ol' Orangey again, though he is not credited. 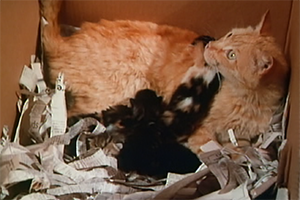 You can't have a show about rescue workers without a cat. This pregnant tabby is ready to give birth on John's bed… and does in the end. The kittens are not orange. Orangey must not have been the father.

A mad scientist switches the personalities of a cat and dog, leading to a barking feline. Yeah, Gilligan's Island got a little kooky sometimes. 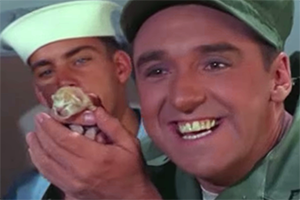 THAT IS THE TINIEST LITTLE KITTEN OH MY GOD. 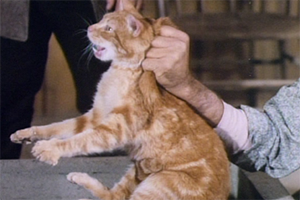 A roughnecks picks up the kitty by the scruff and threatens to drown it. Eesh. The Wild West could be cruel place. 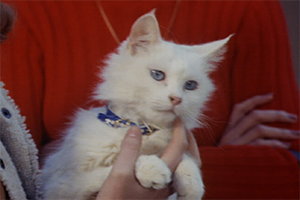 Kolchak investigates a witch in a modeling agency. The models have this white cat named Flo. 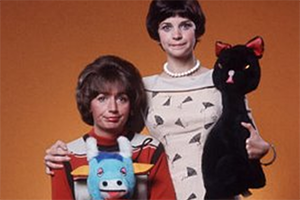 We would be remiss to overlook Boo Boo Kitty. She is not real, you say? Try telling that to Shirley. 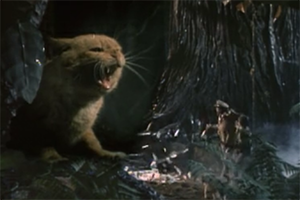 When you make a series about tiny people, you have to have them face a giant cats. That's just a rule. Sure enough, this encounter happens in the first episode of Irwin Allen's adventure. 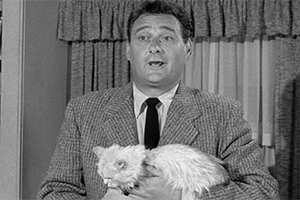 The neighbors are going away for the weekend and Beaver and Wally have been put in charge of taking care of their lawn and their cat, Puff Puff. When Eddie shows up with his dog, Wolf, chaos erupts and Wolf chases Puff Puff away. 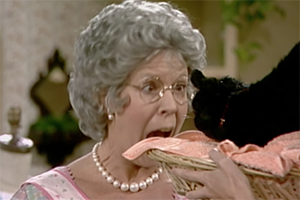 Mama's neighbor Iola Boylen is broken up about the death of her kitty, Midnight. That is, until she has it stuffed and mounted. 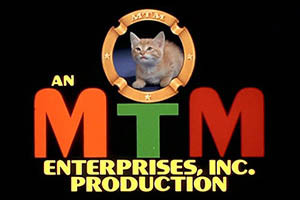 Mimsie, a parody of the MGM lion, appeared at the end of Moore's productions, her sitcom and The Bob Newhart Show. Reportedly, the kitten was adopted from a shelter and lived with an MTM staffer to the age of 20.

A mute, traumatized soldier refuses to let go of this cat. Hawkeye tries the gentle approach to separate the two — and gets put in a headlock for his efforts. 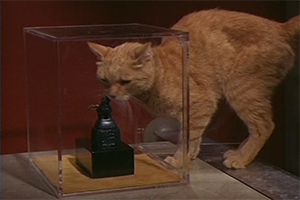 Yep, you guessed it. Orangey again. The feline star become a temporary member of the IMF named Rusty, who pairs with Barney to steal a jade artifact. Rusty does all the hard work, of course, sneaking across a, er, catwalk, opening a museum case and taking the loot. That's some acting!

21. Mister Ed "The Horse and the Pussycat" 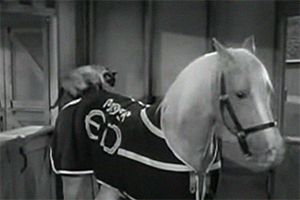 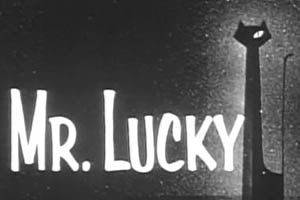 The Blake Edwards creation featured this ultra-cool, mod cat in its title logo. You can stream Mr. Lucky right here on MeTV.com.

23. My Favorite Martian "Man on the Couch" 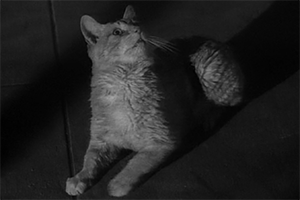 Even aliens love cats, especially Vulcans, as we will see.

24. Perry Mason "The Case of the Careless Kitten" 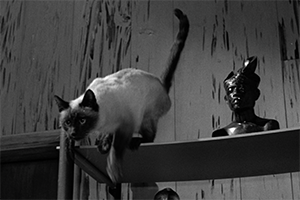 This cat is named Monkey.

25. Perry Mason "The Case of the Caretaker's Cat"

Perry Mason producers had a thing for the Siamese breed it seems. The cat has little to do with the mystery, though the titular caretaker, Hing, loves to carry it around.

26. The Rifleman "The Spiked Rifle"

This gambler has an ace up his sleeve — a kitten! 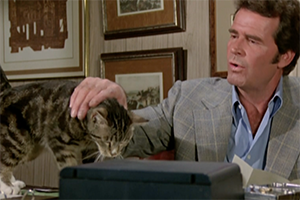 Now here's a piece of obscure trivia. According to this episode, Jim Rockford had a stray cat in his care named Valentino. Unfortunately, he only appears once. We assume Rockford still took care of it. 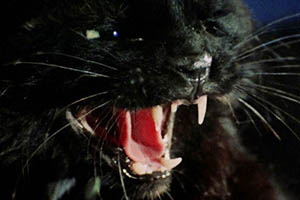 This cat is actually Sylvia, a seductive woman that Kirk naturally kisses, but is actually more of a shape-shifting space-shrimp or something. It's complicated. 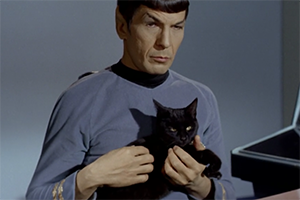 Vulcans are cold and logical, but can not resistant the soft touch of a cat. "What do you make of the cat, Mr. Spock?" Kirk asks in this second season finale. "Quite a lovely animal, Captain," he says. "I find myself strangely drawn to it." You and everyone else on the Internet, Spock!

30. Star Trek: The Next Generation 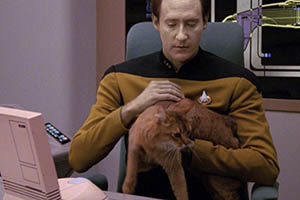 Spock wasn't the only cat lover in space. Data adored his tabby, Spot. 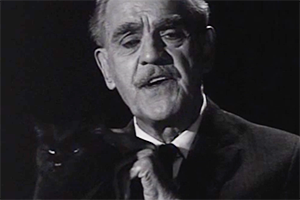 Baba, the black cat that stars in this creepy installment of the anthology series, gets a special shout out from host Boris Karloff. Frankenstein's monster did love animals, you know. 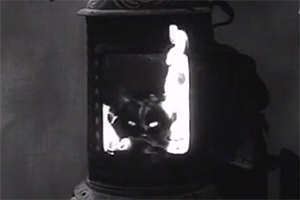 Ah! Cat in a fire! No worries, it's all part of this haunting tale about a witch. When a painting of the witchy old woman is thrown into a stove, this apparition appears. Spooky! Especially considering the painting was originally of Ursula Andress.

33. Aren't we forgetting someone? 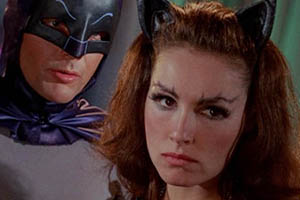 Oh, yes! And who can forget Julie Newmar and Eartha Kitt on Batman? We'll let you claw it out over who was the better Catwoman.

Did you know?
8 TV locations you can visit in real life
Are you sure you want to delete this comment?
Close