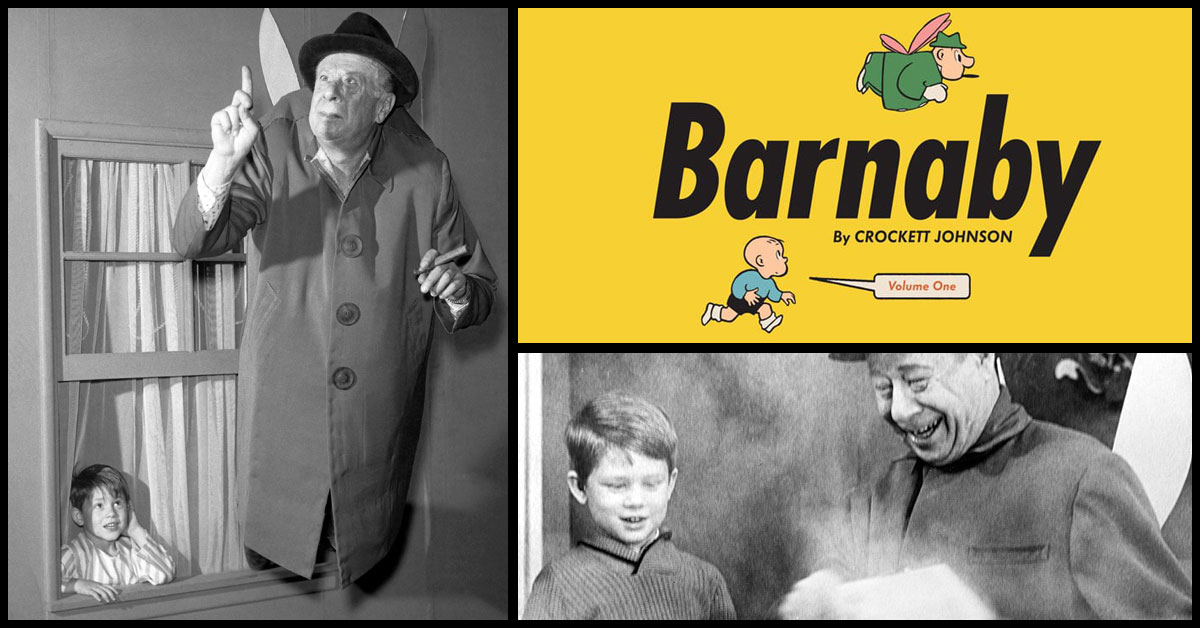 Crockett Johnson began his art career illustrating communist publications and ended it making mathematical abstract paintings, but in between, he created two enduring, adorable cartoon kids. The most widely known is Harold, the imaginative four-year-old with a magic crayon in Harold and the Purple Crayon (1955). But more influential, perhaps, was his earlier creation, Barnaby.

Barnaby, a comic strip about a cute five-year-old with a fairy godfather, first appeared in 1942 in the pages of PM, a leftwing newspaper funded by Marshall Field III that also featured the work of Dr. Seuss. Barnaby would later heavily inspire Charles Schulz's Peanuts and Bil Keane's Family Circus. You can see that in the similar look of the toddlers.

But even at the height of its popularity, Barnaby only appeared syndicated in a few dozen newspapers around the country. In comparison, Blondie could be found in more than 800 papers at the time. Still, the strip proved popular enough to spawn a stage adaptation, Barnaby and Mr. O'Malley, which played in East Coast theaters in 1946.

That's just what happened in season eight, on December 20, 1959, with "Mr. O'Malley." The holiday-season episode adapted Barnaby and Mr. O'Malley for the small screen and gave audiences a chance to see Barnaby in the flesh. If it seems odd that the production would confusingly swing the spotlight onto Mr. O'Malley, that was likely because a bigger star portrayed the character. Bert Lahr, beloved from his role as the Cowardly Lion in the Wizard of Oz, played the guardian angel in the raincoat and wings.

CBS had hopes to turn this pilot episode into a sitcom, Barnaby and Mr. O'Malley. The actors were locked in for the possibility.

In hindsight, the little boy is more notable. The show cast a five-year-old to play the five-year-old Barnaby. Finding a kid that age who can act and carry a story can be a challenge. Fortunately, they cast "Little Ronny Howard."

"Little Ronny Howard is cute as Barnaby," a critic wrote in the TV Key Previews column, "and you'll undoubtedly recognize the voice of Mel Blanc as McSnoyd the invisible leprechaun."

"Ronny Howard has been professional since he was two years old," The Tribune wrote. "He first appeared with his parents, Mr. and Mrs. Rance Howard of Burbank, Calif., in the Baltimore, Md., Hilltop Summer Theater production of 'The Seven Year Itch,' when his father was the resident director there."

So the boy was three years deep into his acting career at that point. Which is why other Hollywood power players had eyes on the youngster.

Producer Aaron Ruben placed a second hold on Ronny for his upcoming The Andy Griffith Show. (This according to his dad, Rance Howard himself.) He gambled that CBS would not pick up Barnaby as a series — and he was right. So, he got Ronny for his Opie.

"I remember going in and meeting Aaron Ruben and for some reason, he said, 'How tall are you?'" Ron Howard recalled. He didn't know how tall he was, but he could stand under Ruben's desk. So he stood under Ruben's desk. "We'll just measure my desk later," Ruben said. But Howard did not remember anything like an audition for The Andy Griffith Show, according to the podcast Two Chairs No Waiting.

Apparently, Barnaby was all they needed to see. 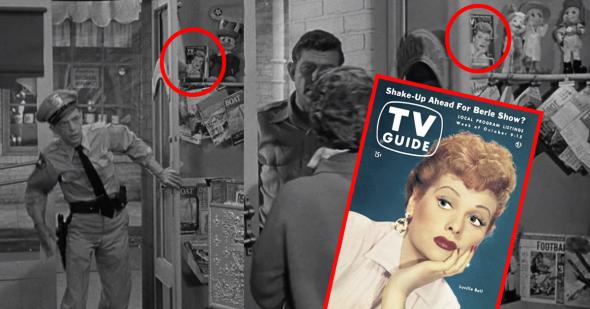 did you know?1960s1950sMayberry
The same TV Guide issue with Lucille Ball kept popping up on The Andy Griffith Show

Westerns1960s1950sMayberry
Can you recognize Andy Griffith Show characters in Westerns?

Did you know?music1950sAndy Griffith
Andy and Rafe sang together on Broadway long before they knew each other in Mayberry
Are you sure you want to delete this comment?
Close

olhester 14 months ago
Barney was definitely the character of the show. No wonder Andy only allowed him to have one bullet and he had carry it in his shirt pocket.
Like Reply Delete

Mike 14 months ago
Just So You Know:

Fantagraphics Books has been publishing a complete reprinting of the original Barnaby comic strip, in a handsome (but ungodly expensive) hardcover edition.
So far, there are four volumes, covering the years 1942 through 1949.
One more volume is expected, to bring Barnaby to its conclusion in 1952.
The books contain extensive glossaries, explaining the various topical and satirical references, for the benefit of 21st century readers (and more than a few 20th century readers) who'll need the explanations.
It's FUN!
It's HISTORY!
It's AMERICA!

WordsmithWorks 14 months ago
I wonder why it was important for writer to mention the papers were "liberal" and "leftwing."
Like (1) Reply Delete

Or drag a file here to upload
LoveMETV22 14 months ago
Interesting story with info on pre- TAGS on Ron Howard. Thanks MeTV. Glad we had Opie and Richie too.
Like Reply Delete

Andybandit 14 months ago
Nice story. Even though I never heard of Barnaby. I am glad they didn't use him in the comic strip. He was so good in TAGS. Now look at Ron Howard. A very successful director.
Like Reply Delete

Zip 14 months ago
Btw, nice shout out to the "Two chairs, no waiting" podcast, run by Howard the barber impersonator, Allan Newsome. A really nice guy too.
Like Reply Delete

Zip 14 months ago
Never heard of Barnaby, and it is a good thing they never made it into a series, otherwise we may never have heard of Ron Howard. Well, we probably would have at some point, but not from the popular Andy Griffith Show which gave him star recognition.
Like Reply Delete

Peter_Falk_Fan 14 months ago
Seeing that picture of "Barnaby" reminded me of "Henry". I used to read "Henry" in the Sunday Comics when I was a little boy. I never read "Barnaby".
Like (1) Reply Delete

MrsPhilHarris Peter_Falk_Fan 14 months ago
I remember Henry too.
Like (2) Reply Delete

cperrynaples MrsPhilHarris 14 months ago
Yes and 2 things always annoyed me: Why was he bald and why was he wearing shorts in the winter...LOL!
Like (1) Reply Delete

Moody cperrynaples 14 months ago
He also didn't have a mouth. That was very weird.
Like Reply Delete

RufusR Peter_Falk_Fan 14 months ago
A person didn't really "read" Henry since he never said a word as far as I can remember, but I read/looked at Henry for years.
Like (1) Reply Delete

cperrynaples 14 months ago
Another article written very lazy! They say the comic strip was popular but it only appeared in a few papers! They seem to suggest in the headline that politics was a factor, but they don't expand on it! Really, they should let the fans write the stories, not stupid millenials who don't know what they're talking about!
Like (1) Reply Delete

MrsPhilHarris cperrynaples 14 months ago
Now, now it’s a short article for a retro tv channel not an editorial for the Washington Post. I’m just glad METV provides articles and quizzes. I’m sure the writers have lots of other duties besides writing these articles.
Like (2) Reply Delete

wyo307pink cperrynaples 14 months ago
Why on earth would you call an entire generation ‘stupid’ ? Uncalled for. Don’t group people together like that. I’m Generation X with no children. And I gave that personal information so you wouldn’t consider me ‘stupid’ 😳🙄 as well
Like (1) Reply Delete

Runeshaper 14 months ago
I don't know if I've ever seen Bert Lahr in anything besides the Wizard of Oz, but I wish the Barnaby show would've taken off. Mel Blanc is champ and with Ron Howard, I would've definitely given it a try (-:
Like (2) Reply Delete

cperrynaples Runeshaper 14 months ago
I'm old enough to remember his potato chip commercials and his final film The Night They Raided Minsky's!
Like (1) Reply Delete