There may not be Tattoo, but there will be blood.

Fantasy Island certainly was something. An island, run by the mysterious Mr. Rourke, promises to make even your wildest fantasies come true… but be careful what you wish for. Mr. Rourke, played by Ricardo Montalbán, may or may not have been magic. Montalbán himself said that he considered Mr. Rourke to be an angel cast down from heaven, tasked with guiding souls through purgatory. 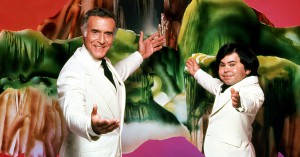 Did you know?
10 fantastic facts about 'Fantasy Island'

The show, created by Aaron Spelling (who also gave us Charlie's Angels and The Love Boat), ran from 1977 to 1984 and had dozens of guest stars, including Florence Henderson (The Brady Bunch) and Don Knotts (The Andy Griffith Show).

The show is most frequently remembered by fans as fun, if not a little goofy, escapism. Which is why when Blumhouse announced it would make a reboot of the show as a 2020 horror movie, it raised some eyebrows.

Blumhouse is most commonly known for producing scary movies, like Get Out, Paranormal Activity, and The Purge. People wondered what kind of tone the movie would take, especially when it was announced that while the character of Mr. Rourke would return (played this time by Michael Peña, who also played Frank "Ponch" Poncherello in the hard-R 2017 CHiPs reboot), they were not going to include the character of Tattoo.

Tattoo, played by Hervé Villechaize in the original, gave the show its iconic cry of "Ze plane! Ze plane!"

Well, wonder no more — we've finally got a trailer. And there is a sort of Tattoo-like character. Take a look.

Like people were guessing, Blumhouse has given Fantasy Island a dark, horror treatment. The movie is scheduled for release on Valentine's Day. So romantic.

What do you think of the twisted new look at the island?

newsreboots
Lynda Carter is reportedly returning to the role of Wonder Woman once again
Are you sure you want to delete this comment?
Close

UnicornPrincess 30 months ago
I'll probably give it a try; when you think about it, it is the perfect setting for something to go horribly wrong...
Like Reply Delete

MichaelFields 30 months ago
This looks GREAT, I can not wait, I love it when they do a new take most of the time, like when they took a campy Battlestar Galatica and made it a serious show, and a childs show like The Banana Splits into a horror movie, (It was not too bad and it took a different idea for the splits I was not expecting) I STILL and wanting and waiting for a Buck Rodgers remake, I would be first in line for that
Like Reply Delete

DarrylHeine 30 months ago
First the Banana Splits turned from 1968-1970 kid show stars to a horror movie, and now this?
Like (1) Reply Delete

MichaelFields DarrylHeine 30 months ago
Did you SEE it? It is pretty interesting on the take they take of it, its not what you think. And it was not too bad
Like Reply Delete

RobCertSDSCascap MichaelFields 30 months ago
Wow. From theaters to DVD in 2 weeks. Talk about a bomb!!!
Then, on SYFY for free. That's what happens
when you void your bowels all over a classic live-action,
cartoon show!
Like Reply Delete

BrittReid 30 months ago
This will sink faster than a rock.
Like (1) Reply Delete

DavidBartholomew 30 months ago
Fantasy Island already was rebooted once as a TV show. Failed to critical jeers.

You would think they would learn
Like (2) Reply Delete

OutriderSmith 30 months ago
Looks to me like yet another 'remake' starring actors who appear as if they are barely out of puberty. Set to become yet another out-of-sight/out-of-mind film, using a beloved classic simply because of its namesake to attract viewers, from a movie industry run by people who themselves have yet to grow a single crotch hair and even if they do, they shave it right off, with no thought to the maturity of the original material whatsoever. Anything for a quick buck. This time the victim is Fantasy Island. Sad.
Like (3) Reply Delete

Gary 30 months ago
Amen. I was thinking the same thing
Like (3) Reply Delete

RobCertSDSCascap 30 months ago
Another studio takes a dump on a classic show.
I won't watch it!
Like (2) Reply Delete