Fans had to like Lori Beth, because "Richie wouldn’t go with a girl who wasn't a nice person." 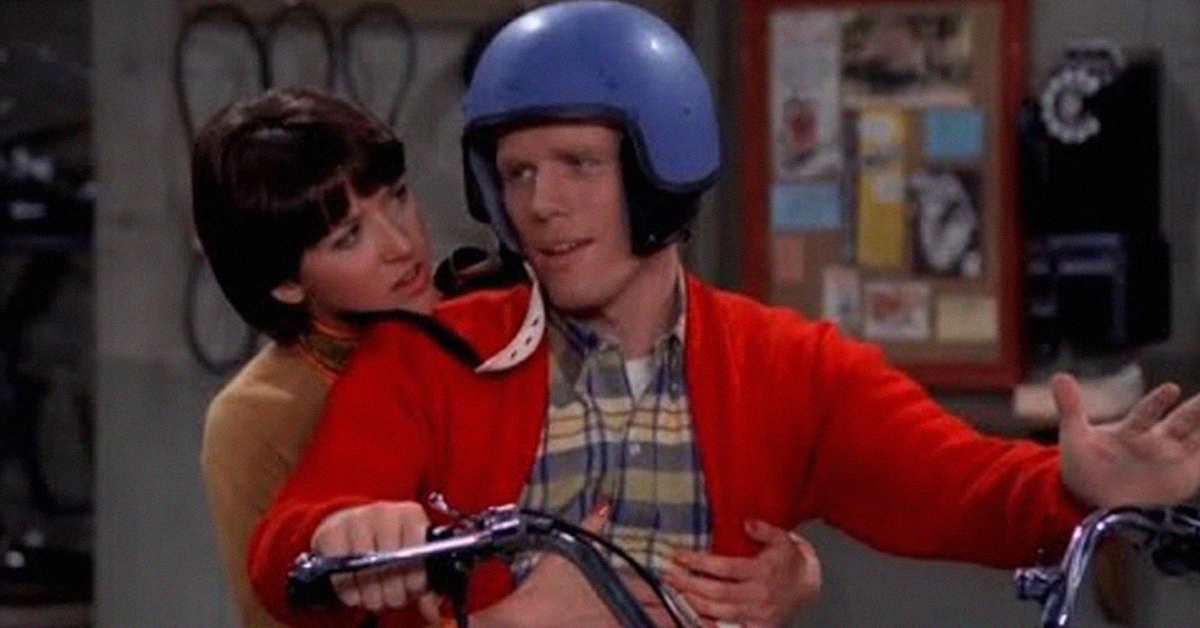 When Richie Cunningham crashes his new motorcycle while riding with his steady girlfriend Lori Beth on the back, she ends up injured, wailing for help, and he ends up in a hospital bed, sunk in a coma.

I think we can all agree this was not a very happy day in the history of Happy Days when "Richie Almost Dies" in the 1978 episode. At one point, Fonzie becomes so distraught, he starts sobbing as he prays for Richie's recovery, telling the Big Guy, "I can fix a lot of things, but, um..… this one is all Yours."

This was serious, and fans watching were just as concerned.

For Lynda Goodfriend, the actor who played Richie's girlfriend Lori Beth, episodes like this one proved to the whole cast how much audiences truly loved Ron Howard, a child star they had watched grow up.

Goodfriend told The Daily Herald in 1979 that due to Howard's massive audience appeal as Richie Cunningham, she had to completely reimagine the way she approached playing his girlfriend.

"It's hard being the girlfriend of America's sweetheart," Goodfriend admitted. "You have to be a good person. You have a fight with him, and you can't be mean. Yet, you still have conflict."

This put Goodfriend in an awkward position, where she needed audiences to approve of her as Richie's girl, but she also needed to sometimes disagree with her main squeeze, without everyone always siding with Richie.

She found a creative way to convince everybody watching that she wasn't the bad guy in every fight.

"Richie wouldn't go with a girl who wasn't a nice person," Goodfriend said. "So I change the idea from being angry to being confused."

Her plan worked, of course, and audiences grew to love Lori Beth as Richie's one and only.

When Goodfriend first got cast as Lori Beth, it was because Howard was campaigning for Richie to finally have a steady girlfriend. He felt it was important that Richie had someone else to relate to, other than Fonzie, Potsie and Ralph. Or, you know, his parents. 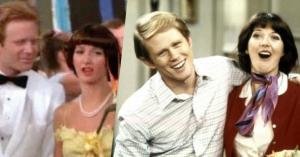 In 1978, there was no expectation on-air yet that Richie and Lori Beth would eventually wed, but Goodfriend hinted that year that chatter about wedding bells might be ringing behind the scenes.

"There's talk about us getting married," Goodfriend said. Then she joked, "We could have a kid and name him Opie."

Goodfriend said growing up, she loved watching Howard play Opie on The Andy Griffith Show, but that she didn't have a crush on him or anything. Their chemistry came later.

"Have you ever thought you'd be kissing Opie?" she joked.

She ended up getting the part of Lori Beth after meeting Garry Marshall randomly in New York. That night, she only caught his first name and didn't realize what a big deal he was in TV. So, when she moved out to California, she called him up, but she didn't expect to walk into any plum roles.

"I worked as a waitress until 3 in the morning for about six months," Goodfriend told The Tampa Bay Times in 1979. "And then I got my first job, which fortunately was Happy Days, which was a hit."

Acting with Howard, Goodfriend said, was a dream. "He was wonderful," she said.

Joining the show gave her a chance to be part of something special, and she said after the show ended, she was offered plenty of similar roles to Lori Beth, but nothing that reached into hearts the way Happy Days did.

"Happy Days is a story about love — of your family, of your friends — and the importance of goodness, values," Goodfriend said. "There's a very fine line between being corny and sincere, and Happy Days stays on the sincere side."

Offscreen, Goodfriend was down-to-earth in many ways and adventurous in others, appreciating being in nature, more than being a celebrity on a hit show.

One of her favorite things to do when not filming was mountain climbing, and she said, dangling from a cliff about 19,000 feet in the air, she didn't have to worry about the pressures of being the perfect girlfriend to America's sweetheart. 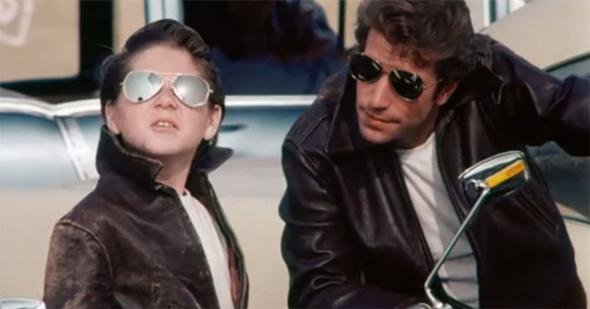 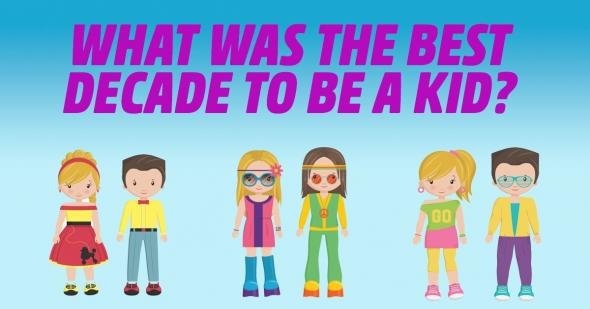 Nostalgia
PICK: What was the best decade for being a kid?

LarryAJacobsen 7 months ago
When she became a regular cast member the opening credits showed a picture of her with a different hairstyle, more like Jenny Piccolo, so when the closing credits would say that was Cathy Silvers I'd would wonder "well who the heck is Lynda Goodfriend?"
Like Reply Delete

Wiseguy 15 months ago
Seems odd that a male actor is called "America's Sweetheart."
Like Reply Delete

manofawholebunchofvoices 15 months ago
I have been watching a lot of Happy Days on MeTv lately and I have given this a lot of thought. There is no show in television history that dropped in quality as dramatically as Happy Days did. Those first two seasons were truly wonderful. It really gives you a feeling of living in the 50s. So many great episodes, the bomb shelter episode is exceptionally well written. The Christmas episode where Richie finds Fonzie eating ravioli out of a can in the garage on Christmas eve is my favorite Christmas episode of ANY show ever. So moving and the acting by the entire cast could not be more perfect.
Last night I watched an episode from a much later season that took place on Halloween and some nutty old woman put a curse on Al and Fonzie came to the rescue and she tried to put Fonzie under a spell by twisting a doll of Fonzie. It was just an embarrassingly awful 22 minutes of television. How fitting the term "Jump the shark" comes from Happy Days.
I actually wish MeTv would just show the first three seasons over and over rather than show what became of this once wonderful series.

PSF65 16 months ago
"Happy Days is a story about love — of your family, of your friends — and the importance of goodness, values," Goodfriend said. "There's a very fine line between being corny and sincere, and Happy Days stays on the sincere side."

Whilst one should not get too far into nostalgia which cannot be re-produced, this quotation sums up very ably, something that is no longer with us in today's world.
Were the fifties, sixties and seventies all that bad????
Like Reply Delete

Wiseguy BillO 15 months ago
Of course not. Sen. Joe McCarthy's Communist witch hunts, numerous assassinations, the need for bomb shelters etc. were just walks in the park.
Like Reply Delete

top_cat_james_1 16 months ago
Richie was always hitting on other women after he and Lori Beth began dating.
Like Reply Delete

AlF 16 months ago
They were not in love. She was just a goodfriend...
Like Reply Delete

Grant37 16 months ago
Does MeTV have all the Happy Days episodes on demand? They just seem to play the same handful of episodes over and over again.
Like Reply Delete

PSF65 Grant37 16 months ago
I noticed that as well. This is also happening on some U.K. TV series where they simply jump from one series to another. This is disgusting and the TV stations are simply treating the viewers as idiots.
Pressure should be applied to the sponsors!!!
Like Reply Delete

MrsPhilHarris 16 months ago
Didn’t she marry Potsie in real life?
Like Reply Delete

LoveMETV22 16 months ago
I always liked Lori Beth. She was a good fit as Richie's girlfriend.
Like Reply Delete