"A Night at Rosie’s Bar" required a full day of shooting and a whole lot of pretzels. 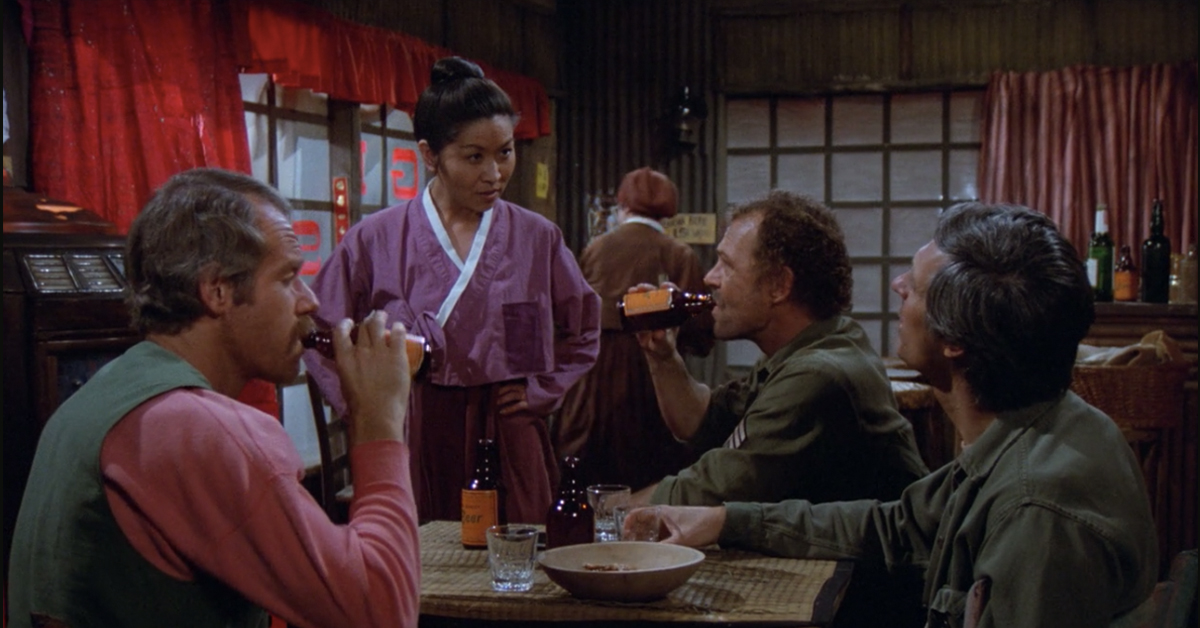 On M*A*S*H, Rosie’s Bar was designed as tribute to Rose’s Bar, a waterhole that soldiers really did frequent in Seoul during the Korean War.

Portraying scenes in Rosie’s Bar on the series required just as much authenticity as the rest of the show, but hardly anyone ever talks about how much effort M*A*S*H put into recreating Rosie’s Bar.

In 1979, The Detroit Free Press provided a rare look behind the scenes of the seventh season episode "A Night at Rosie’s."

In the episode, Hawkeye refuses to leave Rosie’s as an act of protest, drawing the entire cast into the bar.

To make this episode, the actor who played Rosie, Eileen Saki, was the first one called to set. She arrived at 7:30 a.m. for makeup. 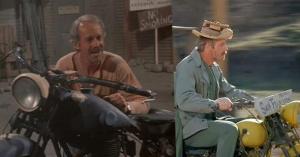 Did you know?
Mike Farrell loved motorcycles even more than B.J. Hunnicutt

Setting up the scene, M*A*S*H director Burt Metcalfe kept distractedly eating from a bowl of pretzels in the bar, and if you pay close attention watching the episode, you’ll notice the bowl gets emptier and emptier due to this nervous snacking.

While the bar setting and lighting was finishing up, actors Alda, Farr, Saki, and guest star Joshua Bryant huddled, going over lines. This huddle session lasted almost an hour and helped the cast tweak their comedic timing of lines and physical comedy, like one suggestion to Saki to keep her hands busy.

Once filming started, nothing could prepare the cast for the grueling day at Rosie’s, though. There was so much going on in these scenes, it was easy for something to go wrong each take.

There’s a point in the episode where Alda calls for Rosie to bring another drink and Rosie cracks a joke, "Everybody’s drinking; anybody paying?"

Alda flubbed his next line, and Metcalfe called cut, then nervously ate some pretzels.

Another time Saki was moving too fast and shattered a beer bottle.

The pretzel bowl got hit hard again, as Metcalfe stopped to restage the shot.

Other disruptions to shooting included some pesky coins that Klinger had in his kneecaps. They kept falling out at the wrong time and ruining the take.

With salty snacks to get him through it, Metcalfe would just call, "Okay, let’s try it again."

This stop-and-go stretched on all day, with shooting on “A Night at Rosie’s" actually stretching into the night and filming ending at 8 p.m.

For Rosie actor Eileen Saki, that "night" at Rosie’s took more than a 12-hour day!

At this point in M*A*S*H’s run, opportunities to watch episodes be filmed were the hottest tickets at 20th Century studios. M*A*S*H filming drew more tourists than even Charlie’s Angels.

But this 1979 reporter’s trip to watch "A Night at Rosie’s" being filmed provides a rare glimpse behind the scenes of Rosie’s Bar, preserving the memory of how much effort the cast and crew put into getting these scenes right.

And because M*A*S*H chose to incorporate Rosie’s Bar as a recurring setting, the show helped preserve the memory of the actual Rose’s Bar, which some say otherwise would’ve faded from memory forever. 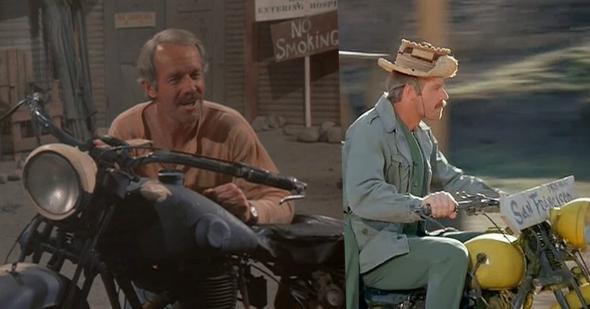 Did you know?
Mike Farrell loved motorcycles even more than B.J. Hunnicutt 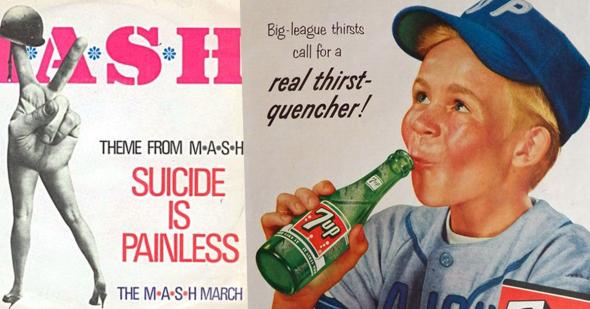 Did you know?
The teen boy who co-wrote the M*A*S*H theme song once got a response to his message in a bottle
Are you sure you want to delete this comment?
Close

BrianThetubewatcher 6 months ago
The Rosie’s episode was about the universal need to rebel and skip out once in a while. It goes beyond the war situation into general 20th Century life, as M*A*S*H overall did in the later seasons.
Like Reply Delete

LoveMETV22 8 months ago
Well back to M*A*S*H on Sunday nights, Oh well. It was fine when they moved it to 5 nights when Monk was added. I wonder if they'll run their old M*A*S*H 6 nights a week commercial again?
Like Reply Delete

JosephScarbrough 8 months ago
It should be noted that this episode was written literally at the last minute. Season 7 was originally going to end with Radar's farewell episode, but the network decided to instead have Season 8 build up to Radar's 2-part departure. Because Season 7 was now short one episode, Ken Levine & David Isaacs wrote "A Night at Rosie's" over a weekend and brought the script in the following Monday to start filming. This is also one of the reasons why the entire episode took place inside Rosie's Bar, it was simpler, quicker, and cheaper to film inside just one set; usually when TV shows do such episodes (TV Tropes calls them "Bottle Episodes," while Garry Marshall calls them, "'Stuck in a' Episodes"), it was specifically to try to save money, since minimal settings mean minimal budget spending.
Like (1) Reply Delete

Pacificsun JosephScarbrough 8 months ago
Do you think they had an eye our for splurging on the finale (and leading up to it). Just curious.
Like Reply Delete

Pacificsun JosephScarbrough 8 months ago
Watching for the number of re-sets in a lot of different adventure/action series is interesting too. For example Wild Wild West had a lot of elaborate sets, particularly because the partners were usually divided through episode, until they came together for a resolution. It's like they had to build twice as many, given both characters. Although they used the train a lot as a fall back.
Like Reply Delete

LoveMETV22 JosephScarbrough 8 months ago
Seems more like the Networks decision to push up Radars departure to the next season was last minute and they had to scramble for an episode to fill it. A single set made sense for the episode for staging, filming, but money and budget wasn't the motivating factor as Twentieth Century Fox, the production company said "M*A*S*H" accounted for a quarter of its revenue". at the time.
Like Reply Delete

AndrewDouglass 8 months ago
Many didn’t realize it at the time but it was a show created by the left to inculcate anti America sentiment.
Like Reply Delete

bdettlingmetv AndrewDouglass 8 months ago
Even less people realized that the show was dreamed up by the tin-foil hat brigade to give themselves fodder to feed their fears and be able to say, "I told ya so!" for decades to come.
Like Reply Delete

dangler1907 AndrewDouglass 8 months ago
You're seriously confused. The author of the novel that the original movie and then the TV show were based on was a conservative, not a liberal. And nobody who has served in a military medical unit can be anything BUT disgusted with the terrible waste of war.
Like (5) Reply Delete

Pacificsun dangler1907 8 months ago
You're a doctor patching up casualties. When did they ever say, hey we don't have enough. Maybe our side isn't trying hard enough.
Like (3) Reply Delete

BrianThetubewatcher AndrewDouglass 6 months ago
Are there any conservatives with a brain in their head? Or anything in there to stop them from falling for every Fox and newsmax lie?
Like Reply Delete

CaptainDunsel 8 months ago
"At this point in M*A*S*H’s run, opportunities to watch episodes be filmed were the hottest tickets at 20th Century studios."
M*A*S*H hadn't yet taken off like a bottle rocket in late '72 or early '73 when I managed to get onto - and then thrown off of - the M*A*S*H soundstages at 20th.
Like Reply Delete

CaptainDunsel KJExpress 8 months ago
In 1971 my father was working with Irwin Allen on a project which (literally) never got off the ground - an adaptation of Martin Caidin's novel "Almost Midnight". I got to know Allen's executive assistant, and for years afterward she would occasionally get this high school sophomore gate passes at 20th, where Irwin Allen Productions was housed.
On one such "field trip" a friend of mine an I wandered onto one of the soundstages with the M*A*S*H sets, and watched them do setups. When lunch was over and the cast began to assemble, we got bounced because they were doing closed set shooting. (Probably one of the shower scenes, but that's just a guess.)
During that same studio visit my sister managed to get herself accidentally locked onto the soundstage for "Room 222" at the end of the day, because no one noticed she was there.
Like (2) Reply Delete

KJExpress CaptainDunsel 8 months ago
Wow, what cool experiences. They may not have seemed that way at the time, especially for your sister (yikes!), but from my point of view, being so far away from those sorts of opportunities, they are definitely cool. I wish I had been able to experience something like that. I wouldn't be the least bit interested in doing that now, but to have seen a favorite show being filmed would have been neat.
Like Reply Delete

Pacificsun CaptainDunsel 8 months ago
How fun, and just the right age for having it! It might've been a shower scene (or not). Nobody had to be naked (unless they wanted to be). Easier to close a set for any shooting just to limit one more possibility of a distraction. Certain types of guest stars don't want to be bothered either.
Like Reply Delete

Pacificsun CaptainDunsel 8 months ago
Being in LA itself you couldn't have gotten any luckier! In the day, ours was a convenient alternative, time and budget wise. Plus ours fell over backwards to accommodate the logistics and supported taking over the unused pier buildings turning them into stages. Somebody could take off from school or work anytime during the season to catch the location filming.
Like Reply Delete

CaptainDunsel Pacificsun 8 months ago
I remember taking some time off from school to wander over to Century City and watch them filming "Conquest of the Planet of the Apes".
Like (2) Reply Delete

Robertp 8 months ago
I was late to My own wedding because I was watching MASH. Reflecting back, I should’ve stayed for the finale.
Like (3) Reply Delete

LoveMETV22 8 months ago
Like M*A*S*H. Maybe a few episodes that didn't make 100% sense, but a good show on the whole.
A great group of actors. An Alan fan, as welll as the other actors.
Like (1) Reply Delete

LeeTurner 8 months ago
I love MASH
Happy Thanksgiving everybody

ERROL Andybandit 8 months ago
We had a "Rosies" bar in Phu Hep '68.
Don't think it was as big as MASH
Like Reply Delete

WordsmithWorks 8 months ago
Didn't really care for this episode. Disliked the Scully character in any episode. Plus, Potter NEVER would have put up with this. Tying Winchester up, the whole surgical staff (doctors and nurses) getting drunk, not reporting when ordered. No way.
Like (5) Reply Delete