Ted McGinley found his true love not at Al's Diner, but at Burt Reynolds' dinner theater

"Strange things happen down here at this theater," Burt told Ted in 1988, accurately forecasting marriage in McGinley's near future. 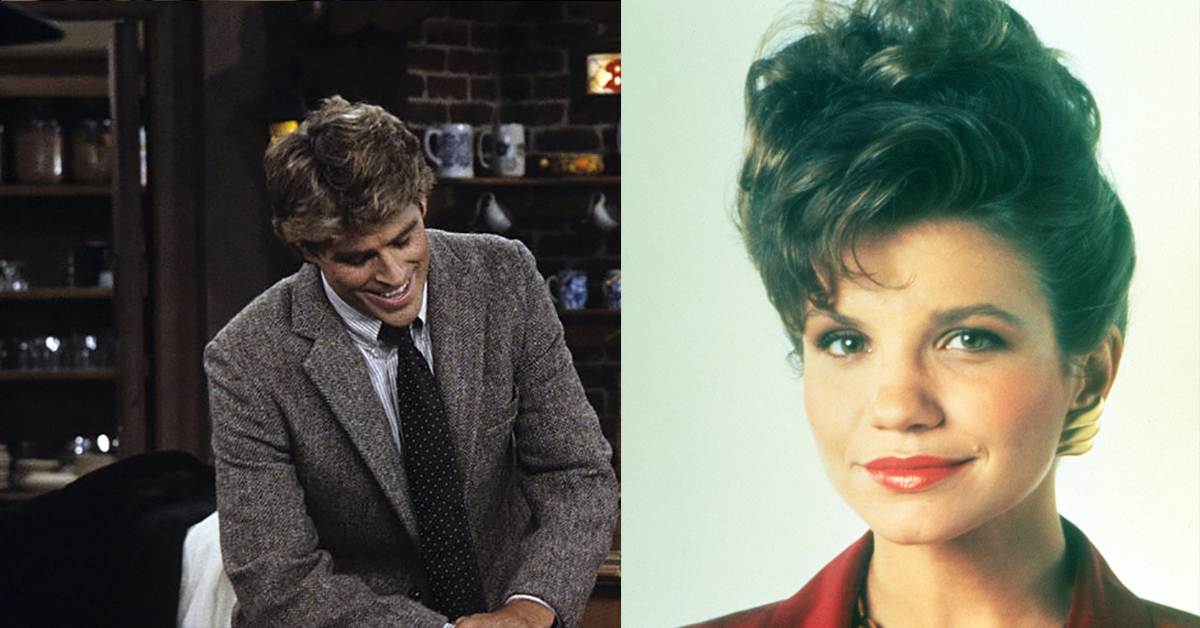 In 1958, a doo-wop group out of Pittsburgh called The Skyliners put out a chart-topping song called "Since I Don’t Have You."

You might remember the song pines, "I don't have happiness, and I guess I never will again," because the singer has lost his true love, he has nothing "since I don’t have you."

In the Nineties, hit artists like Don McLean, Ronnie Milsap and even rockers Guns N’ Roses covered it with great success.

But it was Happy Days that revived the song first in the Eighties.

On Happy Days, which faithfully looked to the Fifties for inspiration, it was fitting to feature an episode called "Since I Don’t Have You" that evoked themes of the hit song.

In the show’s 10th season, Roger Phillips plays the lovelorn role, struggling to keep it together as one of his former flames returns to town and starts messing with his heart again.

For actor Ted McGinley, who played Roger, true love didn’t come when he was all that young like it did for Roger. 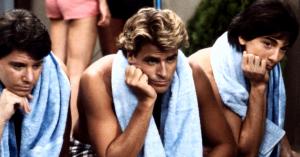 Ted McGinley expected to be fired from Happy Days immediately

He had just turned 30 when he took a role in a play at Burt Reynolds’ dinner theater in Jupiter, Florida, and unexpectedly, he locked eyes with the woman who would soon become his wife, Gigi Rice.

When Reynolds picked McGinley up from the airport, he warned Ted that his dinner theater was a place where tender hearts had a time of it.

"Strange things happen down here at this theater," Burt told Ted at the time, as McGinley recalled in an interview with The Palm Beach Post in 1991. "People fall in love, they get divorced, weird things."

"It’s almost as if he was fortunetelling," McGinley said.

The same year McGinley came to Burt’s theater, Reynolds had married Loni Anderson, so it makes sense Burt was feeling love in the air.

For McGinley, he instantly felt similarly stirred upon sight of Gigi Rice but it took two weeks before he mustered the courage to speak to Gigi after watching her week after week from afar as she performed an emotional scene on a bridge.

He didn’t need to worry about rejection, though.

Gigi told Gannett News Service in 1995 that when McGinley got to the theater, she felt the same instant spark. "He walked into the room, and I said, 'That’s the man I want to marry,'" Gigi swore.

Just as caught up in the romantic atmosphere, Gigi felt the same way Burt did about the dinner theater’s vibe, only she felt love was in the air in all of Jupiter.

"Jupiter is right on the ocean," Rice said. "It was the most romantic place in the world."

So when Ted walked up to Gigi, she was ready for romance, but that didn’t mean she knew what to say to her future husband.

She said she blanked and complimented McGinley’s tan, and that was all it took. Soon, they were talking about life and swiftly falling in love.

McGinley didn’t take Gigi out to a fancy restaurant when he scored his first date with her, though.

Instead, he kept it casual and took her to a shopping mall restaurant called Chuck & Harold’s.

There was nothing special about the typical chain restaurant menu, but after that night, Chuck & Harold’s became their special place.

"Now we consider it our favorite restaurant," McGinley said.

When the smitten couple finally decided to wed, it was three years later, and they couldn’t wait hardly a second longer to exchange vows.

So one day in summer 1991, they decided to skip the elaborate wedding planning and just get married at a church. Two days later, they were husband and wife.

At this point in his career, McGinley was finishing up his third Revenge of the Nerds movie and appearing in the cast of the hit show Married With Children.

Rice’s career was a little less stable, with Harry and the Hendersons cutting her episodes down in 1991, and the actor deciding to quit the show rather than accept the reduced episodes. A few years later, she bounced back, memorably joining the cast of The John Larroquette Show.

For McGinley and Rice, their careers never faltered for long, and neither, apparently, did their love waver after coming together at that strange dinner theater.

The key complaint at the core of the song "Since I Don’t Have You" is that the singer no longer has any love to share because the only person who cared for them has gone.

For McGinley and Rice, they never had to worry about that kind of loss after fatefully meeting, because they’re still happily married today.

When The Palm Beach Post reported their wedding announcement, they described Ted and Gigi’s union as "a marriage made in the heavens." 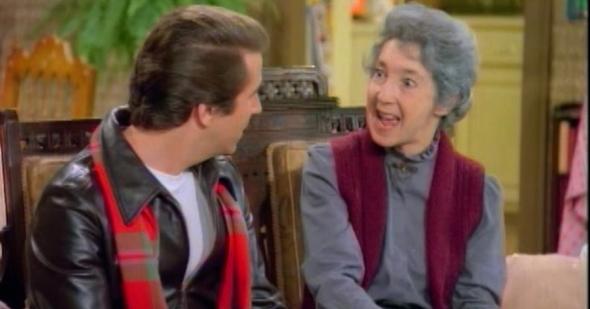 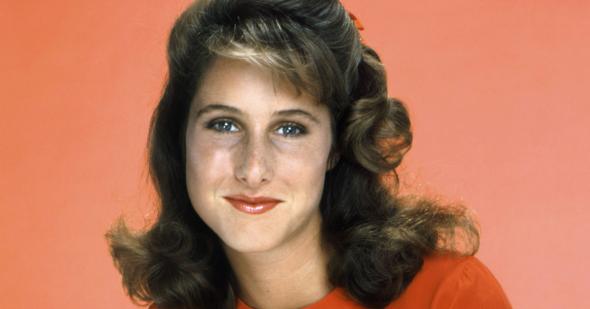 Did you know?
Cathy Silvers is so much like Jenny Piccalo that ''it’s frightening'' 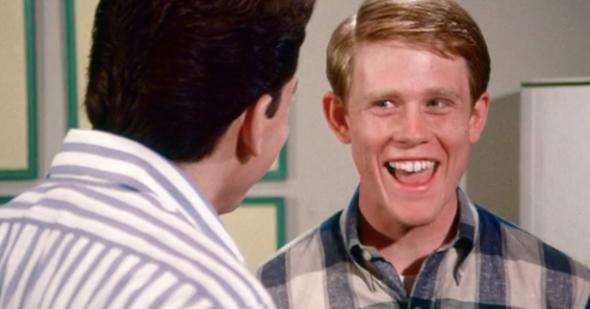 Ron Howard would want this young actor to play Richie Cunningham in a Happy Days reboot
Are you sure you want to delete this comment?
Close

bagandwallyfan52 9 months ago
Roger Phillips Ted McGinley
Having a regular girlfriend on
Happy Days would have been an excellant idea.
Like Reply Delete

bagandwallyfan52 9 months ago
I wish that the writers and
Producers of Happy Days has
Brought Back the Return of
Chuck Cunningham (Randolph
Roberts) as the assistant basketball coach under
Head basketball coach
Roger Phillips (Ted McGinley).
Bag Zombroski (Neil J. Schwartz)could have become a
Weatherman telling jokes on
A Milwaukee TV station while
He was giving me weather forecast just like Frank Deal
Told jokes while he was giving
The weather forecast on
Channel 8(WGHP) in High Point
North Carolina.

bagandwallyfan52 bagandwallyfan52 9 months ago
CAREY WILLIAMS the actress who played the girl
That MOOSE BARRY GREENBERG danced with
At Arnold's Drive In on the
HD episode Guess Who's Coming To Visit and
CAROL WILLIAMS (Marilee)
And Bruiser (Paul Linke)
Rebel (Reb Brown)
Ralph's girlfriend Kitty(Audrey Landers)
Jill Higgins (Charlene Tipton) Daphne(Hillary Horan) should have been
Regular characters on
Happy Days.
Richie had a cute girlfriend
Cindy Shellenberger Mary
Cross in one episode of Happy Days.
Like Reply Delete

bagandwallyfan52 bagandwallyfan52 9 months ago
Also if Bag Zombroski Neil J Schwartz
Had a a regular girlfriend
Like Wally Plumstead Skip Young had Ginger (Charlene
Salerno) on The Ascentures
Of Ozzie And Harriet.
In the Happy Days episode
Cruising Bag mentioned a
Phantom Girlfriend named
Mary Ann McCarthy.
No actress played Mary Ann McCarthy
Roger Phillips Ted McGinley
And Moose Barry Greenberg also should of
Had and Chuck Cunningham Randolph Roberts also should have
Had regular girlfriends .
Like Reply Delete

bagandwallyfan52 bagandwallyfan52 9 months ago
Bag Zombroski Neil J Schwartz might have been just as popular as Wally Plumstead Skip Young was
On The Adventures of Ozzie and Harriet because
Wally Plumstead had a funny girlfriend Ginger played by Charlene Salerno.
Ralph Malph (Donny Most)
And Bag Zombroski (Neil J.
Schwartz )were both great
Practical Jokers Characters on Happy Days
At least Eugene Belvin Denis Mandel and Melvin
Belvin also were interesting
Characters on Happy Days
Also Spike (Danny Butch)
Was just as great of a character on Happy Days
As Chachi Arcola Scott Baio
Was and Spike should have remained on Happy Days
Instead of 4 episodes of Happy Days only.
Like Reply Delete

Runeshaper 9 months ago
That's such a beautiful story (-:
Like (2) Reply Delete

UTZAAKE 9 months ago
"Jupiter is right on the ocean. It was the most romantic place in the world." Not during the months of February and March when both the Cardinals and Marlins hold spring training there.
Like (1) Reply Delete

JohnAustin779 9 months ago
Sweet story 💖. That's a wonderful way for Ted McGinley to meet his wife. I met my ex-fiancee in a similar way. When I met her up in Great Barrington back in the spring of '09, it felt like magic was in the air.

I had the greatest summer of my life that year and we wound up living together for 2 years. Every moment I had with her was just magical and special. But, unfortunately, life throws stuff in our path that we can't prepare for no matter how hard we try and all you can do is cherish what was 🖖.
Like (1) Reply Delete

MarkSpeck 9 months ago
I remember her from the Larroquette show and thinking how hot she was on that show. Around that time, I met a girl in a bar who looked somewhat like her. I was hung up on her for a time, despite everyone telling me that she was someone I shouldn't get involved with. She agreed to go on a date with me, and I made the huge mistake of buying two Tom Jones tickets...she stood me up! Fortunately, I got my Mom to go with me, so I got to see the concert.
Like (1) Reply Delete

Moverfan 9 months ago
Old Burt knew about the strange things, all right. He cheated on Loni for most/all of their marriage, then went on every TV show that would have him and blamed HER for it (his running around with some little bimbo waitress couldn't have had anything to do with it). Some twenty years later, he dumped the bimbo the same way he dumped his wife--he left the house for the day and shortly afterward, his lawyer showed up and told her to be packed and out by sundown.
Like Reply Delete

MrsPhilHarris Moverfan 9 months ago
I never knew that. 🤔 He always made out everything was Lon’s fault. Interesting.
Like Reply Delete

LoveMETV22 MrsPhilHarris 9 months ago
There are numerous stories on the Burt Reynolds, Loni Anderson relationship -meeting, marriage, and their long divorce. Different sides of their stories and lot's of speculation (both ways). Being in the public eye a lot of information gets published not always the positive.

MrsPhilHarris LoveMETV22 9 months ago
I did see a bizarre interview with him and I think he was high. He was wearing a purple suit. I believe it was velvet. He said Loni was a terrible mother and what not. He did later apologize.
Like Reply Delete

LoveMETV22 MrsPhilHarris 9 months ago
I read a few articles, they said different things. But the common thread in most were that they put aside a lot of their differences before Burt's passing. They were one couple that got a lot of media attention all along to say the least.
Like (1) Reply Delete

Andybandit 9 months ago
How cute for Ted to meet his wife that way.
Like (2) Reply Delete