Peter was playing in the water decades before Chandler.

Friends is a lie. We're not just talking about the unbelievability of those characters living in that massive Greenwich Village apartment. The opening credits pulled one over your eyes, too.

You know how it goes. The six pals frolic in and around a fountain. Chandler (Matthew Perry) spews water from his mouth next to a stone fish. Joey (Matt LeBlanc) floats on a raft with a frozen cocktail and sunglasses. Ross (David Schwimmer) tumbles backward into the pool.

All the while, the theme song, "I'll Be There for You," jangles in the background. "So no one told you life was gonna be this way…" CLAP CLAP CLAP CLAP. 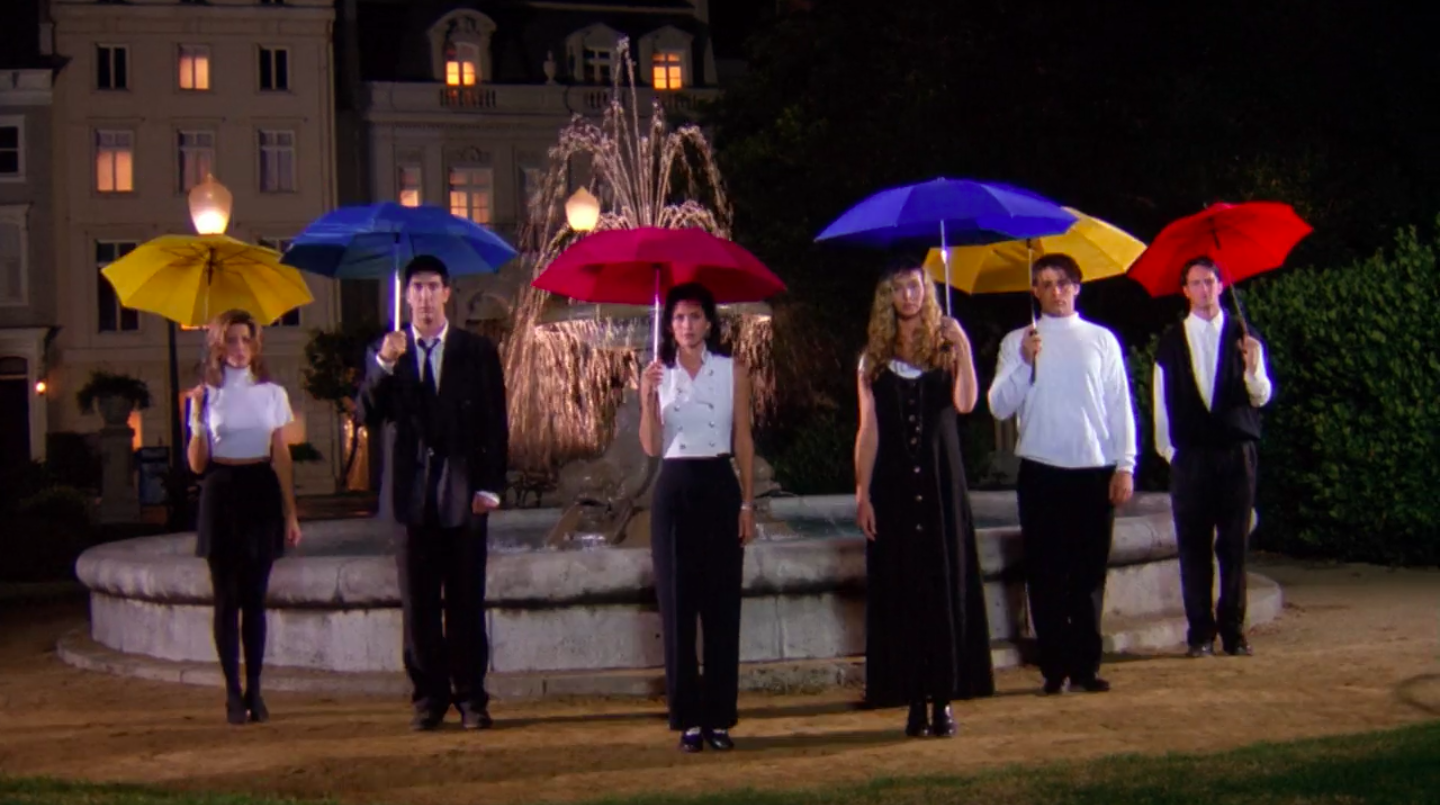 Come to think of it, the music sounds a good deal like the Monkees, no? But there is a much bigger and more concrete connection from Friends to that wild rock 'n' roll sitcom of the 1960s — the fountain turns up in many Monkees episodes.

Some tourists believe the fountain to be the Cherry Hill fountain in Central Park. Nope. That Friends fountain is not in New York City. It's not even in New York State. The fountain can be found in the middle of a green lawn on the Warner Bros. Ranch studio lot in Burbank, California. It's just down the street ("New York Street," coincidentally) from the Waltons house.

Loads of classic shows filmed on the Warner Bros. Ranch, including Father Knows Best, The Donna Reed Show, Dennis the Menace, Hazel, Bewitched, Gidget, I Dream of Jeannie, The Flying Nun and The Partridge Family. As you might have guessed by now, The Monkees also shot extensively on the lot.

Peter, Micky, Davy and Michael can be seen playing around the fountain like four, well, friends in many early episodes. You can spot that grassy lawn in the episodes "Your Friendly Neighborhood Kidnappers," "The Success Story," "The Chaperone," "Here Come The Monkees," "I've Got A Little Song Here," "One Man Shy," and "The Monkees Mind Their Manor." The fountain can be spotted — sometimes prominently, sometimes fleetingly — in most of those.

In particular, during the musical number "Gonna Buy Me A Dog" in "I've Got A Little Song Here," which you can watch in the video up top, the Monkees ride bikes around the Friends fountain. It's a nice aerial view. 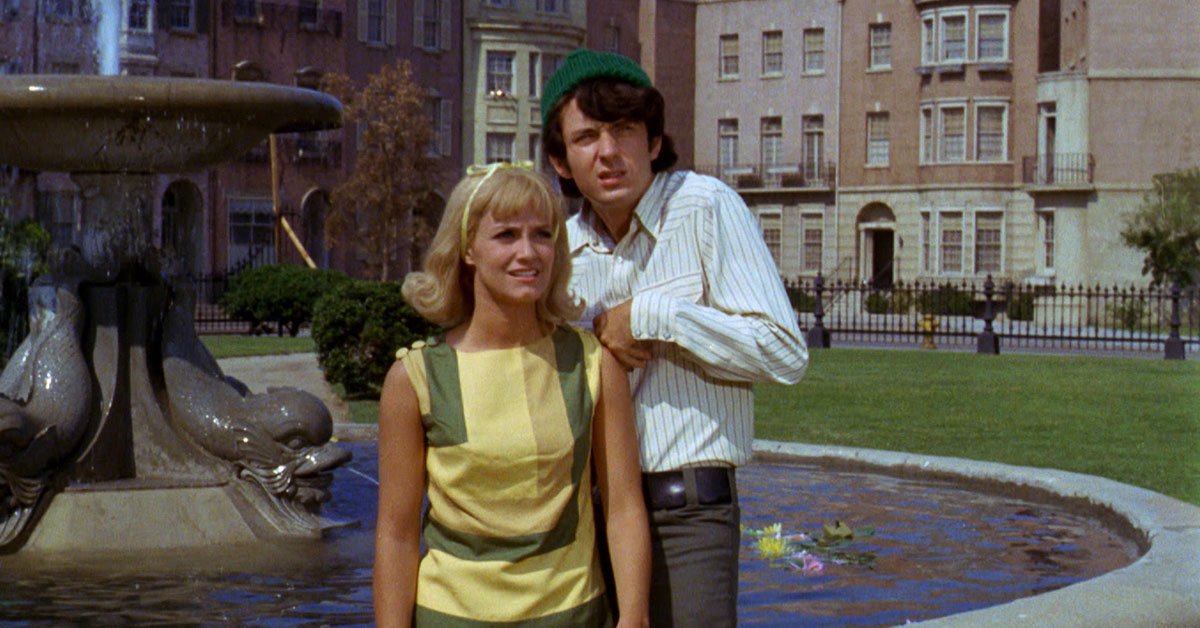 At the end of "The Chaperone," Peter dresses and hollers like Tarzan, swinging from a vine and splashing into the Friends fountain. He comes up soaking wet and spits water from his mouth, three decades before Chandler did it.

Here is Peter dancing in a ring near the fountain in another episode. 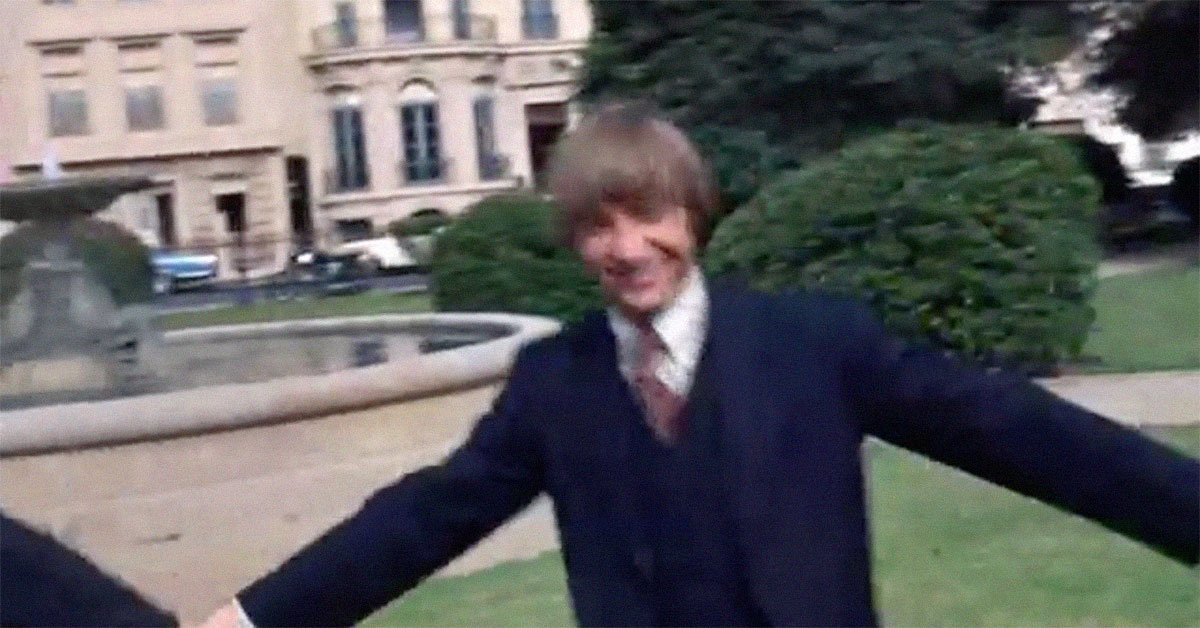 The history of the fountain makes it even more inappropriate for the opening of Friends. The water feature, lawn, and townhouses seen behind the fountain are modeled after Beacon Hill and Boston Common in Boston, Massachusetts. The fountain itself is modeled to look like Brewer Fountain in Boston Common, which featured Greek mythological figures instead of fish. But close enough.

Due to its prominent location on the Warner Bros. Ranch, the Friends fountain can also be found in loads of other films and shows, including the beloved Halloween movie Hocus Pocus.

But the Monkees were the first to truly use the fountain as their own personal water park. 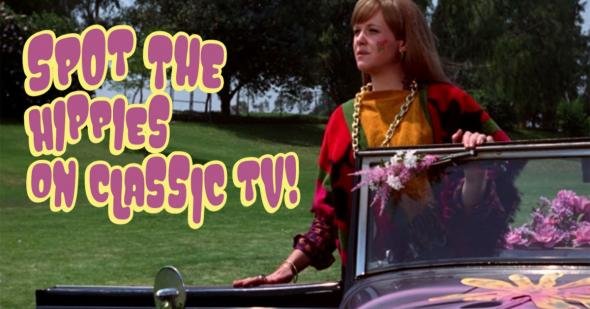 1960s
Don't be a square — match these hippies to the correct TV show
Are you sure you want to delete this comment?
Close

Duskblaze 15 months ago
They didn't all share the same apartment. They lived in an apartment complex. Ross actually lived across the street.
Like (1) Reply Delete 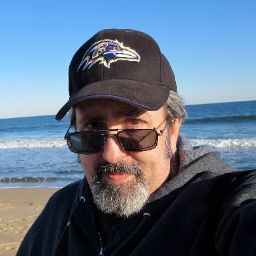 Gerald 15 months ago
The Monkees were not the first time the fountain was seen as the article title implies. It was on the Columbia Ranch since 1937. The most recent iteration of it with the fish as columns came in 1956. It was moved to the Warner main backlot in late 2019.
History here:
http://www.columbiaranch.net/Fountain.html
Like (3) Reply Delete

HerbF 15 months ago
The fountain was just moved from The old Columbia "Ranch" which in now the Warner Brothers Ranch to the backlot at Warner Brother's main studio lot - placed in the park square best known for it's appearances on "Gilmore Girls" and the 3rd season of "Mayberry, RFD" - this article confuses the two locations.
Like (3) Reply Delete

Wiseguy HerbF 15 months ago
Just as you confused it's with its.
Like Reply Delete

Or drag a file here to upload
Moody 15 months ago
Apparently the author of this story is not a fan of Friends. How is it a lie & why was it inappropriate to use the same fountain that other productions have used? Not exactly objective writing here.
Like (2) Reply Delete

Pacificsun Moody 15 months ago
They're using an expression (poetic license) to give the story a pop. We should kind of know by now that the best of the shows we love, are fictional (aka a lie). No harm was intended, and to feature a '90's show with a story among their "classic" TV lineup is actually quite flattering!!
Like Reply Delete
Moody Pacificsun 15 months ago
Sorry but I have to disagree. Using terms like "a lie", "inappropriate" & "unbelievable characters" is not poetic license in my opinion. It reads like a bias against a program they didn't like & not at all flattering. And for the record, I'm not a huge fan of one show or the other but I do expect more objective writing than this article has & not an opinion piece. It's surprising that MeTV allowed this to be posted.
Like Reply Delete

Duskblaze Moody 15 months ago
I was wondering the exact same thing. The author even acknowledges that other productions have used the fountain but singles out Friends as being unacceptable. It doesn't make sense.
Like (1) Reply Delete

Duskblaze Pacificsun 15 months ago
It's not flattering for anything to be called a lie. This piece is not complementary and shows a definitely bias against the show. This author clearly dislikes Friends and couldn't show the professionalism to keep it out of their writing.
Like (1) Reply Delete

Pacificsun Moody 15 months ago
I don't think MeTV is showing Friends on their network, are they??? Therefore they don't really have an obligation to be particularly loyal or supportive of it. Because they're not representing the "popularity" of the show among their lineup. I think every writer is entitled to their "opinion." Among the comments we do it here all the time. What's the difference. So I'll do it now. I thought Friends was annoying. Like Seinfeld was. But that doesn't mean there wasn't value in the shows. That's just how I felt about them. I'd rather have MeTV be honest actually. They have enough other little details that often get lost in the shuffle, easy enough. But I'm glad their giving us something to talk about! 😉
Like Reply Delete

Pacificsun Pacificsun 15 months ago
"their" should be "they're" (not looking for another grammar lesson).
Like Reply Delete

Wiseguy Moody 15 months ago
Obviously because Friends takes place in New York and the fountain is not located in New York. And as the article says, some people believe (perhaps rightly so) that the fountain is one in Central Park. Therefore it is a 'lie.'
Like (1) Reply Delete