Where To Watch Shop Store Contact
Home / Stories / This episode of Maverick reused sets (and a plot) from Casablanca
Did you know?

This episode of Maverick reused sets (and a plot) from Casablanca 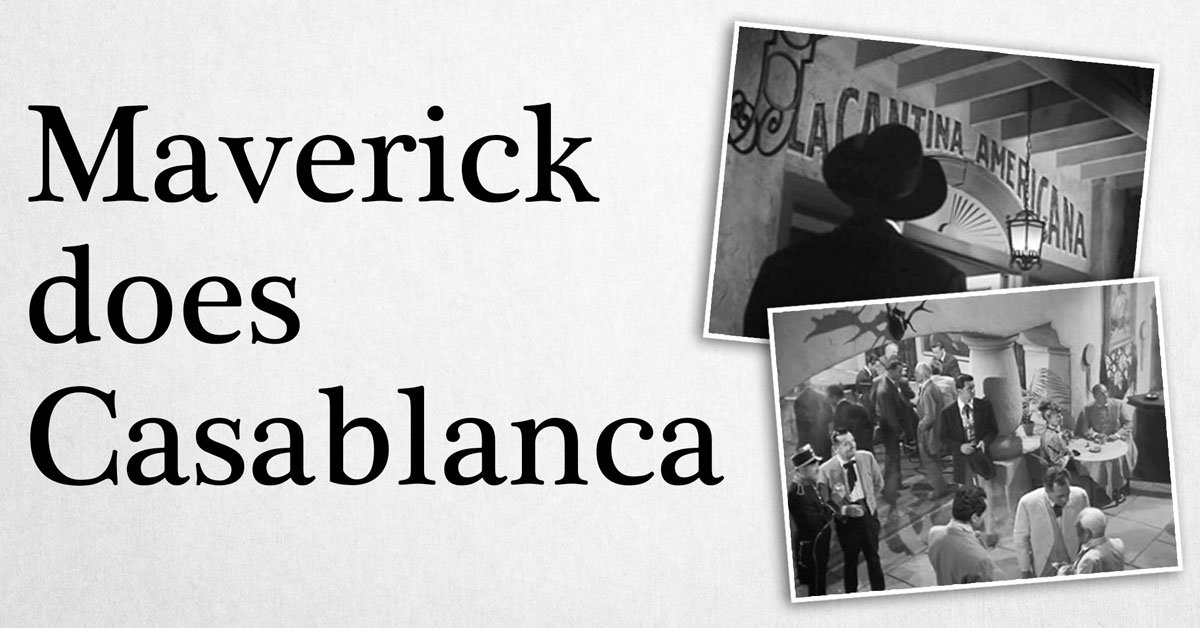 The second-season episode of Maverick "Escape to Tampico" follows Bret as he travels south of the border to bring back a man wanted for murder in New Orleans. What prompts this escapade? Money, of course. Specifically, money he desperately needs after an uncharacteristic losing streak at the poker table.

Gerald Mohr plays Steve Corbett, the man Bret is hoping to find. Corbett is an American expatriate living in Tampico, Mexico, who started a gambling establishment named La Cantina Americana. In years past, he was paid handsomely for services he provided to the Confederacy during the Civil War. He is wanted for murder in his home country, he never drinks with the patrons of his establishment and he likes a good white suit.

Notice any similarities to a certain American in the classic 1942 film Casablanca? Humphrey Bogart's character, Rick Blaine, owns Rick's Café Américain and fought in the Spanish Civil War (for the losing side). Rumors indicate he may have killed a man before arriving in Casablanca and he never shied away from an all-white tuxedo.

Gerald Mohr even looks like Humphrey Bogart! Not to mention the most concrete (no pun intended) connection of them all — parts of the Café Américain set were used to make La Cantina Americana for this episode of Maverick.

One clear difference between the two stories? Blaine decides to stay in Morocco while Corbett follows the woman he loves back to the States, willing to face his past.

Sometimes TV shows took stories or characters from other places in ways that felt like a cheap copy. Though, at a time when writers had to come up with roughly 30 episodes per season, it's hard to really blame them.

"Escape to Tampico" is different. It’s a clear homage to the original material with connections ranging from story arcs to the actual set. 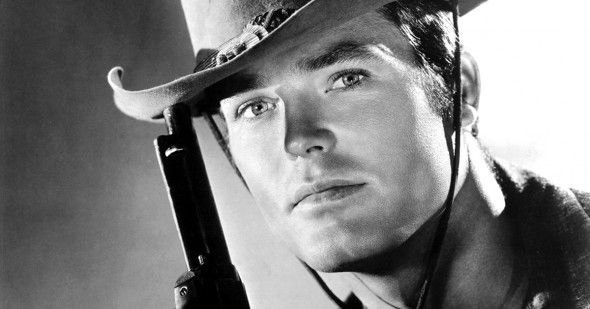 Did you know?Westerns1950s1960s
Maverick replaced James Garner with a lookalike and hoped viewers didn't notice
Are you sure you want to delete this comment?
Close

MikefromJersey 22 months ago
In today's newspaper TV column by Rich Heldenfels, he talks about this episode in response to my query.
I pointed out that El Cheapo Warner Brothers used a reaction shot of German officers in full uniform at a table in "Casablanca" for this Maverick episode!
Talk about contempt for the audience. Also in a New Orleans Madi-Gras episode, they used footage from a 1940's Madi-Gras, you can see cars, wrist watches on the men, etc.

FrankCollins 22 months ago
I have seen Casablanca many, many times. I have seen Escape to Tampico many times. I never thought there was ANY similarity between the two, and after reading your article, I still don't. Perhaps the most ridiculous statement in your article is that Mohr looks like Bogart. I like both actors, but there is no similarity, either physically or in acting style.
Like Reply Delete

MaryMitch 22 months ago
If you tour the Warner Bros studio (I recommend it!) you can see Sam's piano from "Casablanca"
Like Reply Delete

HerbF 22 months ago
Gerald Mohr was also the first actor to play DOC HOLIDAY on Warner Brothers western series - he did two episodes of MAVERICK as the character (He had actually also appeared as a different character between the two appearances! He did a total of 7 episodes of the series.)

Adam West then played the part in an episodes of LAWMAN, COLT. 45 and SUGARFOOT (At this point Warners was trying to convince ABC to pick up a DOC HOLIDAY series and these were "backdoor pilots" but ABC passed.)

The last actor to play Doc Holiday at Warner Brothers was Peter Breck, who had just finished his 2-season run of "Black Saddle". He played Doc in one of the final Season 4 episodes,and 5 of the 13 season 5 episodes of MAVERICK - with no mention of the earlier appearances by Mohr as Holiday! He also played the character differently than Mohr or West.

Ironically, Mohr also played Doc Holliday on an episode of the half-hour western "Tombstone Territory" (one of the more successful TV westerns of the time - 3 seasons) that aired 17 days after he made his second appearance as Doc Holiday on MAVERICK!

HerbF 22 months ago
Gerald Mohr also holds the distinction of being the first voice actor to play both a Marvel Comics and DC Comics character! He played Mr.Frantastic, Reed Richards in Hanna-Barbara's THE FANTASTIC FOUR in 1967 and was the voice of Green Lantern in Filmation's DC Super-Hero Segments (3 Solo, 3 Justice League) on AQUAMAN also in 1967.
Like Reply Delete

MrsPhilHarris 22 months ago
He played Philip Marlowe on radio. Had a great voice and spoke a number of languages. Was on Perry Mason 3 or 4 times.
Like (2) Reply Delete

texasluva MrsPhilHarris 22 months ago
In 1949, "Radio and Television Life" magazine named Mohr as the Best Male Actor on Radio. He started in the 1930's. Worked on radio more then 500 times while hitting the screen in movies and later TV shows.
Like (1) Reply Delete

Mike 22 months ago
Warner Brothers did this all the time.
And not just with TV shows.
Any feature film that WB made throughout its history was ripe for reuse on their many TV shows in the '50s and '60s (For a while there, WB had at least one third of ABC's prime time schedule).
MeTV ought to bring back as many of WBTV's shows as possible - and in Prime Time.
All Hail W. Hermanos!
Like Reply Delete

HerbF Mike 22 months ago
W. Hermanos which is "warner Brothers" in Spanish was first used during a writers strike to hid the fact scripts were being reused between the WB shows. They never said who "ghost edited" to scripts to fit the format of the show that was the remake. However, there's a story that supposedly a HAWAIIAN EYE episode was a word-for-word-shot-for-shot remake of a MAVERICK episode with Conrad and Isley standing in for Gardner and Kelly!
Like Reply Delete

texasluva 22 months ago
Gerald Mohr. You never think about him until you see a pic and all kinds of things come to mind. He was big in radio and television. With 156 actor credits alone he played in most everything from good to bad and in between. Huge in "B" film Noir and others with some of the greatest stars ever. Gilda, The Angry Red Planet, Sniper and The Lone Wolf In Mexico are some of his better works. Also hit most of the more famous TV Shows. Ranging from TV westerns like Maverick (1957), Bronco (1958), Cheyenne (1955) and Bonanza (1959) to action/courtroom series such as 77 Sunset Strip (1958), Hawaiian Eye (1959) and Perry Mason (1957), among many others. Also heard he was quite a piano player. So Play It Again Gerald.....
Like (1) Reply Delete

daDoctah texasluva 22 months ago
He was also in the episode of "Lost in Space" that aired in the series timeslot, a repeat from season two that aired after the end of season three.
Like Reply Delete

texasluva daDoctah 22 months ago
His last Hurrah was in The Big Valley (1969). Though he passed on in Nov 1968. I was just talking about this other day about famous actors dying before their film is even released. James Dean, Carrie Fisher among others. In TV shows they do a bunch to there is anywhere from 2-6 months backlog before being shown.
Like Reply Delete

HerbF daDoctah 22 months ago
"Visit to Hades" was the only LOST IN SPACE episode to air 3 times on CBS, and was the last LOST IN SPACE to air on CBS. Why that particular episode was chosen out of the 30 color second season episodes is unknown.
Like Reply Delete