Jun 9, 2020, 2:06PM By MeTV Staff
On Now
Hoagy Carmichael sings the Yabba Dabba Doo Song on The Flintstones
Up Next:
Share

Some of the best episodes of The Flintstones revolve around Fred's hairbrained, get-rich-quick schemes. One great example of this is the first episode of season two, "The Hit Song Writers."

It originally aired in September 1961 and, as the title suggests, tells the story of Fred and Barney trying to write a tune that will make them rich. While not the most original plot (a Honeymooners sketch has virtually the same premise) it features Hoagy Carmichael performing "Yabba Dabba Dabba Dabba Doo" and many other great moments.

Here are five interesting facts about this classic episode.

1. This was the first time a celebrity guest star voiced themselves on the show. 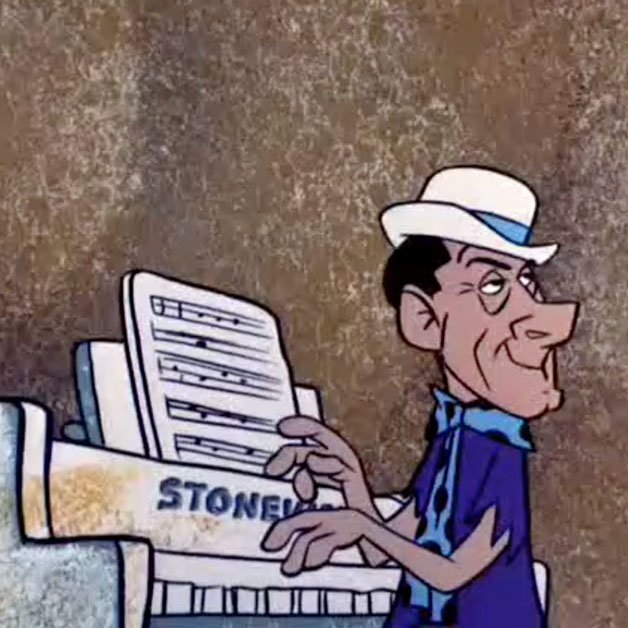 In the episode, Fred decides to take Barney's poems and pay someone to put them to music. He assumes it'll be a hit and they’ll be rich in no time! At Rockwell Music Publishers they run into someone else they think is just another wannabe but is really Hoagy Carmichael, renowned musician and songwriter behind "Georgia on My Mind" and "Stardust." Carmichael was the first celebrity to voice themselves on The Flintstones. Interestingly, he goes by his real name, instead of a Stone Age pun like "Ann-Margrock."

2. A Lawrence Welk lookalike also appears in the episode. 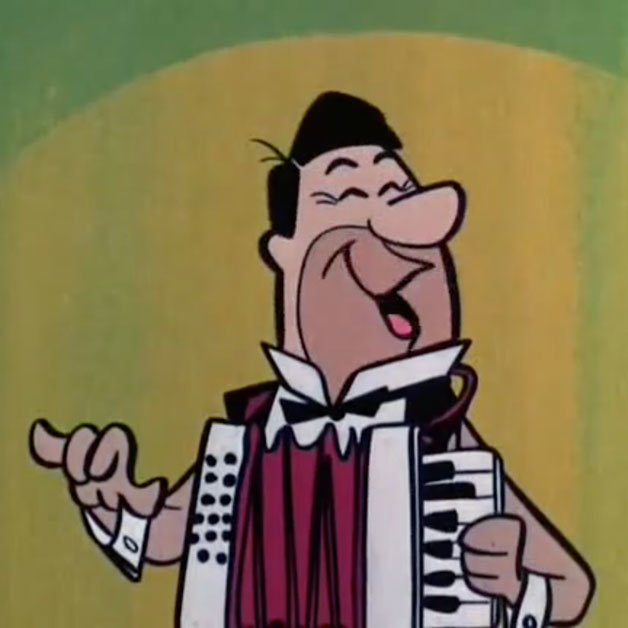 At the end of the episode, Hoagy Carmichael performs "Yabba Dabba Dabba Dabba Doo" using lyrics Barney wrote about Fred. Before he takes the stage, Carmichael is introduced by a man with an accordion who likes to use "wunnerful, wunnerful" to describe everything. Fans of Lawrence Welk will immediately recognize this loving spoof of the famous bandleader and television personality. Though the voice is just an impression by voice actor Daws Butler, it's spot-on. The parody is complete with a woolly mammoth blowing bubbles for the "champagne music" host.

3. This is one of only five episodes where Mel Blanc doesn't voice Barney. 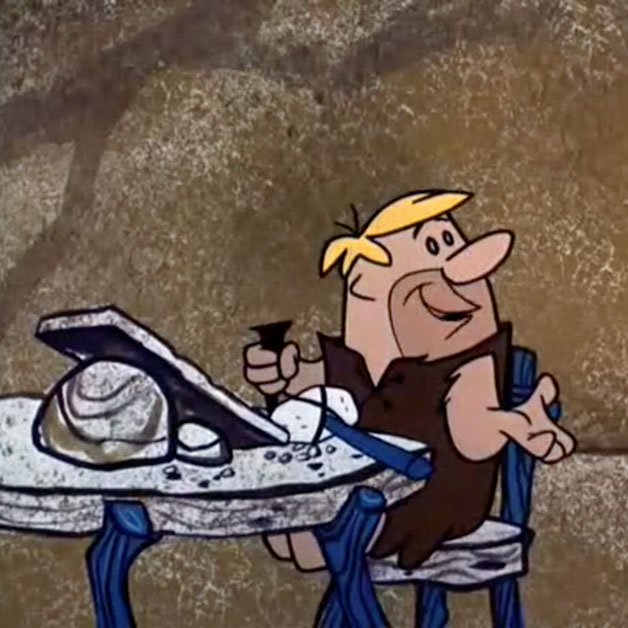 Lawrence Welk wasn't the only impression Daws Butler did in this episode. He also stepped in to voice Barney Rubble because the usual actor, Mel Blanc, got into a near-fatal car accident. Blanc would have been out for many more episodes if it wasn’t for the fact that he decided to record lines while bedridden in a full-body cast! If you listen closely, you can hear a difference between Barney's voice in the early episodes of season two and the rest of the series. 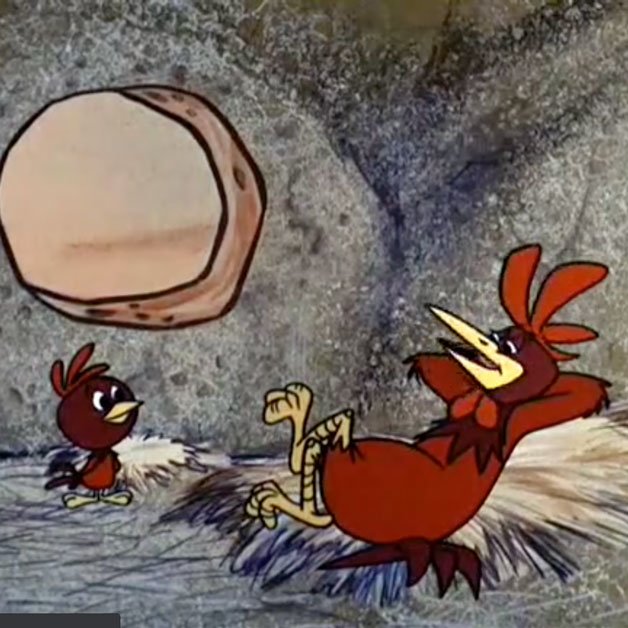 About halfway through this episode, there is an unprompted cutaway to two roosters, a father and son, in some sort of cave-dwelling. The scene involves the baby rooster finally getting the chance to say "cock-a-doodle-doo" and serves as a transitionary scene as Bedrock goes from night to morning. Both roosters are voice by, you guessed it, Daws Butler. It is a rare appearance of animals on The Flintstones that don’t serve some kind of mechanical purpose – made even more rare by the fact that the roosters look normal and don’t appear to be dinosaurs or any other Stone Age animal. 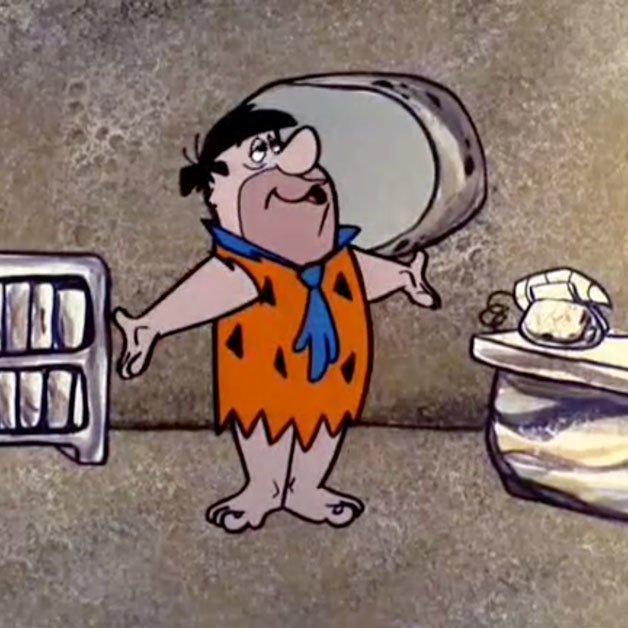 William Hanna, co-creator of The Flintstones with producing partner Joseph Barbera, loved a hilarious musical moment from "The Hit Song Writers." In the scene, Fred enlists Hoagy Carmichael, without realizing who it is, to accompany him on the piano. Fred even tells Hoagy, "Playing this will be your first big break." Fred then goes into a hokey rendition of Carmichael's own "Stardust" complete with silly lyrics. According to the liner notes of the 1994 album The Flintstones: Modern Stone Age Melodies, this was William Hanna's favorite musical moment on the show.

kimmer 3 months ago
Flintstones is and always will be my favorite cartoon series....!!!!

beaver 3 months ago
Although happy days is a good show, please leave the Flintstones on for an hour and move happy days to 7:00.
Like (3) Reply Delete

frankingz beaver 1 month ago
I agree!!!! Thank
Like Reply Delete

beaver 3 months ago
I own every episode of the Flintstones on DVD. It's my favorite show of all time. My ring tone is the theme song. The shows are my escape from reality. Thanks MeTV for airing them!
Like (2) Reply Delete

frankingz beaver 1 month ago
Me too!!!
Like Reply Delete

His name in that episode was his real name

dmagoon 3 months ago
I thought he was called "Stoney Carmichael".
Like Reply Delete

mveahead31 3 months ago
Just wished they hadn't cut 30 minutes of The Flinstones to be replaced with Happy Days. I could watch the whole gang (The Flinstones) all day!
Like (3) Reply Delete

dmagoon mveahead31 3 months ago
Is MeTV hinting on "The Pebbles and Bamm-Bamm Show" coming?
Like (2) Reply Delete

stephaniestavropoulos 3 months ago
Not only do the roosters look normal, they talk normally as well. They don't speak English. Like the trash compactor, record player, can opener, etc do. Come to think of it: maybe the animals speaking English in Bedrock is the norm Although Dino barks. and Hoppy honks, {or whatever that sound his called that she/he makes.} I guess it's only those animals that are appliances, etc. that speak English.
Like (1) Reply Delete

MrsPhilHarris 3 months ago
Love The Flintstones.
Like (1) Reply Delete