On occasion, whether it was their fault or not, Wally and Beaver had to answer to the law! 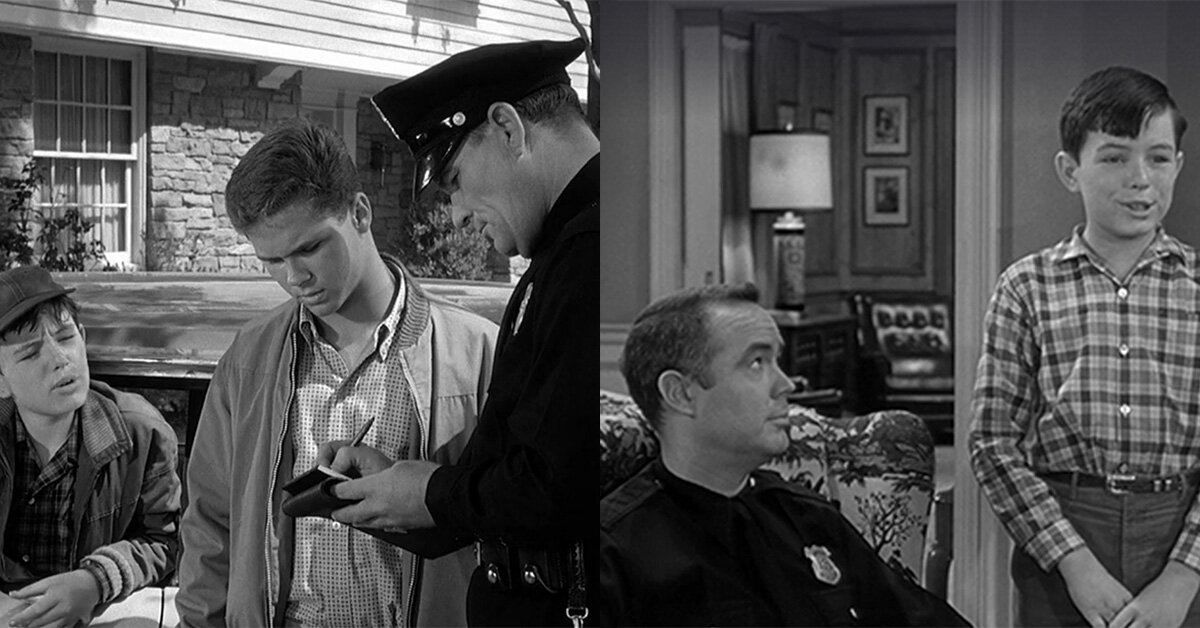 Sometimes things can get out of hand in Mayfield, the home of Wally, Beaver, the typical group of friends and all their antics!

Oftentimes a scold from Ward can quell the situation, other times a more direct approach either puts an end to something or makes the truth come out. In these cases, that direct approach is the law!

Here are six times Wally and Beaver had a run-in with the law, whether it was their fault or not! 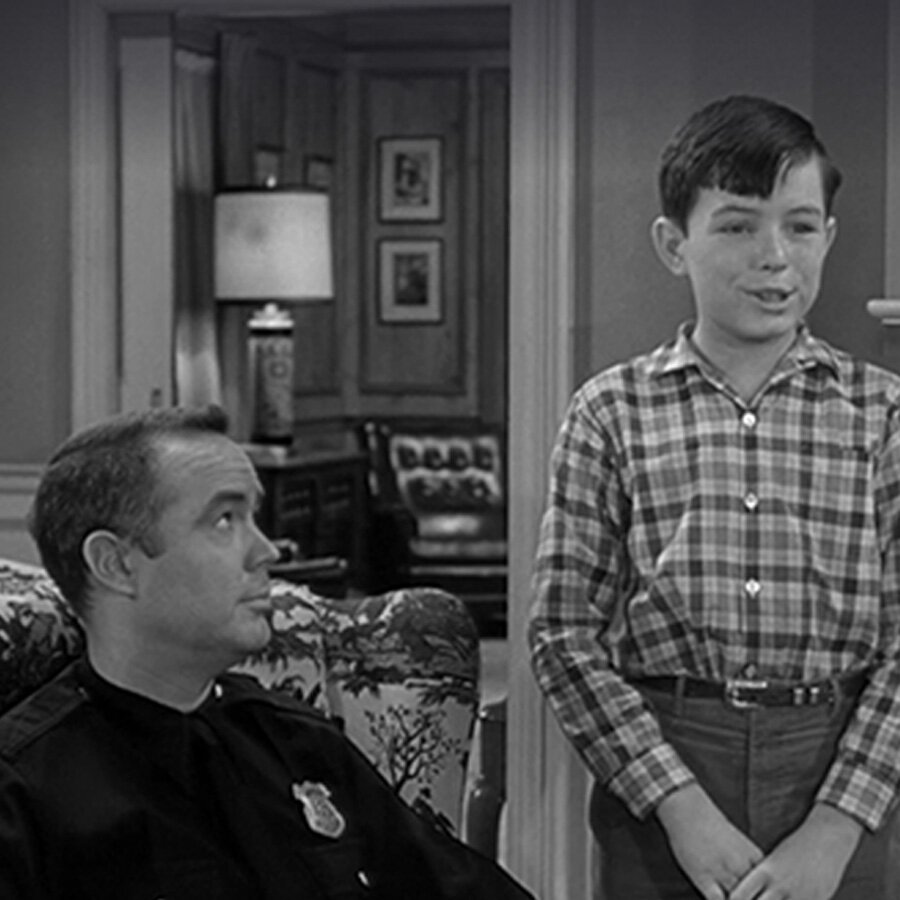 The Beaver and his friends, Gilbert and Richard, can't come up with anything to do, so Richard pitches an idea. He suggests the trio head down to the abandoned McMahan house to "mess around." Credit goes to Beaver for declining the offer, on account that Ward said he didn't want him hanging around the empty house. When Richard gets busted for breaking a window, he tells the officer his name is Theodore Cleaver. This makes for an awkward encounter later that night at the Cleaver household, both for the officer and the Cleavers! 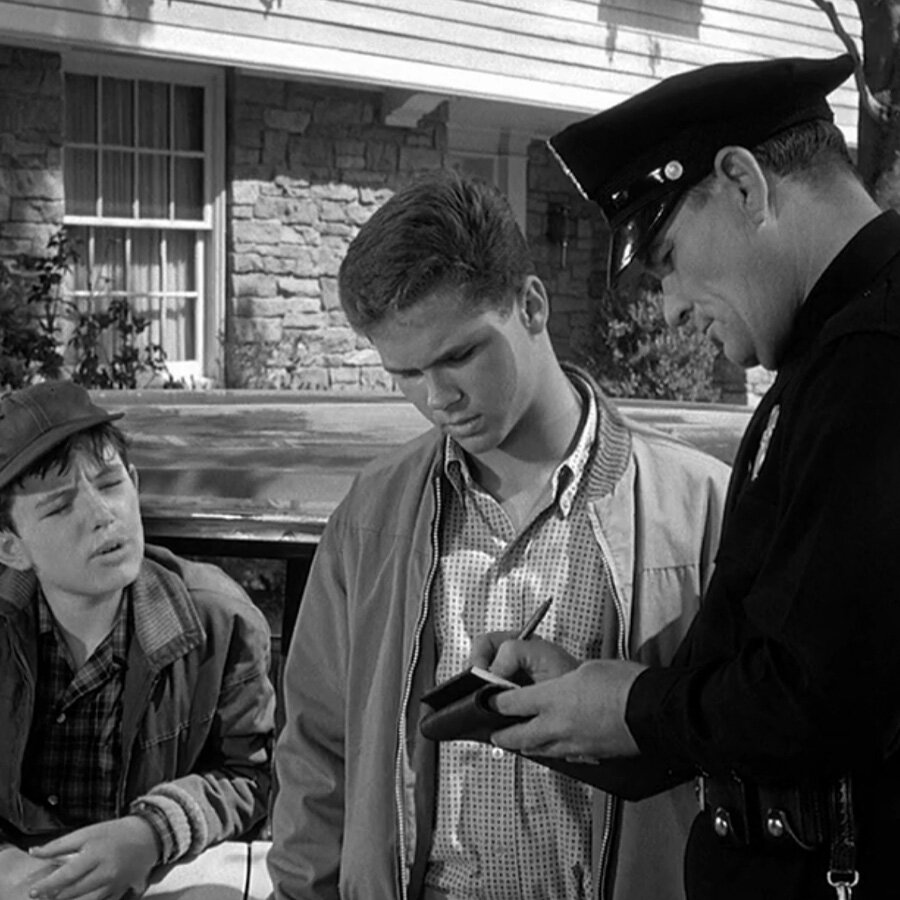 The Beav alone was at fault for this encounter with the law, but Wally gets the brunt of it! When he and Gilbert are discussing what they're going to do with the car when they're older, Beaver suggests he and his buddy sit in the Cleaver car and pretend to be "old people" who are taking their kids for a ride. When the car rolls into the street causing a traffic jam, Gilbert bails and leaves Beaver to get out of the situation by himself. Wally seems to save the day when he walks by, grabs the spare key and moves the car. That's when an officer approaches, asking Wally for a driver's license! Without one to give, he's summoned to traffic court with a ticket! 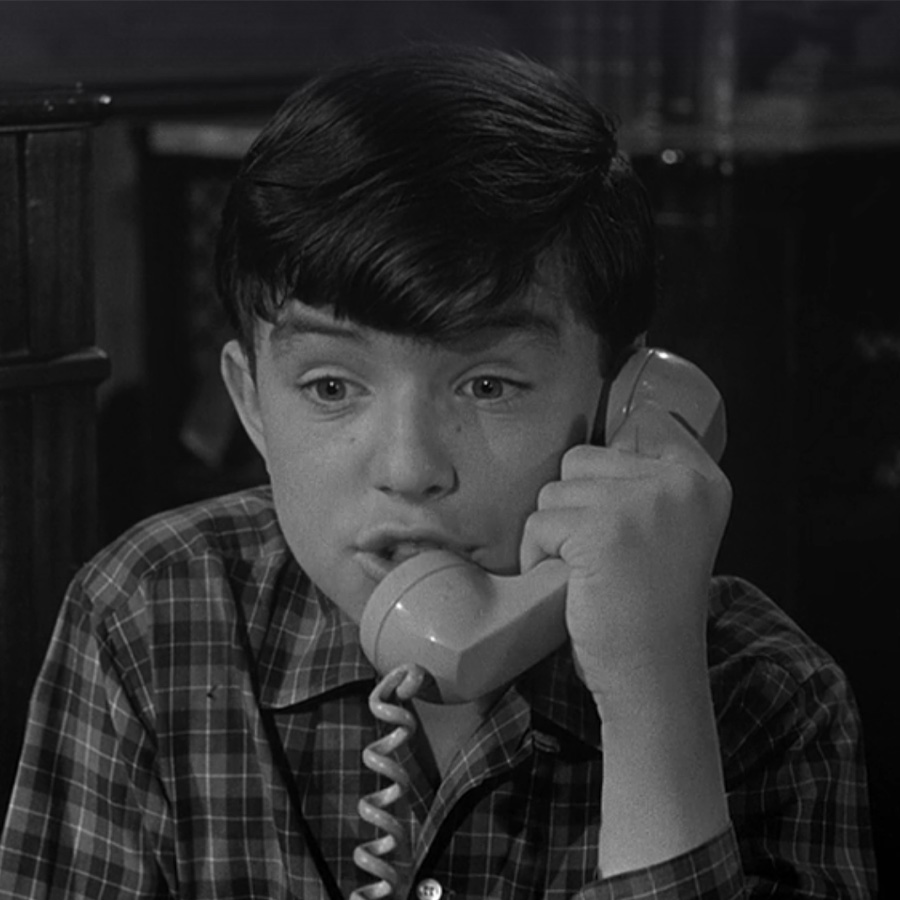 When Ward and June go out for the night, Beaver and Gilbert decide to watch a spooky show on TV. Continually saying neither of them is scared after watching, their attitude changes when a car pulls up to the house. What Beaver and Gilbert don't know is Lumpy is in the car to pick up Wally for a mascarade party. Wally isn't home yet, so Lumpy throws on a mask to scare him when he gets home, not knowing Beaver and Gilbert are calling the cops! "Hello police station? Well you see, there's a suspicious looking car out in front of our house with two men in it! Me? Uh, Mr. Cleaver!" Beaver's "father" voice was convincing enough as the police showed up and hauled Lumpy away! 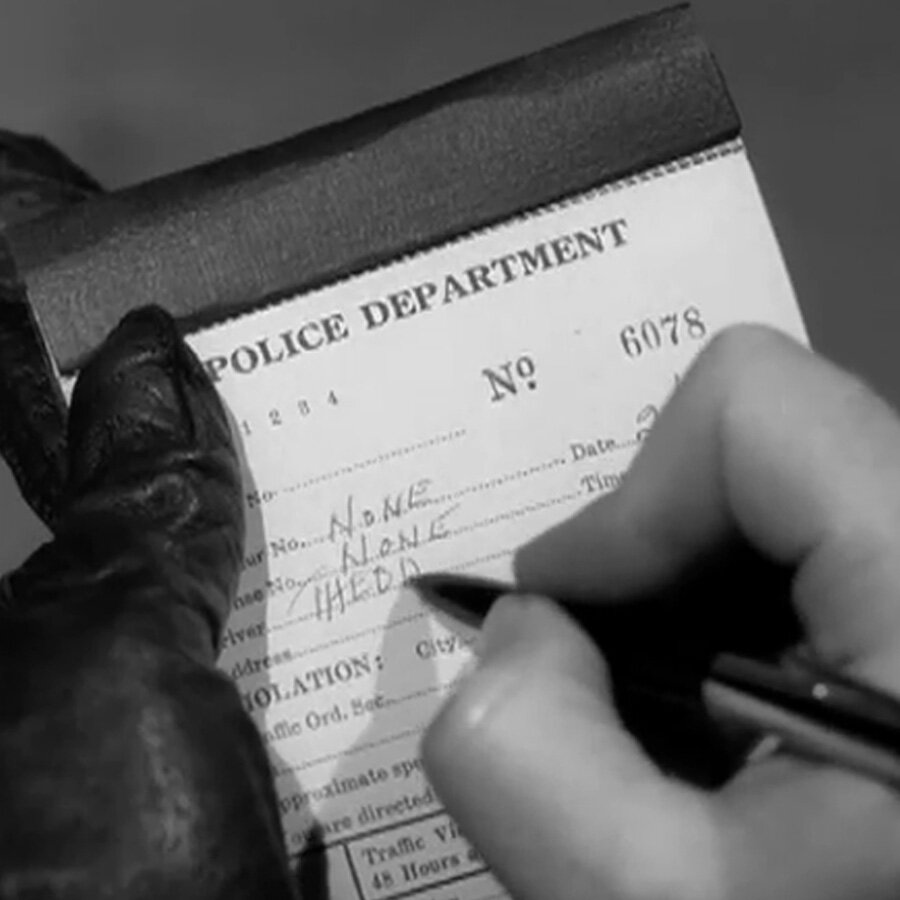 If you don't want a ticket, don't speed. If you don't want a ticket, don't drive without a license. It's a lesson Beaver had to learn the hard way! After being told not to take out the home-built race car with a lawnmower engine without Ward present, Beaver cracks under the peer pressure from his buddy Larry. Just a quick spin around the block turns into the kids being pulled over and ticketed yet again! 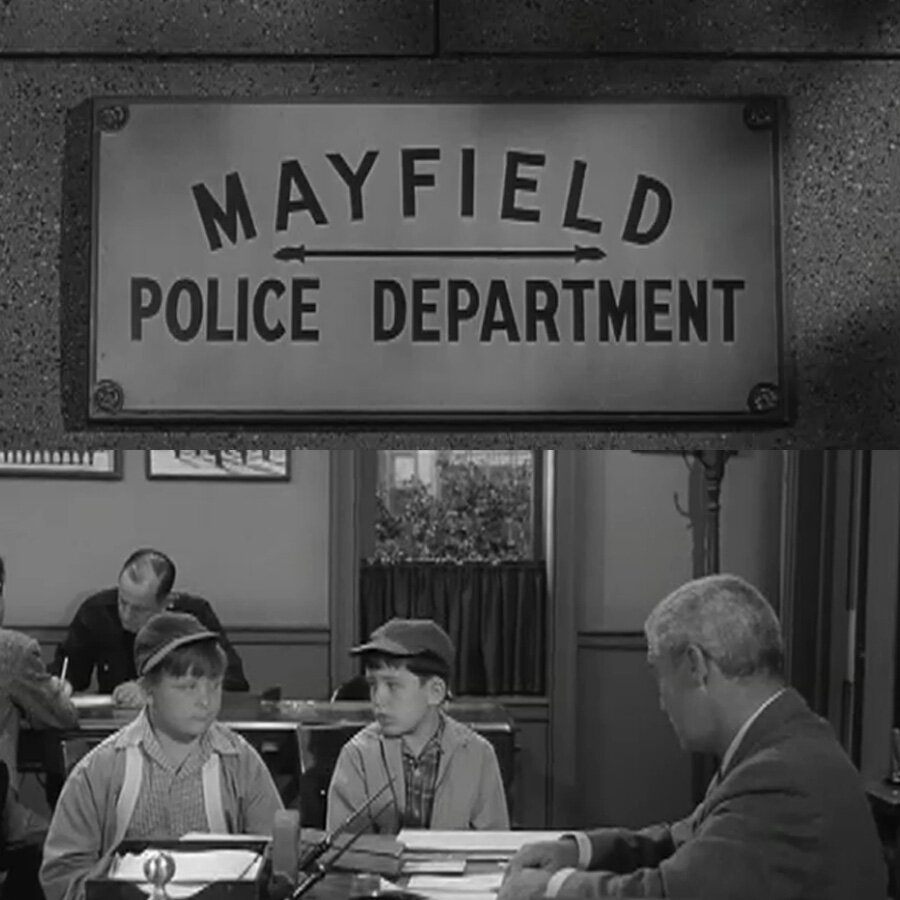 It's Beaver and Larry again having trouble with the police, but this time it isn't totally their fault! When the boys are tricked by a couple of older fellas to use a stolen rowboat, it's them who get caught by the police! Back at the station, the boys tell the truth about how they ended up in the boat and that Beaver's parents aren't answering on account they're at Wally's football game. They get nervous, as the officer at the station doesn't seem to buy their story! 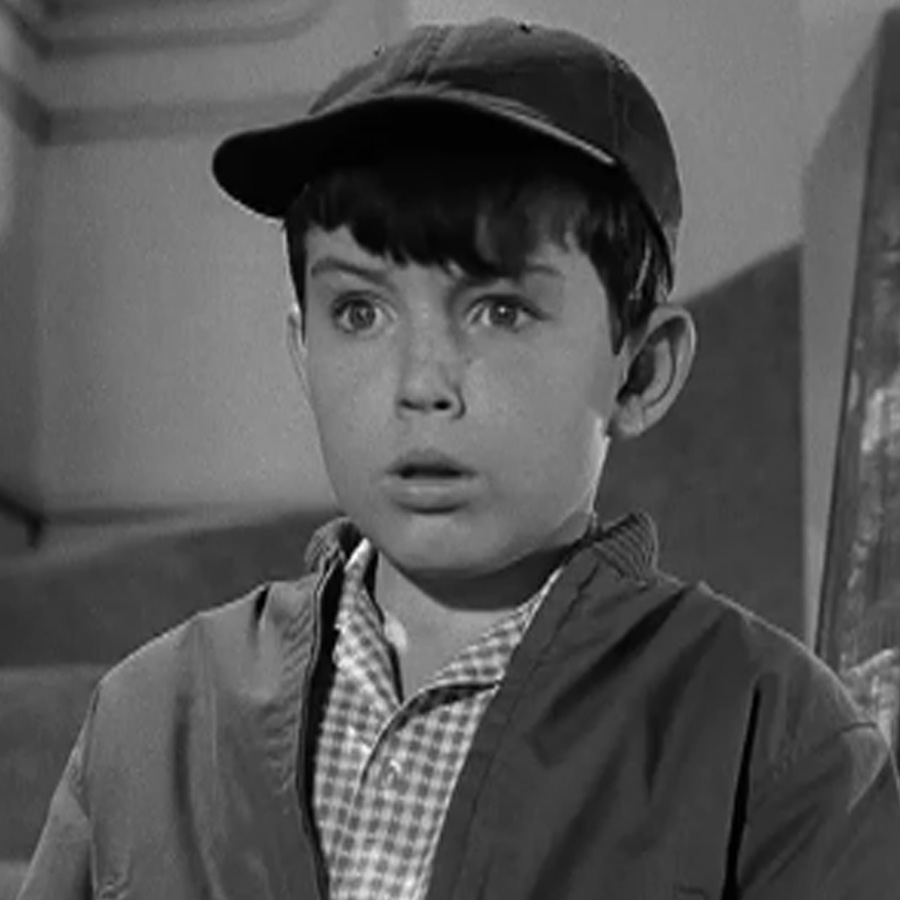 It wouldn't be a Leave It to Beaver story without Eddie Haskell causing trouble. The theme of this list has been the police, and Eddie tricks Beaver so bad, he thinks the "library police" are coming after him! Losing a library book signed out under Ward's card, the Beaver is worried some sort of officer will come and arrest him due to unpaid fees! 15 days have gone by since he lost the book, amounting to an entire dollar in fees! Eddie tells Beaver he better find the book soon or "they'll send a guy around. A library cop in a uniform and you know what he's going to do if you don't have that book? Throw you right in jail!" The face of the Beaver says it all.

SEE MORE: How well do you know these job situations on Leave It to Beaver? 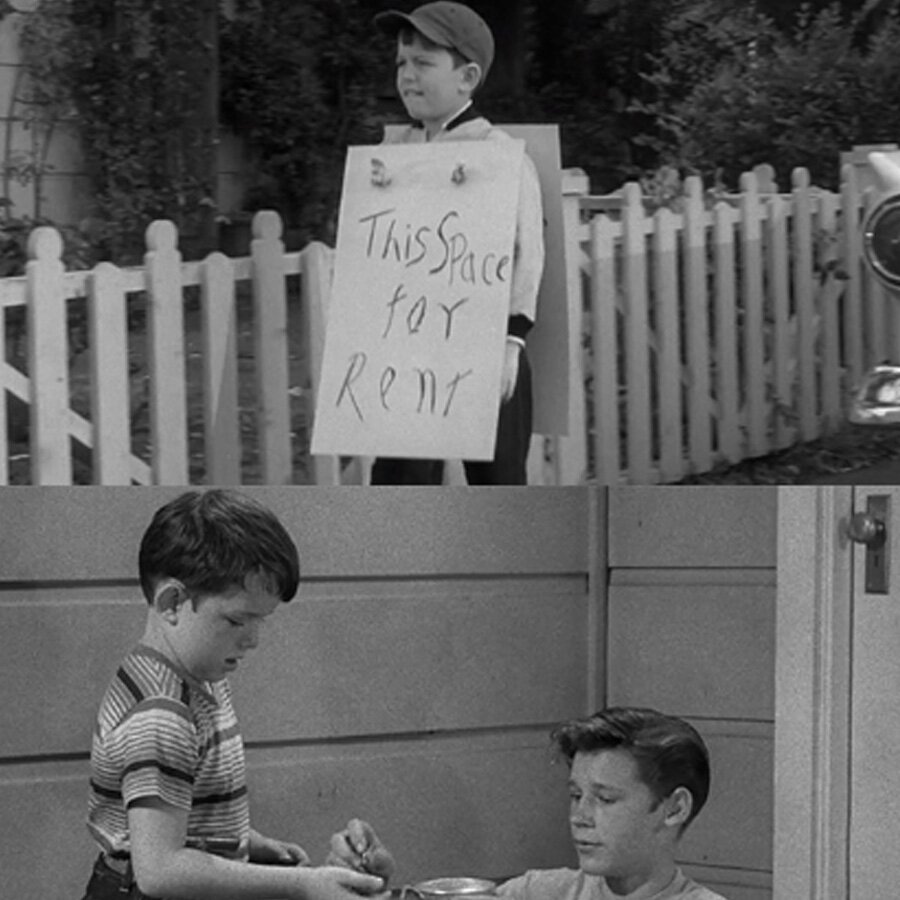 From yard work to entrepreneurship, Wally and the Beaver didn’t shy away from working for their pennies. 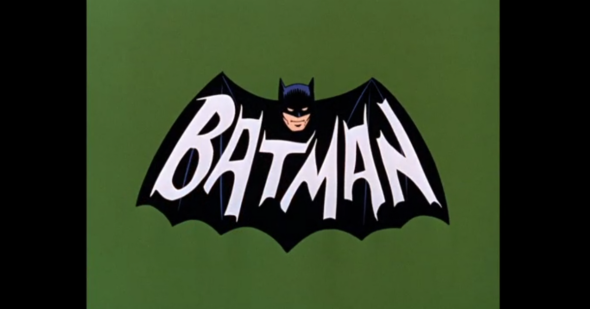 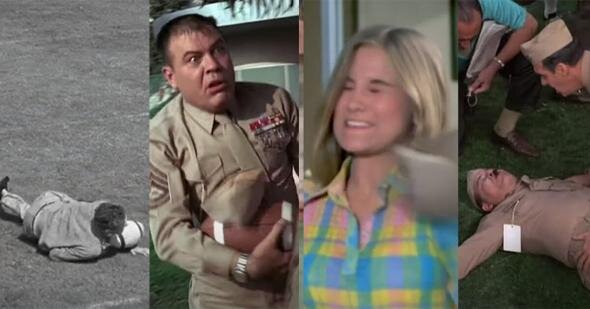 SportsLeave It to BeaverThe Brady BunchThe Flintstones
Six things to keep in mind when it comes to football, courtesy of classic TV 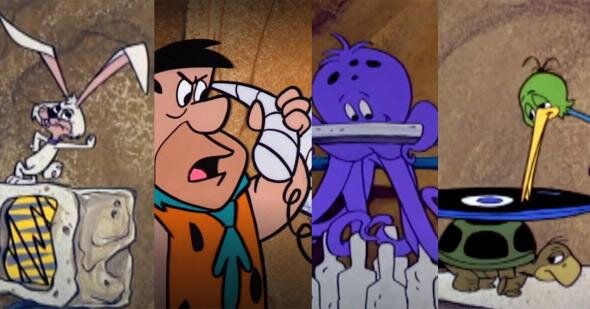 The FlintstonesTechnology
8 creative ways The Flintstones brought technology to Bedrock
Are you sure you want to delete this comment?
Close

RedSamRackham 7 days ago
* Bravo Beaver! Mistaken Identity was the 1 time Beaver didn't let Gilbert or any of his other pals talk him into doing something goofy.
Like Reply Delete

GOOSEYGOOSE9 8 days ago
Episodes With Lumpy Were The Best.Better Than Larry.And Eddie Haskell.
Like Reply Delete

Logreen 10 days ago
What great show! Such nostalgia now!
Like (1) Reply Delete

MrsPhilHarris 11 days ago
The episodes with Larry were the best.
Like (1) Reply Delete

Andybandit 11 days ago
Wow, I never knew Wally and the Beaver got in trouble with the law so many time.
Like Reply Delete

McGillahooala Andybandit 11 days ago
Yeah. Who knew they were such juvenile delinquents. Lot more going on with those fellows than just grabbing some cookies and a hunk a milk.
Like (1) Reply Delete

cperrynaples McGillahooala 10 days ago
But wouldn't you think that Eddie Haskell would be the worst? After all, he did steal all that ice cream with an unknowing Wally...LOL!
Like Reply Delete

RedSamRackham cperrynaples 7 days ago
* Yet when Eddie "stole" the ice cream he was just innocently buttering up the boss (foreman).
Like Reply Delete

cperrynaples RedSamRackham 7 days ago
Well there is a difference between lying to June Cleaver and lying to your boss! After all, Wally's mom can't fire Eddie...LOL!
Like Reply Delete

Pacificsun 11 days ago
One of my favorite episodes was #3, which gets overlooked even though it plays into the hands of Beaver's insecurity in such an obvious way. He and Gilbert getting caught regarding the rowboat was good too, because it was a realistic story within the LITB universe. But I'm not sure after all the scoldings Beaver got from his father, from smoking the stupid pipe, to leaving his toys in the driveway - that he would be fooling around behind the steering wheel of a car. Much less allowing it to roll down the driveway. What kid doesn't know to break something. But the nicest thing about these particular episodes was in depicting the Police, as they should be remembered by children, and then growing into adults. We had one assigned to our school as a crossing guard. And he and the kids all got to know each other by name, including our parents. We never forgot him, and was the kind of person we really could take a problem to.
Like Reply Delete

Pacificsun Runeshaper 11 days ago
Do you think the Producers (Connolly and Mosher) had that many troubles in their own lives as well 😎!
Like Reply Delete

MrsPhilHarris Pacificsun 11 days ago
I read that various writers and others would tell of things their kids got up to and some were written into episodes.
Like (1) Reply Delete

ELEANOR MrsPhilHarris 8 days ago
WOW! So this stuff really happened!!
Like Reply Delete

MrsPhilHarris ELEANOR 6 days ago
Apparently some of it. Probably exaggerated, but I can see kids getting into a lot of predicaments,
Like Reply Delete

Michael 11 days ago
So Ward never called the cops on the Beaver?
Like (1) Reply Delete

Pacificsun harlow1313 11 days ago
The lifestyle of what ... two dumb kids in the township of ... Mayfield.
Like (1) Reply Delete

Peter_Falk_Fan 11 days ago
6) Look out Beaver. Someone like Bookman (from "Seinfeld") could come knocking.

Michael Peter_Falk_Fan 11 days ago
Or the record club would come after him.
Like (3) Reply Delete

cperrynaples Peter_Falk_Fan 11 days ago
That was played by Philip Baker Hall who died just a few months ago!
Like (3) Reply Delete

RedSamRackham Michael 7 days ago
* Or the accordian company guy!
Like Reply Delete

Barry22 11 days ago
There was an episode where Beaver and Larry found a wallet, but they weren't in trouble, so I guess that doesn't count. How about the unaired episode where The Bloody Five's meth lab blew up?

cperrynaples Barry22 11 days ago
No that must have been Breaking Bad: The High School Years...LOL!
Like (3) Reply Delete