How a "violently and hilariously nervous" speaker brought Knotts back to being a funnyman. 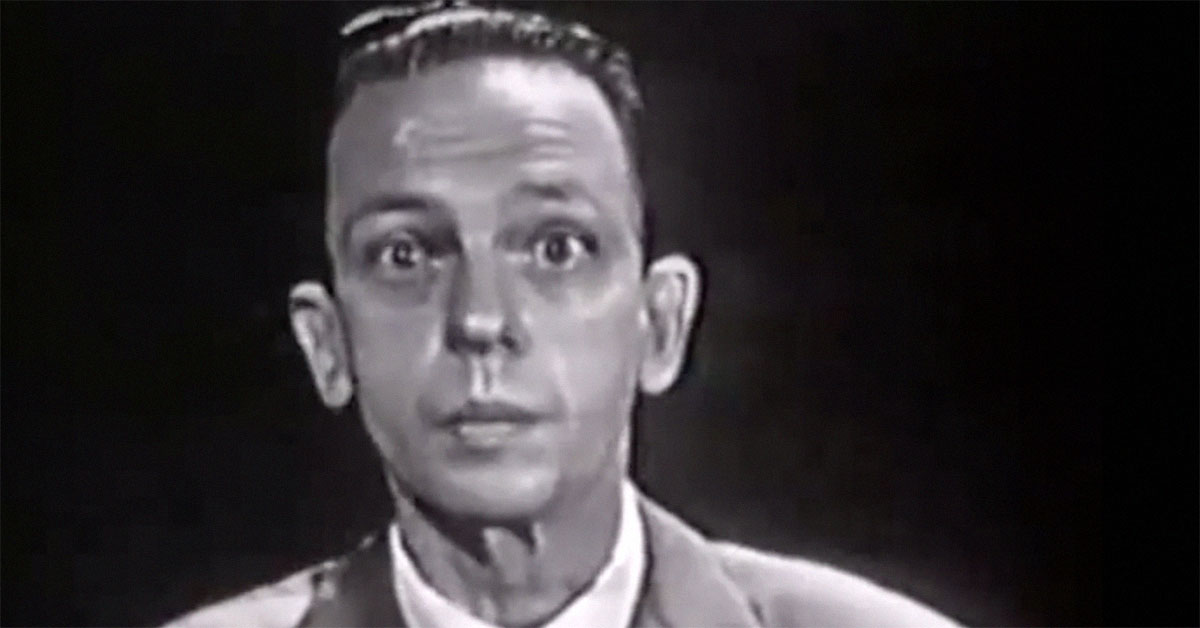 If you had to define Don Knotts' comedic shtick in one word it would be: shaky. Knotts relied on his knock-kneed characters throughout his career, from Deputy Barney Fife trembling in "Haunted House" to playing "Mr. Chicken" on the big screen. Heck, he even made called The Shakiest Gun in the West. Quivering was his stock and trade.

Roll the clock back to 1957. The spotlight was first shining on Knotts, who was making a name for himself as a new comedic star on The Steve Allen Show. For audiences, this scrawny fellow from West Virginia had pretty much come out of nowhere. Well, at least as a comic.

Because, believe it or not, Knotts began as a serious actor. It was a point made in every newspaper profile that popped up in 1957.

The Pittsburgh Sun-Telegraph twice used the adjective "jittery" in describing "thyroid case" Knotts in its piece "They're Steve's TV Bananas," which introduced both Knotts and his fellow Steve Allen Show newcomer Tom Poston.

"Don is a one-time serious radio and TV actor — he spent three years playing a psychoneurotic on the soap opera Search for Tomorrow," the author wrote.

Okay, so even in his "serious" work he was "neurotic." Not entirely far off.

A syndicated column for TV Key Features from that same fall of '57 further explained that Knotts had "started out as a comic and switched to straight acting for five or six years." 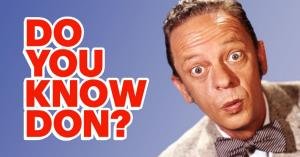 In hindsight, it's difficult to imagine Knotts playing it straight and serious. He had a physical demeanor built for comedy.

So what led him back to the land of funny? Watching someone suffer through stage fright.

A year or so prior to getting the gig on Steve Allen, Knotts made an appearance at a dinner banquet. He "watched the principal speaker of the night become violently and hilariously nervous." The poor guy was dying onstage. The paper notes that Knotts' heart "bled for the speaker," but the gears in his brain immediately began constructing a character inspired by the awkward orator.

Knotts brought the character to The Steve Allen Show, and his nervous persona became an immediate hit. It even dogged him in the street. He admitted to The Sacramento Bee in 1957 that people would greet him by asking, "Are you nervous?"

"I'll bet that, if and when I leave the Allen show, people will only think of me as the nervous comic," Knotts predicted. But he was not particularly worried about being typecast. He had trick. "One time, when I auditioned for a western, I sent in a picture of myself in a western outfit," he explained. "I was one of the first people selected."

How funny then that he would end up years later as "The Shakiest Gun in the West."

Knotts would be typecast as the nervous fellow, not that we're complaining. That awkward fellow first seen on Steve Allen (pictured up top) would pioneer and inspire an entire branch of "cringe" comedy. You see it so much it sitcoms today — uncomfortable characters. And to think, it all began with man bombing at a dinner banquet. 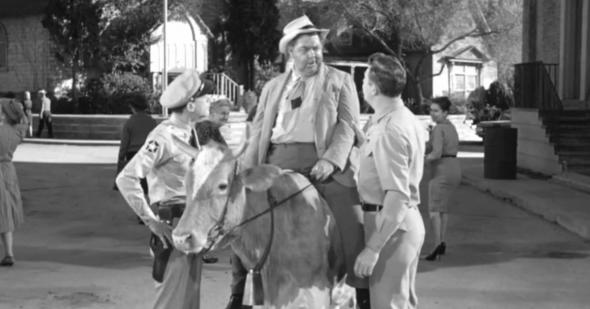 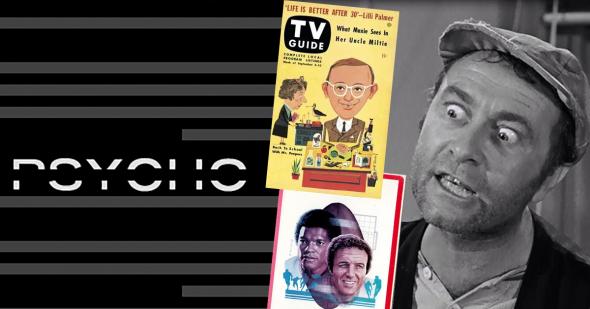 MayberryAunt Bee
Ever wonder what the ''T'' in Ernest T. Bass stands for? 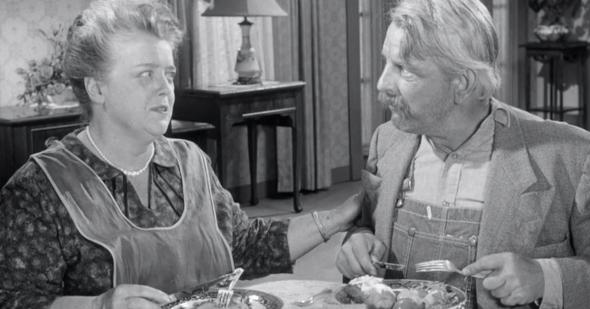 MayberryAunt Bee
Just once Denver Pyle wanted to play the guy who gets the girl
Are you sure you want to delete this comment?
Close

bilbosring 20 months ago
Interesting article but someone should have proof read it before publishing.
Like Reply Delete

RetroMountaineer 20 months ago
“Let me clarify this”: his nervous speech in “The Ghost and Mr. Chicken” is still comedy gold.
Like (3) Reply Delete

Jenny 20 months ago
I have so many of his movies. They are all funny... The Reluctant Astronaut, The Love God, Shakiest Gun in the West, and more..... all time favorite The Ghost and Mr. Chicken. It is a fun step back in time to watch and his shakes crack me up. Never knew how it started!

MikefromJersey Jenny 20 months ago
Hi Jenny,
I wish I had bookmarked it, so I'll have to rely on my memory but I ran across an article by
a major European reviewer about "The Ghost and Mr. Chicken". He said it captured like no other
the essence of the cliche small town America of the 1960's, from the opening shot of service
club signs like the Lions Club. The town gathering where Luther spoke, the "atta boy Luther"
line etc was pure Americana, the author then getting into complex social/democratic mores
blah blah that went way over my pay grade. Suffice it to say that this movie is celebrated
in the most unlikely intellectual circles in Europe, besides them embracing the humor.
I remember the author at the end challenged the reader to cite any other movie remotely
similar. I think this was a little over the top, the producers weren't trying to state some
grand message, but maybe by happenstance they happened to capture a moment, a
uniquely American one in the vein of Twain's immortal "Celebrated Jumping Frogs" yarn,
but not remotely in that league or of import. Maybe it is fairer to say that all the talent
behind the Andy Griffith Show reached their pinnacle here when they produced "Chicken".
Of course that's just my opinion, maybe I am full of "Chicken s---" as I am such a fan.
Like (1) Reply Delete

DoubleNaughtSpy 20 months ago
What a waste of bandwidth. Thankfully, no trees were killed in the publication of this totally worthless article.
Like Reply Delete

cookiegirl1957 Maverick66 21 months ago
Only one other I can think that compares, and that Charles Nelson Riley in The Ghost And Mrs Muir
Like (4) Reply Delete

FrankensteinLover 21 months ago
A Comic Legend, if you don't like Don You Can Nip it all the way in the Bud.
Like (6) Reply Delete

DoubleNaughtSpy FrankensteinLover 20 months ago
Sorry, but one "Well, doggies!" from Jed Clampett was worth a barrel-full of "Nip it in the buds."
Like (1) Reply Delete

FrankensteinLover DoubleNaughtSpy 20 months ago
They Both were Funny in their own Way, I love Jed as well. ALL Those Shows were much better than the Garbage on TV Now days. Give Me the Three Stooges, The Andy Griffith Show, The Honeymoomers, The Beverly Hillbillies, Gomer Pyle and I'm Good to Go.
Like (3) Reply Delete