When the Waltons creator rescued a dozen turtles, his wife had one question: "What are we going to do with them all?" 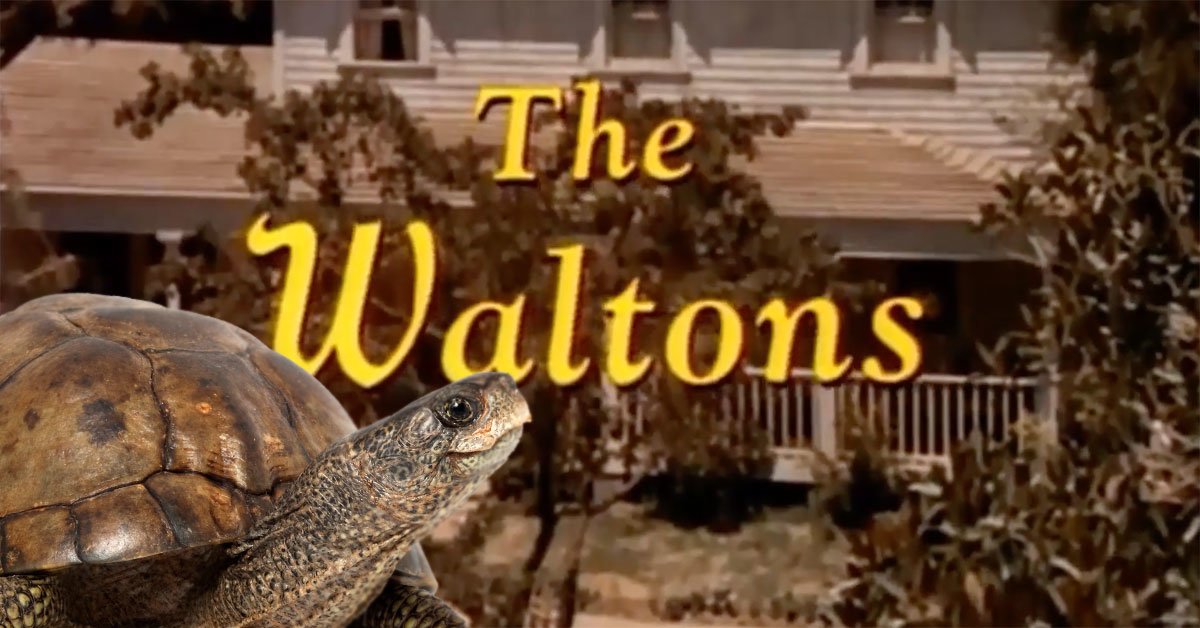 Before Earl Hamner Jr. became a top TV writer with his series The Waltons, he was just another guy who had left his family behind in New York to try to make it in Hollywood.

Renting a room in a hole-in-the-wall motel, Hamner brought only a turtle for company.

Even though the ratty motel put up with a lot from tenants who didn't respect the place, it turned out they had a strict no-pets policy. As soon as a maid discovered Hamner's hard-shelled stowaway, they booted him from his room.

Hamner wasn't about to get rid of his turtle, though, so he took this as a sign that it was time to bring his family to California. He rented a house and soon after got his start professionally, after submitting scripts to The Twilight Zone. Everything was uphill from there.

Perhaps the turtle knew it was time for them to move on?

You'd be surprised how much of Hamner's life can be boiled down to his love of turtles.

It's well-known that Hamner is a friend to all animals, and on The Waltons, we watched the family take in as pets a swarm that included Rover the peacock, Myrtle the goat, Calico the cat, Reckless the dog, Lancelot the fawn, Old Blue the mule, Chance the cow, and many others.

However, we think it's possible that in the whole animal kingdom, the turtle might be Hamner's favorite beast because he does talk about them an awful lot.

In Hamner's 1999 memoir, The Avocado Drive Zoo, he relates how his son warned him not to hit a bunch of box turtles when driving on a road trip. The father fondly likened the faces of the box turtles to Steven Spielberg's alien E.T. and wrote, "It was not a warning I needed. We are extraordinarily tuned in to animals in our family."

He then told a troubling story about how, further along the road, he and his son watched a motorist intentionally strike a turtle crossing, and how his son responded by wanting to save as many turtles as they could on the rest of the drive. They came back home to New York with a dozen turtles in tow.

"What are we going to do with them?" his wife asked, perplexed.

"We're going to release them in the garden," Hamner declared. "Give the place some character."

"They are kind of cute," his wife eventually admitted, especially fond of the smallest one.

To keep his brood of box turtles fed, Hamner planted a garden and fed them lettuce, carrots, spinach, and tomatoes, as well as a wild area for them to roam, with dandelion, pine trees, and flowers.

The turtles thrived in the home Hamner made for them, and you might be wondering if that turtle that he brought with him to California was one of them?

It sure was. In fact, it was his son's favorite turtle of the bunch.

The turtle's name was Hoaker and he seemed to be the most energetic turtle of them all.

Knowing that, you can see why there was no way that Hamner was going to let a motel’s "No Pets" policy keep him from holding onto the turtle he'd saved with his son, especially after he crossed the country so far from his loved ones. Hoaker was practically an extension of his family. Later in his life, Hamner told journalist Scott Holleran that his philosophy of family could be symbolized perfectly by a turtle.

"You come back to the family for sustenance and nurturing," Hamner said. "It's like a turtle shell; you do carry it with you—that sense of support. All of the Waltons really do intend and do get away [from the central family] — to marriages, to careers, to other parts of the world, but they're sustained by that early experience."

Do you think of your family as a turtle shell?

Nostalgia
Michael Learned's real-life kids wanted her to be more like Olivia Walton
Are you sure you want to delete this comment?
Close

Alex_Murri 24 months ago
I am making a good MONEY (500$ to 700$ / hr )online on my Ipad .Last month my pay check of nearly 30k$.This online work is like draw straight-arrow and earn money.Do not go to office.I do not claim to be others,I just work.You will call yourself after doing this JOB,It's a REAL job.

Or drag a file here to upload
texasluva 24 months ago
There is a Tortoise living today. It lives in Saint Helena and is 188 years old. It's name is Jonathan. It is the same Island that Napoleon Bonaparte was exiled (2nd exile) to and died. 50 years old when brought to St. Helena in 1882.
Like (1) Reply Delete

stephaniestavropoulos 24 months ago
METV asked the burning question: if "I think of my family as a turtle shell?" If by that are they including those who have passed? If so, then yes I do. My entire immediate family is up in Heaven. The 9th anniversary of the passing of my sister, Becky, is tomorrow: 1/22/2012. My dad's 8th anniversary, is 4 days later: 1/26/2013. My mom's 7th anniversary is 2/23/14. I love and miss them like crazy, but I know they are looking down on me. {At least I hope they are.} As is known, the tears don't flow as often or as easily as the years go by. But from what I have heard/read others having said, the passage of time doesn't {for some, for others it might,} diminish the sadness, the hurt and the void that their passing has caused and left behind. But keep smiling and thinking of the good times that were had, always seems to bring comfort, and helps one get through those depressing times, like I go through especially this time of the year.
Like (1) Reply Delete

harlow1313 stephaniestavropoulos 24 months ago
I tend to think of family as an umbrella, which helped keep the rain off. Sadly, that umbrella is down to bent wires and tattered fabric. C'est la vie.
Like (2) Reply Delete

stephaniestavropoulos harlow1313 24 months ago
You must not have thought very much of your family to compare them with tattered and worn out hunks of fabric and metal. That just doesn't sit well with me. To compare a non-living object, to those that were once living and breathing. That just feels cold, and cruel to me. If you had compared your family with something that once was living, but no longer is, I wouldn't fee this way. I liken the passing of loved ones like a tree. They are/were strong, gave me support, shelter me, give me strength and comfort like a tree can. An umbrella can only supply one of these feelings.
Like Reply Delete

harlow1313 stephaniestavropoulos 24 months ago
I am using metaphor. Most of my family is dead, therefore, that once protective umbrella, is now mostly gone.
Like (1) Reply Delete

Ilovelalaw harlow1313 21 months ago
Unfortunately, I know exactly where you and stephaniestavropoulos are coming from because I too have lost most of my family. There is just my younger brother, our aunt, uncle and their son and our two nephews and a niece who, sadly, we have not been allowed to have any contact with in more than 15 years. Their father committed suicide (not being able to have any contact with his kids was not the primary reason for his suicide but it definitely did not help.) There is also our late cousin, her daughter and grandchildren but we have had no contact with them in decades.
Like Reply Delete