Eat your heart out, reality television. The Andy Griffith Show did it first.

Mel Blanc may have earned the nickname "The Man of a Thousand Voices," but Howard Morris was certainly up there numbers-wise, too. You probably know him best as Ernest T. Bass on The Andy Griffith Show, but the actor was also the voice behind Atom Ant, Mr. Peebles on Magilla Gorilla, Mayor McCheese, Jughead Jones of The Archies, Gopher in Winnie the Pooh, and even a koala in Qantas Airlines commercials.

Oh, and he also voiced more than 100 characters on The Flintstones. 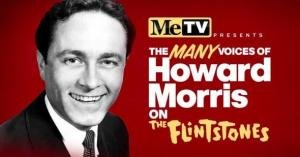 did you know?
Howard Morris voiced more than 100 characters on The Flintstones

Even in Mayberry, Morris sneakily played multiple roles. He turned up as a television repairman in "Andy and Helen Have Their Day," and could be heard as the radio announcer on WMPD - "The Voice of Mt. Pilot" in a couple of episodes, "The Family Visit" and "Barney's Bloodhound."

The later tale also gave Morris a chance to show off another of his vocal skills — singing. He was no stranger to belting tunes on TV. Two years prior, the Bronx native could be heard belting out "Eep opp ork ah ah!" as Jet Screamer on The Jetsons.

But in the hilarious "Barney's Bloodhound," Morris was an entirely different kind of crooner. He was Leonard Blush, "The Masked Singer."

That's right, The Andy Griffith Show had a Masked Singer long before it was a modern reality show sensation. Blush twinkles his piano keys and begins to coo, "Who is Sylvia—" just as a news bulletin interrupts the song to declare that a convict has escaped the state penitentiary. You can watch the scene in the clip above.

Blush is also mentioned in "The Song Festers." Alas, he is never seen! Not even in his mask. What kind of mask did he wear? Was he a giant banana or a bedazzled bear like on The Masked Singer? We'll never know. But we can imagine!

TheDavBow3 34 months ago
You haven't seen the last of Earnest T. Bass! He was so funny with Sid Caesar.
Like (2) Reply Delete

TheDavBow3 29 months ago
He did the funniest impression of early Elvis I ever saw.
Like (1) Reply Delete

TheDavBow3 Pilaf 29 months ago
I'd love to see that!
Like Reply Delete

Nala92129 1 month ago
I saw Howard's take on early Elvis. Hilarious! I laughed so hard, I had tears running down my face.
Like Reply Delete

madmark1 35 months ago
I don’t know if anybody remembers the old McDonald’s commercials but he was also the voice of the hamburgular.
Like (2) Reply Delete

utvols2069 35 months ago
He was an excellent director as well. he directed some of the best Hogan’s heroes episodes in the first season. You could tell by the up tempo of the cast and bob crane was more animated. Morris was a great talent.
Like (2) Reply Delete

cperrynaples 35 months ago
Howard Morris was not the only Masked Singer on '60's TV! Merv Griffin gave national exposure to a young pop singer working with his face covered! It was David Soul, later to star on Here Come The Brides and Starsky And Hutch! He even made the pop charts unmasked in the mid '70's! He's still alive, maybe he'll be a masked singer again!
Like (1) Reply Delete

cperrynaples cperrynaples 35 months ago
PS Yes, he is in "The Apple" episode of Star Trek!
Like Reply Delete

ricvice cperrynaples 34 months ago
He was a quite a talent. Unfortunately he passed away in 2005 RIP Howard
Like (1) Reply Delete