In a scene from M*A*S*H that fans frequently label as a goof, Frank Burns is yelling at Igor because the quick-tempered major says that he's wasting applesauce, spilling it when he serves it. "Apples don’t grow on trees," Burns says to Igor. Then, he barks: "What’s your name, fella?"

"Well, you're going on K.P., Maxwell," Burns says, pinching up his face in his weasely way.

Many M*A*S*H fans have pointed to this scene in the fourth season episode "The Price of Tomato Juice" as a minor error in the show's history. The character of Igor is played by actor Jeff Maxwell, and later on in the show, Igor's last name is better known as Straminsky.

Because of this, people attribute this supposed error to the actor, who they believe accidentally gave his real name instead of his character name, flubbing the line. However, the actor has since defended his honor, and in the book TV’s M*A*S*H: The Ultimate Guide Book, Maxwell is quoted with this explanation that confirms the truth: He didn't say his line wrong.

"I did not accidentally say my last name in 'The Price of Tomato Juice,'" Maxwell explained. "Maxwell was written in the script."

As proof that Maxwell was the name written in the scene, you could point to the fact that Burns also says the name Maxwell when he delivers his line, presumably not ad-libbing based on what he heard, but following what was written in his script, too.

In the book, Maxwell explained that writers knew they wanted to call the character Igor, and the longer he was on the show, the sharpening of his character led to a more fitting choice for a last name than "Maxwell," which the writers had perhaps hastily written into the script for "The Price of Tomato Juice."

"Straminsky was a later addition," Maxwell said, "Though it sounds like something I would have made up, I didn't. Some M*A*S*H writer had the good thought that Igor Straminsky made more sense than Igor Maxwell." 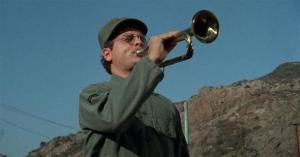 Did you know?Interview
Gary Burghoff explains that tricky bugle and cannon scene with Igor on M*A*S*H

Maxwell went on to say he agreed with the writers in making that choice and that he was able to lean more into the character with this new name.

"I like it because it gave me the chance to make the Igor character more of a Straminsky than a Maxwell," Maxwell said. "In truth, Igor, Igor Maxwell and Igor Straminsky were all written into M*A*S*H by the same folks who gave Radar's bear its name."

So that settles it: Jeff Maxwell did not flub his line in this episode. It was simply the writers experimenting with the identity of a new character.

Maxwell appeared in 83 episodes of M*A*S*H and is best known for playing Igor Straminsky (although another actor Peter Riegert stepped in to play the character a couple of times). On his podcast M*A*S*H Matters, co-host Maxwell once took listeners through a day in his life on the show. "I loved being out there, and I think most everybody did too," he said.

Maxwell was reminded that he had once told a story about how his first few days on set were not as rosy as he seemed to be recalling then, and Maxwell laughed, admitting he had to get used to certain things like extreme hot and cold temperatures when shooting on the outdoor set — and occasionally fighting off wasps for his lunch.

"There were moments when the yellowjackets would attack your food when you were eating lunch," Maxwell said. Then he made a joke: "But if you put sauce on the yellowjackets and put them on a piece of bread, you know, they weren't bad!"

"I was miserable," Maxwell said of his first day. "I hated every second of it. But when I realized what a cool job it was and how many fascinating, interesting people there were around me, that’s when everything changed."

He said it was uncomfortable shooting on location, where there were no real buildings to duck into if you needed to escape the extreme temperatures.

In the chat, Maxwell reveals that some sets served many purposes in this makeshift environment. In fact, the set used for the operating room was actually also used for storage of camera equipment and lights. And in the mornings, it also was a giant dressing room for all the extras you see in the background of episodes to get ready to appear on camera.

"The O.R. set was actually a dressing room," Maxwell said. He described how everyone would crowd into the operating room where they'd be fitted into their wardrobe for the day. "You go in the door as a civilian, you come out being in the army," Maxwell said.

There were also things he really liked about being on set. Like trips to the dining car.

"There was a trailer up around the corner of the set, and that trailer was set up and it was like a little diner," he said. "So you go in there, and a guy flipping hamburgers and egg sandwiches. I remember I couldn't wait to go get the egg sandwich. It was so good."

And that's how he sums up the entire time he spent on the show: "The whole experience was just gosh-darn good."

Did you know?1970s
Let’s recognize the only extra who committed to selling this dramatic M*A*S*H scene

Did you know?1970s
Is it out of character for Radar to have a tattoo? 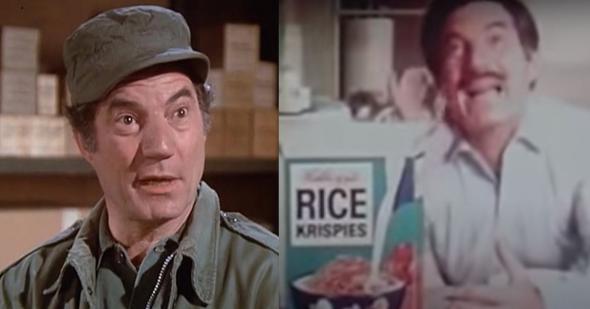 Commercials1960sFood
''No more Rice Krispies'' was once this M*A*S*H actor's worst nightmare
Are you sure you want to delete this comment?
Close

TijuanaSlim 7 months ago
Doylist: the Writers not having gone that deep at that point makes sense...

Watsonian: I'd have chalked it up to Igor blowing Smoke and giving Frank a fake name.. Frank is going Full Frank... so sending him on a search for "Cpl Maxwell" to re-assign to KP could be a ruse to distract him until he forgets ...

that said... wasn't Igor (by any name) Always on KP for the duration of the series?
Like Reply Delete

daDoctah 23 months ago
Any day now I expect to see a profile here of GW Bailey who played Sgt Rizzo on M*A*S*H. He too once played a Maxwell, police captain Felix Maxwell in the movie "Mannequin".
Like Reply Delete

kimmer 23 months ago
Great facts....thank you!
Like Reply Delete

MarkEd 23 months ago
I always kinda figured they changed his name from Maxwell, because of already having Maxwell Klinger.
Well, learn something new every day.
Like Reply Delete

surfer2002us 23 months ago
I was in 3rd grade in class when President Kennedy was shot, then I got up to watch Saturday morning cartoons and saw Oswald get shot on live TV. I was at home for the shooting of King and the 2nd Kennedy. I was watching the SF Giants beat the Dodgers when we landed on the moon. I graduated High School in 1973.
Like Reply Delete

WordsmithWorks 23 months ago
I always thought they were riffing on composer Igor Stravinski and that "Maxwell" was inadvertent.
Like Reply Delete

Hogansucks1 23 months ago
I always wondered ? - The location of the set, if that location was out in the foothills where Charles Manson and his followers spent time squatting after the murders- Parker ranch , if I recall ? 🙂
Like Reply Delete

WordsmithWorks Hogansucks1 23 months ago
I think that was Spahn Ranch.
Like (1) Reply Delete

PortelaJ 23 months ago
No disrespect to Winchester but bumblin’ Frank was the cherry on top for me as a M*A*S*H fan. “Pioneer Aviation, Pioneer Aviation”. LOL
Like (3) Reply Delete

cperrynaples 23 months ago
Don't remember that episode but I'm assuming that Igor pointed out that apples DO grow on trees! And wasn't he already on KP? Honestly, Burns was the Trump of the 4.077th! Yes, Winchester had more money, but we knew who was stupider...LOL!
Like (4) Reply Delete

MrsPhilHarris cperrynaples 23 months ago
"Burns was the Trump of the 4077th". That made me laugh!
Like Reply Delete

bevjima cperrynaples 23 months ago
I think this is the episode where Potter said he loved tomato juice. They were able to get him some and when he drank it, he broke out in a rash. He did love it but was allergic.
Like (1) Reply Delete

JDnHuntsvilleAL cperrynaples 23 months ago
The scene is available at the top of the page. NO, Igor did NOT correct Burns about the apple, he DID mention that "I'm already on KP, sir." to which Frank says "The minute you come off you're going on."
Like Reply Delete

WordsmithWorks cperrynaples 23 months ago
I have though that for a long time, except Frank Burns wasn't a draft dodger.
Like Reply Delete

cperrynaples WordsmithWorks 23 months ago
Yep, at least he didn't pretend to have bone spurs...LOL!
Like Reply Delete

TijuanaSlim cperrynaples 7 months ago
Looking at Igor's Face, that appears to be exactly what he's thinking... but he only verbalizes "but, I'm already on KP"
Like Reply Delete