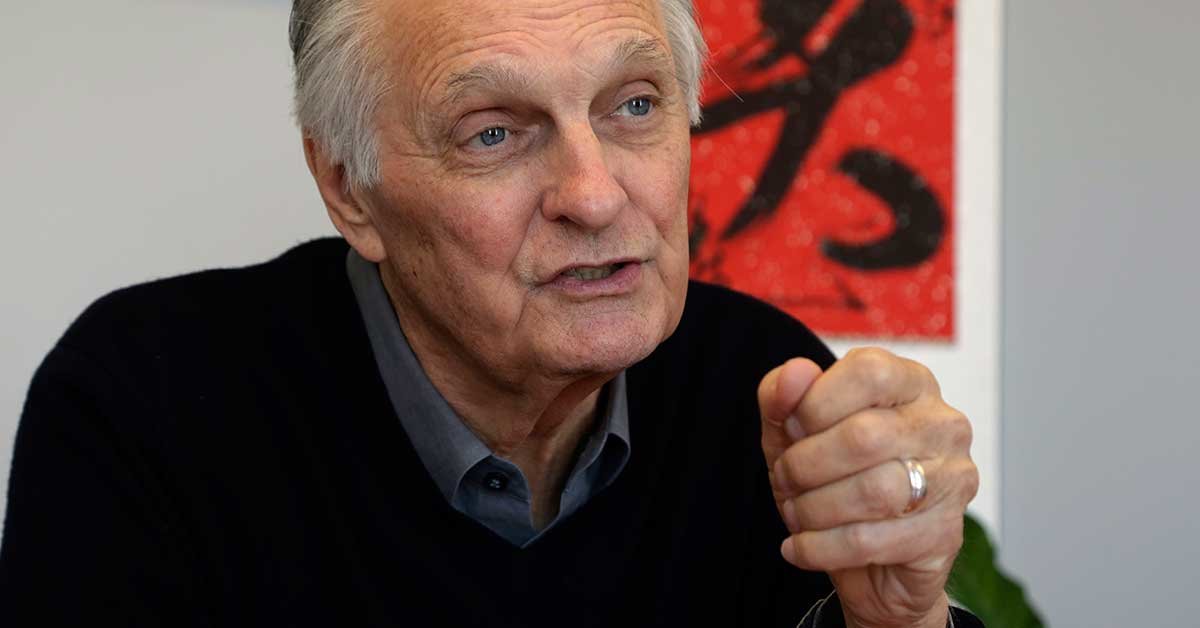 Fans have rewatched, read about and dissected M*A*S*H for decades. The Korean War dramedy remains one of the most beloved and watched television series in history. So you would think that everything that can be said about M*A*S*H has been said.

Not so. Put the cast together and stories spill. Earlier this month, Loretta Swit, Gary Burghoff, Mike Farrell and Jamie Farr — in other words, the surviving principal cast members of M*A*S*H — joined Alan Alda on his podcast, Clear+Vivid. The resulting conversation is a sheer delight and must-listen for anyone with a lick of interest in the show.

The chemistry between the old colleagues and friends is immediately audible. You can practically hear this smiles beaming through the microphones as the actors, spread out across the country, join in via video chat, telephone and whatnot. "As soon as we heard one another's voices, the kidding and the laughing began," Alda explains in his introduction.

Laughter abounds, and so do the anecdotes. We were reminded of some favorite behind-the-scenes yarns — and learned some fascinating new details about M*A*S*H.

The five recall the rather stark filming conditions on the Fox studio lot and on location in the mountains. Ventilation was poor in the Potter office set, to the point that Burghoff grew drowsy from the lack of oxygen. There was no access to telephones in the field, which led Alda to performing a bizarre line from a script with a typo. Six years passed before a bathroom was available on the stage. "McLean [Stevenson] had so many ants in his dressing room, one of his boots was moving," Swit recalls with a chuckle.

And then there was the peanut butter. The cast paid for its own coffee and peanut butter early on. Farr tells the tale of how the actors went to Sy Salkowitz, the onetime president of 20th Century Fox Television, and each slapped a $100 bill on his desk demanding more peanut butter. "Whatya want, smoothy, crunchy?" Salkowitz asked. The next day, a pallet of peanut butter showed up reaching from "the floor to the ceiling," according to Farr.

Speaking of Farr, he explains the origins of several of his memorable dresses, including a gold lame number once worn by Ginger Rogers. "That dress looked a hell of a lot better on you than it did on me," she told him in the commissary.

Oh, and while we're on the topic of the commissary, David Odgen Stiers once pulled a delightful prank on his coworkers involving frozen yogurt and Sir Richard Attenborough.

Burghoff explains the genesis of his character's name, Walter, which he came up with in tribute to a childhood friend. The real Walter is no longer with us, but Burghoff still emails his brother.

All in all, as we said, the conversation is heart-warming and revelatory. It's even fascinating to hear the performers detail the differences between working on modern shows versus the methods of classic television.

Listen to the full 68-minute episode, "The Actors from M*A*S*H — On How M*A*S*H Changed Our Lives," now via Stitcher.

ObituariesNews
R.I.P. Gene Reynolds, who went from The Little Rascals to co-creator of M*A*S*H
Are you sure you want to delete this comment?
Close

Pumpkinseed8 23 months ago
Never was a Mash fan but I understand others are. But I wish the would take it off MeTV. It’s past time. Same goes for Perry Mason and Matlock(although I’m a huge fan of them). I just think it’s time to change content around. When the channel first started, I remember Quincy ME was on. I’d like to see that again and Barnaby Jones, Starsky & Hutch, Streets of San Francisco, Baretta, Ironside, The FBI and The Mod Squad.😒
Like Reply Delete

KayJohnson 35 months ago
Awesome cast! Loved the show from beginning to end. My husband and I watch reruns whenever we can find them on TV. Never get tired of watching.
Like Reply Delete

PlanetTuck 48 months ago
Should have ended it after the third season, fourth season at the latest. They took all the funny out of it and the show became horrific. Just awful.
Like (1) Reply Delete

JeffTanner 48 months ago
I didn't know that Wayne Rogers, who played Trapper John McEntire, was dead. When did he die?
Like Reply Delete

Emma 48 months ago
So wonderful to hear them all 💜I teared up a bit when they spoke of those who are not longer with us. I grew up with show it started in 1972 when I was a sophomore in high school like. Glad to hear that they still keep in touch and are keeping busy😃
Like Reply Delete

pumkinheadfan 48 months ago
It was great to hear everyone talking and reminiscing. I'm thankful we the fans were given the opportunity to listen in.
Like (1) Reply Delete

JosephScarbrough 48 months ago
The way this article is written reflects very much what the experience of listening to this podcast was like: you can just sense the love and friendship these colleagues and pals have for one another as you listen to them share their memories and anecdotes from the work they enjoyed together all those years ago: you can really feel what they feel as they reminisce about what went on - you laugh along with them, and you feel emotions running high when they get a little choked up. A very wonderful little reunion.
Like Reply Delete

Paul 48 months ago
I loved M*A*S*H early on, but when some of the original cast left - Henry, Trapper, Frank - the series took a more serious and moralistic arc. There were terrific scenes and episodes later, to be sure (Col. Potter's "tontine" scene in particular), but generally the characters became one-dimensional. I especially found Margaret turning into a shrill harpy.
Like Reply Delete

JosephScarbrough Paul 48 months ago
Not to argue with you, but the characters certainly didn't become one-dimensional later on, because after the departure of original co-creator/producer Larry Gelbart at the end of Season 4, the remaining producers (Gene Reynolds, then later Burt Metcalfe) shifted the formula of the show from Gelbart's anti-war satire to character development, and as such, the characters really grew and expanded in later seasons. Hawkeye was becoming less of the nurse-chasing boozer and more of a grizzled war veteran; Margaret was becoming more and more human and more likely to join in on the shenanigans than scream at everyone and report them to the Colonel; Klinger became a regular guy and a lot more responsible and efficient, even though it meant we lost the funny, hairy guy who ran around in dresses.

Really, it didn't go off into more serious and moralistic areas until Burt Metcalfe and Alan Alda overhauled the writing and production staff by Season 8 - that's when the show really started to get dark and preachy. The middle seasons with B.J., Potter, Charles, and still Radar were still humorous and entertaining, but again, the humor became more character-focused and a little more sophisticated, as opposed to the more slapsticky, light-hearted anti-war satire that Larry Gelbart set as the tone.
Like (1) Reply Delete

Wiseguy JosephScarbrough 48 months ago
My favorite years were always the 4th-6th seasons. I didn't even watch the first three years regularly. I still watched the last five seasons and caught the first three in reruns but once BJ grew the mustache the characters and the writing just changed for the worse.
Like Reply Delete

wanderer2575 JosephScarbrough 48 months ago
@Joseph, I agree with you to some extent, but "dark and preachy" actually had its roots fairly early in the very first season with "Sometimes You Hear the Bullet." Gene Reynolds and Larry Gelbart made clear in documentaries their excitement at how that episode opened up new possibilities for the show. The specific tone may have been different had Alan Alda not gotten so involved with storylines, but one way or another it's clear that, regardless of who was setting the tone, the slapstick comedy of the first three seasons was not going to continue.
Like Reply Delete

Greg 48 months ago
Sad to see that Alda has Parkinson's great cast and show.
Like Reply Delete

DouglasMorris 48 months ago
that was a wonderful interview!
Like Reply Delete

Barry 48 months ago
I would love to meet you all before i go away to that resting place. I've watched this since its air date. I have so many good things to say to you folks about how happy you made me when i was feeling down and tuned in to watch M.A.S.H.
Like Reply Delete

karenjr 48 months ago
I was puzzled about that sentence also. It is just poorly written. Should have been : "Burghoff still emails his friend's brother."
Like Reply Delete

RedjacArbez 48 months ago
Burghoff explains the genesis of his character's name, Walter, which he came up with in tribute to a childhood friend. The real Walter is no longer with us, but Burghoff still emails his brother.??

THIS MAKES NO SENSE...WHAT DOES EMAILING YOUR BROTHER HAVE TO DO WITH A DEAD FRIEND?

Barry RedjacArbez 48 months ago
I read it like burghoff emails his friend who isnt here brother. Moron..
Like Reply Delete

Me2 Barry 48 months ago
Why moron??
Like Reply Delete

Wiseguy Me2 48 months ago
He was talking to a mirror. Only a moron could write a non-sentence like "I read it like burghoff emails his friend who isnt here brother." Doesn't even know that you capitalize names.
Like Reply Delete