Meet Dave Nimitz: Inside the Collection 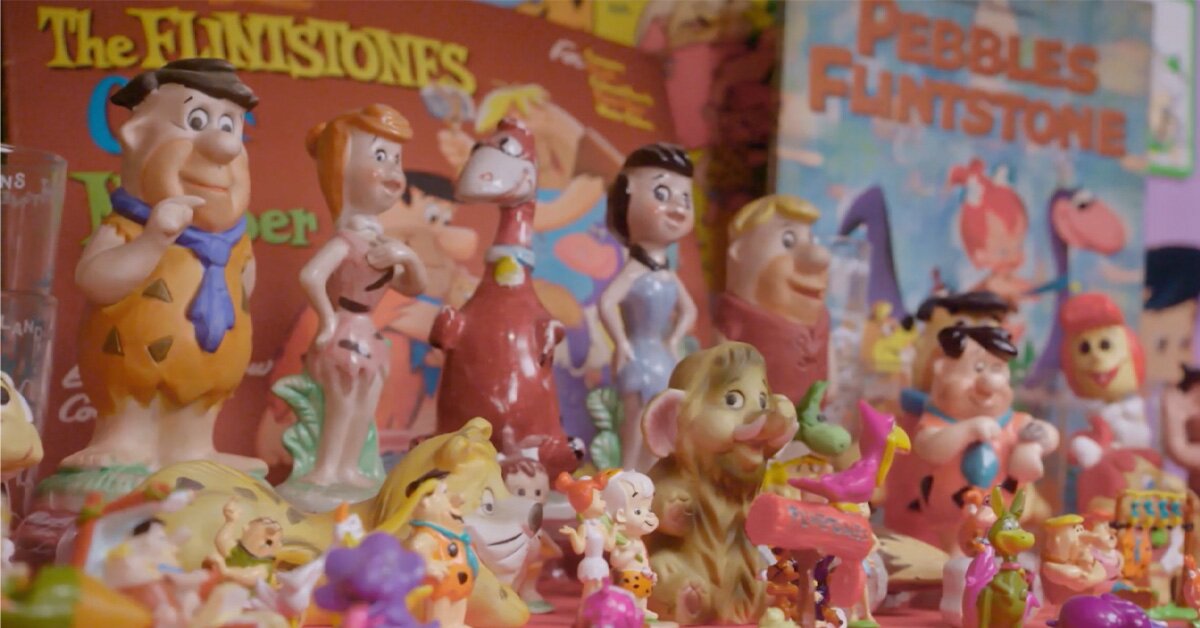 Dave's love for collecti-rocks (that's collectibles if you're not from Bedrock) led him to a career as an ink and paint artist, working on blockbuster films!

Our host, Lisa, steps back to the Stone Age with Dave Nimitz and his impressive collection of The Flintstones memorabilia. Dave’s mother inspired him to begin collecting at a young age, and her support paid off with a floor-to-ceiling collection dedicated to America’s favorite cave-family. From rare collectible figurines to a plush doll gifted to him by Joseph Barbera, the creator of The Flintstones, Dave’s collection spans the globe. Our collector finds himself at a crossroads when toy expert Mark Huckabone offers to trade a breathtaking piece of original artwork for not one, but two rare boxed games. Will these two toy fanatics strike a deal? 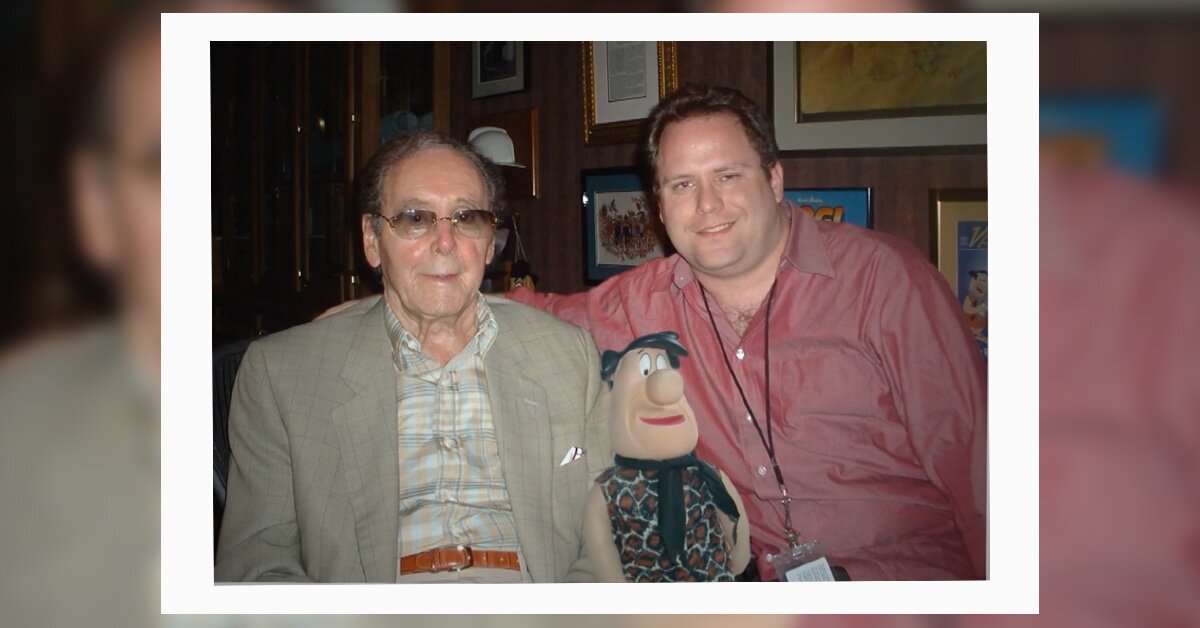 This isn't just any Fred Flintstone doll. It's one right out of the office of The Flintstones co-creator Joseph Barbera! Dave would run into Barbera frequently while working with Warner Bros., the company that owned Hanna-Barbera at the time. Barbera made frequent visits to the Warner Bros. studio for autographs and to greet everyone. This Fred doll has plenty of value and fame, often seen in publicity photo shoots of Barbera in his office. The hand-delivered doll could be worth a few hundred rocks! 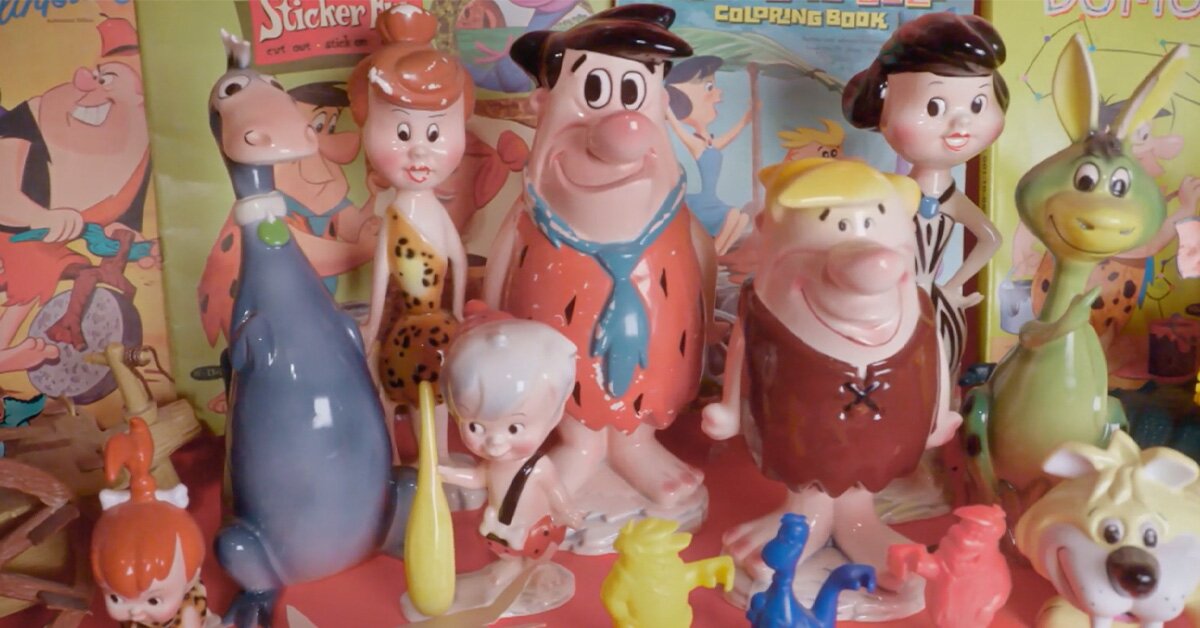 It's taken Dave several years to accumulate so many of these Cuernavaca figurines from 1975, items that have grown more and more popular for Flintstones collectors. These figurines were sculpted from the original models, and if they were sold as the complete set, Dave could double the roughly $2,000 he has invested in them! 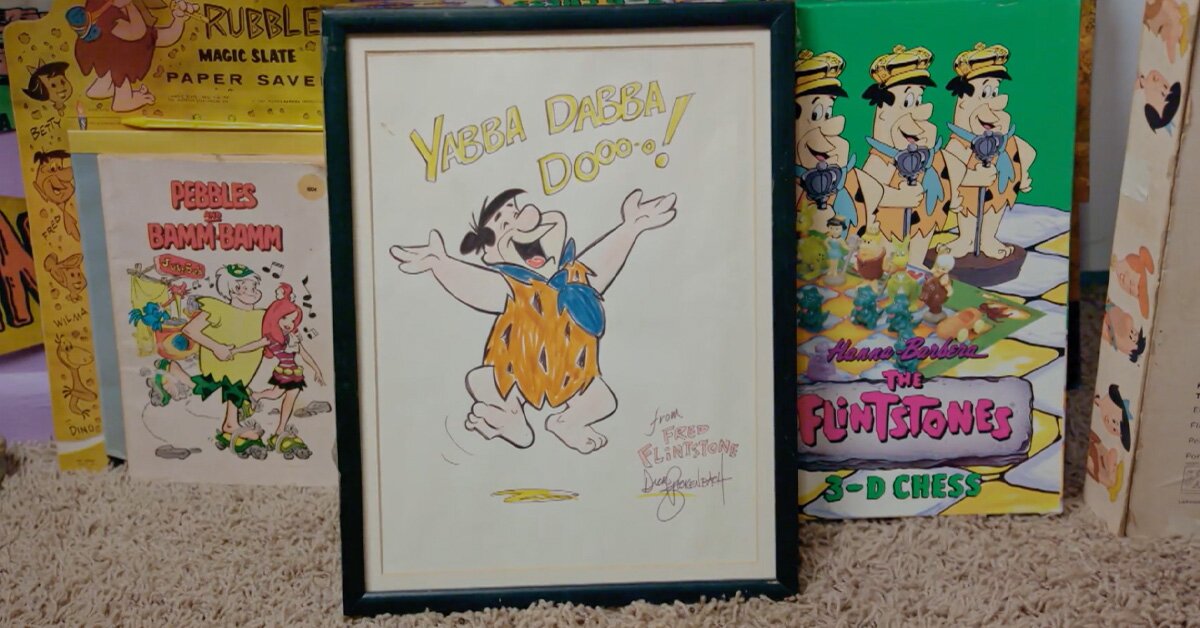 Dick Bickenbach was in charge of animation layout for The Flintstones, creating the look of the show and thinking of all the details we saw in Bedrock. Dave and his mother met Dick, who drew this image of Fred right in front of the then 10-year-old kid! Dave didn't realize that the person drawing Fred and his iconic catchphrase had such a strong influence on how the show looked, making this piece of his collection that much more valuable! 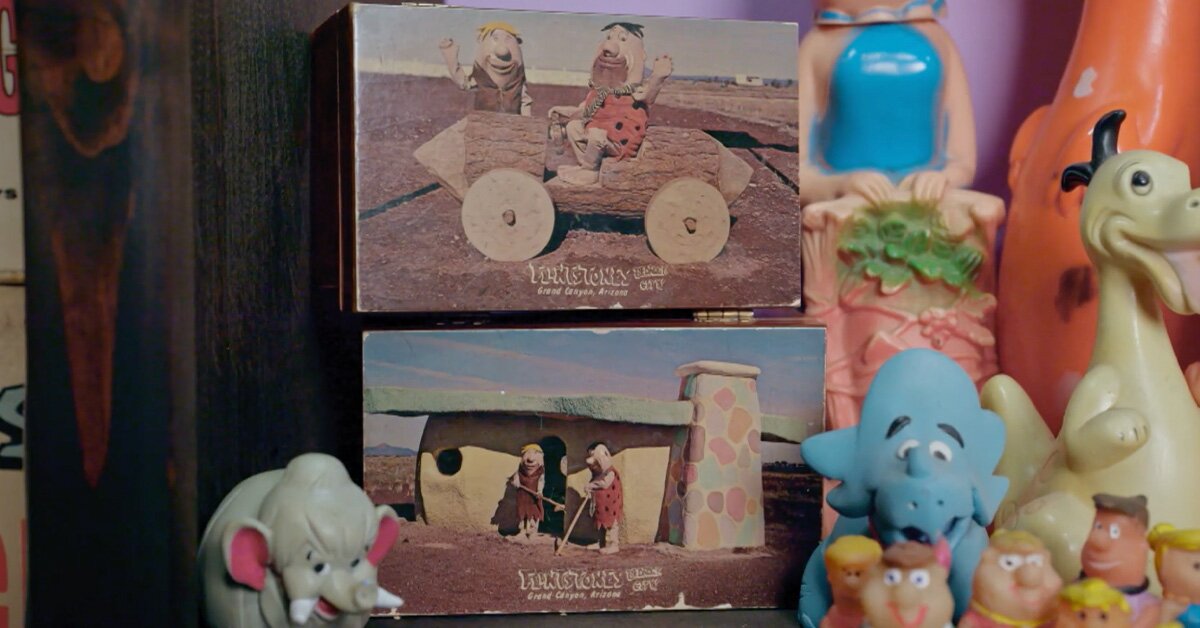 "From the town of Bedrock City." That's where Dave scored these location and Flintstones-themed cedar boxes, while on a road trip in the early Eighties! Grand Canyon Bedrock City was a roadside attraction in Arizona that featured houses shaped like, you guessed it, rocks! Pieces of The Flintstones could be found everywhere in Bedrock City. Dave once traded these boxes to another collector, but had to buy them back shortly after. Could they be on the trade stone again?? 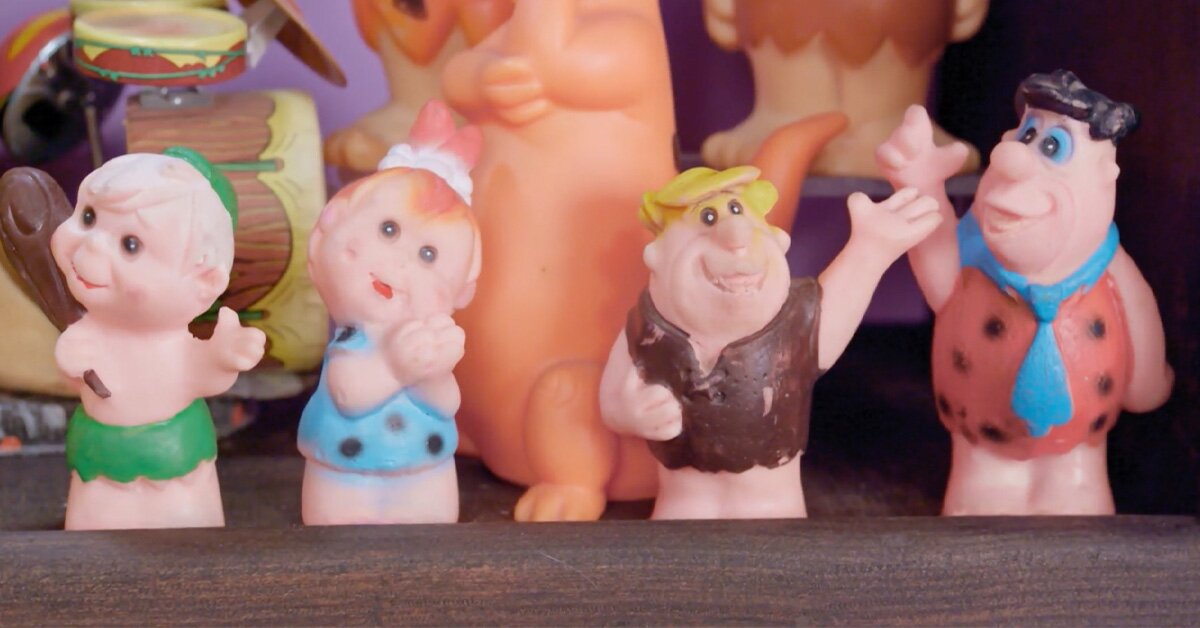 Dave is no stranger to making a trade when he sees something he wants! He traded items that were worth up to $400 for these hard-to-find vinyl figurines. Our expert believes there is a solid-rock market for these figurines, and could sell for about $500! Dave has wheeled and dealed his way to the massive Flintstones empire he has now, making him a Collector's Call natural! 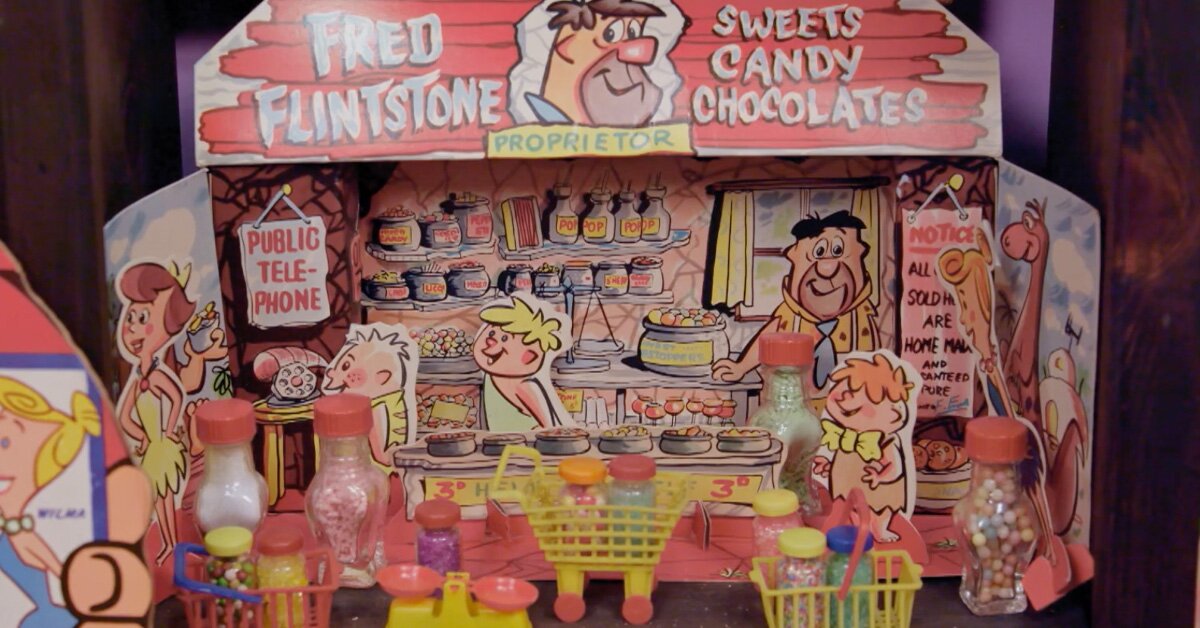 This item from the UK turned out to be Fred Flintstone's backup career plan! Dave acquired this Sweet Shop only a few years ago. The bakery includes jars of candy, with the original candy pieces still intact, along with the well-preserved character cut outs. This little shop could go for up to $700!

Tags: The FlintstonesToon in with MeCollector's Call
Are you sure you want to delete this comment?
Close

top_cat_james_1 5 months ago
Hey, producers of "Collector's Call"--Could you stop revealing what the items up for trade at the program's conclusion will be at the beginning of and during the episode? In the earlier seasons, it was more fun to have them sprung on the viewers alongside the collector.
Like Reply Delete