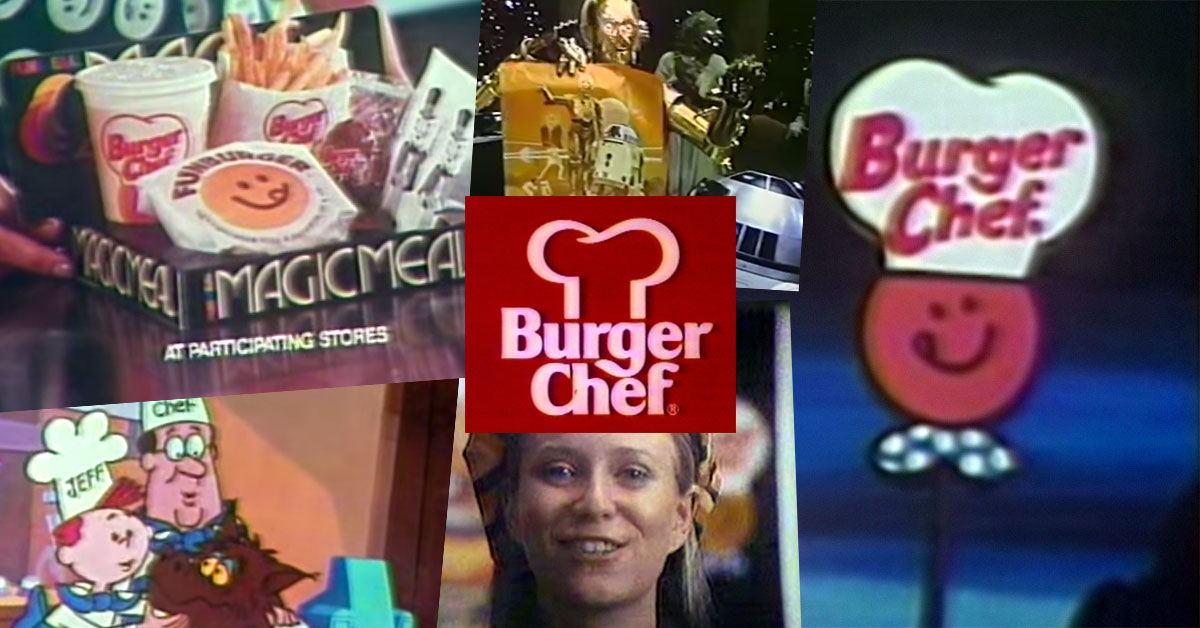 The Burger Chef chain was gobbled up by Hardee's in 1981. It was a surprisingly swift end for a fast-food empire that had expanded to more than 1,000 locations across the United States in the Seventies. Grabbing a bite at Burger Chef was a big part of growing up in that decade.

Boy, how we'd like to see the inside of a Burger Chef again. The closest we've come is the final season of Mad Men, when Don, Peggy and Pete break bread (well, buns) in a perfectly reconstructed Burger Chef. That scene really pushed our nostalgia buttons. And made us hungry.

But Burger Chef was more than burgers and fries. The company was pioneering. Here are some things we really miss about the place. 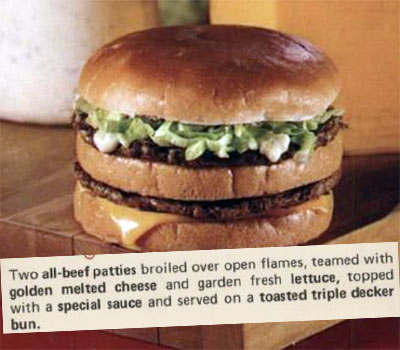 "Two all-beef patties…," special sauce… er, lettuce, toasted triple decker bun. It may look and sound rather similar to the Big Mac (introduced in widely in 1968) but the Big Shef had some differences. No pickles, onions or sesame seeds. That made a difference for some finicky kids. What was it spelled with an "S"? Good question! We don't know! 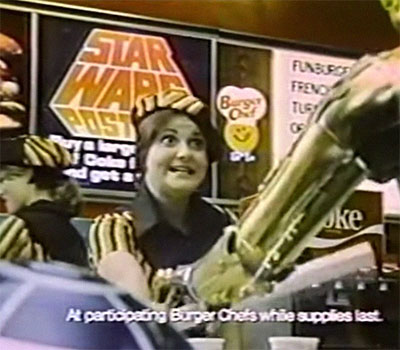 In 1977, Star Wars partnered with Burger Chef for a blockbuster promotion. McDonald's was probably kicking itself for missing this tie-in. A series of four beautiful painted posters — spotlighting Luke Skywalker, Darth Vader, Chewbacca, and the droid duo of C-3PO and R2-D2 — were made by artist Del Nichols. You could get one with a large Coke, which cost just 49¢ back then! 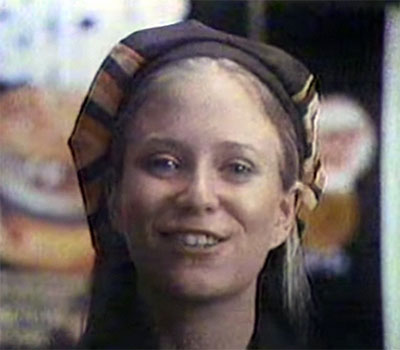 Yep, that's Jan Brady! The middle child appeared in a Burger Chef commercial (and uniform!) in the late 1970s, also circa 1977. The Brady Bunch Hour had ended its run in 1977, but it would not be too long until she returned to the role in 1981's The Brady Girls Get Married. 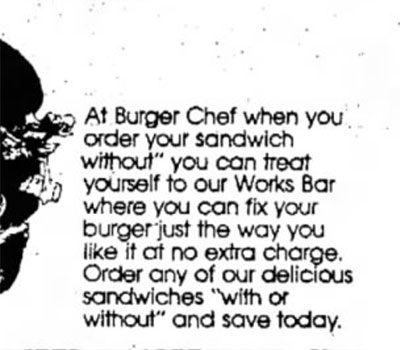 When you ordered your burgers "Without" they came plain. This was ideal. Because that allowed you, the customer, to top the burger to your stomach's content at the "Works Bar." The toppings station even included tartar sauce. In case you wanted to put a ton of tartar sauce on your burger. Hey, to each their own. 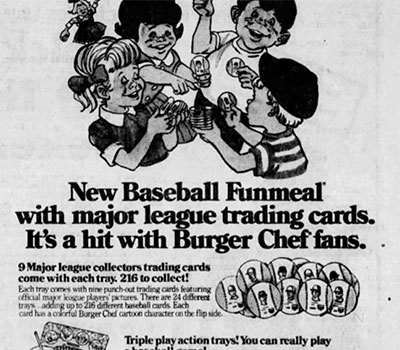 Burger Chef did beat McDonald's to the punch in several key areas. Take the kid meal, for example. Burger Chef's "Funmeal" predated the Happy Meal (introduced in 1979) by several years. In fact, Burger Chef would take legal action against McD's over the similarities between the Funmeal and Happy Meal. In 1976, Burger Chef served up a patriotic Funmeal (some packaged inside Abe Lincoln's "log cabin" box) for the Bicentennial. There was a Magicmeal with magic tricks. We particular love the Baseball Funmeal, which came with circular baseball cards (216 players to collect!) and a game on the box. 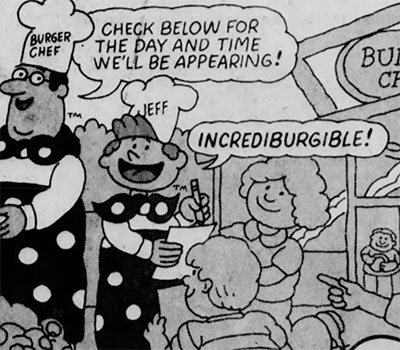 The primary mascot of Burger Chef was, obviously, the Burger Chef. But don't overlook his young mascot "Jeff." Actors dressed as the characters would make appearances at roller rinks and restaurants to sign autographs. Burger Chef really catered to kids.

7. All the Other Characters 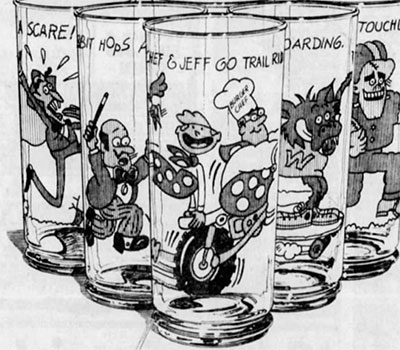 Burger Chef and Jeff had a robust gallery of friends and foes, much like McDonaldland. They brought to mind the "Monster Cereals," really. There was the balding magician Burgerini, Count Fangburger, the orange talking ape Burgerilla, the monstrous Crankenburger, and the Werewolf. Crankenburger even had his own (flexi) record. 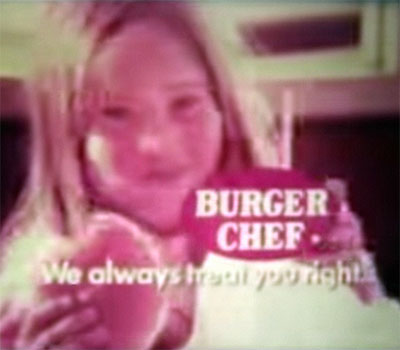 Every chain needs a catchy slogan and chorus. Burger Chef started the Seventies with a breezy, folky tune that promised, "We always treat you right." Later, commercial actors sang, "You Get More to Like at Burger Chef." Near the end of its life, the chain simplified with "Nowhere else." Have any of those refrains stuck in your head? 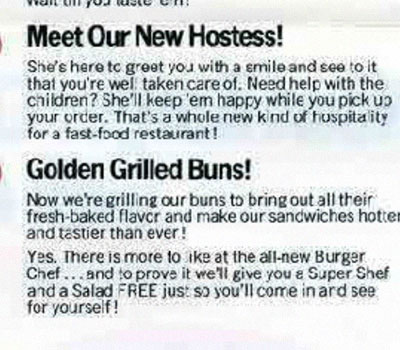 Now here is an idea you won't find at fast-food chains today — a hostess. "She's here to greet you with a smile and see to it that you're well taken care of," an ad promised. The Hostess was a borderline babysitter. "Need help with the children? She'll keep 'em happy while you pick up your order." 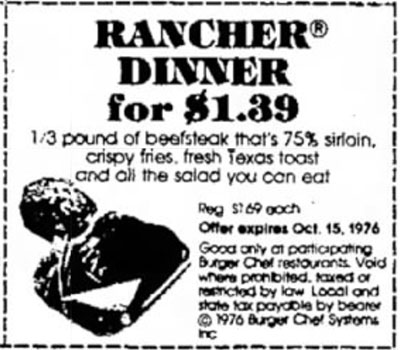 Ok, we end on a hungry note, with a unique meal that we could go for today. The Rancher Dinner served up 1/3 pound of beefsteak, fries, Texas toast and all-you-can-eat salad. For $1.39. Even for 1976, that was cheap. That translates to just about $6.50 today! 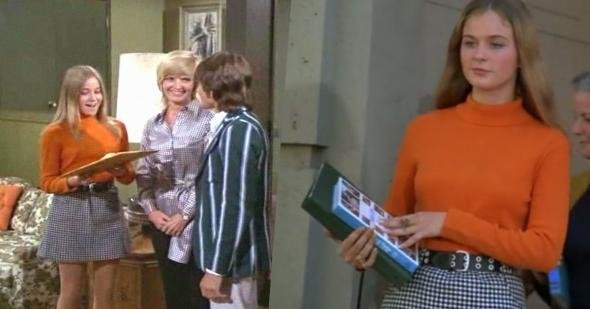 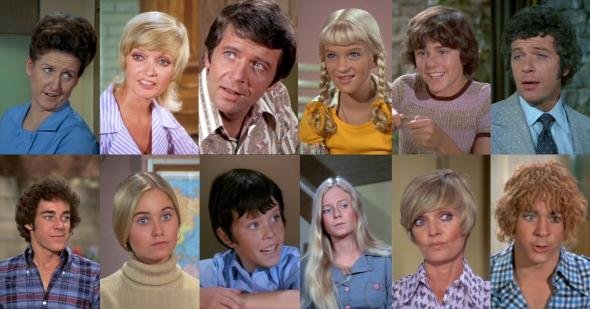 nostalgia1970s
Pick your favorite hairstyle for each character on The Brady Bunch!

nostalgia1970s
Remembering Florence Henderson’s wonderfully weird appearance on the first season of ‘The Muppet Show’
Are you sure you want to delete this comment?
Close

DIGGER1 1 month ago
I definitely wish that the "BURGER CHEF" food chain would come back!
Like Reply Delete

BradParnell 11 months ago
As the 1970s were the decade of my childhood, I loved going to Burger Chef. I still have some of the items from the Fun Meals from those days. There's another place besides Mad Men you can see the inside of a Burger Chef. If you check out the William Girdler movie, "Sheba Baby" from 1975 starring Pam Grier, you can see a scene where Pam goes into a Burger Chef. There are some nice outside shots as she enters the restaurant from the parking lot as well. That movie was filmed in my hometown though I hadn't visited that particular location it looks just like the ones I remember.
Like (1) Reply Delete

DIGGER1 327053 1 month ago
Tell me more about those murders that happened in 1978 in one of the Burger Chef places.
Like (1) Reply Delete

327053 DIGGER1 29 days ago
It was pretty sad. They have a good video about it on YouTube.
Like Reply Delete

Booboodoll 13 months ago
I remember when Fremont Ohio had 2 Burger chiefs. 1971 I was 5 years old and had my first experience eating Fast food at the one on the west side of town. I"m so glad that my parents took me there and not McDonald's I remember how cool the building look outside and also inside It really caught my attention. that's probably why I still remember Today. The building is still there today as a dairy queen. Inside the lobby, there are still some things from Burger Chief.

I use to love Burger Chef, their commercials seemed to be aimed at kids. As a picky eater, it was always hard to get a plain burger. Some places think a plain burger comes with mustard and ketchup.

TheSentinel denny 11 months ago
True, she had wanted to appear on that show as Jan but only wanted to do a limited number of episodes. When she was told she had to appear in all episodes of the first season with the possibility of the show going five seasons, she dropped out and was replaced by Geri Reischl as the fake Jan.
Like (2) Reply Delete

MichaelFields 14 months ago
I never heard of Burger Chef (I lived in the west coast so maybe this was a east coast thing) but from reading about it I REALLY one to go to one now, especially for the Rancher Dinner. Come on rich guys, bring this stuff back, THIS is what we really need now
Like (3) Reply Delete

kkvegas MichaelFields 14 months ago
I grew up on the west coast too. The only time I ever heard of Burger Chef was when it was featured on Mad Men.
Like (1) Reply Delete

KellyTenace 14 months ago
Great food when you're a kid. As an adult, junk food like these FF restaurants grind out takes a real toll on one's system. But again, it was great as a kid.
Like (2) Reply Delete

bre003 14 months ago
All these Hollywood reboots, they should try rebooting some of these franchises. Looking at you Red Barn.
Like (2) Reply Delete

Dave 14 months ago
We had a couple of Burger Chefs in Rhode Island; one in Pawtucket and one in Warwick. There may have been more, but those are the only ones I remembered.
Like (2) Reply Delete

AndreaZ Dave 13 months ago
I used to live in RI too and remember the one in Warwick on Post Road by the airport. My brother worked there briefly around 1980 and I remember the burgers and shakes were so good.
Like (1) Reply Delete

Arjay118 14 months ago
Thanks for the stroll down memory lane. We ate at Burger Chef a lot, because there were the coupons in the program you got at Painters Mill Music Fair (in Owings Mills, Maryland).
Like (1) Reply Delete

PencilSharp 14 months ago
"In case you wanted to put a ton of tartar sauce on your burger.
Hey, to each their own."
Hmph.
HARRUMPH, I say!
I know a Big Boy in striped pants with a slingshot who'd like to have a talk with you, luddite author who cowers behind the "MeTV Staff" canard!
Anyway.
Ironic about the Star Wars posters, since Carl Jr's/Hardee's is the Imperial Death Star of regional chains. While I never met Burger Chef (or Jeff or Shef for that matter), I did become quite familiar with another of their victims, Roy Rogers, along with the "Double R Bar Burger" (ham, onion ring & BBQ sauce as burger toppings: GLORIOUS!) and his beloved "Fixin's Bar" during my time in Maryland.
Good times. Miss you, Roy.
Wish I'd met you, Chef. & most especially...
$#%@ you, Carl Jr!!!
Like (1) Reply Delete

MichaelSkaggs 14 months ago
Tragically the main reason a lot of people in Indiana remember Burger Chef is because of the BC murders in Speedway, Indiana (a suburb of Indianapolis), on November 17, 1978. Four high school workers were murdered by persons unknown. The motive is believed to be a robbery gone wrong because one of them recognized one of the robbers. No money or watches were taken from the victims. The BC was torn down and a loan office at the address. There's a memorial marker and four trees planted in their honor. The case is still considered to be an open one by the Indy PD and there's a $25,000 reward for information leading to the arrest and conviction of those responsible.
Like (1) Reply Delete

MichaelSkaggs MichaelSkaggs 14 months ago
It should read "and there is a loan office at the address". My bad.
Like (1) Reply Delete

KellyTenace MichaelSkaggs 14 months ago
It's a little ridiculous that editing one's comment isn't an option, huh? Best to just cut, delete and paste another one. That how I "edited" this one. :)
Like (3) Reply Delete

CouchPotato987 14 months ago
Never ate at a Burger Chef, they went out of business when I was just 1. Lol
Like (1) Reply Delete

CaptainDunsel CouchPotato987 13 months ago
So, are you SURE you never ate *at* a Burger Chef? [grin]
Like (1) Reply Delete

CouchPotato987 CaptainDunsel 13 months ago
Nope, they never had any Burger Chefs in Virginia, at least my mother never remembers any.
Like (1) Reply Delete

StrayCat 14 months ago
Ate at Burger Chef only occasionally, the food was halfway decent but ordinary. They never stood out from the others which is probably why they disappeared.
Like (1) Reply Delete