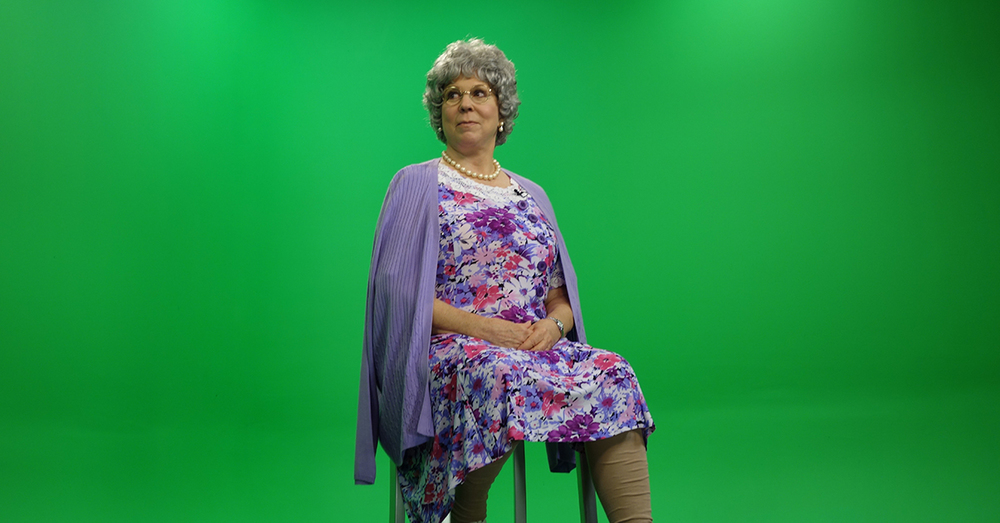 Good lord! Thelma Harper's clan has a rather unique history on television, moving from Carol Burnett Show comedy sketches to made-for-television movie to beloved sitcom. While the family members may have changed over the years, one constant throughout was Mama herself, brilliantly portrayed by Vicki Lawrence. To this day, Lawrence continues to revive the character for TV appearances (and for us, as you can see above).

We thought it was only fitting to revisit Raytown and unearth some delightful details you might not know about Mama's Family.

1. There was no pilot made. 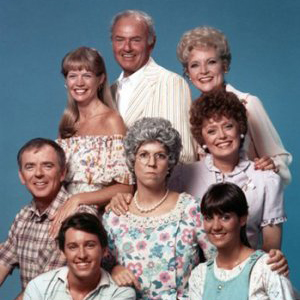 Each year, dozens of pricey television pilots go unseen as networks pass on the prospective shows. That's just how the biz works. What is far, far more rare — if not unheard of outside of this example — is a television show being ordered without a pilot. Producer Joe Hamilton sold the idea of Mama's Family to NBC chairman Grant Tinker over a game a golf. Not that NBC was buying the idea cold. The Carol Burnett Show's "The Family" skits and the popular 1982 television movie Eunice had established the characters and concept.

2. The show was canceled after its second season. 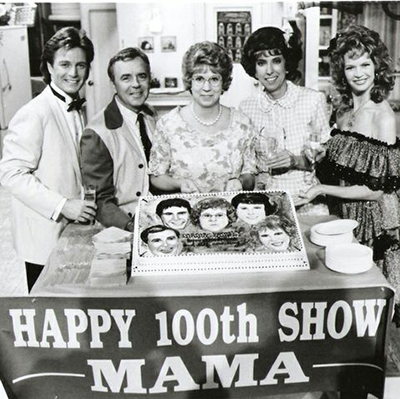 Getting the axe from a network doesn't always mean death. In 1984, NBC booted the Harper family from its lineup. The episodes fared well in summer reruns, however, and others took note. The recently merged Lorimar-Telepictures was on the hunt for first-run syndicated properties. Seeing life in Mama yet, the company ordered 100 episodes. Sitcoms like Charles in Charge, Silver Spoons and Webster would soon follow a similar path. Yet it was Mama's that would become the highest rated sitcom in first-run syndication.

3. Two different houses were shown in the opening credits. 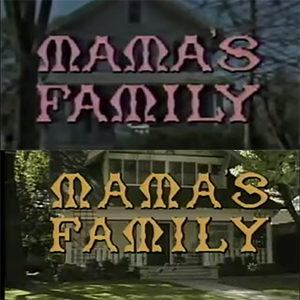 With the jump from network to syndication came several changes, some so obvious as departing cast members, and some as subtle as tweaks in the opening credits. In its initial run, the Harper home is a smaller abode. Additionally, the title graphic, originally pink, switched to yellow. In subsequent releases over the years, the original house has been replaced with the more familiar dwelling, but the color variance still differentiates the two runs. 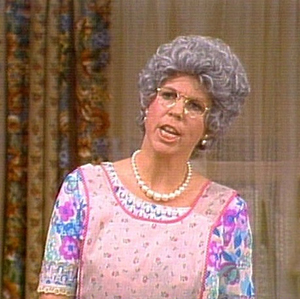 While we never hear them in the television show, there are indeed lyrics for "Bless My Happy Home." Lawrence has been known to perform them in concert. The tune features charming couplets like "Vichyssoise and escargot got nothin' on black eyed peas" and "home, where a Saturday night will cost you $12.98 and that's including the wine." 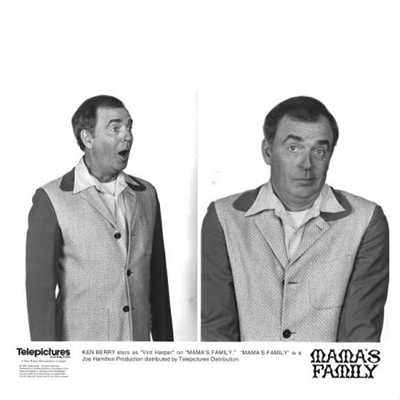 The members of Mama's family evolved as they went from comedy skit to TV movie to sitcom. In "The Family" sketches, Thelma has five children, including three sons, Larry, Jack and Phillip. In Eunice, the clan has been trimmed to three kids, with just one son, Phillip, played by Ken Berry. The F-Troop and Mayberry R.F.D. vet would go on to star as only son Vinton on the sitcom. The two Harpers inherited different genes. Phillip was a Pulitzer-winning author, while Vinton was a loveable dope. Check out more fascinating facts about Ken Berry.

6. Betty White and Rue McClanahan acted together before 'The Golden Girls.' 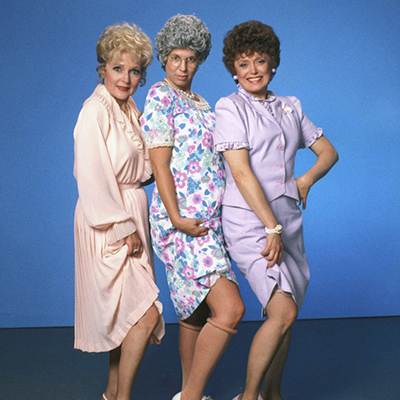 In the series' first run, Rue McClanahan played Mama's sister Fran Crowley, who eventually chokes on a toothpick at the Bigger Jigger. The incomparable Betty White was the eldest, elitist daugher Ellen. Though NBC might have seemed foolish for dumping Mama's Family, cancelling the show would prove fortuitous for the network in some ways. White and McClanahan were both free to jump aboard a certain new sitcom about three older woman living together in Miami. Initially, White was set to play the lustful Blanche while McClanahan was set to be the scatterbrained Rose, in no small part based on their prior roles. The two switched characters at the last moment.

7. The location of Raytown is never explicitly stated. 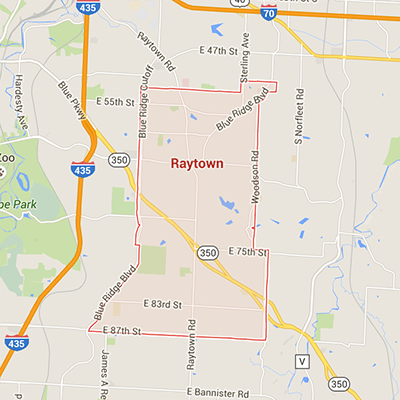 Much like Springfield on The Simpsons, the city of Raytown is never given a home state in Mama's Family. There are some references to "the Tri-State Area," but the specifics remain vague. Lawrence confessed the town is loosely based on Raytown, Missouri, a suburb of Kansas City. Still, the Harper family does not definitively live in the Show Me State. However, this did not deter the real-life citizens of Raytown from voting to erect a $10,000 statue of Mama.

8. Lawrence earned an Emmy Nomination for playing Thelma Harper… but not in 'Mama's Family.' 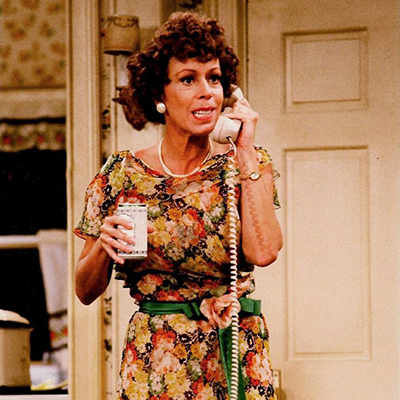 Lawrence earned a nomination for her Mama character after her work alongside Carol Burnett in the Eunice movie, not once for the sitcom. She lost the trophy to Penny Fuller in The Elephant Man.

9. Vicki Lawrence made a disco album. 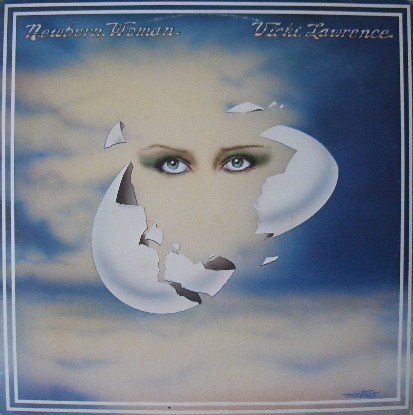 Lawrence is a multimedia star. Most remember her hit "The Night the Lights Went Out in Georgia," which reached the top of the Billboard Hot 100 for two weeks in 1973. The actress would continue her singing career throughout the 1970s, culminating in an overlooked album of light dance grooves dubbed Newborn Woman in 1979. 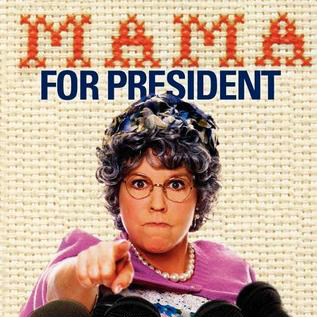 In 2008, Thelma Harper, who was briefly mayor of Raytown, announced her candidacy for President of the Unites States with the book Mama for President: Good Lord, Why Not? Her platform included building senior citizen homes along the border to police immigration. "Every time I enjoy exotic delicacies like Italian sausage, Polish kielbasa or German knucklewurst, I'm thankful foreigners have come to America and brought their weiners with them," she wrote. Might we see another run in 2016? 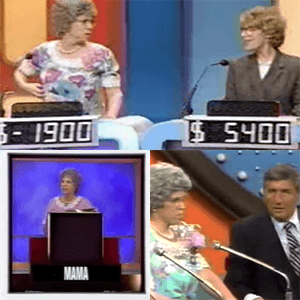 Thelma was a major fan of game shows — on Mama's Family and in the real world. Mama met both Alex Trebek and Richard Dawson while trying to win some money on the sitcom, while years later Lawrence continued to slip on the wig and house dress to pop up in character as one of the Hollywood Squares. Lawrence also hosted a game show in the late 1980s, Win, Lose or Draw, a Pictionary-like contest that took place on a set modeled after Burt Reynold's living room. 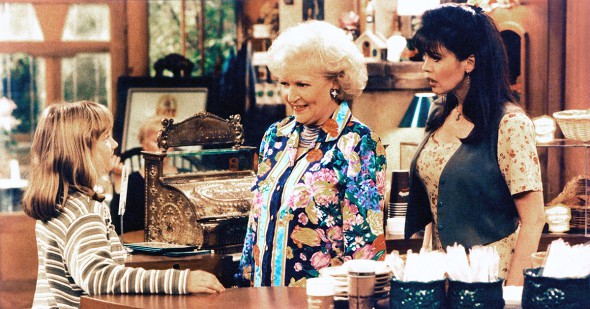 quiz
Can you guess the sitcom mom's maiden name?
Are you sure you want to delete this comment?
Close

EricFuller 16 months ago
Didn't Roddy McDowell play Phillip in a skit on Carol's show when Eunice, Ed, and Mama visited him in Hollywood?
Like Reply Delete

Ahnyis 19 months ago
I enjoyed this, however, one fact from it is not true. In the post, it says that Betty White and Rue McClanahan played in Golden Girls before 'Mama's Family', which is not true because Mama's Family aired before The Golden Girls did. After the two females left the show, they met again on the Golden Girls' set.
Like Reply Delete

KathyMcKinny Ahnyis 16 months ago
In the series' first run, Rue McClanahan played Mama's sister Fran Crowley, who eventually chokes on a toothpick at the Bigger Jigger. The incomparable Betty White was the eldest, elitist daugher Ellen. Though NBC might have seemed foolish for dumping Mama's Family, cancelling the show would prove fortuitous for the network in some ways. White and McClanahan were both free to jump aboard a certain new sitcom about three older woman living together in Miami. Initially, White was set to play the lustful Blanche while McClanahan was set to be the scatterbrained Rose, in no small part based on their prior roles. The two switched characters at the last moment.

WHERE is the part about Rue & Betty acting in the GG BEFORE Mama's Family.......I can't find that part.

Wiseguy Ahnyis 16 months ago
What was written was that Rue McClanahan and Betty White appeared on the Golden Girls before the SYNDICATED RUN of Mama's Family and thus could not appear in those episodes.
Like Reply Delete

barefeethusky 36 months ago
Mama also appeared on three other game shows. Prior to Mama's Family she was on Password Plus. Vicki and Carol appeared as Mama and Eunice along with McLean Stevenson and Joanna Gleason as their Hello Larry characters for a special celebrity week. Thelma was also a contestant on the Tri-State Lottery Show during a syndicated episode of Mama's Family where she spun the wheel for a chance at one million dollars. Finally, she appeared on an episode of Are You Smarter Than a 5th Grader? where she won $8000 for charity.
Like (1) Reply Delete