"Goodbye, Farewell and Amen" set ratings records and affected New York City plumbing. Did you know it was not the last 'M*A*S*H' made? 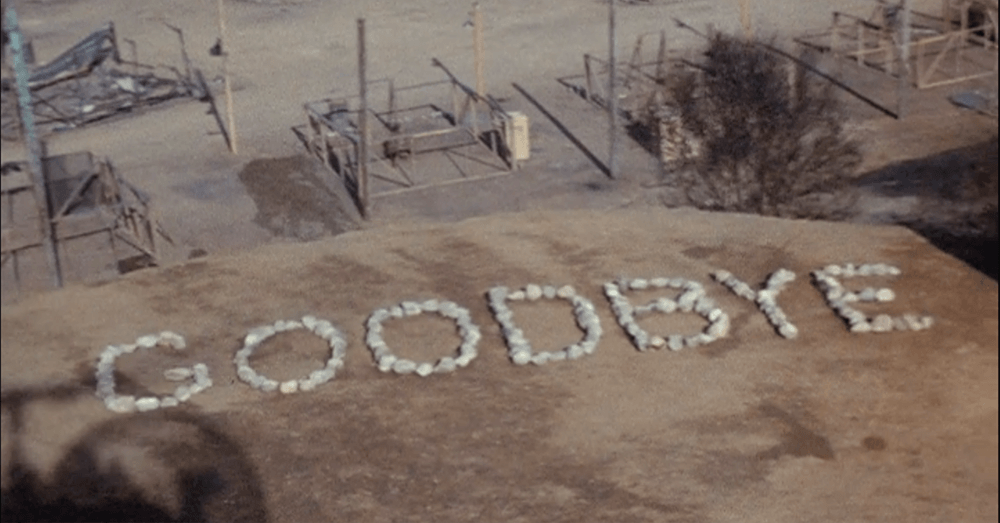 B.J. spelling out "GOODBYE" in stones. It gets us every time.

The M*A*S*H finale got most of America at the time, too. "Goodbye, Farewell and Amen" received a gargantuan 60.3 rating and 77 share, luring well over 100 million viewers. A whopping 105.9 million people watched on average over the two-and-a-half hours, with that number peaking at 121.6 million in the final six minutes. Yes, that means that about 20 million people only caught the ending.

That makes it the most viewed television finale of all time — only Cheers and The Fugitive come close — and one of the most viewed television broadcasts in American history. Only Super Bowls can top the M*A*S*H numbers, and that is likely to remain the case forever.
While the numbers are impressive, what makes "Goodbye, Farewell and Amen" endure are the emotions. Simply put, the long ending stuck the landing.
Here are some interesting factoids about the epic finale.

1. Alan Alda and Loretta Swit are the only actors in both the first and final episode 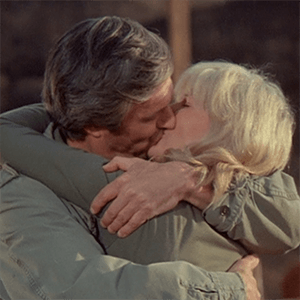 It's hard to believe considering the sprawling cast. Alda is the only actor to appear in every single M*A*S*H. Alda also directed the finale, one of 31 episodes he helmed. His first time behind the camera for M*A*S*H was "Mail Call" in season two. George Morgan, not William Christopher, played Father Mulcahy in the first episode.

2. It was the only episode to feature an on-screen title 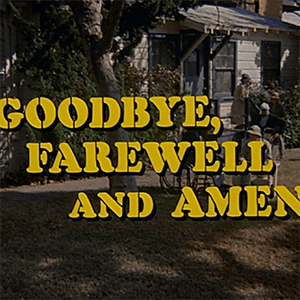 As with B.J.'s message written in rocks, the show was bidding adieu and thank you to its audience with this title screen. It's a shame they didn't show the title more often, as they were frequently poetic and clever. "Abyssinia, Henry" is great of course. We are suckers for puns like "The Novocaine Mutiny" and "Gorilla My Dreams," too.

3. A real fire at the Fox Ranch was worked into the script 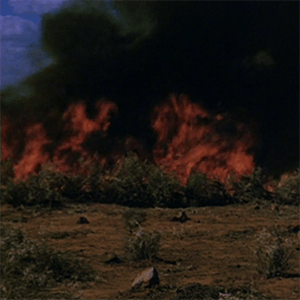 The finale was originally slated to run 90 minutes. An unfortunate brush fire broke out at the Fox Ranch set in Malibu Creek State Park. The blaze was filmed and worked into the script, padding out the show with an extra 30 minutes. Considering 30-second commercial blocks for the February 28 airing were selling for $450,000, the network likely had no complaints.

4. It featured the most writers of any episode 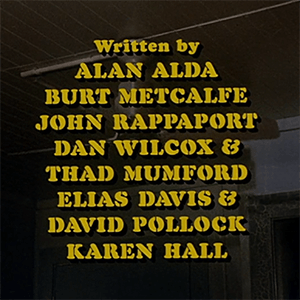 What is it they say about too many cooks? Fortunately, this broth was far from spoiled. According to writer David Pollock in the book TV's M*A*S*H: The Ultimate Guide Book, the writing duties were chunked out: "[Elias Davis & I], with Alan, wrote the first half-hour of 'Goodbye, Farewell and Amen.'"

5. It was filmed early in that season's production schedule 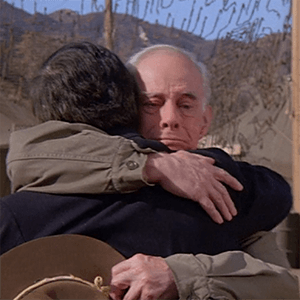 In case you need more evidence of how great this cast was, look at the emotion on their faces as they say goodbye. It feels as if you are watching the last minutes the actors are spending together. That was not the case. "Goodbye" was shot early in the season. They had to wear and wipe those emotions, and then carry on to craft a handful of other episodes.

6. "As Time Goes By" was the last episode filmed 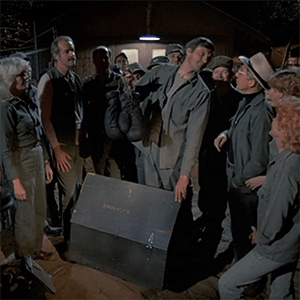 So, you are wondering, what was the finale episode to be filmed? That would be the penultimate entry, "As Time Goes By." The final scene shot was the time capsule bit. As Arlene Alda explains in the photo book The Last Days of M*A*S*H: Photographs and Notes, the cast actually buried a time capsule to commemorate the end of production. Can someone go dig that up?

7. The finale affected the plumbing in New York City 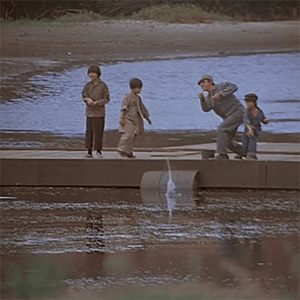 Sometimes urban legends are true. So many people rushed to the restroom after the ending, the subsequent pressure drop from flushing toilets caused a surge in the tunnels that bring water from the Catskills to New York. So, if this happens again, remember your local utilities and pause the show early and often on your television to give the plumbing a break.

8. A M*A*S*H Smithsonian exhibit opened five months after the finale 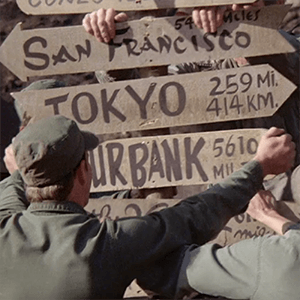 This is to underline the cultural impact of the show. The Smithsonian opened the "M*A*S*H: Binding Up the Wounds" exhibit in the summer of 1983, and it ran for a year and a half. Bert Allen, the set decorator from the series, went to D.C. to set up replicas of the O.R. and the Swamp. Allen kept the signpost from the set for years. It sold at auction in 2005 for $25,000.

coffeecup 9 months ago
As for the tv series MASH I have never sat through an episode. My mom was in WW2 as an army nurse and felt the show wasn't true to the medical life she witnessed.
Like Reply Delete

PDCougar 9 months ago
Hey, MeTV: For some truly fitting programming for next Veterans Day, could you pursue obtaining episodes -- or even the entire series as a 15-hour marathon -- of "AfterMASH"? (And maybe include Gary Burghoff's "Walter" pilot?)
Like (4) Reply Delete

AarHandy3 PDCougar 9 months ago
Yeah, in time for the 50th Anniversary! 🥳🧁🎈🎉
Like Reply Delete

Zip 9 months ago
5. It was filmed early in that season's production schedule

Yeah, that must have been hard to have filmed the final episode and then have to go on and not let that knowledge get to you filming other episodes.

pearlone 9 months ago
I moved into my condo the night this aired. We sat on the floor, surrounded by boxes watching the show. I still watch and love every episode!! As the cast members left and others took their place they were able to add to the show and keep it special. ALL were great in their roles and this is certainly a show that will go down in entertainment history and one of the best!!
Like (3) Reply Delete

peterkh1361 9 months ago
I was stationed in Iceland when this originally aired. It took till it was released on DVD to finally be able to see it.
Like (3) Reply Delete

nd1irish peterkh1361 9 months ago
Thank you for your service. Happy Veterans Day 🇺🇸 !
Like (3) Reply Delete

Michael 9 months ago
There weren't many pause buttons in 1983.

The first VCR I saw when a friend bought one in Nov 1980. Big and expensive. Sure, by 1983 more people had them, but still not every household.

So people had to watch the finale live, and wait for commercials or tye end to do other things.
Like (1) Reply Delete

kkvegas Michael 9 months ago
We got our first VCR in the late 1970's; it had wood paneling on the sides. I begged for it so I could record All My Children while I was at school, but my dad (who loved new technology) wasn't too hard to convince.
Like (1) Reply Delete

LarryLeeMoniz 9 months ago
"A M*A*S*H Smithsonian exhibit opened five months after the finale"
The signpost donated to the Smithsonian after production ended was not one actually used for filming.
One burned in the Ranch Location Set fire, and the other was taken home by set decorator Bert Allen. The Museum was delivered a "hastily" put together, somewhat inaccurate signpost for the M*A*S*H exhibit. This version seems to be the one replicated the most due to it's being the most photographed. The original signpost used for production (from the estate of Bert Allen) came up for bid in a Hollywood Auction in 2005, and despite it rather worn condition, fetched $25,000.
Like Reply Delete

F5Twitster LarryLeeMoniz 9 months ago
There were TWO identical signposts: one at the Fox Ranch set, and another in the camp set built on a Fox sound stage (I was on that set in 1978 and have photos of the sign). The latter is the one that survived and was auctioned.
Like Reply Delete

leebillyold 17 months ago
Thank You, love the story line

x60hz11 21 months ago
The Trapper, Frank & Henry shows were the funniest.
Like (2) Reply Delete

ToddLeBaron x60hz11 14 months ago
They were funny, but as the show moved along, it became more reality-based and we really got to know the characters a lot better. They were not one-dimensional characters, if you consider some of the things they put Margaret and Charles through, not to mention Radar and how well we got to know Col. Potter. They weren't carbon copies of the people who had left the show, and I applaud them for that.

MikeBugal 29 months ago
The time capsule was dug up from its original location and had to be reburied twice... both times due to construction projects.
Like (3) Reply Delete

rraypo 42 months ago
Arguably, the greatest show ever on TV.
Like (2) Reply Delete

dwango77 RaymondKristjanPoteet 33 months ago
Very arguably. It jumped the shark so many times they had to get a bigger boat.
Like (2) Reply Delete

ToddLeBaron dwango77 14 months ago
And how would YOU have improved that show? Inquiring minds want to know. If by "jumped the shark", you mean cast changes, things like that happen in wartime. People come and go and others come in. I felt the show was a lot more thought-provoking and meaningful after the first three seasons. Yes, it was a shock when Henry Blake was killed off, but there are realities of war, and M*A*S*H wasn't a show that intended to whitewash any of that. This wasn't McHale's Navy or Gome Pyle we're talking about. It was a well-written, well-acted show that was obviously a success or it wouldn't have lasted as long as it did.
Like (2) Reply Delete

LarryLeeMoniz dwango77 9 months ago
I think it did pretty well considering it had an 11 season run. Almost every show runs out of ideas eventually. Most shows jump the shark a few times. I think there was a definite shift in tone after season 6. The shows were a bit more "preachy" and a humor grew a little stale. They also stopped using background music after season 6, which for me, made the episode seem a bit cheaper looking. Overall, I still enjoy the show very much. Also, "That's some bad hat of a comment Harry!"
Like (1) Reply Delete