Where To Watch Shop Store Contact
Home / Stories / Andy Griffith took great pains to disprove a rumor he was paralyzed in the Eighties
Did you know?

To silence the lie, he grinned and bore it, wearing leg braces and jogging onscreen while performing a highly visible guest role. 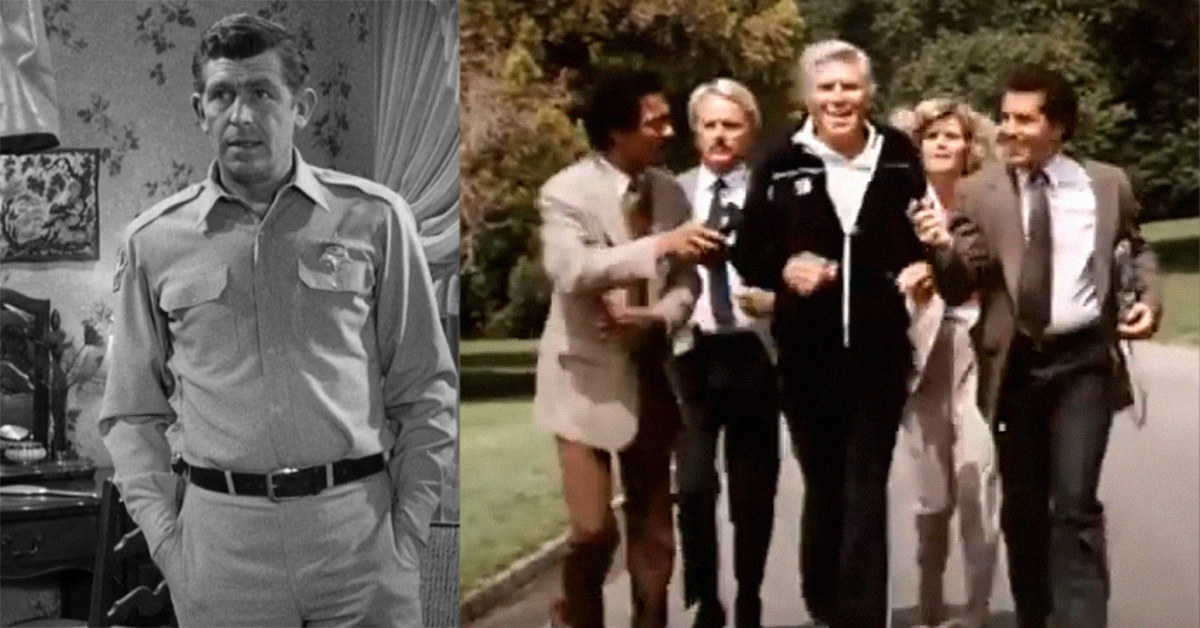 A beloved episode of The Andy Griffith Show is called "The Rumor."

In it, Barney sees Andy kissing Helen and leaps to the conclusion that he has just witnessed their engagement kiss.

Hilarity ensues when Barney spreads this false rumor and nobody in Mayberry thinks to verify the story before planning a massive surprise party that requires a complete romantic remodel of the sheriff’s rarely viewed bedroom to prepare it for his bride to be.

In Griffith’s real life during the show’s run, the biggest rumors he had to contend with were whether or not his very popular show might be ending. Season after season beyond Don Knotts’ departure, fans and critics speculated whether this might be Mayberry’s last days.

But then in the Eighties, a wild rumor unlike any other started spreading about Andy Griffith, and no matter how hard he tried, he couldn’t seem to quash it. 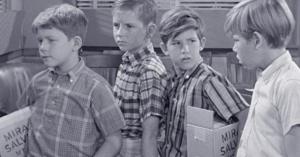 People really did buy into Opie's "miracle salve" in the Fifties

The rumor followed a time when Andy had a terribly bad bout with the flu.

It was 1984 and, according to the book Andy and Don: The Making of a Friendship and a Classic American TV Show, that year Griffith’s illness got worse over the next few days as he started feeling what he said was a "terrible, searing pain that ricocheted through my entire body."

For weeks and then months, there didn’t seem to be an end in sight to all the searing pain.

Then one day Andy was watching the Kentucky Derby when he lost control of his feet. He tried to stand up and he dropped right to the floor, unable to hold up his own weight.

He was rushed to the hospital and diagnosed with an inflammatory nerve condition, but rumors had already begun swirling in Hollywood and beyond that the actor was paralyzed for life and would never walk again.

Though Griffith was never paralyzed, his recovery almost took him a full year, so nobody saw any evidence to contradict the rumor.

By the time he felt better, not only had all his job offers dried up with no one knowing if he’d ever return to the screen, but also, he couldn’t seem to convince the world that he wasn’t now nor ever was paralyzed.

He almost lost all hope, but his wife Cindi wouldn’t have it. She gave him the pep talk he needed to find a creative solution to his problem.

Side by side, they found the perfect way to show everyone how wrong they were about his condition.

"That day, and every day for quite a while, Cindi and I went over to the William Morris Agency at lunchtime and sat in the lobby," Griffith said. "My agent and every agent in the building saw us. Everybody talked to us, invited us to their offices, some to lunch."

At the time, a popular primetime soap opera called Hotel aired right after Dynasty. This would be the show that provided Andy the opportunity to prove he could walk onto any TV show he liked.

Produced by Aaron Spelling and starring James Brolin, Hotel was kind of like The Love Boat in that much of each episode’s focus was on the guest stars of the episode who were staying temporarily in the hotel.

In an episode called "Illusions," Griffith played Brolin’s character’s idol in his guest spot, and he’s come to the hotel for a banquet in his honor naming him "Man of the Year."

About 18 minutes into the episode, Griffith agreed to do a scene where his character is jogging while a camera crew and interviewers ask him questions.

It’s not a short scene, with Griffith appearing in the distance and winding up a road, a smile on his face as he jogged seemingly effortlessly.

The actor was hiding excruciating pain, wearing leg braces to get through the scene, and bravely grinning and bearing it.

All the pain was worth it when the rumor that he was paralyzed promptly ended there, with one of TV’s biggest stars acting bravely to run the rumor out of existence. 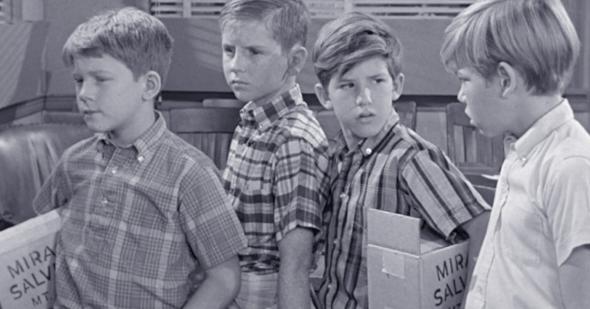 People really did buy into Opie's "miracle salve" in the Fifties 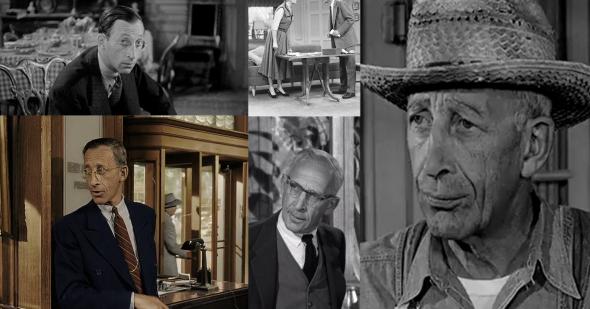 Did you know?
Charles Lane was happy playing classic TV's biggest ''stinker'' of all time 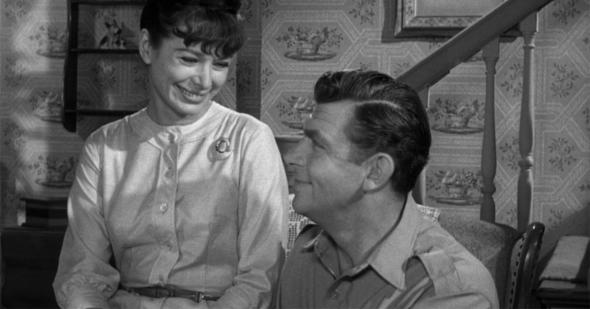 Mayberry
Did you know Andy Griffith cut out some love scenes between Andy and Helen?
Are you sure you want to delete this comment?
Close

myfairlady 4 months ago
He had Guillain Barre Syndrome!!!
Like Reply Delete

GOOSEYGOOSE9 9 months ago
I Like Andy Griffith As Matlock Better Than As Sheriff Andy Taylor.
Like Reply Delete

MikeyMello 11 months ago
Weird story, I had never heard this one before. I think I remember a show called Hotel, I’ll definitely be searching for it now.
Like Reply Delete

Michael 11 months ago
It can take a long time rebuilding muscle.

Starting in February 2019, I slowlygot worse, really tired and cold, but after some point, sore muscles. I landed in the hospital at the start of April, I was immobile and unaware.

A rare autoimmune disease, I was in the hospital for three months, they woukdn't let me leave until I could reasonably walk. They basically sent me to rehab after three months. Sothree months in rehab.

Two years later, my muscles aren't back to normal, thiugh the pandemic has got in the way.

Harold Ramis, of Stripes and Ghostbusters, hedied of an unspecified but related autoimmunedisease. Actually, it hit earlier, and it took a year for him for his muscles to recover.
Like Reply Delete

Mac2Nite 11 months ago
Seems like a simple walking onstage for a guest appearance on the Tonight Show w/Johnny Carson would have put any speculation to rest. 😏
Like (6) Reply Delete

kidhickey 11 months ago
Yea He Went back and lived in is Home Town Mount Airy North Carolina , for last remaining years , and for a while he didn't go out in the Public , but for some strange reason for about the last 2 years of his life , he was seen in that town's local news paper , and appearing at public events , I was glad he did that for the folks of Mount Airy , he was greatly Loved by those Folks .Now about being paralyzed , this is something that i never heard of this story mmm.
Like (1) Reply Delete

FLETCH 11 months ago
This article is not very well researched and more sensationalized than anything else.

I've read 'Andy and Don: The Making of a Friendship and a Classic American TV Show' and still have the book.

It clearly says that Andy was in fact temporarily paralyzed as a result of Guillain-Barre syndrome. He was in fact bed ridden and unable to walk.

He eventually did recover and was able to walk again (obviously) but his recovery took a long time, years in fact. This is why he was forced to wear leg braces and the reason he was in so much pain (as the article says)

He had to wear leg braces for years, including when he started the series Matlock. They tried their best to cover up the braces so they were not noticeable.

At some point ( I believe during season 2 or 3 of Matlock) he decided to no longer wear leg braces, even though it caused him pain to do so.

So I'm not sure what the motive of this article is. It's very misleading and inaccurate.

MikefromJersey FLETCH 11 months ago
Excellent post Fletch. I would add that I recall reading a Readers Digest on Andys bout
with illness. It mentioned he had to stay in a darkened room because any kind of light
caused extreme pain. I don't know if that has anything to do with the syndrome you
mentioned or was from something else. The article also said that as a result of illness
and surgery that Andy wound up 4 or 5 inches shorter. I have no idea what would cause
that, the article must have been almost 40 years ago.
Andy was listed at 6 foot in his prime and if you look at him on Matlock, he is the same
size or shorter than many women in the scenes with him. Did the book you mention
say anything about his height?
Like (1) Reply Delete

CoreyC FLETCH 11 months ago
Guillain-Barre is caused by flu vaccines.
Like Reply Delete

FLETCH MikefromJersey 10 months ago
I'm almost certain the book never mentions anything about Andy losing height, I would have remembered that. And 4 to 5 inches shorter seems almost impossible so I doubt that's true.
Like Reply Delete

Jaxter14 11 months ago
I never heard that story.
Like (2) Reply Delete

Pacificsun 11 months ago
Most would sue, and yet he proved them wrong, the hard way.
Like (1) Reply Delete

ETristanBooth 11 months ago
Andy had Guillain-Barre syndrome, but here they just call it a nerve condition.
Like (3) Reply Delete

nd1irish ETristanBooth 11 months ago
I had that too 16 years ago. Put me in a wheelchair for a while. I also tried to get on Hotel to show everyone I was Ok but, alas, the show had been cancelled 😂
Like (4) Reply Delete

Andybandit 11 months ago
Wow that is scary.
Like (1) Reply Delete

MrsPhilHarris 11 months ago
I forgot about Hotel. 🤔 I don’t think I ever watched an episode.
Like (2) Reply Delete
Load previous comments

MrsPhilHarris denny 11 months ago
Well I’m going to have to watch both of those episodes. Thanks. James a rollin looks so young. I wonder what the supporting cast is up to?
Like (1) Reply Delete

JHP CoreyC 11 months ago
thank you:)

I really am embarrassed not to know that

WordsmithWorks 11 months ago
"Fake News" has been a scourge for as long as there have been the printed word and gullible people. Imagine if there had been the internet and a 24-hour news cycle. Poor Andy would have been reported dead and buried.
Like (1) Reply Delete

WordsmithWorks JHP 11 months ago
Either it's true or it's not.
Like (2) Reply Delete

LoveMETV22 11 months ago
Good story and kudos to Andy Griffith for his sticking to his cause.
Like Reply Delete