Go behind the scenes of this home-spun recording session. 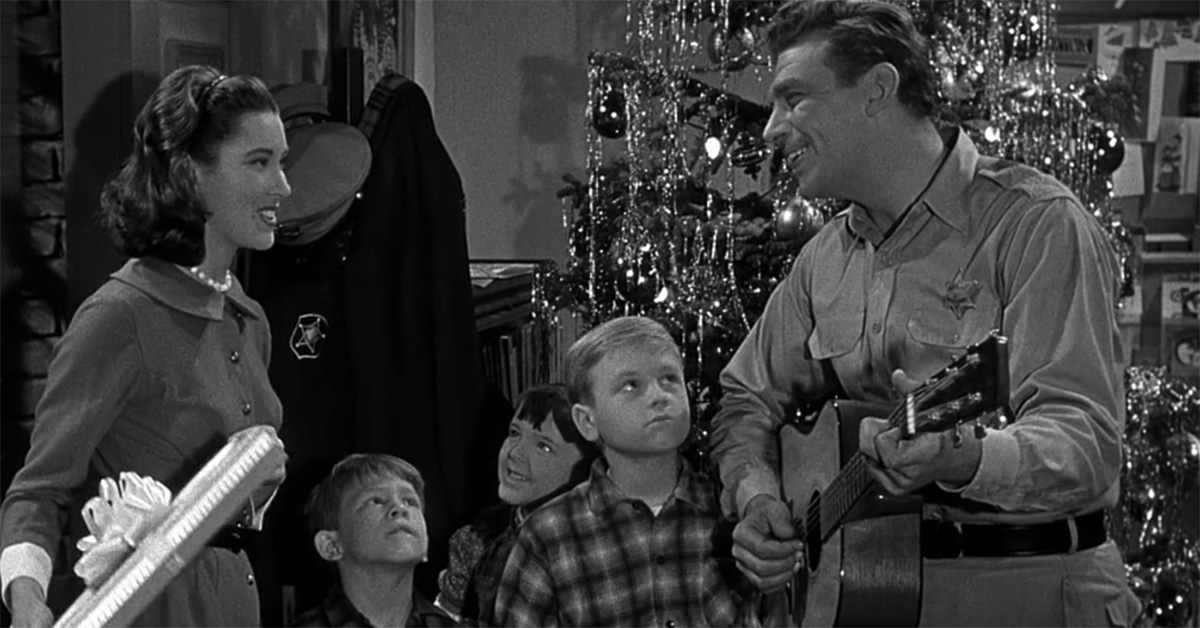 One of the most Mayberry images of all time is simply Andy Griffith strumming a guitar. Whether it's on the patio with Aunt Bee and Opie or in the jail cell picking with The Andy Griffith Show's distinct brand of scalawags, that guitar was always a welcome sight for fans of the show.

But for Elinor Donahue, the actor who played Andy's first love on the show, Ellie Walker, that guitar suddenly became a somewhat intimidating instrument to encounter.

The nerve-wracking scene happened in the first season episode "The Christmas Story," where Andy brings out the guitar with the kids gathered around a tree, and Ellie is expected to join him in singing a lovely rendition of "Away in a Manger." Watch the video above to hear the song on the show.

In an interview with the Archive of American Television, Donahue explained that it was the singing itself that had set her nerves so on edge. She said, "It was scary. I knew I had to do it, but I kind of didn’t want to have to do it."

Her mother tried to soothe her, reminding her, "I don’t know why you’re so afraid of it. You’ve sung that song a million times at Christmas and at church. You certainly know it."

The soothing words of her mother just didn't help, though, as Donahue went on, saying, "But I was terrified, I had this thing about not being able to sing."

Donahue remembered showing up to the recording studio and how it felt to see the microphones everywhere and: "Andy Griffith was there, of course, with his guitar." She couldn't stop her voice from quivering as she sang the Christmas classic.

Good thing for Donahue, her costar Andy Griffith happened to be a former music teacher. Donahue said Andy took her aside and coached her a little, suggesting they try to figure out the best key for both of them to sing in. She obliged, hoping to get a good recording out of the session and willing to follow his capable lead.

Then, Griffith's next suggestion was perhaps the most Mayberry way of helping his costar calm down. Donahue said, "He kind of noodled around and he found a key, and we started to rehearse, and my voice was shaking. He said, ‘You know, why don’t we just sit down here on the floor?’"

Her story goes on to paint the scene of the two of them, Andy and Ellie, sitting on the edge of a riser, just inches off the floor, practicing their harmonies. To get going, Donahue said Griffith started strumming some chords, and he suggested she simply hum the tune of the song. Then, he said, "When you feel really comfortable, just come in and we’ll start, and I’ll just pick it up."

Finally calmed by her costar's coaching, Donahue said that after a little while, this trick worked. When she was good and ready, she stopped humming and started singing the words. And as the memorable moment on the show proves, it worked and her nerves were cured! 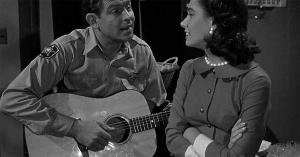 Did you know?MusicAs Seen on TVAndy Griffith
Andy Griffith's acoustic guitar was unique in more than one way

Except a funny thing happened after they finished this first successful run-through.

Donahue said Andy stopped playing and said, "Okay, I’ll see you tomorrow morning." Laughing, she remembered answering, "Well, aren’t we going to record it?" In the interview so many years later, Donahue recalled her question with a wink at the camera before relating Andy's response: "He said, 'We did.'"

So next time you watch "The Christmas Story," pay attention and you'll hear the song starts with Ellie humming, just like Andy had her do in the rehearsal. And whether you're catching it around the winter holiday or celebrating Christmas in July, or any day in between, just remember: The sweet duet you hear between Andy and Ellie came from this home-spun recording session, laid down in Andy's laidback manner and recorded, unbeknownst to Ellie, in just one take.

Fuming 37 months ago
The Christmas episode is one of my favorites because of old Ben Weaver and how badly he wants to be part of the Christmas celebration at the jail.
Like (1) Reply Delete

Barnbaby 42 months ago
Great story. Thanks for this.

Sooner 42 months ago
She had a very sweet voice, and didn't need to feel embarrassed at all.
Like (1) Reply Delete

sholsten 43 months ago
How does it feel or you to be a Sorry Useless DickHeaded Spammer?
Like (2) Reply Delete

sholsten 43 months ago
How does it feel or you to be a Sorry Useless DickHeaded Spammer?
Like (1) Reply Delete

43 months ago
So tired of scammers.
Like Reply Delete

ELEANOR 43 months ago
A very sweet story, BUT yet another Christmas story that is way too early. I AM NOT HAPPY!
Like (2) Reply Delete

Wiseguy ELEANOR 42 months ago
You must get really upset when department stores bring out the Christmas stuff at the end of August.
Like (2) Reply Delete