Where To Watch Shop Store Contact
Home / Stories / Ever notice two of Andy's girlfriends lived in the same Mayberry house?
Did you know?MayberryAndy Griffith

Ever notice two of Andy's girlfriends lived in the same Mayberry house?

It's also the location where Andy first falls for Ellie! 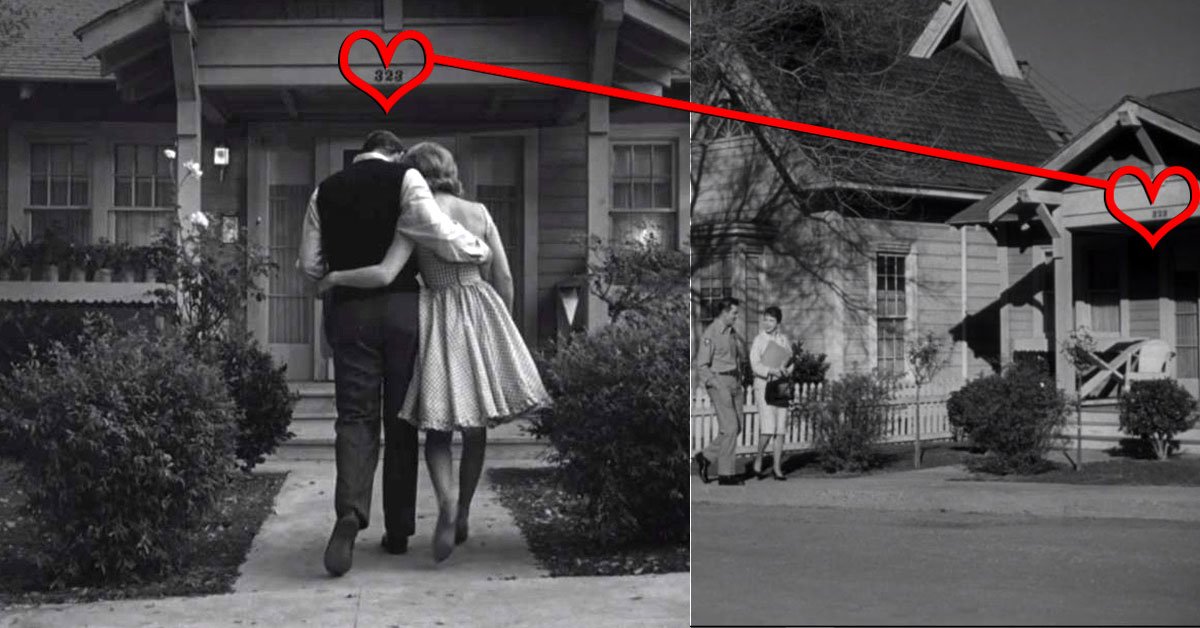 The love of Andy Taylor's life turned out to be Helen Crump, the school teacher he eventually wed. Most fans recall that their courtship began with a rocky start in the third season episode "Andy Discovers America," after Andy accidentally gets Opie and his friends to rebel against Helen in class.

Once everything smooths over in the end, the Mayberry sheriff walks the school teacher home, and there in front of her house marks the beginning of a cherished TV love story. 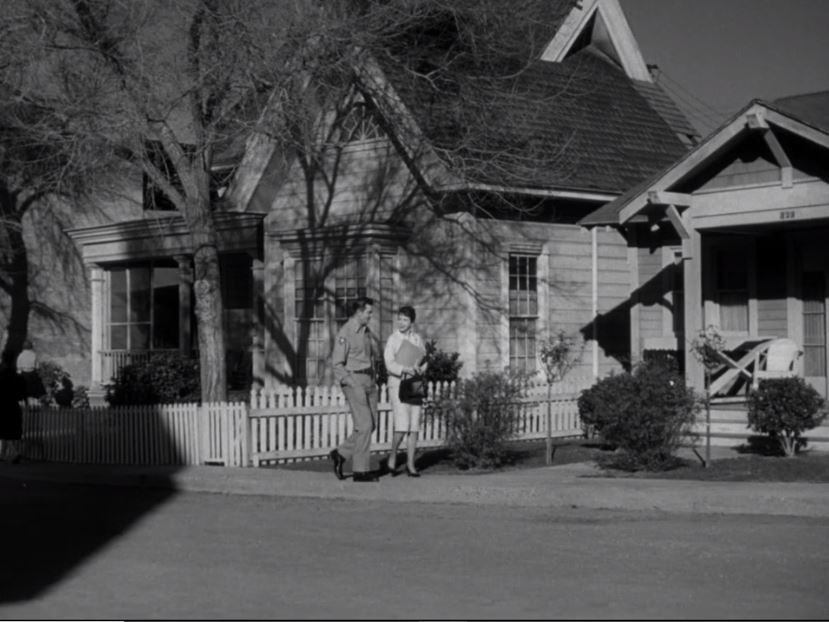 But have you ever really looked beyond the sentiment of the scene to note the house where Helen lives? Because it's a house in which Andy has found love once or twice before!

It turns out that not only was Mayberry a fictitious small town, but the lot where The Andy Griffith Show was filmed also had a limited number of houses for Mayberry residents to occupy. That meant some Mayberry residents had to share, and the hope was that the magic of television would help distract audiences from detecting all these familiar house exteriors.

But after watching again and again, it makes it easier to spot the similarities, and it just so happens that not only did Helen Crump live in the little house with the white picket fence marked "323," but so did Andy's girlfriend from earlier in the same season, Peggy McMillan (played by Joanna Moore).

Peggy was a nurse who Andy started to date in the third season episode "Andy's Rich Girlfriend." The episode kicked off with a hilarious double date between Andy and Peggy and Barney and Thelma Lou.

After a fun time at the lake, Andy walked Peggy up to her house, their arms around each other, and the steps they trotted up at the end of their date are the exact same ones on which Andy and Helen stand when their love first sparked. What a coincidence! 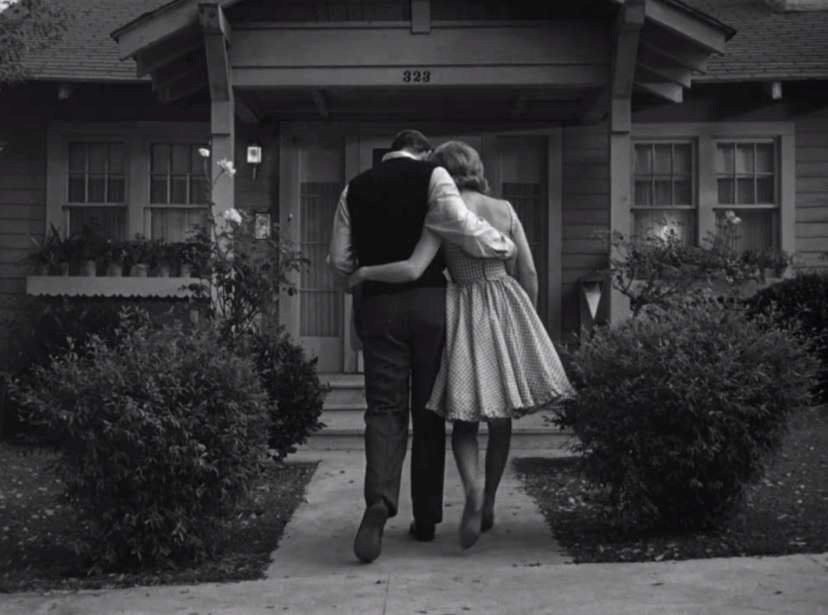 At the very beginning of The Andy Griffith Show, Andy's love interest is Ellie Walker, a young pharmacist sweetheart. Although Ellie did not live in the same house as Helen and Peggy, it's a location where she and Andy spark their relationship. 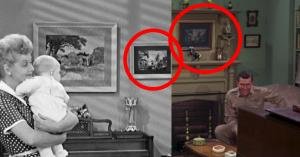 nostalgia
This painting from I Love Lucy decorated walls on The Andy Griffith Show, too

In "Ellie Comes to Town," Emma Brand comes into Walker's Pharmacy on Ellie's first day. Ellie won't give her the medication she requests because Emma has no prescription. Andy protests Ellie's strictness, and as Emma feigns sickness denied her pills, the sheriff sets the town against Ellie, pressuring her to finally go to Emma's house to deliver the pills and bring her some soup, too.

When Ellie arrives at Emma's house, Andy's already there and he witnesses the pharmacist seeming to cave to the town's demands. Leaving the care package for Emma, Ellie exits, and Andy chases after her.

Pay attention when they meet on the lawn, and you'll notice Emma Brand lives in the same house where Peg and Helen eventually live. 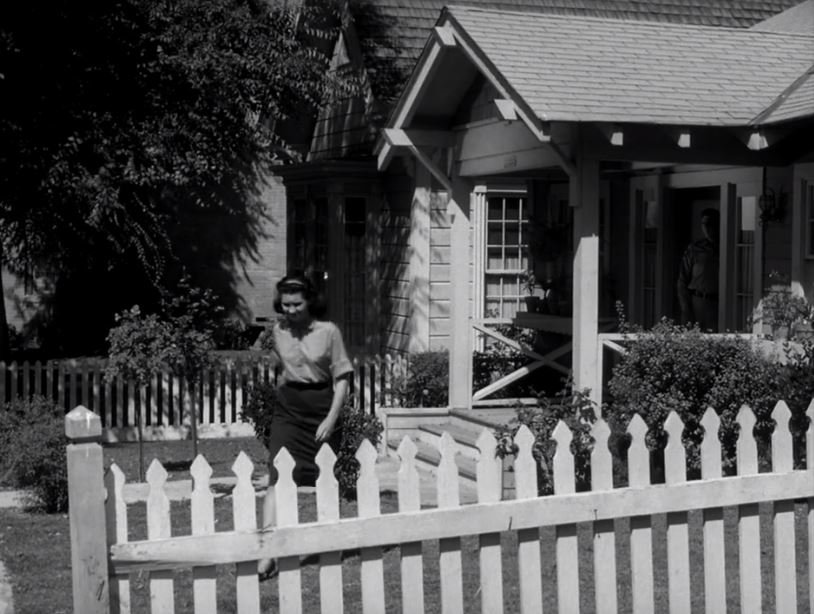 On Emma's front lawn, Andy asks Ellie what made her deliver the medicine, and she shatters his expectations by explaining that Emma's pills are just placebos and that her sickness is in her mind.

When Andy asks why Ellie didn't just give Emma the "sugar pills" in the first place then, she explains her dedication to following the rules, something that visibly impresses Andy, who expected to get Ellie to come around to his way of thinking, only to suddenly be vibing more with how she set her own mind.

The budding romance is only hinted at, as the scene ends in comedy, with Ellie talking Andy out of ticketing a car parked blocking a fire hydrant — only to then get into that same car and drive away.

But for any fan of this early Andy Taylor romance, this is where you could say it all began, in front of the very same house where Andy would find love again in the third season and eventually meet the woman he married.

TomBurkhart 25 months ago
wasn`t the haunted house ,the Munsters place?
Like Reply Delete

Carolynfmr 28 months ago
I always like Peggy. I thought she and Andy made a good couple.
Like (1) Reply Delete

JanMMitchell 29 months ago
I think Andy should have married Elly Walker.
Like (2) Reply Delete

Rick 29 months ago
Emma ran a boarding house, duh. Maybe she and Mrs. Mendelbright were related.
Like Reply Delete 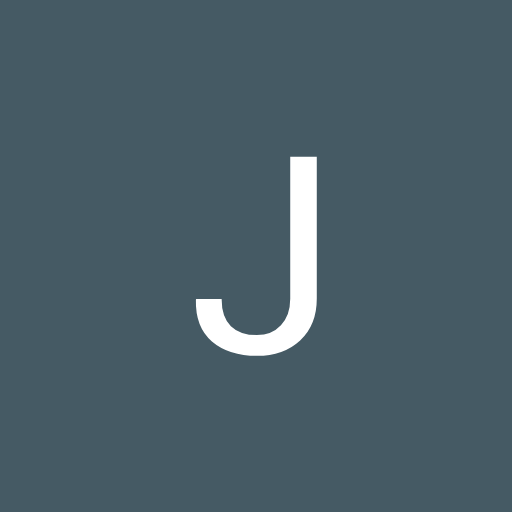 Jay 29 months ago
Another one of Andy's girlfriend lived in this house as well. Mary in episode Threes a crowd. Some others lived there such as Mrs Elenora Poultice, Ethel the little girl with a stye, Charlie Varney, who bought Otis car. And Nellie. The house next door was Mrs Mendlebrights boarding house in which Barney lived. Ellie lived in it in episode Irresistible Andy. And Floyd lived in it in episode Divorce mountain style.
Like (4) Reply Delete

TomBurkhart Jay 25 months ago
not remember Mary.
Like Reply Delete

Frpaulhall 29 months ago
It was a small set. So they used the same house twice. They probably didn't think the people would catch on. Haha
Like Reply Delete

denny Frpaulhall 29 months ago
I believe it was filmed right outside the studio lot. Not 100% sure, but I know Thelma Lou's house was like 3 doors down from studio entrance. There is a youtube video about it.
Like Reply Delete

AnnaRentzVandenhazel 29 months ago
There's a simple explanation that could happen even in real life. These ladies weren't on the show at the same time, so obviously when one moved away, another moved into the house she vacated. :)
Like (2) Reply Delete