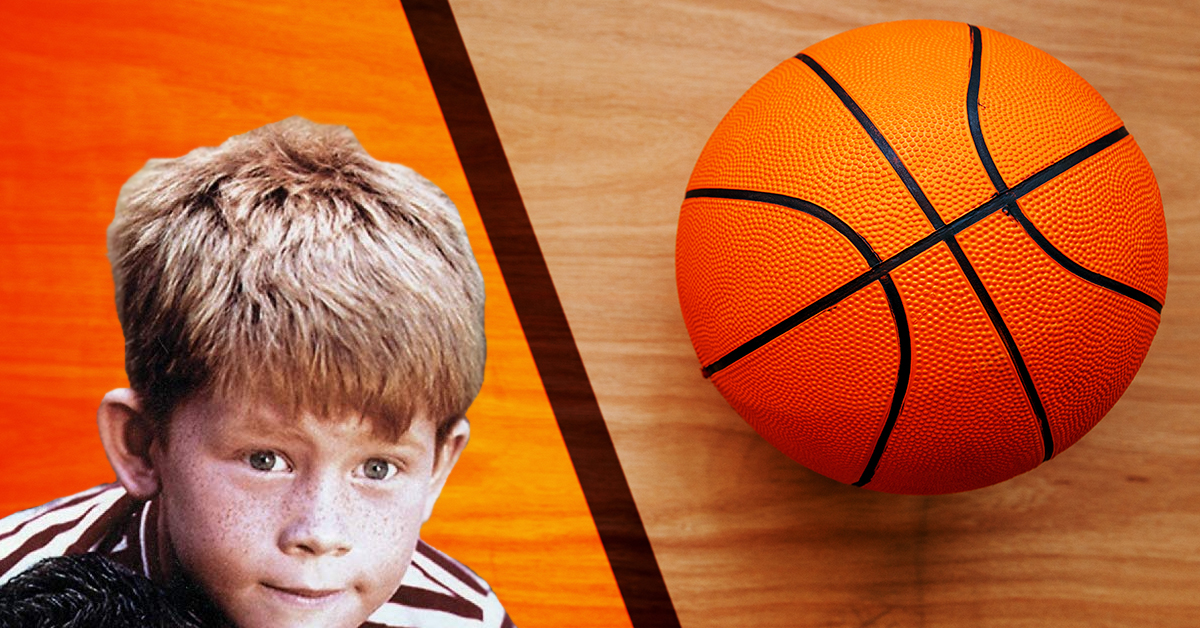 You have to watch closely to know it, but shooting hoops was a favorite pastime for many in Mayberry. Even Aunt Bee got in on the games.

In “Only a Rose,” we find out that it was her time on the high school basketball team that started the friendly competitive spirit between Aunt Bee and her BFF Clara Edwards. At the end of the episode, Clara and Aunt Bee reminisce, and Clara tells Aunt Bee, "You were the backbone of our basketball team." Aunt Bee responds, "But you were our best dribbler." The memory is so fond, they immediately launch into singing their old alma mater.

Yes, basketball sits on the sidelines of the show. When Andy and Goober need someone to fill in on their bowling team for "Howard the Bowler," before they land on Howard Sprague, we learn that Mayberry citizen Ab Winters gets ruled out because he’s got regular basketball games on Tuesdays and Thursdays, further proving the sport’s popularity in the small TV town. (It is Tarheel country, after all.) So even though the show spent a little more time on a baseball diamond than a basketball court, you can rest assured that some of our favorite Mayberry citizens could dribble circles around others.

Despite these mentions of basketball in various episodes, though, the sport doesn’t become the focus of any particular episode. But, behind the scenes of The Andy Griffith Show, the game was so beloved that a backboard was installed for a very special reason.

According to Mayberry R.F.D. star Ken Berry, The Andy Griffith Show’s young star Ron Howard liked to shoot around between scenes with anybody he could get to play, so they had a backboard put in just for the child actor. Berry told the Archive of American Television:

"Ron, of course, didn’t stay on with the cast of Mayberry R.F.D., but I got a chance to meet him and work with him [on The Andy Griffith Show]. And I remember they had a backboard on set, onstage, and that was put in there just for Ronny. And we shot baskets. We played H.O.R.S.E."

It’s certainly a charming picture that Berry paints of friendly basketball games on set, with pint-sized Ron Howard going up against contenders like Berry — and likely putting up the most points over time, assuming they gave the kid the advantage. You have to imagine his TV dad Andy Griffith also got in on the action, considering how much fun Andy made the set of his show.

Next time you’re thinking about the vibes behind the scenes of The Andy Griffith Show, on top of the guitar and banjo playing, just know there were also fast breaks made to the hoop as they laid down each episode, while also doing lay-ups between scenes.

And although Berry’s time working with Howard was brief, the veteran actor seemed as struck by the good-natured child star as his costars. Berry said, "It was a good place to work. It was fun. And I remember going away, having worked with Ronny and thinking, 'What a great kid! Boy, his parents must’ve done something right.'"

Perhaps part of that was making sure their boy got enough exercise while filming episodes of his breakout show?

Html_bucket 31 months ago
As a child growing up on the set of Andy griffith, Ron was so smart learning his lines. Now he is a famous director. He did very well for himself as well as happy days. He's a good actor.
Like Reply Delete

daDoctah 40 months ago
Ron Howard's love of basketball continued into his next signature role, with Richie Cunningham's big brother Chuck seldom seen not either carrying or dribbling a b-ball. And the end of one episode in which Richie's performance on the basketball court triggers a spoof of Tom Bosley's Life Savers commercial.
Like Reply Delete

Sooner 40 months ago
I don't remember much in reference to basketball for this show, but do remember baseball a number of times, plus pics of them playing catch between takes.
Like Reply Delete

Sara 40 months ago
Ron(Ronny) Howard is the most talented child actor of all time, who sucessfully transitioned through teen years and adulthood to a first rate director. As a lifelong role model of kindness, decency, talent and success-- out of Hollywood-- no one else compares.
Like Reply Delete

stephaniestavropoulos Sara 40 months ago
He was also one of the very few child actors who didn't grow up find themselves on the covers of tabloids because they got in a fight, had lecherous affairs, took drugs, murdered someone, etc. He even raised his children in the "Mayberry Way." Good, clean, decent and wholesome. In this day and age, there sure is nothing wrong with that type of parenting!
Like Reply Delete

Lantern 40 months ago
Ron Howard's parents certainly did something right. Who'd have ever guessed that kid from Mayberry (and that lisping kid from River City Iowa) would wind up an Oscar winner?
Like Reply Delete

stephaniestavropoulos Lantern 40 months ago
For the uninitiated, River City, Iowa is not a reference to where RH is from, but a nod and a wink to his appearance in my favorite musical, Meredith Willson's "The Music Man."
Like Reply Delete

EricFuller stephaniestavropoulos 40 months ago
The song was The Wells Fargo Wagon (Somethin' Speshel).
Like Reply Delete