It was a little more than just a whistle and a walk for the young star.

May 24, 2019, 1:25PM By MeTV Staff
On Now
The Andy Griffith Show Opening Credits Comparison
Up Next:
Share

Every episode of The Andy Griffith Show starts the same: Viewers see Andy and Opie, father and son, strolling down a dirt path to their favorite fishing hole, a pole easily resting on each star's shoulder. Over it all, the show's iconic whistled theme song is heard, as Opie tosses one rock, then another to close out the short sequence.

Filmed only a few times, in black & white and color, most fans love the simple sequence, which captures the heart of the show's groundbreaking father-son relationship in just a few seconds. However, Ron Howard recently revealed in an interview with The New York Times that filming the title sequence put unexpected pressure on the young star.

When asked if Andy or Ron had ever actually caught a fish with those famous poles, Howard revealed a funny show secret: 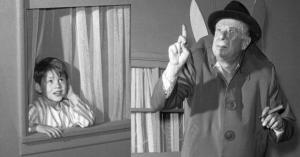 "No, unless you count all of the fishing scenes where the prop man had to wade in and put a catfish on the line. That was Franklin Canyon and we were only allowed to put two fish a day in, because it was actually the drinking water for Hollywood. And on the opening-credit scene shoot, I was only allowed to throw two rocks in the water for the same reason. Yeah, there was a lot of pressure on that rock toss. I had to get it right."

Watch the video at the top of this post to see Ron Howard "get it right" in the intro shown on the show's eight seasons.

So next time you're watching the show, keep in mind that when Howard picks up one rock, then the other, each time he had to nail the take. As if we weren't already impressed with the child star's awe-inspiring history in the industry!

Barnbaby 42 months ago
It seems strange to be chucking rocks into a pond you are going to fish, since your scaring them away by doing so.
Like Reply Delete

harlow1313 42 months ago
I recall several trout, but no catfish.
Like (1) Reply Delete

hagbow harlow1313 30 months ago
I agree with you. I saw a lot of trout, but never a catfish and I think I’ve seen ever episode. Love it anyway! ❤️
Like Reply Delete

MrsPhilHarris 42 months ago
I read that Ronnie Howard couldn't throw very well and someone off camera threw the rock that made the splash.
Like (1) Reply Delete

cperrynaples 42 months ago
I thought there were only 2 titles [B&W/color] but apparantly there were 8!
Like Reply Delete