The road to stardom ran through Dodge City.

Because of its long and legendary 20 season run into the 1970s, it’s easy to forget that Gunsmoke was one of the first mainstream Westerns on television. It began airing before Fifties counterparts like Have Gun – Will Travel, Maverick and Bat Masterson. In fact, it even provided many early acting opportunities for future Western stars.

Here are ten actors you know from starring roles in later Westerns who first appeared on Gunsmoke. 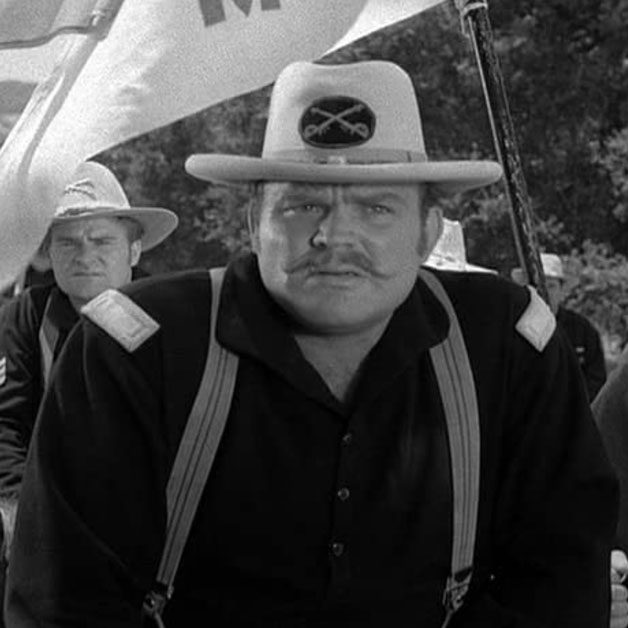 Bonanza star Dan Blocker appeared in two Gunsmoke episodes before playing Hoss Cartwright. In the last episode of season one, “Alarm at Pleasant Valley,” Blocker had a small role as a cavalry officer with a great mustache, seen here. Eleven months before Bonanza’s premiere, Blocker stopped by Dodge City again in the season four episode “Thoroughbreds.” 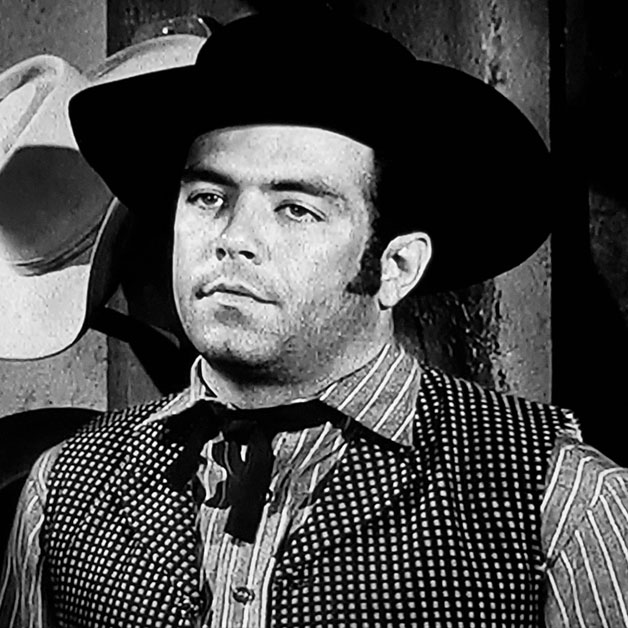 Speaking of Bonanza, Dan Blocker’s TV brother Pernell Roberts also appeared in Gunsmoke, both before and after his time on the Ponderosa. Before he was Adam Cartwright, Roberts was Nat Pilcher (seen here) in the Gunsmoke episode “How to Kill a Woman.” The murder mystery was written by prolific Western storyteller Sam Peckinpah. After leaving Bonanza, Roberts also appeared in the season 13 episode “Stranger in town” as a gunfighter for hire. 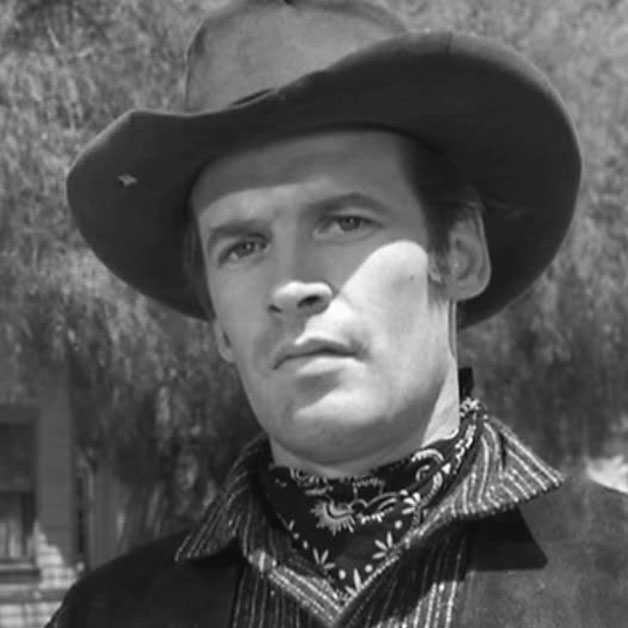 Two other Western brothers both appeared on Gunsmoke before starring in their own series: Peter Breck and Lee Majors from The Big Valley. Breck actually showed up twice in Dodge City, first as cattle drover Fly Hoyt in “The Patsy” (seen here) and then as the injured title character in “The Odyssey of Jubal Tanner.” 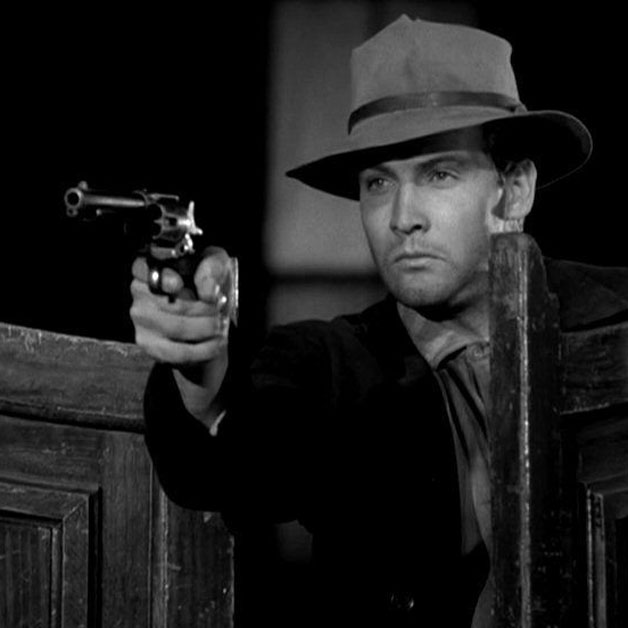 Gunsmoke gave Lee Majors his first credited screen role. His only other gig before appearing on the classic Western was a small, uncredited part in the Joan Crawford thriller Strait-Jacket. In the season 10 episode “Song for Dying,” Majors plays one son of a man bent on revenge. Roger Ewing played Majors’ onscreen brother right before becoming a regular in Dodge City as Thad Greenwood. Seven months after appearing in Gunsmoke, Majors would win the role of Heath in The Big Valley, only his fourth-ever onscreen acting gig. 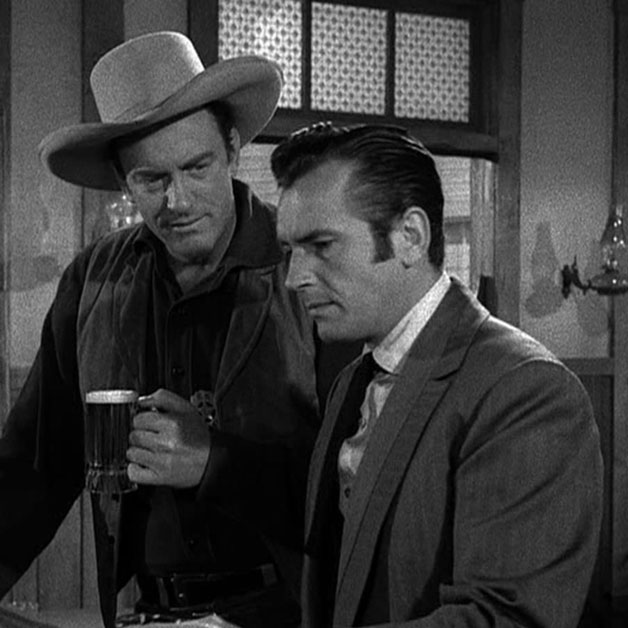 Just four months before joining Maverick, Jack Kelly guest starred in the Gunsmoke episode “Jealousy.” Kelly played an old friend of Matt Dillon’s who comes do Dodge to work as a card dealer at the Long Branch. The story’s title comes into play when gambler Lonnie Pike starts false rumors that Jack Kelly’s wife, played by Joan Tetzel, is seeing the Marshal on the side. 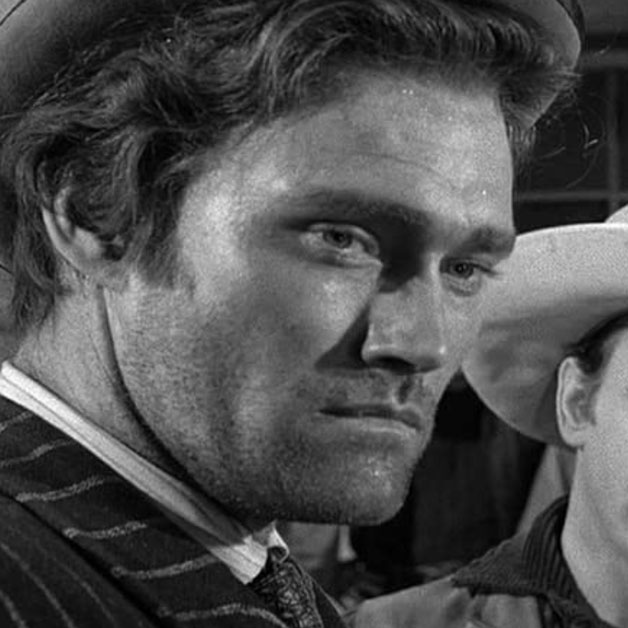 Though Chuck Connors is best known as the heroic Lucas McCain in The Rifleman, his imposing size and demeanor also won him many villain roles. A few years before starring in his own Western, Connors played a violent bully in the Gunsmoke episode “The Preacher.” Royal Dano plays the meek title character who is constantly tormented by Connors’ vicious prize fighter. Ironically, Dano guest starred in many Rifleman episodes like “Honest Abe” where Lucas is incredibly kind and protective of the character Dano plays. 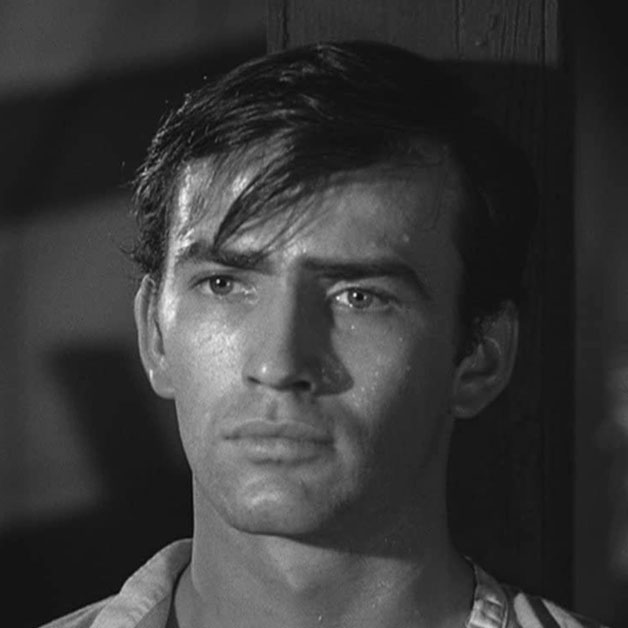 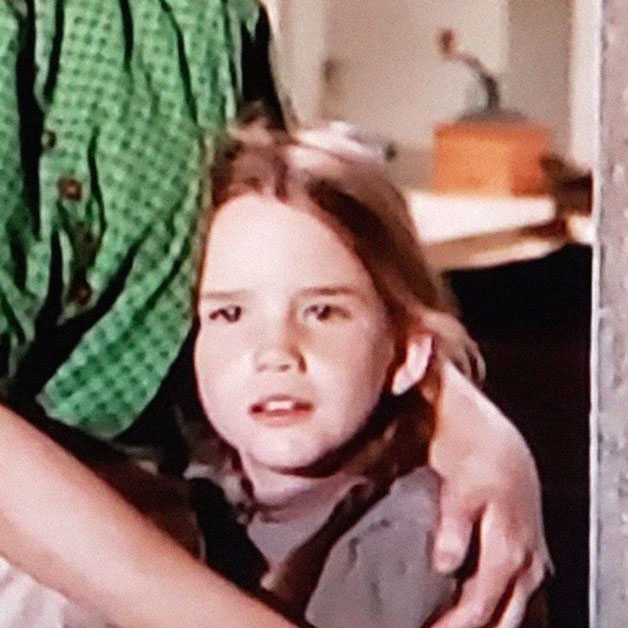 Two years before she began her memorable and long-running role as Laura Ingalls on Little House on the Prairie, Melissa Gilbert first ventured into TV’s Old West in the Gunsmoke episode “The Judgement.” She played the daughter of a violent drunk in her first credited role. Gilbert went on to guest star in Emergency! and the short-lived NBC Mystery Movie series Tenafly before starring alongside Michael Landon in Little House. 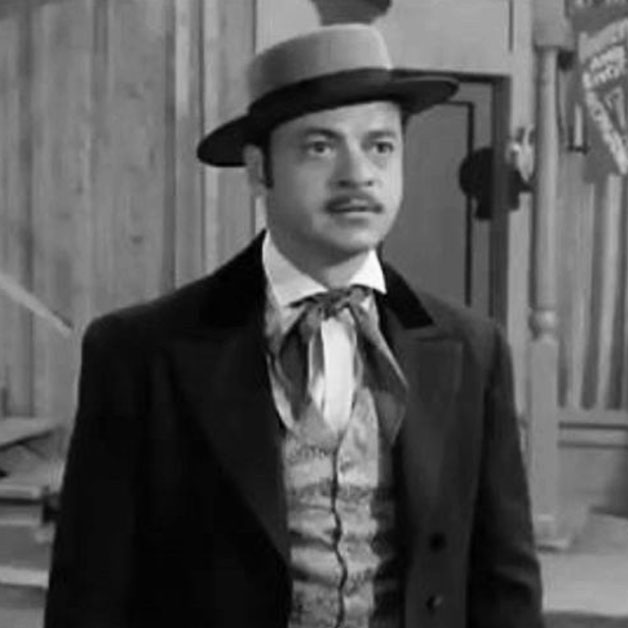 Ross Martin, who starred with Robert Conrad as Jim West’s fellow agent Artemus Gordon in The Wild Wild West, appeared in two 1958 Gunsmoke episodes. Toward the end of season three, Martin played a card dealer with a shadowy past in “Bottleman,” pictured here. His dandy outfit, complete with hat and vest, were a preview of his future days as a colorful secret agent. Martin made his second appearance in the season four episode “Land Deal.” 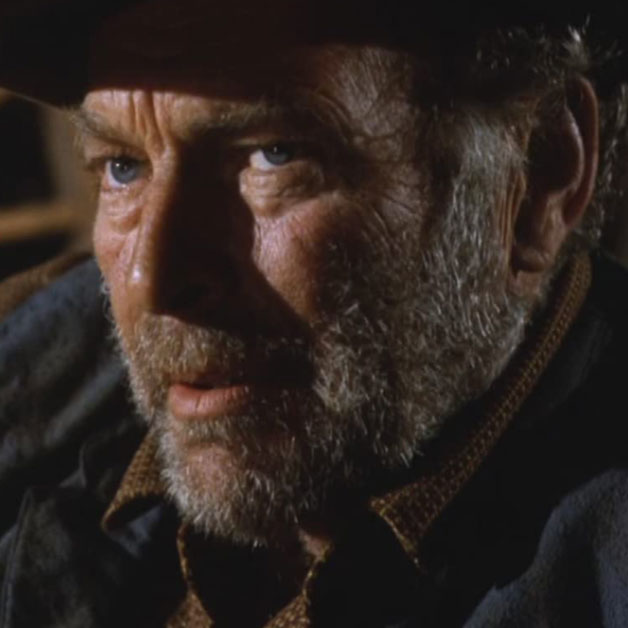 Leif Erickson, born William Wycliffe Anderson, was a prolific character actor in many movies and TV Westerns before starring as ranch owner Big John Cannon in The High Chaparral. One such guest spot, just months before becoming Mr. Cannon, was in the season 12 Gunsmoke episode “Saturday Night.” Erickson plays a cattle drover who saves Matt and helps him escort a prisoner to Dodge. 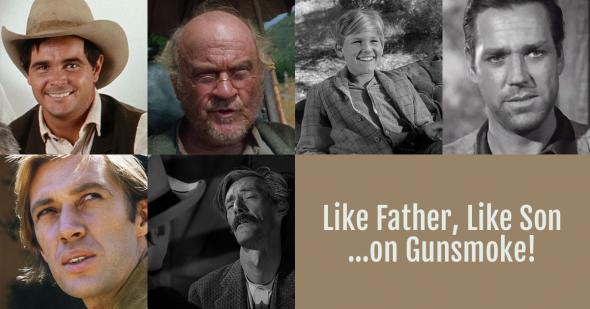 Westerns
7 father-son duos who both appeared on Gunsmoke 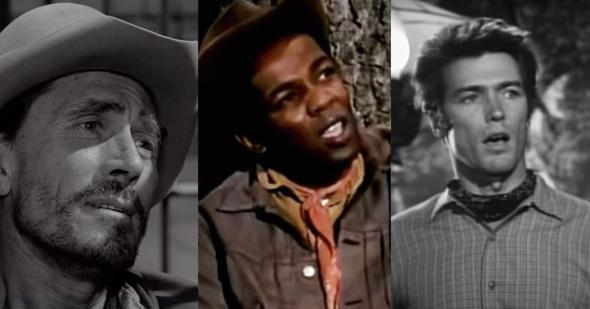 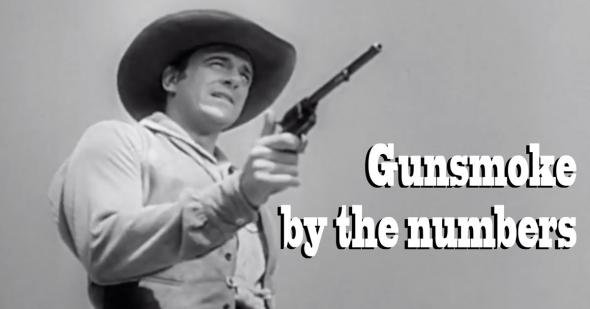 Westerns
How well do you know Gunsmoke by the numbers?
Are you sure you want to delete this comment?
Close

darncat1975 13 months ago
Glad James Drury and Leif Erickson went on to their shows because they were great shows. The Virginian and High Chaparral.
Like Reply Delete

gdanecarter 13 months ago
One might add fellows like Charles Bronson (1956) and Kurt Russell (1971) who made EARLY career guest appearances on GUNSMOKE. These two made their marks on the BIG screen. Russell did play Wyatt Earp in the film TOMBSTONE later on. Bronson helped destroy a German leadership stronghold in THE DIRTY DOZEN.
Like Reply Delete

AGSfan 13 months ago
Why did Peter Breck wear gloves all the time on "The Big Valley"? Lee Majors says Breck was against wearing hand make up. True?
Like Reply Delete

MichaelPowers 13 months ago
Oddly enough, the episode with Peter Breck titled "The Odyssey of Jubal Tanner" from May 18, 1963 would be the exact same title for an episode of The Big Valley from October 13, 1965. Yes, the same writer scripted both shows.
Like (2) Reply Delete

WordsmithWorks 13 months ago
Considering its popularity and longevity, I'm sure "Gunsmoke" attracted many actors who went on to star in their own shows. I'd like to see a list of, say, sitcom stars or movie stars.
Like Reply Delete

bigwally WordsmithWorks 13 months ago
IMDB has all the actors that were in all the TV shows and movies.
Like Reply Delete

WordsmithWorks bigwally 13 months ago
But not with the mini-bios and plot synopses all neatly written next to a pic of actor playing the role.
Like Reply Delete

Zip 13 months ago
Is it just me, or does Dan Blocker look weird without his ten-gallon hat from Bonanza?
Like (1) Reply Delete

KJExpress Zip 13 months ago
That and he also looks weird with that fake 'stache.
Like Reply Delete

WayneBattles Zip 10 months ago
I remember that he was a good bit shorter than the 6'6" Chuck Conners. Probably closer to 6'2" than the 6'4" they say on Bonanza.
Like Reply Delete

Runeshaper 13 months ago
It's AWESOME how all of these fantastic actors were once on Gunsmoke (-:
Like Reply Delete

CaptainDunsel 13 months ago
I would not have pegged #4 as Lee Majors. With that hat, those eyes and that chin, it looks to me like a blend between Jimmy Stewart and Roy Thinnes.
Like Reply Delete

MrsPhilHarris CaptainDunsel 13 months ago
I couldn’t figure out who it was.