It paid to have the name "Gibb." 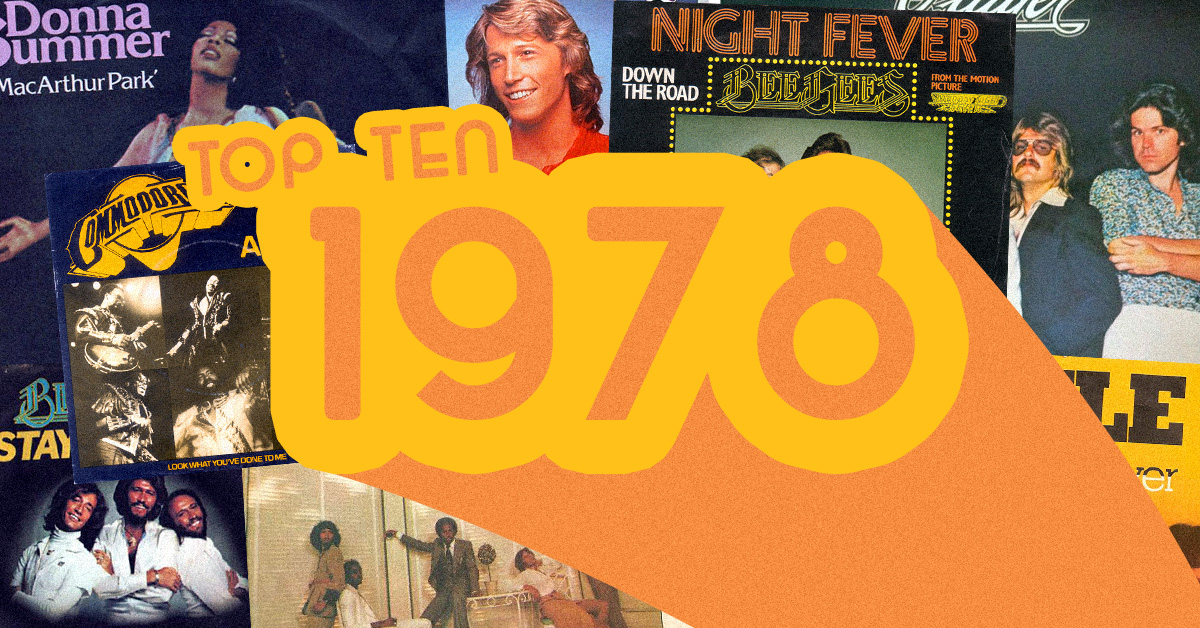 Two movies and their soundtracks towered overed all of pop culture in 1978. Sorry, Star Wars, 1977 may have been your year, but these twelve months belonged to men in white leisure suits, not white armor, and a gang of greasers.

In January, the soundtrack to Saturday Night Fever hit No. 1 on the Billboard charts. It would sit there through the 4th of July. The second half of the year belonged to Grease, which topped the charts for 12 weeks.

Safe to say, it was a year for dancing. Disco dominated, with a few gushy love songs sprinkled in the mix for slow dancing and couple skates. Let's take a listen to the ten biggest jams of 1978.

We have arranged this alphabetically, but we still begin with the winner. Honestly, this list could have been mostly Bee Gees. The Brothers Gibb racked up shocking sales figures in '78. "Stayin' Alive" has come to represent Saturday Night Fever as a single song, but the mellower "Night Fever" was a bigger chart success. It topped the Hot 100 for eight weeks in spring, going on to become the top-selling single of the year.

Just hearing it makes you want to strut down the sidewalk, swinging a can of paint. A No. 1 hit for four weeks, "Stayin' Alive" was a bigger song overseas. "How Deep Is Your Love" was the first single off the Saturday Night Fever soundtrack, a fall '77 release that still had legs in the early new year.

Dropped in the autumn of '77, whereupon it became an immediate smash, Boone's booming ballad won the Grammy Award for Song of the Year in 1978. It still managed to become Billboard's third biggest song of the year for 1978, more than a year after its release. Meanwhile, Johnny Mathis and Engelbert Humperdinck recorded their own versions of the tune, ensuring there was no escaping it, especially in grocery stores and waiting rooms.

With its third single, Chic finally reached the major leagues, and No. 1 for the first time. Nile Rodgers trademark chucking guitar continued to echo for decades, as he lent his skills to hit singles for David Bowie, Madonna and Daft Punk. Released late in the year, "Le Freak" grooved to the top throughout the holiday season and funked its way into 1979.

Now just associated with Lionel Richie, people forget he recorded the song with his group the Commodores. Surprisingly, despite the dominance of disco music, this would be the only Motown song to reach the Top 10 on the Billboard charts in 1978. It climbed to No. 1 for two weeks in August.

Every Gibb was a winner. The Bee Gees magic touch carried over to their youngest brother. Of course, the song was essentially a Bee Gees single in all but name, with Barry both writing and producing, along with the helping hands of Robin and Maurince. It topped the charts for seven solid weeks.

Now lumped into the soft-rock category, "Baby Come Back" is a funk song. Seriously. Listen again. That opening bass line would make any hip-hop producer salivate. It was the only number to knock the Bee Gees off the peak of the pop charts in the first half of the year.

Dave Barry once wrote that "MacArthur Park" was "the worst song ever written." He was largely referring to the original, sung by actor Richard Harris a decade early. Certainly, it's ridiculous to call any Giorgio Moroder / Donna Summer collaboration "the worst." Them's fightin' words. After sitting pretty atop the charts for three weeks, the song led to Summer's her first nomination for the Best Female Pop Vocal Performance Grammy.

How's this for a debut single? The disco duo topped the charts for three weeks, and went on to sell two million copies of the record.

10. John Travolta and Olivia Newton-John - "You're the One that I Want"

"Tell me about it, stud." Sorry, Broadway. Two songs were written specifically for the film adaptation of the stage musical — this and "Hopelessly Devoted to You" — and the pair soared above the other numbers. "You're the One That I Want," with its karaoke bassline, rushed to platinum status. It remains one of the best selling singles of all time.

Mob39 24 months ago
I totally remember listening to the grease medley that they would have on the a.m. radio. Always listening with my cousin and getting excited when they would play it! Still, when someone says what’s the word… I always say Grease, and nobody ever gets it… Too bad.
Like (1) Reply Delete

Lacey 52 months ago
My gosh, what a year.
Never again folks.
Never again.
Like (1) Reply Delete