A history of 7UP told through 14 fascinating ads

Flip through the past with these vintage 7UP advertisements that used everything from lithium and babies to Wonder Woman and Bond villains to sell the Uncola. 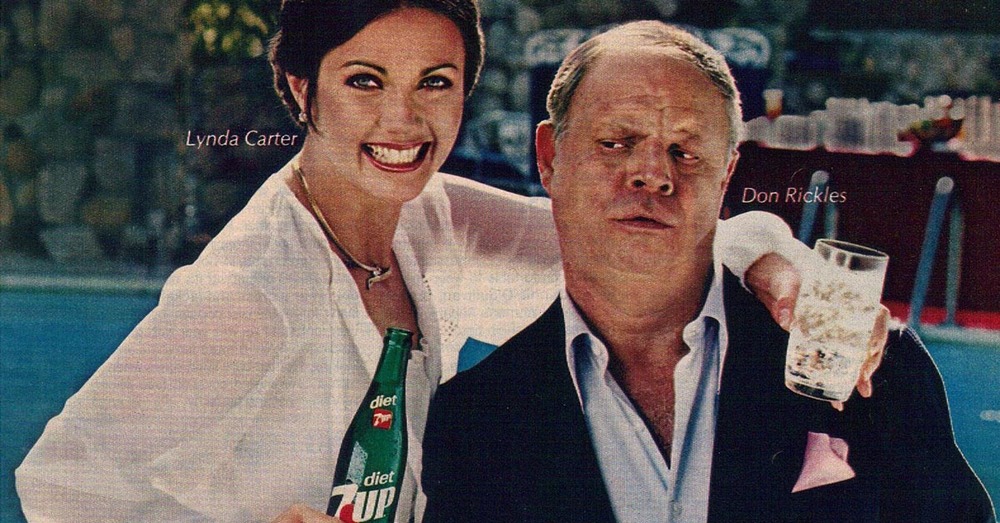 The 7UP soft drink was launched in 1929, a matter of days before the great Wall Street crash that kicked off the Great Depression. Bad timing for a product launch. Then again, perhaps not. In its earliest incarnation, 7UP, then sporting the less zippy name of Bib-Label Lithiated Lemon-Lime Soda, was a mood altering drug. Literally. One of the ingredients was lithium citrate, a compound used to stablize bipolar patients. It was a different era.

From its nascent pharmaceutical days through the boomer boom to cola wars and into the modern era, 7UP has continually altered its image. It's advertising has included babies, a James Bond villain, Wonder Woman, and a red circle wearing sunglasses. Let's take a tour through some of the most memorable 7UP print ads.

Here's a phrase you'll never see on a soda ad again: "For Hospital or home use." Note the "slenderizing" claims, too. It took "the ouch out of grouch." So that just left growling? 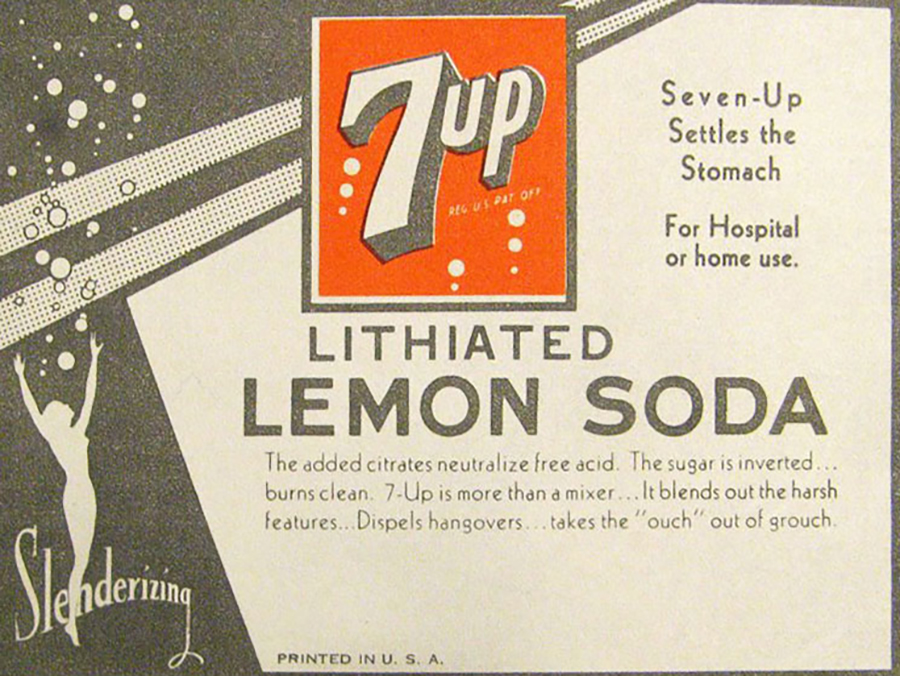 Lithium citrate was removed from the formula in 1950, around the time of this ad in The Saturday Evening Post. For years, the campaigns had used the slogan "Fresh Up – Keep Smiling." In the 1950s, this was shaved to "Fresh Up." 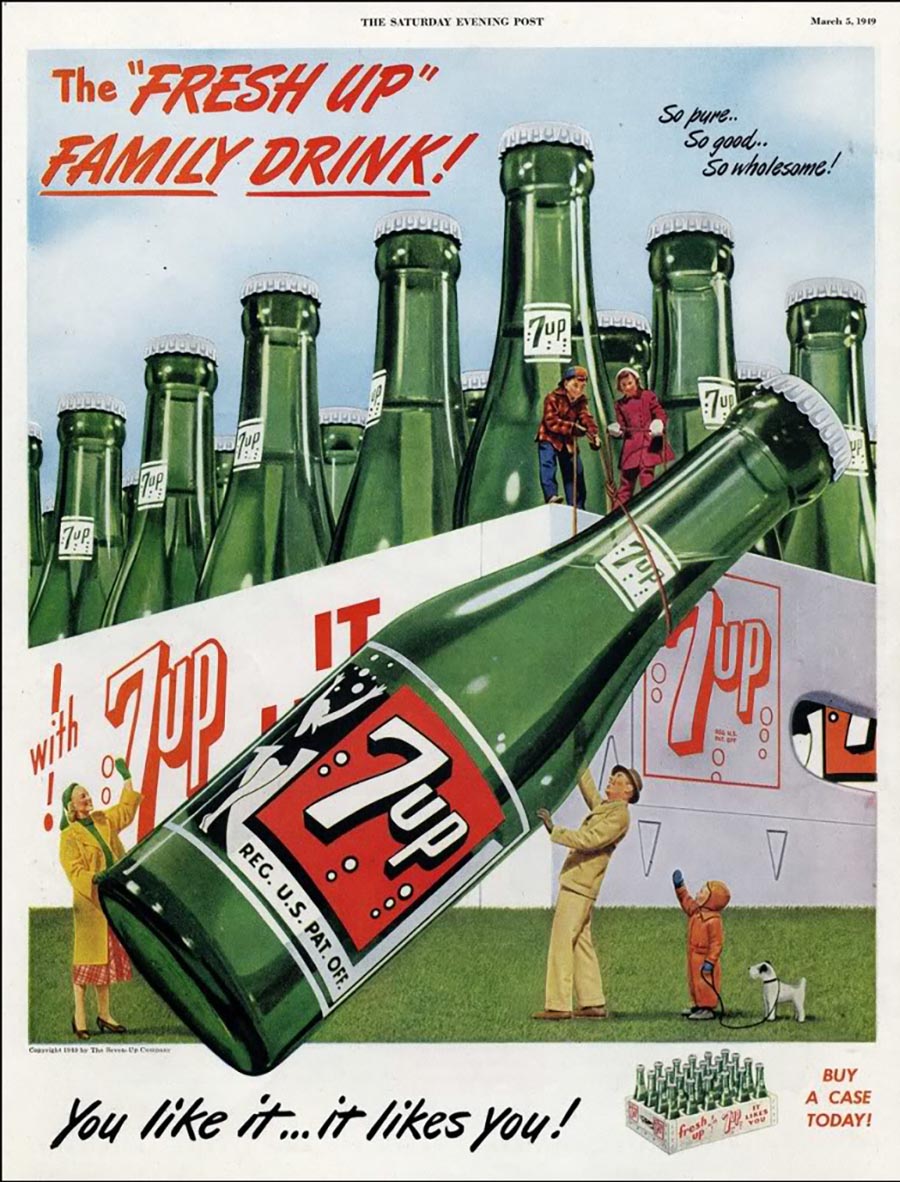 The lemon-lime pop was pitched primarily to mom and pop in this era. 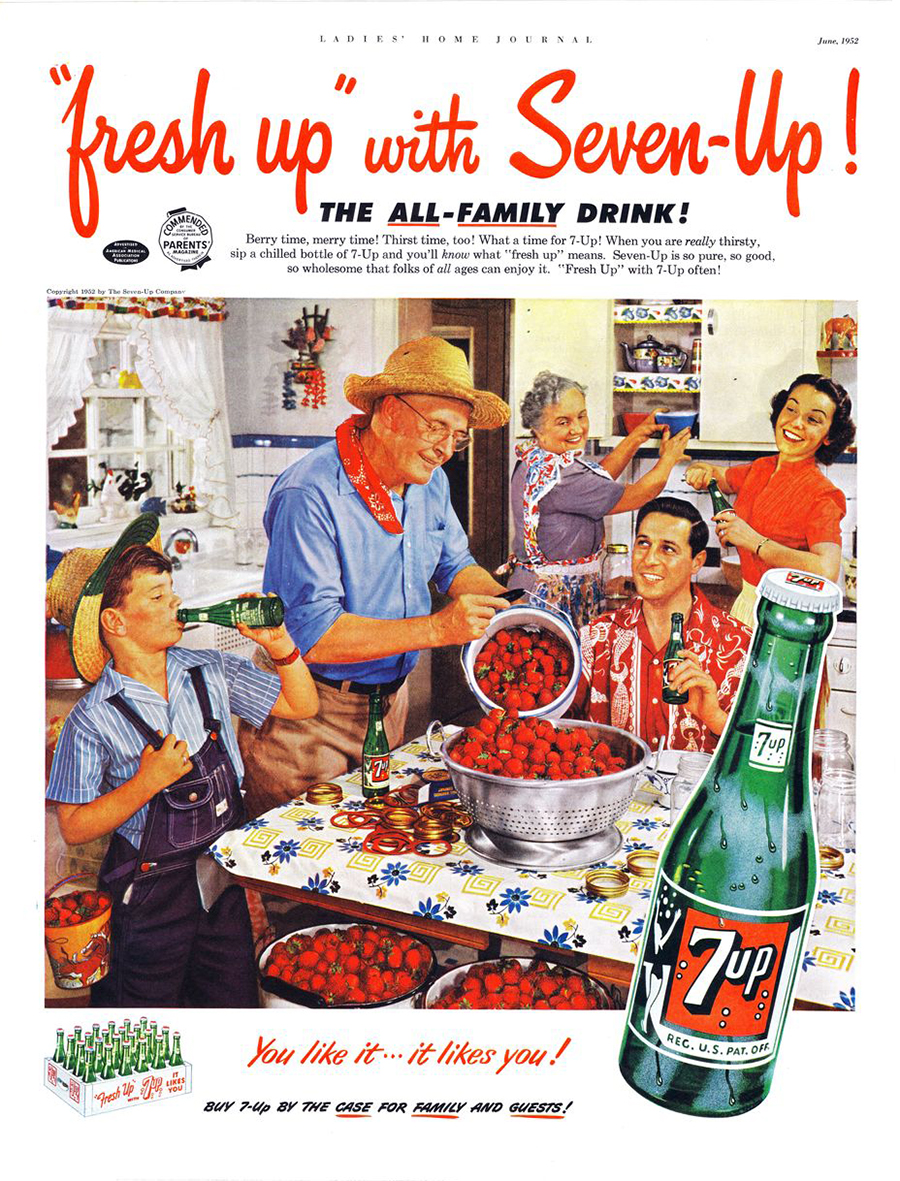 The whole family, actually. This ad suggests mothers add 7UP to baby's milk in equal parts. The fine print to the side promotes Soldiers of Fortune, a TV action series sponsored by 7UP. 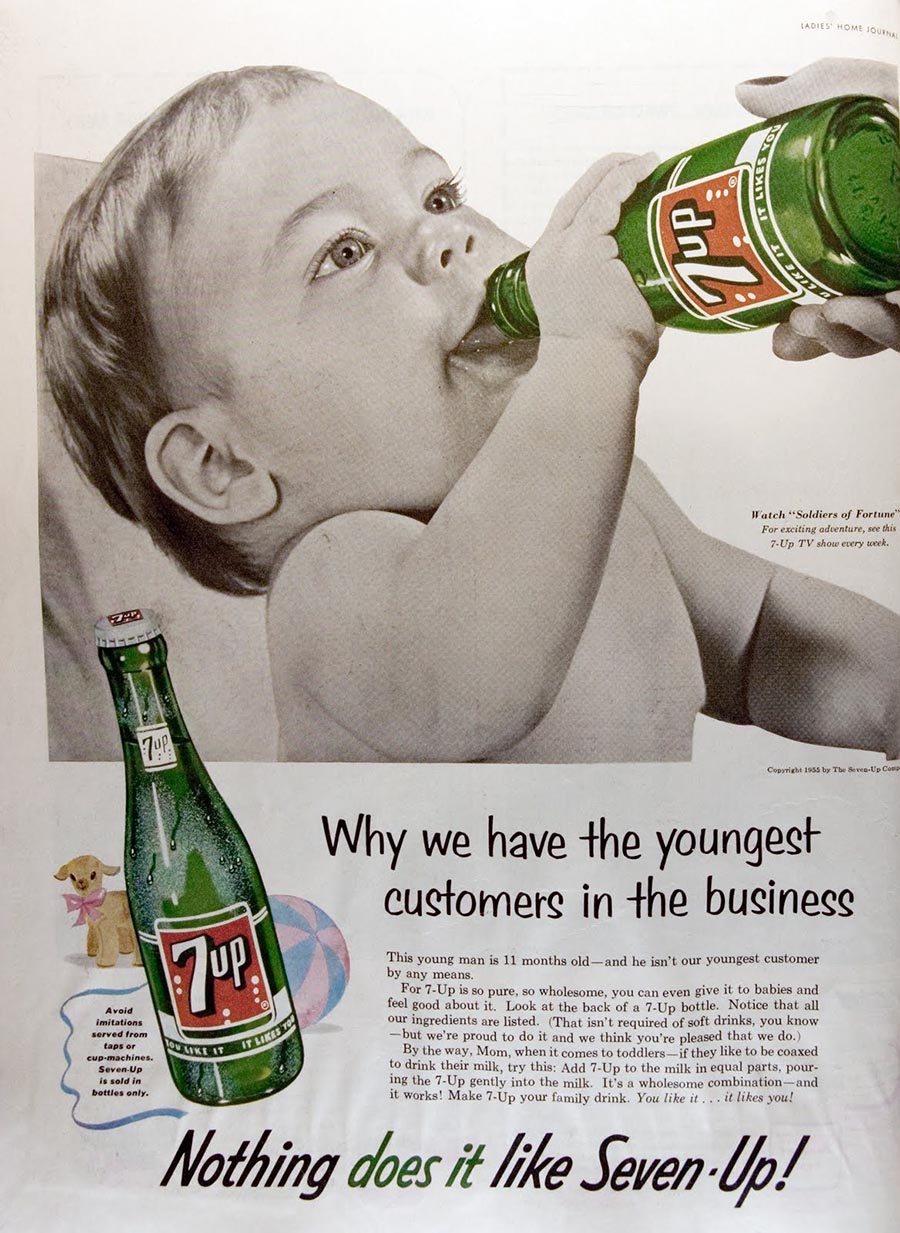 In the 1960s, 7UP tried to nab the booming teenage market. "Leaves no stickiness in your mouth," kids. 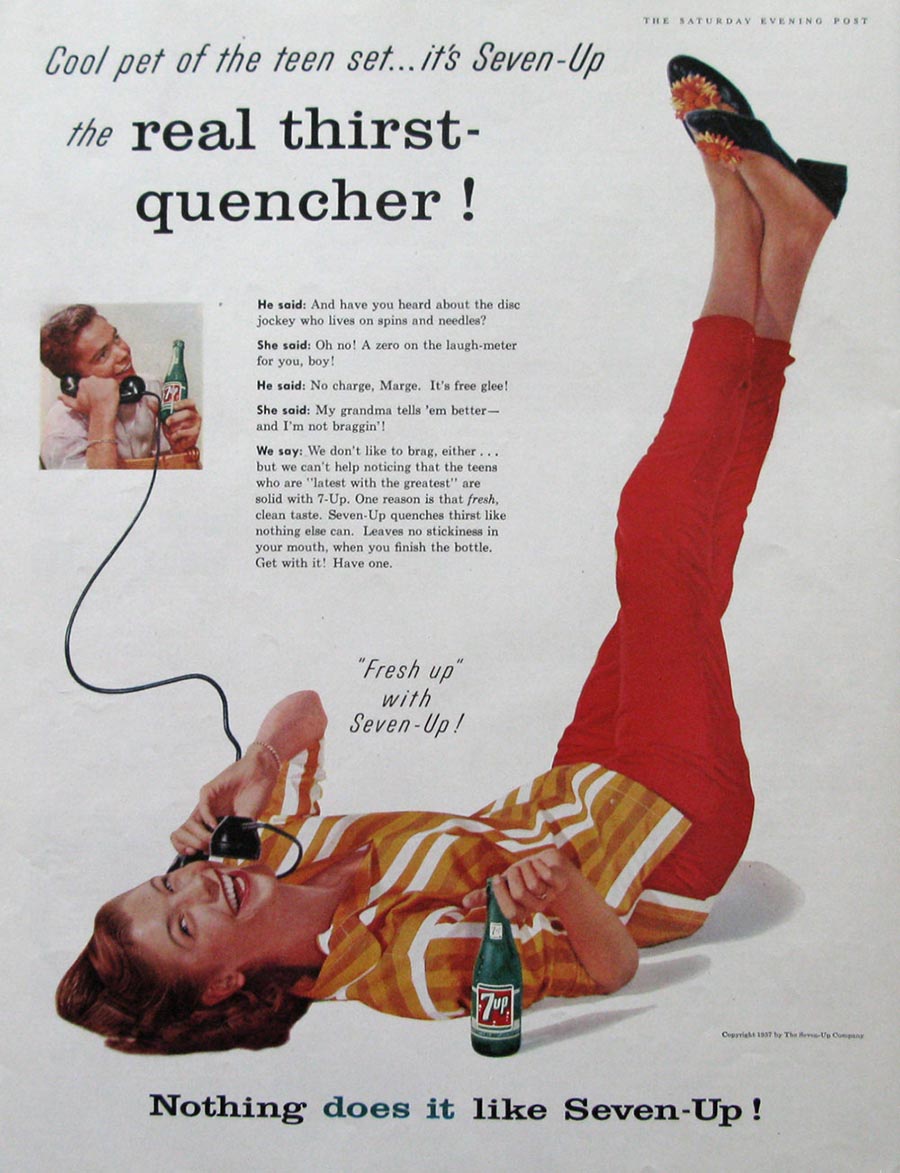 Around this time, the ads also often sold the idea of ice cream floats, perfect for boys and girls to share with two straws on a date. 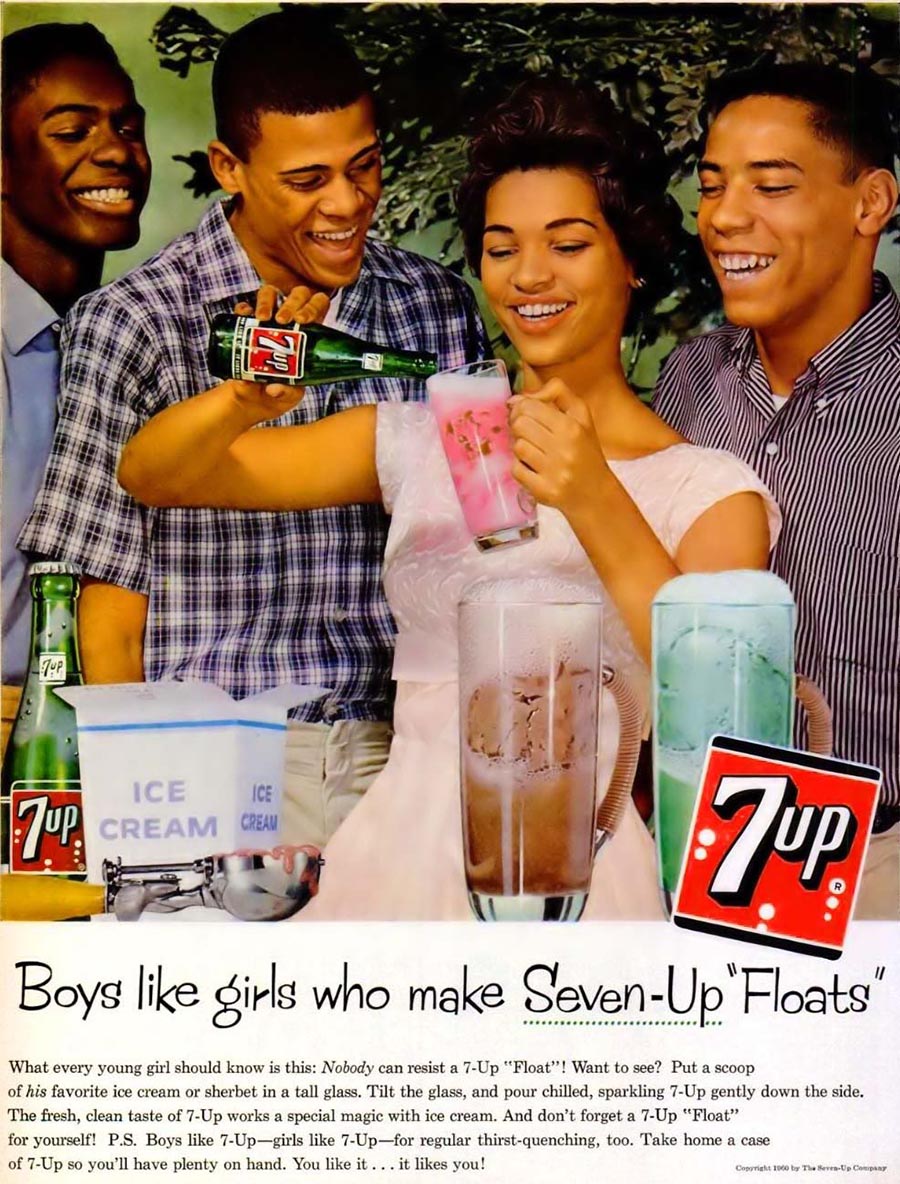 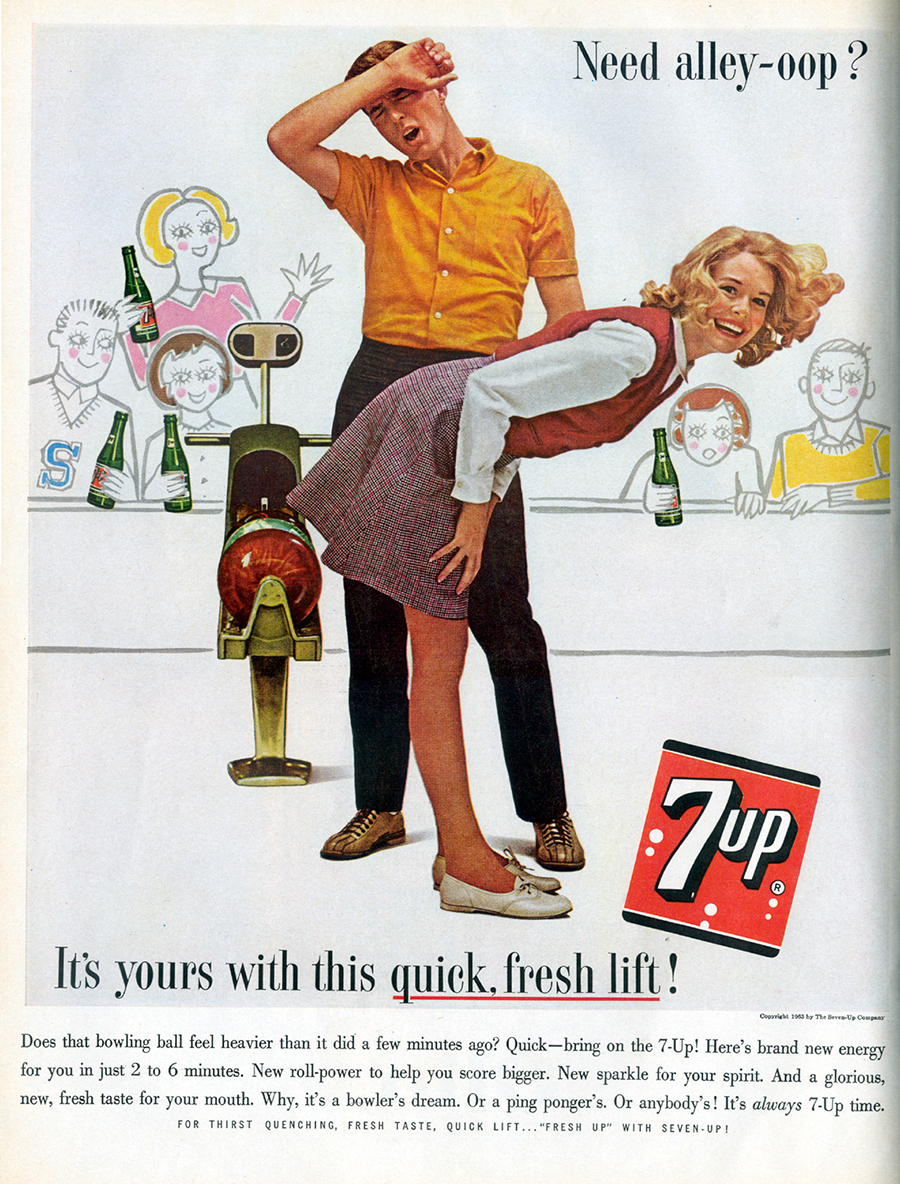 In the 1970s, diet colas became the rage. This simple ad for Sugar Free 7UP hit magazines circa 1973. 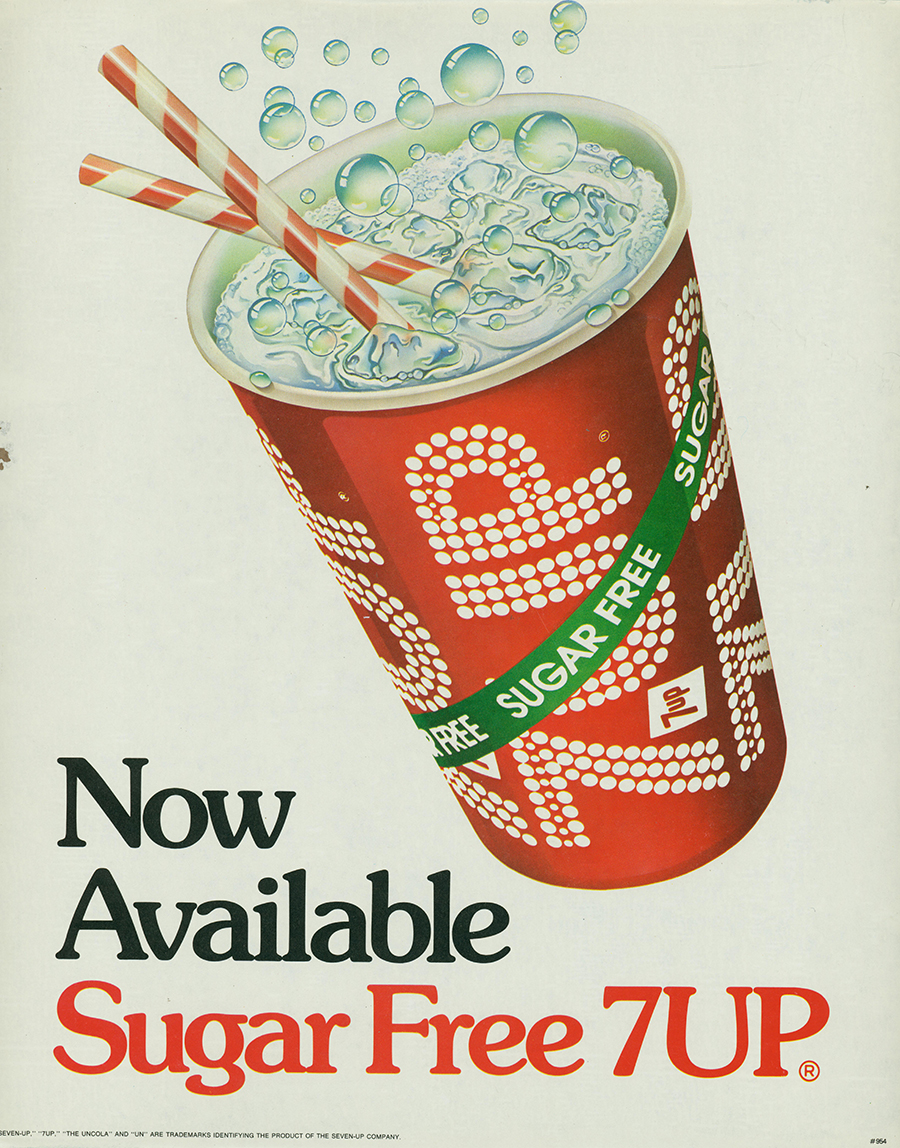 "Sugar Free" switched to "Diet" at the end of the 1970s, and celebrities were brought in to pitch the slimmer soda — and what celebrities! Lynda Carter and Don Rickles? We want to hang out at that pool, please! 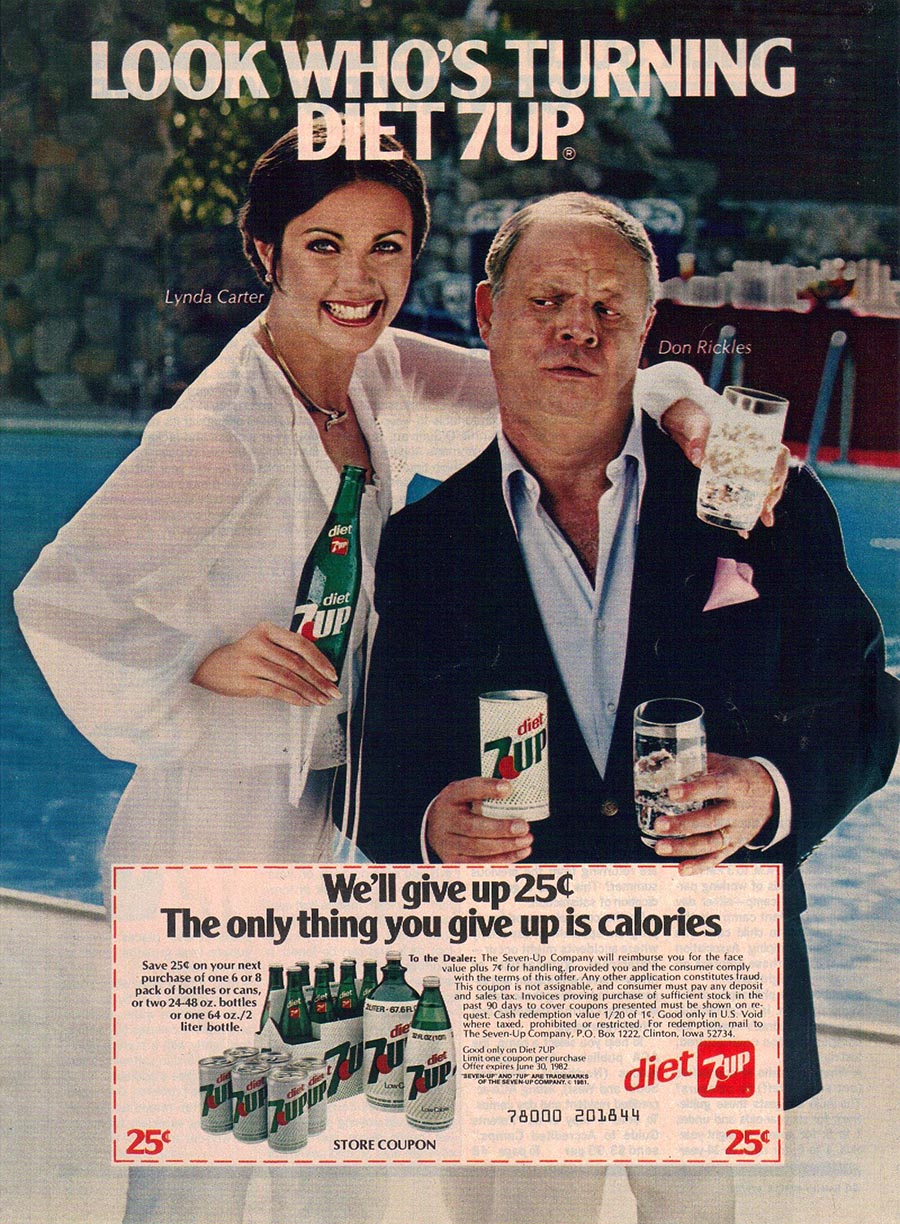 The 1970s also saw the introduction of the famous "Uncola" campaign. 7UP sold inverted soda glasses and pitched itself as the clear alternative to Coke and Pepsi. 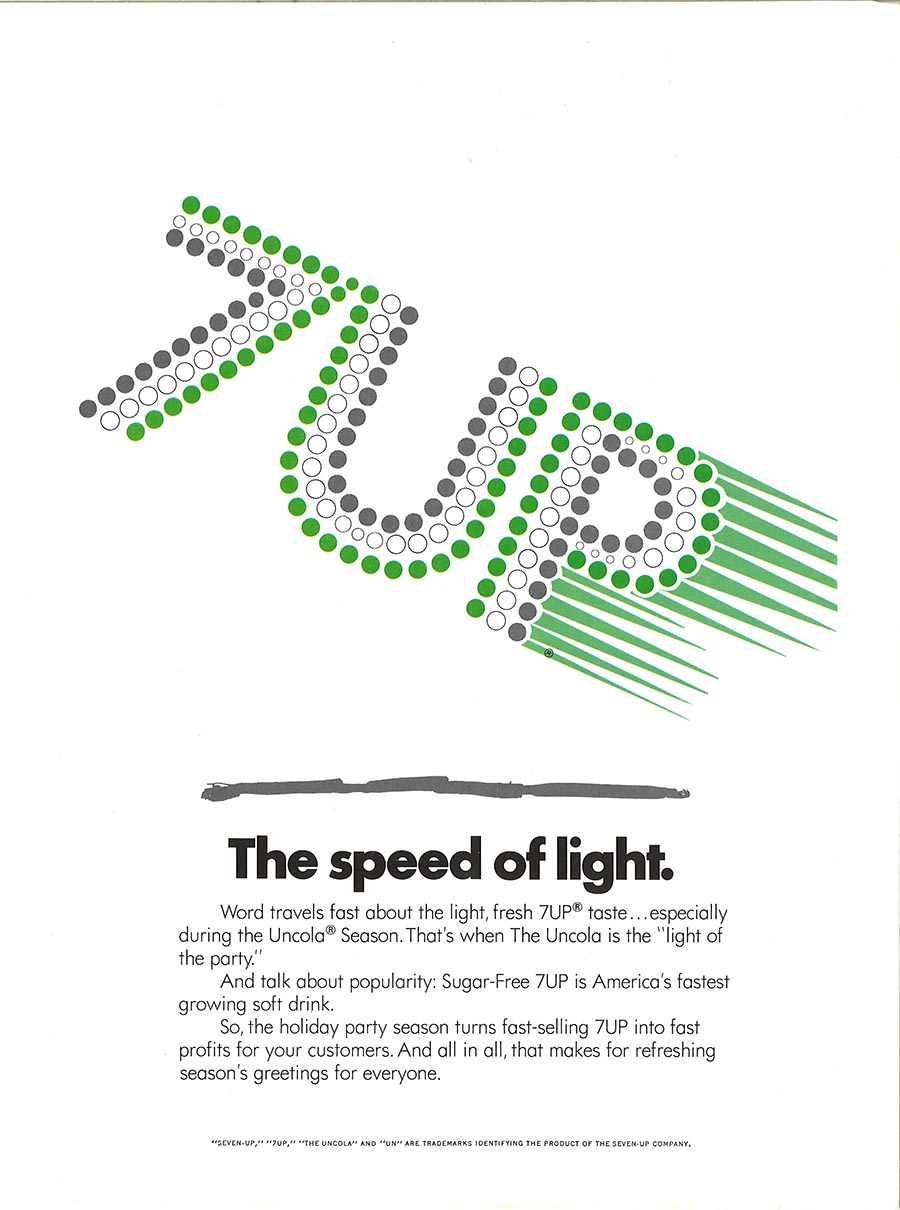 Geoffrey Holder, not long after playing Baron Samedi in the Bond movie Live and Let Die, starred in television ads pitching the "Uncola" and was forever linked with the brand. 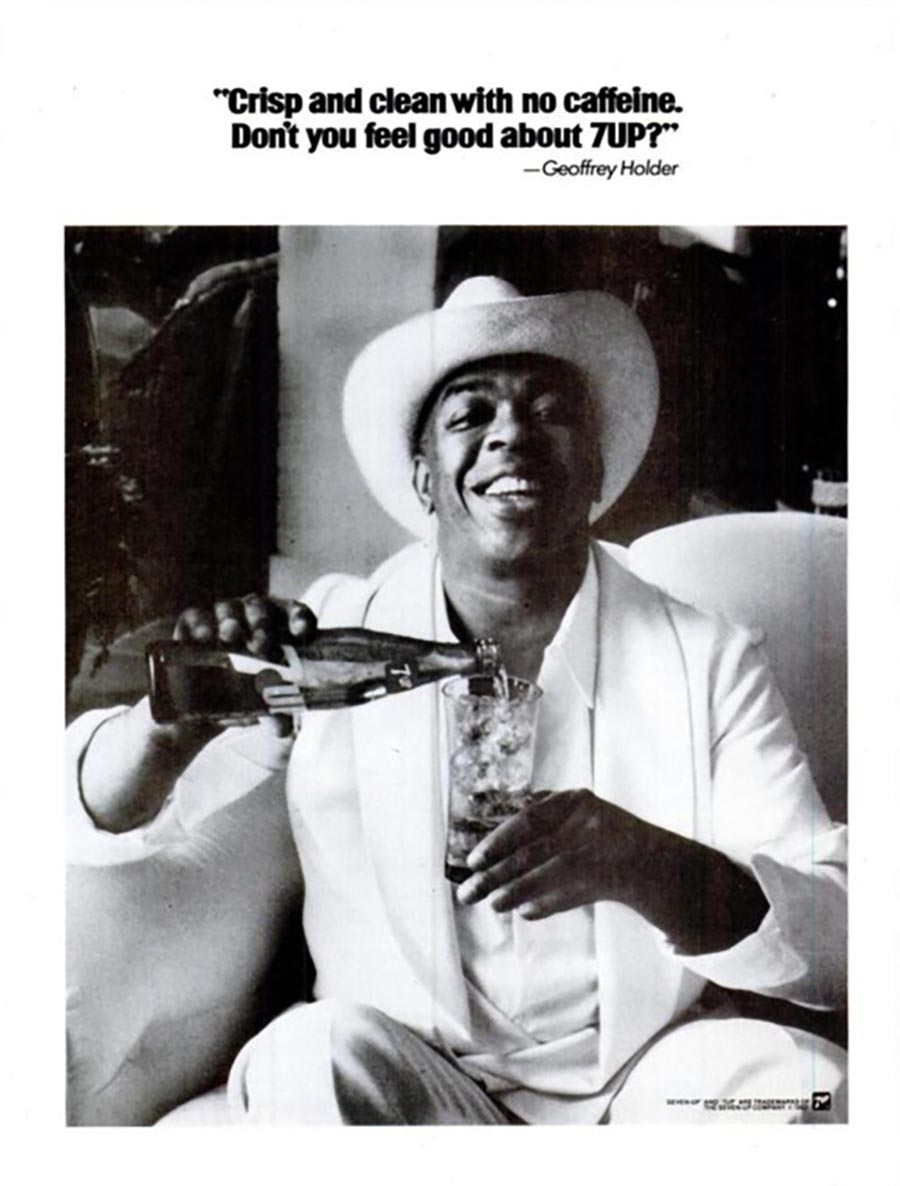 The cream of the professional atheletic crop were in for 7UP in the early 1980s. Schmidt and Brett had faced off in the 1980 World Series. 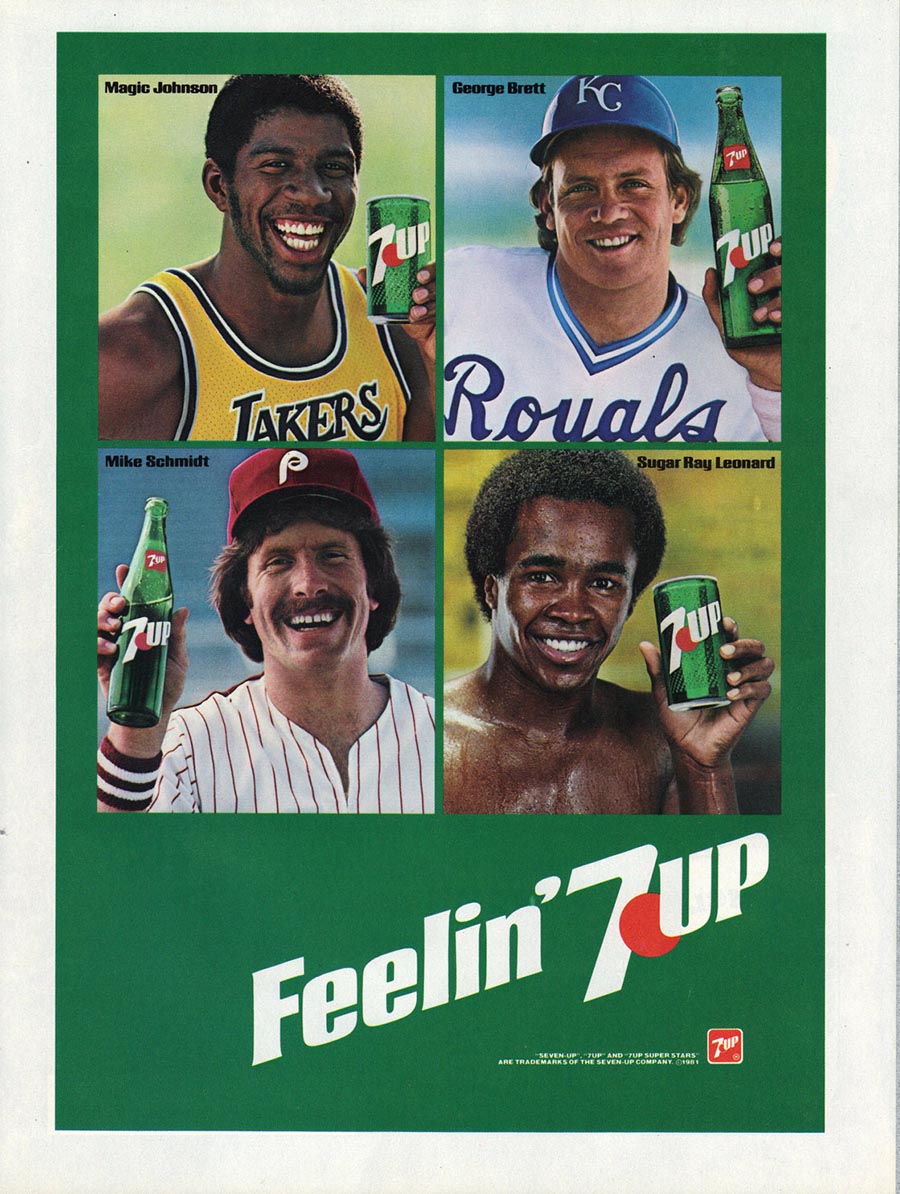 After Dominos unleashed The Noid, after the California Raisin craze, ever product wanted a cool cartoon mascot. 7UP animated the dot from its logo and slapped on some sunglasses. While no Spuds MacKenzie, Cool Spot did earn his own video game. 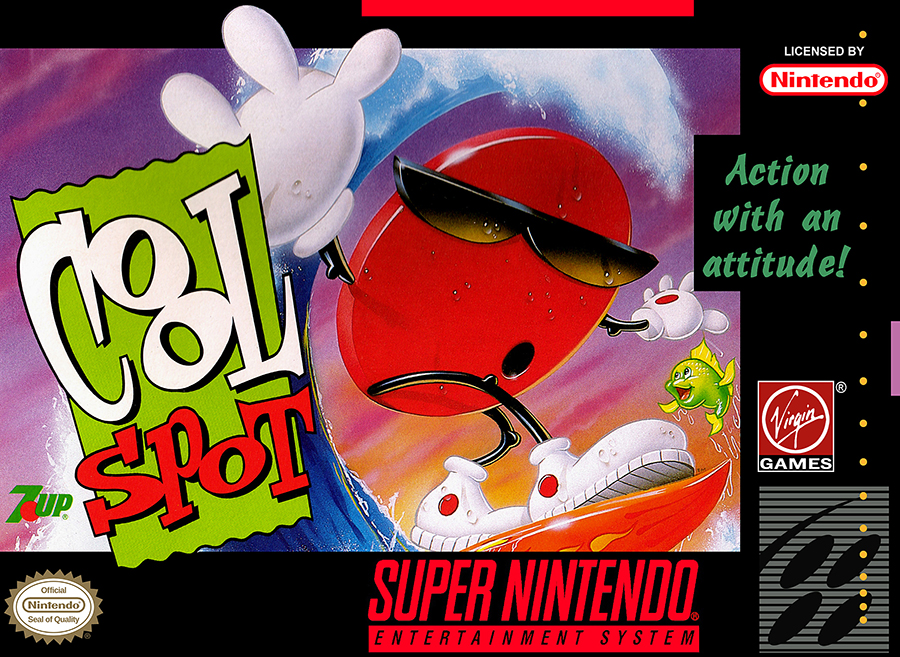