Barney, we're not in Raleigh anymore… 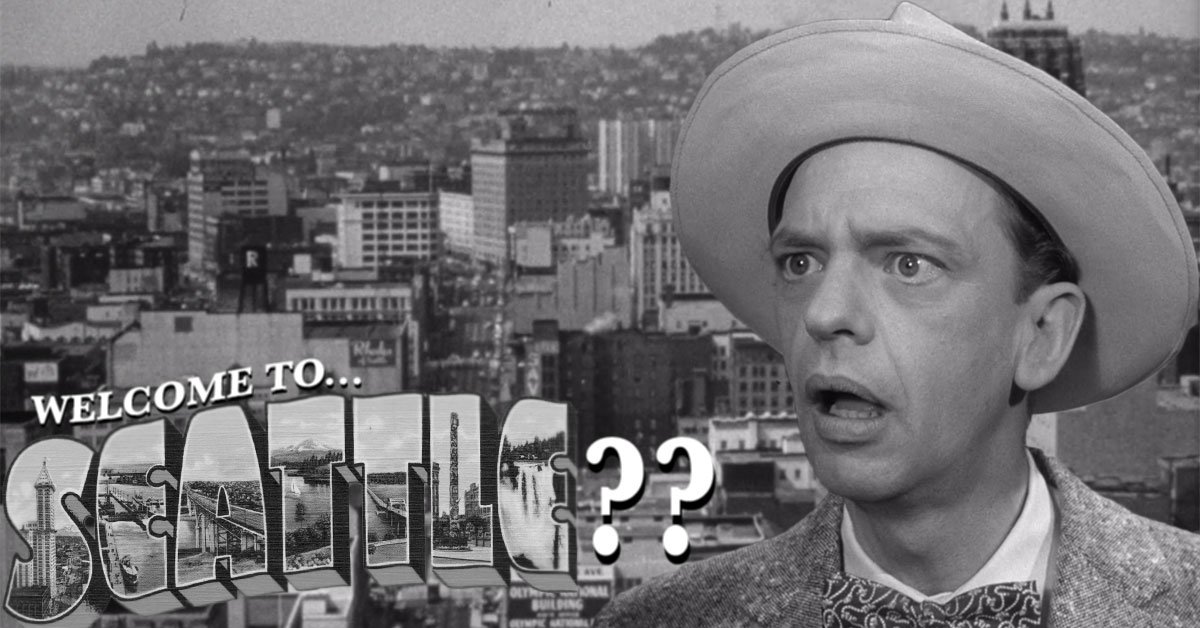 Near the end of season two, The Andy Griffith Show finally traveled far outside of Mayberry. Andy and Barney head to the state capitol on business in "Andy and Barney in the Big City." Barney immediately takes a shine to urban life.

"You know, Andy, this is where I really belong," the deputy says to his boss, leaning against the hotel counter. "Barney Fife in the asphalt jungle." 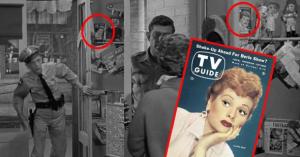 did you know?1960s1950s
The same TV Guide issue with Lucille Ball kept popping up on The Andy Griffith Show

Just prior to that scene, the episode shows a couple of establishing shots. We see a city bus drive by the exterior of a hotel. Before that, the camera hovers high over the skyline, showing the skyscrapers and bustling traffic of… Seattle?!

The "Big City" of the episode is Raleigh, which should be about, oh, 140 miles east-southeast of Mayberry. Instead, the two pals end up 2,734 miles in the opposite direction, if you trust what the camera is showing you.

Of course, The Andy Griffith Show did not film in North Carolina. That being said, it did not film in the Pacific Northwest, either. As the closing credits explained week after week, the sitcom "Filmed at Desilu," in Culver City, California.

We tried to trace the origin of this insert shot, this B-roll footage, to no avail. Between the 1940 MGM documentary Seattle: Gateway to the Northwest and the grunge era, not many major productions filmed in the city. It was likely just stock footage.

Sixty years later, the genesis of the shot is not so interesting as what's seen in the image — and one iconic landmark that is not seen. Especially for those familiar with the Emerald City. 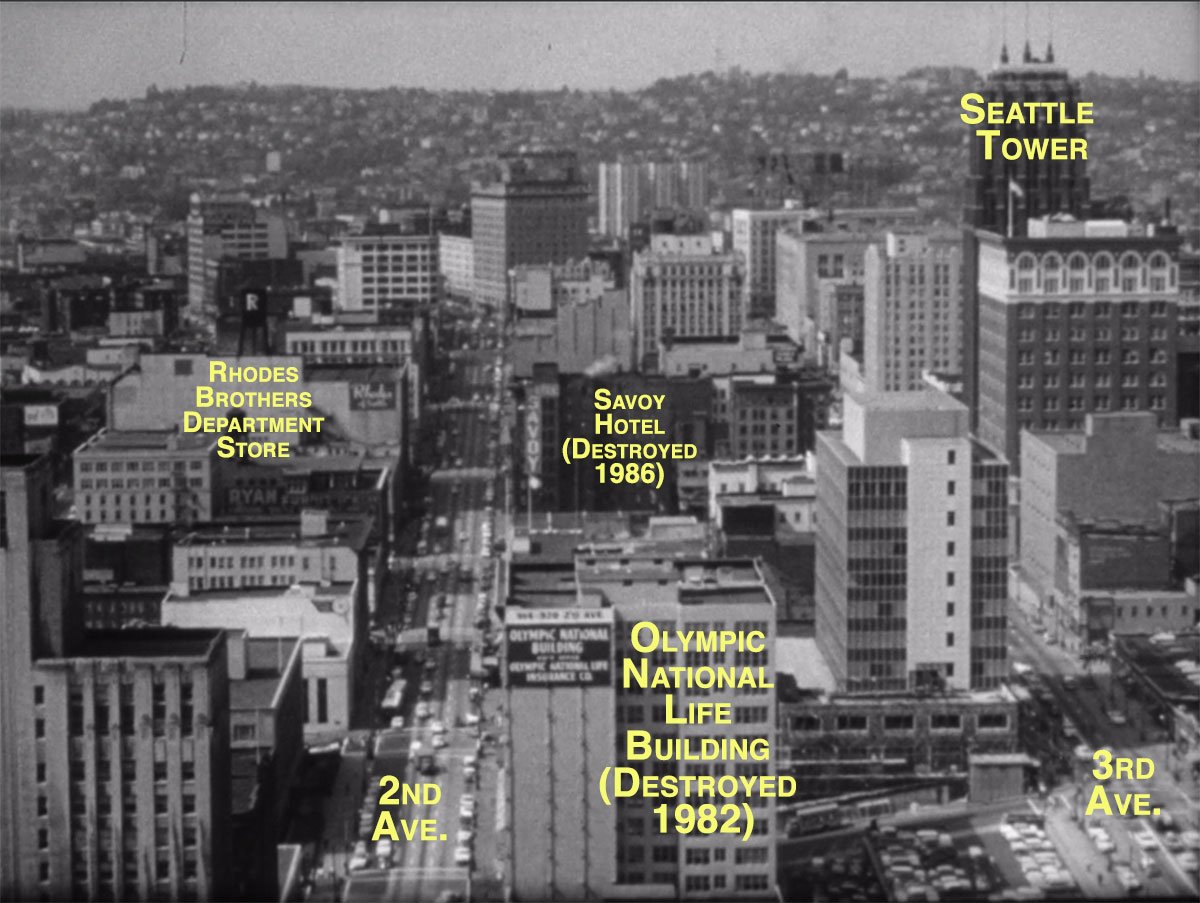 First, some perspective. The camera is pointed north up 2nd Avenue in Seattle, floating somewhere above Cherry Street. The hills in the background would be the Queen Anne neighborhood.

Between the buildings and the hills, about in the center of the image, you would expect to see the Space Needle. "Andy and Barney in the Big City" aired in March 1962, mere weeks before the Space Needle opened in April 1962. Construction began on the futuristic tower in 1961. That dates this footage to at least before that time. Just picture how sci-fi that saucer would have looked over this skyline!

The Seattle Tower stretches high above the other buildings on the right of the screen. Today, that architectural beauty is dwarfed by modern skyscrapers and condos that shoot up like mushrooms in the post-Amazon era. The dazzling, prismatic Seattle Public Library is nearby today.

Perhaps The Andy Griffith Show selected this image due to a water tower on the left emblazoned with the letter "R." It could stand for Raleigh. In reality, it was the Rhodes Brothers Department Store. In 1968, Pay 'n Save purchased the store and rebranded it Lamonts.

The reason behind this scene's appearance may remain mysterious, but we can thank its existence for a clear glimpse at Seattle's bygone skyline.

jeopardyhead 24 months ago
This episode always reminds me of a promo for The Andy Griffith Show WGN did several yrs. ago. It shows various images of Chicago while dialogue from this episode plays in the background, suggesting that the "big city" Barney and Andy are referring to is Chicago. It ends with the exchange "Now, Barney, you know we are off duty." "'Off duty'? When is a lawman ever really off duty?"
Like Reply Delete

Larry 37 months ago
"You know, Andy, this is where I really belong". Interesting that when Barney left the show. he ended up in the big city.
Like Reply Delete

misto 37 months ago
this is strange.im not sure about anything anymore....i know barney went to the coffee shop and had a coffee and donut.i saw him sitting there minding his own business.
Like Reply Delete

anthony 37 months ago
Is the Elliott Bay Towers in shot?
Like Reply Delete

DavidBarker 37 months ago
This is a fun fact, never knew this...
Like Reply Delete

Utzaake 37 months ago
Always get a kick out of TV series that alter the geographic reality. A perfect example is this season's premiere of The CW's Supergirl. The fictional National City is portrayed by overhead shots of downtown Los Angeles, but the 2010 Winter Olympics Cauldron is featured in the cold open and the Pacific Coliseum plays a sewage treatment plant because the series is filmed in Vancouver, BC.
Like Reply Delete

LvMyTaffy Utzaake 37 months ago
Supergirl is filmed also in the town I live in Dallas,Ga..
Like Reply Delete

TVFF 37 months ago
The city I grew up in. Went to the Seattle World's Fair as a tiny tot, one of my favorite memories of my whole life. I doubt that I ever even noticed that shot was Seattle since typically when TV shows and movies show Seattle they of course have a shot that includes the Space Needle. I just checked it out and it goes by quite fast, another reason I probably never noticed, but funny to see it in there.
Like (2) Reply Delete