Discover the true source of "Aayyy!"

Probably every person on the planet has done an impression of the Fonz. The cool greaser is an extremely iconic TV character, and his catchphrases are plastered over memes that even delight the kids who never saw Happy Days. Fonzie is just that likable, exactly the kinda guy everyone loves.

But it's not just the catchphrases Fonzie says. Fonzie's voice is something distinctly fun to mimic. The deep tenor, the careful, assertive cadence. It's a very specific TV reference to repeat his catchphrase in his voice and in an interview with the Archive of American Television, Henry Winkler once explained the inspiration for the precise way Fonzie spoke.

You see, just before Winkler joined the cast of Happy Days, he was spending a lot of time with a buddy other than Richie in a different production. 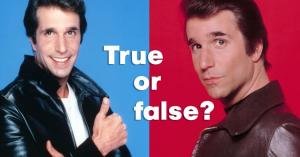 1970snostalgia
Can you ayyy-ce this true or false quiz all about The Fonz?

For the low-budget movie The Lords of Flatbush, Winkler was cast as one of four teenagers in a Brooklyn gang, depicted as a bunch of tough guys who hung around a malt shop and talked tough about all the tough stuff they did. Sylvester Stallone was part of this unruly gang, and behind the scenes, the rising star became a person who absolutely fascinated young Henry Winkler.

In the interview, Winkler explains that this was pre-Rocky Stallone, describing Sly as "beefy" and not "cut the way he is now or when he did Rocky."

"He was very big," Winkler said, before launching into an impression of Sly. "He would say to me, 'What is that guy looking at? I’m gonna eat him.'"

Throughout the interview, Winkler repeats this line "I'm gonna eat him," doing his impression of Sly, which, as you might suspect, sounds exactamundo like the Fonz. In Winkler's mind, the two sound the same.

Winkler went on to describe how intrigued he was by Stallone, who had this tough exterior, but this tenderness inside. The more he got to know Stallone, the more he found him to be extremely witty and funny, a talented artist and painter, with complicated ideas he could articulate with ease.

In fact, Stallone did not just launch to stardom through performing in The Lords of Flatbush — he also wrote lines of dialogue for the movie, proving that Stallone's unique voice caught the attention of more ears on the set. Of course, soon after, the whole world got to know Stallone's brilliance, quoting Rocky Balboa's most famous lines, penned by screenwriter Stallone.

"He is just a fabulous human being," Winkler said.

And that's why he decided to base the Fonz's voice on Stallone's, because he wanted to show that here was a tough guy who could be tender. Who could become Richie Cunningham's best friend, and eventually part of the Cunningham family. That was the sort of brotherhood that Winkler and Stallone found on set, finding humor in Sly's ridiculous claims of "I'm gonna eat him," which ultimately led a chorus of Fonzie fans to say for decades to come: "Aayyy!" 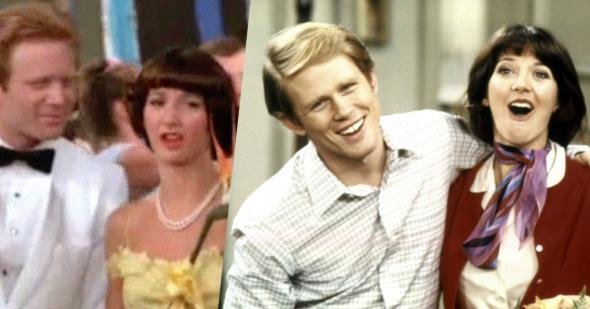 Did you know?1970s1950s
Even the Beatles cashed in on Happy Days, much to the chagrin of John and Ringo
Are you sure you want to delete this comment?
Close

AgingDisgracefully 24 months ago
That's weird.
Sylvester inspired ME to reconsider movie-going as a regular activity.
Like Reply Delete

jimmyvici 24 months ago
...yep. Still a dork.
Like Reply Delete

Krn jimmyvici 24 months ago
Winkler or Stallone?😀
Like Reply Delete

jimmyvici Krn 24 months ago
Based on the picture, take your pick.
Like Reply Delete

Barry22 24 months ago
I remember seeing this movie in the Fall of 1974. Not very good.
Like Reply Delete

Claude Barry22 24 months ago
It's one of my favorite movies....
But, then again...I was born & raised in Brooklyn in the 60's and this movie is basically
a home movie/photo album of my parents life growing up.
Like (1) Reply Delete

MrsPhilHarris Claude 24 months ago
I loved it when I first saw it.
Like Reply Delete