Barney to Floyd: "You cannot call me Al."

April 18, 2019, 10:20AM By MeTV Staff
On Now
Floyd repeatedly called Barney ’’Al’’ through one episode of The Andy Griffith Show
Up Next:
Share

In Mayberry, everybody remembers Floyd as the barber, but every now and again, he'd step up to accept bigger duties in one of TV's favorite small towns. Don Knotts once explained how the special friendship between Barney Fife and Floyd Lawson led the barber to become an occasional authority figure in Mayberry: "[Barney] was always friendly with Floyd, but he also sort of lorded himself over him. He’d bring him in as a deputy every once in a while. He’d deputize him and become his boss. Barney loved to do that.” 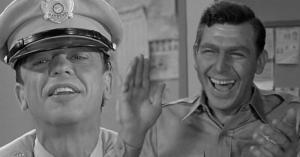 That's why it's extra funny when you revisit the third season episode of The Andy Griffith Show called "Convicts-At-Large" and find Barney and Floyd's friendship pushed to an unexpected extreme that leads Floyd to be the one "lording over" Barney for a change.

In the episode, three escaped female convicts hold Barney and Floyd hostage in their cabin. Throughout the episode, the convicts call Barney by the wrong name, referring to him exclusively as "Al," no matter how many times he insisted he was not Al. Out of fear or perhaps a bit poking fun, Floyd picks up on calling Barney by the name of Al, too, and what results is a sequence of scenes that likely would've confused any viewer tuning in late that season. Watch the clip above to see Barney warn Floyd the Barber that he cannot call him Al.

Can you imagine a Mayberry where Barney Fife is actually named Al? Al Fife just doesn't have quite the same ring to it.

SunisaPetchpoo 20 months ago
Floyd and Al are hilarious in this episode!
Like Reply Delete

FredMay 43 months ago
I wanted to let you all know that I Love Your station! I watch it all the time. Those old shows to me were the best! They remind me of a happier time in my life. Thank You so much METV I am a huge and I always will be!
Fred May
Like Reply Delete

barney4me 43 months ago
I agree....incredibly funny....coming up with the name AL was perfect! :)
Like Reply Delete

MrsPhilHarris 43 months ago
One of my favourite episodes!
Like (1) Reply Delete