10 vintage Halloween foods that were more trick than treat

Does anyone really want mummified grapes? 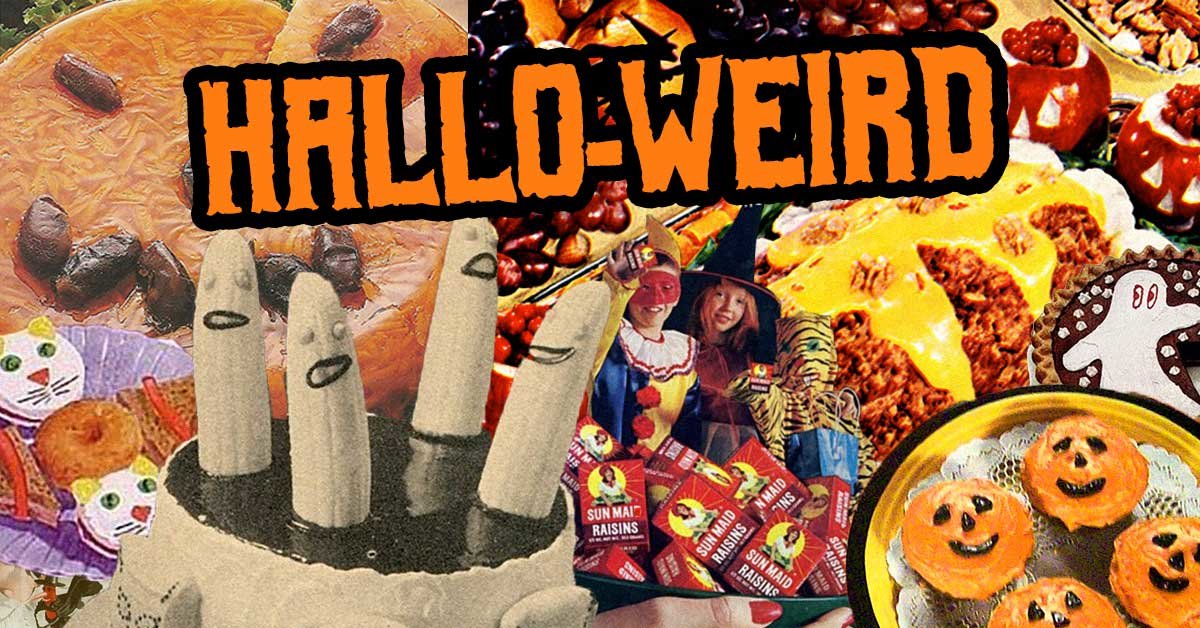 When it comes to eating on Halloween, one word comes to mind: candy. As a child, the holiday was all about trick-or-treating for sackfuls of chocolate and sugar confections.

Everyone had their favorites (perhaps the snack-sized Snickers) and their least favorites (maybe the Bit-O-Honey bars) but we could all agree on one thing — only a true monster would hand out dried fruit. And with that in mind, we begin this look back at bizarre Halloween eats with the shriveled snack no costumed child wanted. 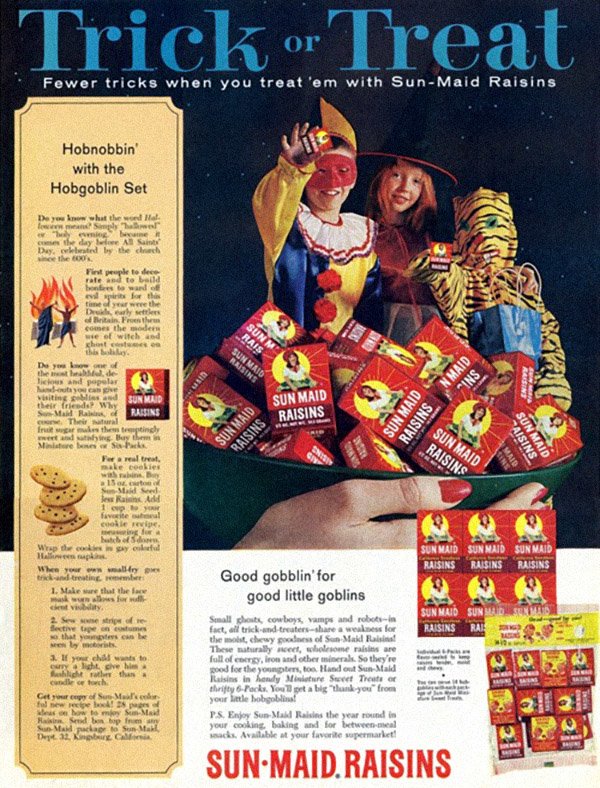 Look, Halloween is not the time to be healthy. Even two out of the three children appearing in this advertisement had to hide their face for acting so enthusiastic about desiccated grapes. 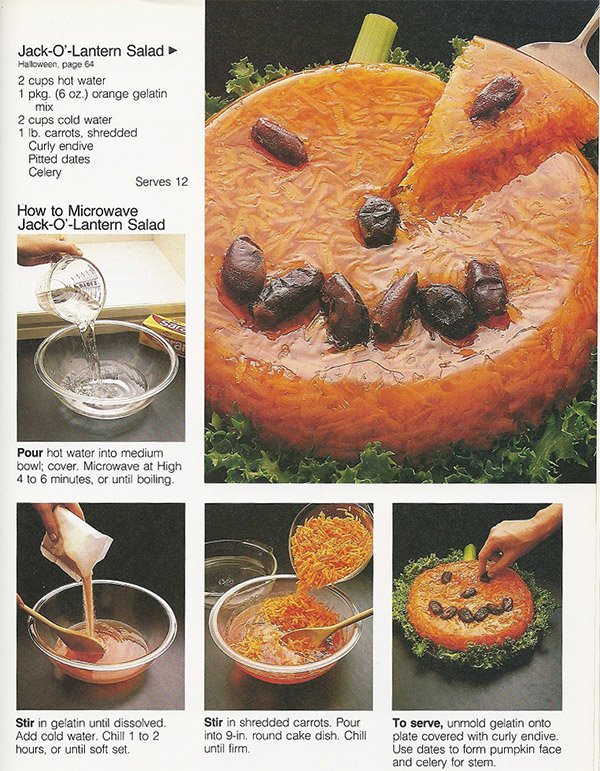 First you try to sneak raisins into our pillow cases, now you're encasing carrots in Jell-O. 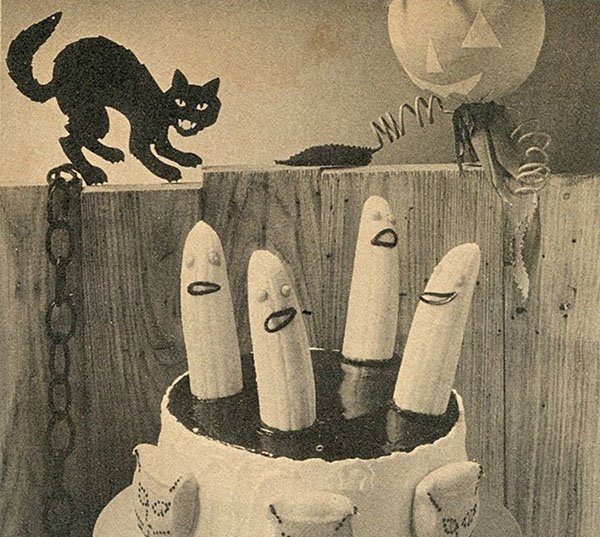 This probably doesn't taste too bad, but the bananas look like Mr. Bill just before he gets squashed. 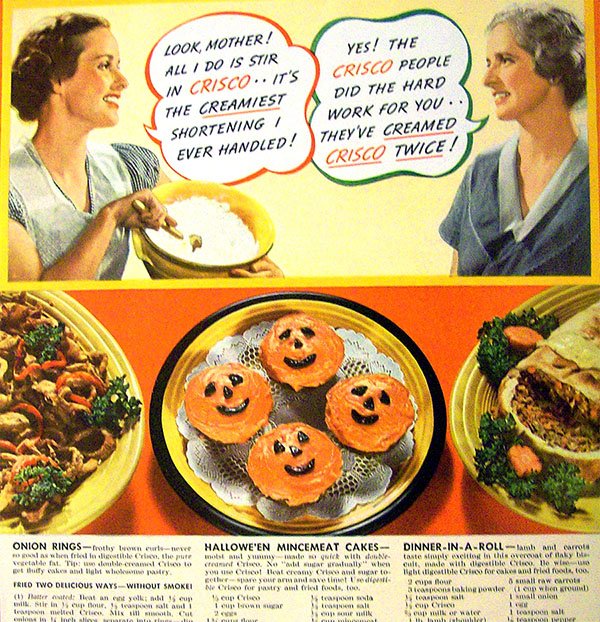 A true trick? What appears to be a cupcake is actually a fist full of mincemeat hiding under frosting. And that "Dinner-in-a-roll" looks like a growling monster. 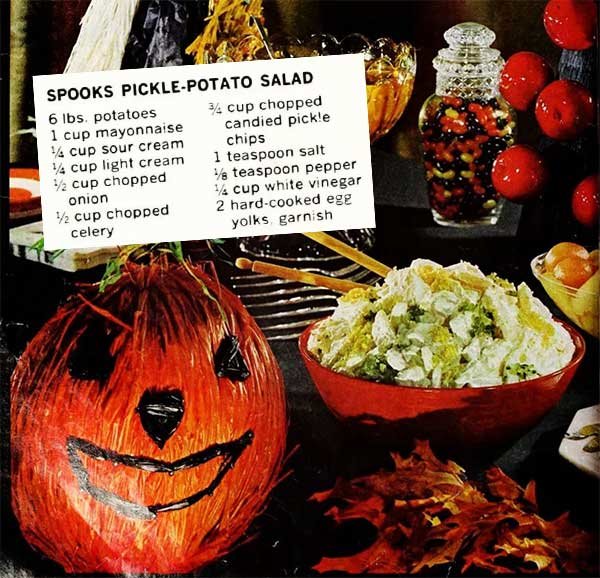 Nothing about this is legitimate. Even the jack-o'-lantern is just a coconut wrapped in cellophane. 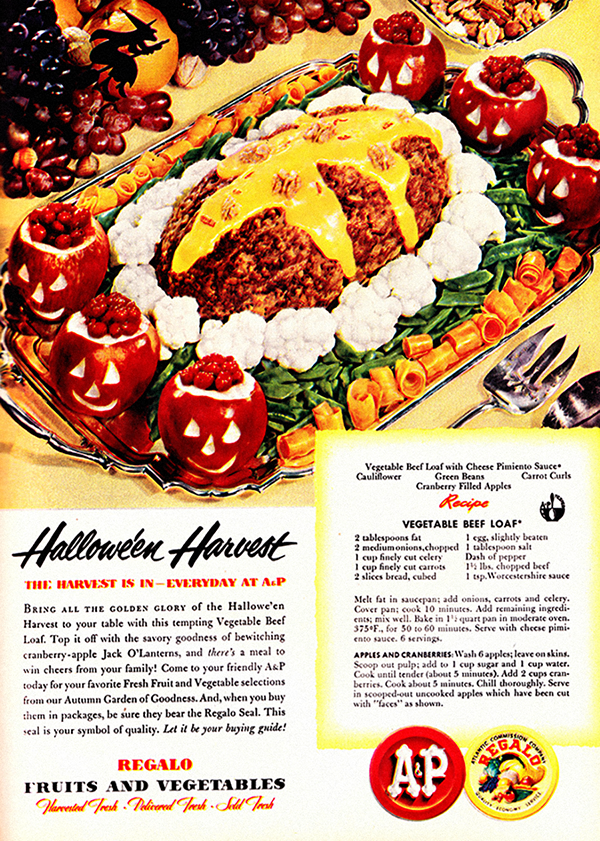 A stack of olive loaf 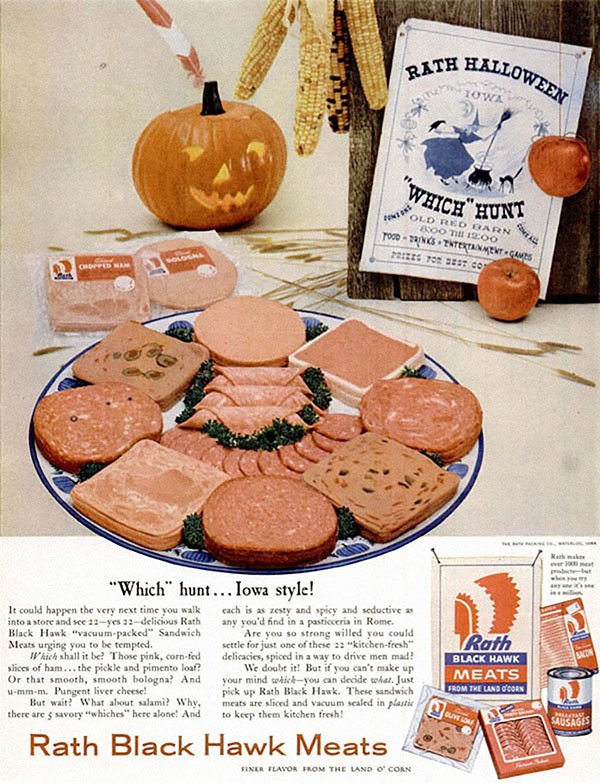 Okay, the raisins are starting to look pretty good compared to some wet slabs of lunch meat. 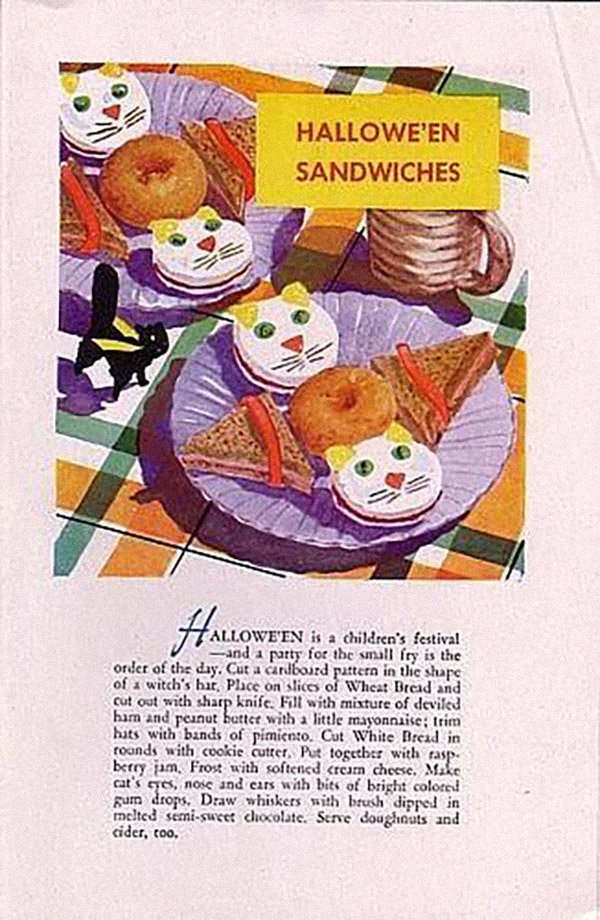 These sandwiches seem cute enough until you read the fine print. Then you realize they are stuffed with deviled ham, peanut butter and mayonnaise. Even if it called deviled ham, it has no place in Devil's Night.

"Skinless" has a horror-film sound to it, doesn't it? What was it with all the piles of processed meats? 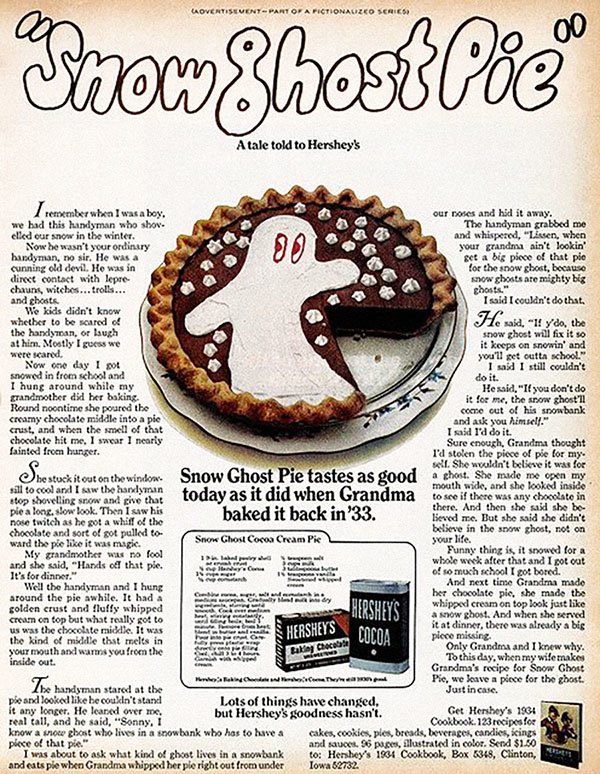 Frankly, this chocolate-and-whipped-cream pie looks rather delicious. But we included it for the bizarre short story printed on the page. It's written from the perspective of a kid whose grandma makes a chocolate pie. A handyman happens to be shoveling the family's driveway. The kid writes, The handyman grabbed me and whispered, "Lissen, when your grandma ain't lookin' get a big piece of that pie for the snow ghost." Just your average charming Hershey's tale about a handyman threatening a kid for dessert. 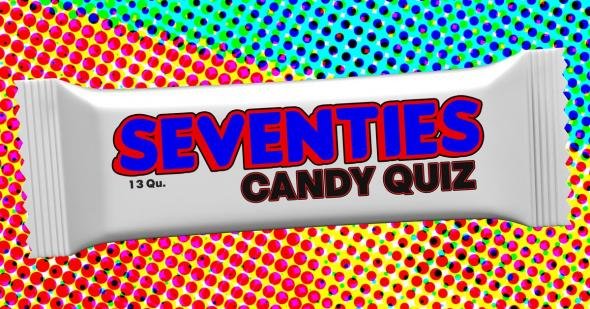 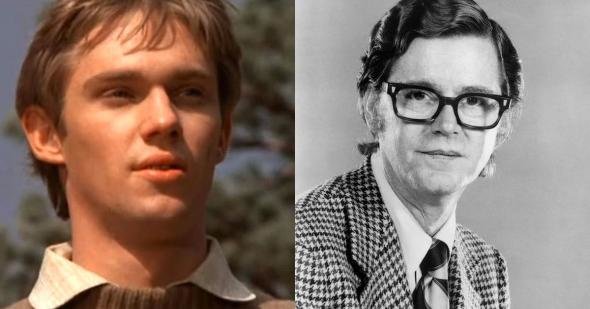 nostalgia
The Brady girls picked out this wallpaper themselves - and their choice caused trouble on set
Are you sure you want to delete this comment?
Close

idkwut2use 2 months ago
Egads...I actually wouldn't mind getting a box of raisins, but some of the others...eesh...o-o
Like Reply Delete

MrsPhilHarris 15 months ago
Actually, I would try most of these.
Like Reply Delete

daDoctah 15 months ago
What do you expect from an era that would actually advertise "Sack O' Sauce in a Can O' Meat"? (Seriously. Google it if you don't believe me.)
Like Reply Delete

dth1971 15 months ago
What about the Ronico Rumkin made with Ronico Rum and orange juice and grenedine?
Like Reply Delete

Pegs 15 months ago
Not a thing wrong with shredded carrots in lime gelatine. Yum!
Like Reply Delete

Pacificsun 15 months ago
The weird recipes are my favorite feature of the MeTV stories!

Just a snapshot in time!

Lantern 15 months ago
This is similar to a book titled "The Gallery of Regrettable Food" by James Lileks. I was laughing my head off reading it. (The guy also has a website.)
Like (2) Reply Delete

Pacificsun Lantern 15 months ago
That's where MeTV gets these stories. The website is hilarious. Wait till the holidays get closer. When there were lots of people making comments (on the Disqus platform) we'd go back and forth discussing these! Too funny!
Like (3) Reply Delete

stephaniestavropoulos Lantern 15 months ago
Pacificsun, I think you are right. I mentioned this several months back, when METV seemed to be doing a "series" of similar stories that was where they were getting them. The photos they used were the exact ones that James used. I also seem to recall some of the "humor" they were using, was something that James had already said.
He also writes a column for the Star-Tribune {Minneapolis}. Before he did that, he did stuff for I think a PBS station. A couple of weeks ago, I ran across on You Tube a "short" that he did, about Reading addicts. {I think it was a PSA to get kids to read more.} It was really well done. Treated, just like one was an alcoholic, or drug addict. "Hello, my name is James Lileks, and I'm a readaholic." {Something like that.} Shows him wondering the streets, begging someone for money. One guy said no, that he'd only spend it on novels. Walking down the street reading and reading, when he is supposed be cutting back. Going through withdrawls. As I said, really well done! The man really is very funny. One final thing: I LOVE G.O.R.F!
Like (1) Reply Delete

Pacificsun Pacificsun 15 months ago
Sorry I jumped to a hasty conclusion. Each picture in the story is credited. And a few from Ladies Home Journal which has it's own archive too.
Like (1) Reply Delete

RobCertSDSCascap Pacificsun 15 months ago
You "jumped to inclusions", as Popeye said. 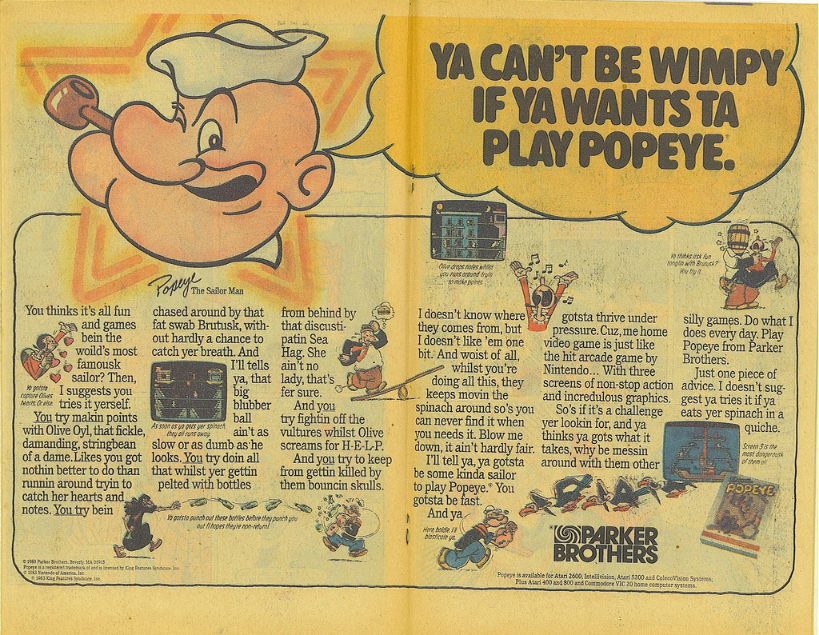