Where To Watch Shop Store Contact
Home / Stories / Is it out of character for Radar to have a tattoo?
Did you know?1970s

Is it out of character for Radar to have a tattoo?

M*A*S*H writers gave Radar a tattoo, then regretted and quietly removed it in a later episode.

"What's that?" Henry Blake asks Radar in the third-season M*A*S*H episode "Check-Up." Radar is getting a routine check-up and there's an awkward scene made out of how uncomfortable he is removing his shirt. Once the shirt comes off, that's when we see an unlikely character choice for innocent, child-like Radar O'Reilly: He's got a tattoo.

"That's my new tattoo," Radar explains. "It's an anchor." Henry protests that Radar isn't in the Navy and the tattoo doesn't suit him. Radar admits he wanted a red cross, but it cost "a buck-fifty." His anchor tattoo was only 50 cents, he says.

You might wonder at this point if this is a real tattoo, but the scene goes on to assure you, it is. Henry scolds Radar that getting that tattoo was "very unsanitary." Then Radar says, "Well I washed my hands first, sir."

He then goofs off a little, flexing his bicep by wiggling his arm at Henry Blake. It seems they want us to see this tattoo as a funny minor detail you'd never guess about one of the show's most earnest characters.

But then in the sixth season, the notion of whether or not Radar is the sort of person who would get tattoos is brought up again. In fact, the entire episode "Images" is centered on Radar wanting to get a tattoo to change his image a little bit as the camp's resident nice guy. 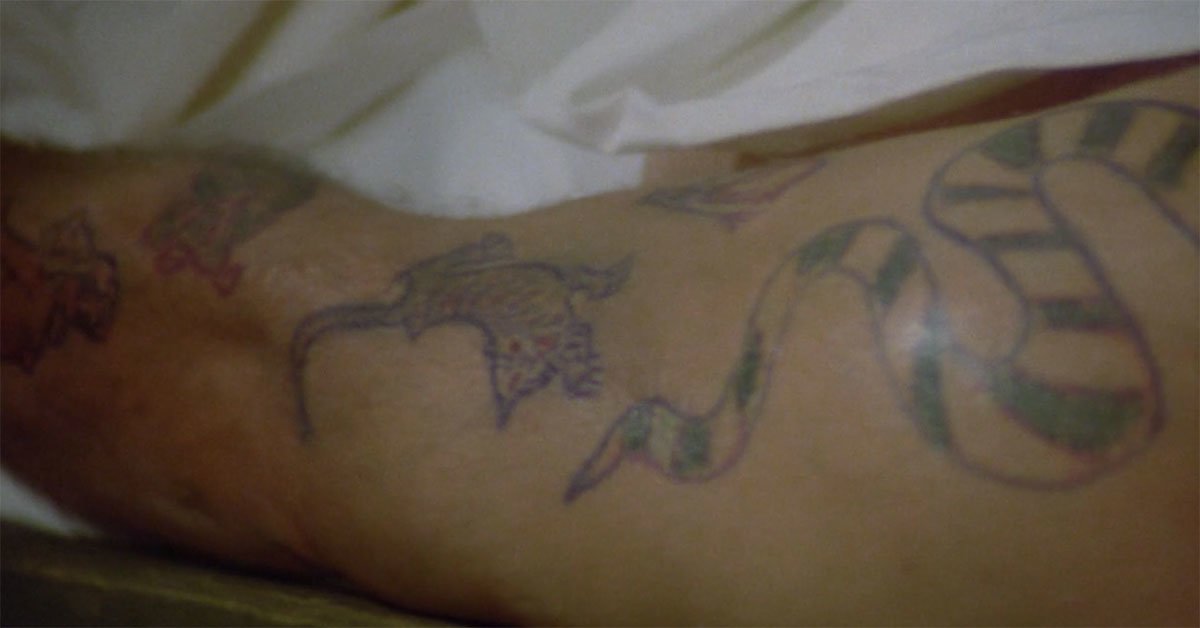 Radar ponders this idea after seeing a patient come in, covered with tattoos. He visits the patient and tells him he's thinking about getting a tattoo after seeing all of the patient's body art, mostly pretty ladies, ferocious felines and fearsome snakes.

The patient insists that Radar not tattoo himself, that he find an artist.

"Smartest move you can make," he tells Radar, before saying he can give "a half a dozen reasons for getting tattooed." He begins to list them: looking tough, feeling great, and grabbing attention of ladies. Radar stops him because he is clearly already sold on the idea.

Later on, the comedy continues in a similar tone to the scene we saw three seasons before where Radar hated taking off his shirt. Well, this time, his tattoo is not on his arm, but on his backside. It's Potter directing Radar to drop his pants, as Hawkeye and B.J. watch. They're all similarly worried as Henry Blake was that Radar's new tattoo might be infected.

His choice in tattoo is not a misfit picture of an anchor, but something much more perfectly Radar: a tiny teddy bear.

Only Radar immediately reveals that he was "afraid of that dirty needle," and he had the artist draw it on instead. It's just ink and will come off, he assures them.

So which is it? Was Radar the sort of person in season three who would get a random tattoo on a lark or is he the guy from season six who wants to look tough but instead chickens out and reveals his inner softness?

Did you know?1970s
Let’s recognize the only extra who committed to selling this dramatic M*A*S*H scene

Music1970sDid you know?
Three Dog Night turned down the M*A*S*H theme song because it was ''too negative''
Are you sure you want to delete this comment?
Close

KathrynJordan 25 months ago
I remember Radar taking to Hawkeye about the Teddy Bear tatoo. There is no way he would get a tatoo without talking with Hawkeye. I sure don't remember Radar getting the anchor tat.
Like Reply Delete

MarkEd KathrynJordan 25 months ago
Yeah, but if you remember, Hawkeye and BJ hired the Marine in Rosie's bar to tell Radar how he regretted getting his, and how one became infected and another gave him hepatitis. Then Klinger walks up, and asks Hawkeye and BJ if they found the guy he set them up with.
Like Reply Delete

StrayCat 25 months ago
I wasn’t unhappy when the Radar character left the show. In the beginning Radar represented what one would expect from the show, a booze swilling, cigar smoking company clerk manipulating the commanding officer and mailing home a jeep one part at a time. Then they replaced this Radar and his martinis with grape NEHI and all the sweetness they could heap on the character. At times he was insufferable.
Like (2) Reply Delete

MarkEd StrayCat 25 months ago
Yeah, they took the realistic Radar, and turned him into a naive virgin.
Like Reply Delete

JKMallaber 25 months ago
I always figured the anchor tat was a fake because of the "washing hands" line.
Like Reply Delete

MeowMeow1962 25 months ago
I remember the teddy bear drawn in marker on his backside but I don't remember the anchor. I'm glad they traded in the anchor for the teddy bear - much more in Radar's character. If I remember correctly, the patient with all the tatts made a comment about him getting hepatitis from a dirty needle and that's what scared Radar into getting a "marker" tattoo.
Like Reply Delete

KathrynJordan MeowMeow1962 25 months ago
I remember that one as well. I don't remember the "anchor" tat.
Like Reply Delete

MrsPhilHarris 25 months ago
I would have thought he would get a tattoo during some drunken furlough and then regretted it.
Like Reply Delete

Josie92 25 months ago
No way would Radar get a Tattoo without talking to Hawkeye first! For me, Radar will always be that young naïve kid Hawkeye took under his wing. Besides, Radar was Hawkeye's go to guy for all things "shenanigan"!
Like (1) Reply Delete

MarkEd Josie92 25 months ago
In the first season, Radar was a poker playing, whiskey drinking, cigar smoking womanizer. The producers had the writers turn him into the innocent little virgin from Iowa.
Like Reply Delete

Josie92 MarkEd 25 months ago
That's right! I completely forgot about that Radar from the original movie rolling into the series. I have the movie but haven't watched it in years. I liked that Radar too! Thanks for reminding me
Like Reply Delete