"There was a lot of affection. But, the place was dull." 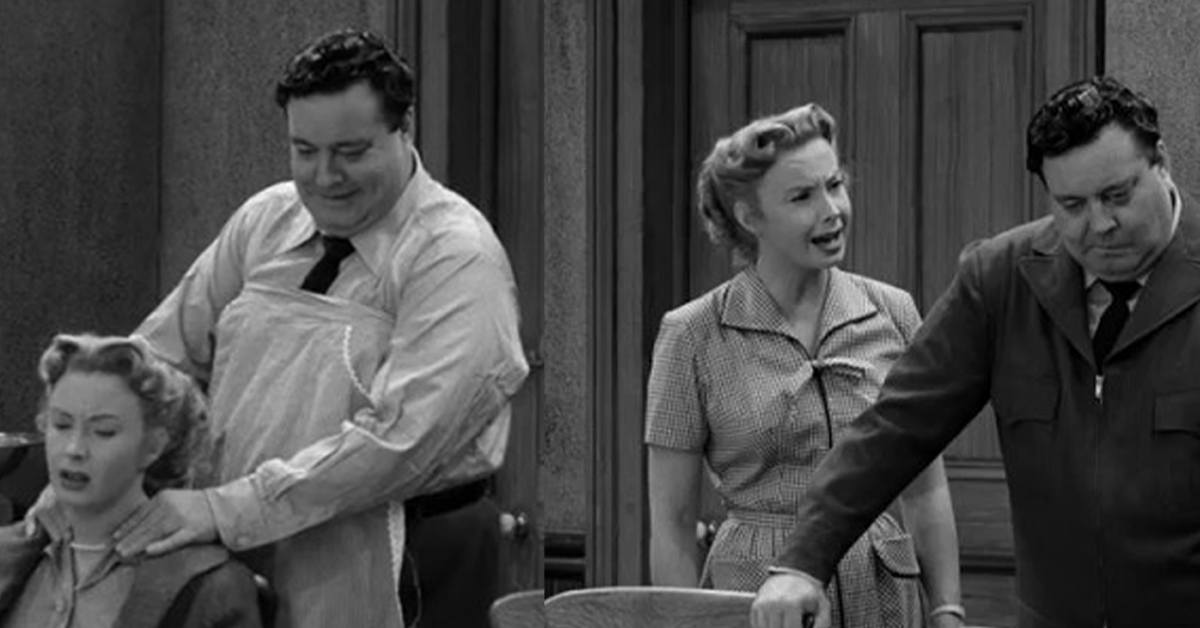 The Honeymooners couple, Ralph and Alice Kramden, were among the first to bicker in a sitcom. Played by Jackie Gleason and Audrey Meadows, the show differed from what viewers usually saw.

The Kramdens didn't have a lovely, small house in a neighborhood where white picket fences surrounded the homes. They lived in an apartment building, had no children and Ralph was a bus driver.

It's common for actors and comedians to use their childhood trauma or growing up in poverty for inspiration and jokes. It's something Jackie Gleason had no shame in doing. In an interview with Morely Safer in 1984, Gleason detailed how growing up in poverty inspired much of his content. He described how the round table and scenery in the Kramden's apartment were almost identical to the apartment he grew up in.

"My mother had to work because my father had left when I was about eight years old," he said. "So, she couldn't take care of [the flat] very well and work at the same time. But, she was a good mother, and everything was pleasant even though it was desultory." 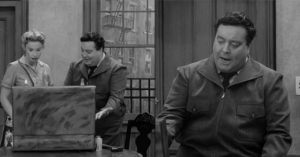 When Safer asked what he meant by "desultory," and if he was trying to say that there was no affection from his mother, Gleason made sure to mention it was the environment that lacked brightness."Oh, there was a lot of affection. But, the place was dull. The bulbs weren't very bright. And, the surroundings, of course, were very bad."

The Kramdens were perfectly crafted by Gleason and other writers of the show. However, the idea of this bickering couple didn't just come out of thin air. "There were a lot of Kramdens in Brooklyn, and almost everyone was a Kramden in this particular neighborhood I lived in," the actor said.

Safer interjected, saying Ralph Kramden was a "pretty lousy" husband, and Gleason disagreed. "Well, no, not really, Marley. When you think of him, the poor soul doesn't have a [lot] of ability. But he keeps trying. He keeps schemes, and the schemes are all to make [him] and Alice happy," he said. "He fails. And when he fails, she feels a great deal of affection."

The character of Ralph Kramden can resonate with a lot of people. In Gleason's words, he's just a regular guy "trying to make it." The actor believes that reruns of the show became even more successful than its debut because it's funny. 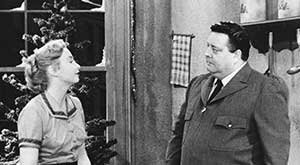 Watch The Honeymooners on MeTV! 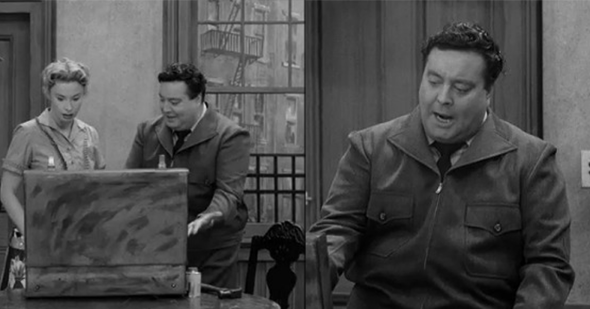 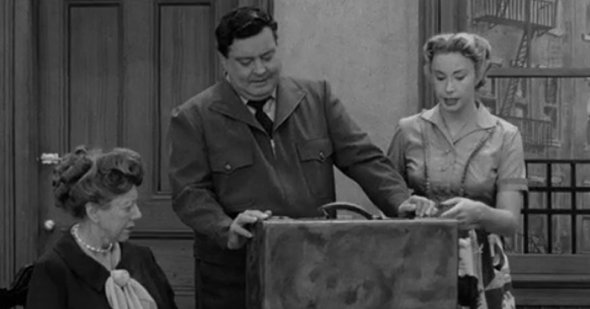 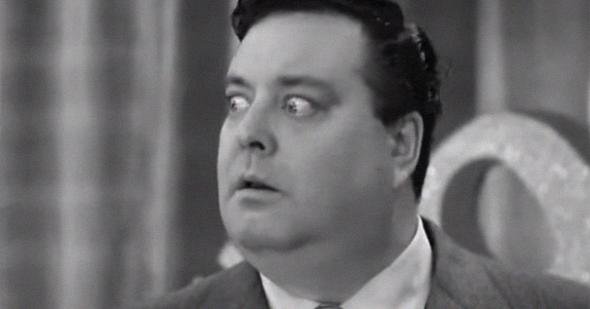 1950s
How well do you remember The Honeymooners' hilarious game show episode?
Are you sure you want to delete this comment?
Close

DanielDoherty 2 months ago
Jackie loved life. Lived life to the fullest, A big heart, big wallet, big waist. He was generous to his tv family and all the schmoes that made that show go. Find me an actor that would do that today
Like Reply Delete

Runeshaper 2 months ago
Jackie Gleason was a GREAT man. Reading the inspiration behind the show only adds to how meaningful it is for me.
Like Reply Delete

hermanstein2015 2 months ago
Easily one of the best shows ever on TV.
Like (2) Reply Delete

MrsPhilHarris 2 months ago
I remember watching the interview with Morely Safer when it originally aired and have watched it a few times in the past few years. What a life!
Like (1) Reply Delete

BrittReid 2 months ago
One was the best shows ever. The characters as portrayed and the writing of the episodes was dead on. Still a regular riot to this day.
Like (2) Reply Delete

WordsmithWorks 2 months ago
Paved the way for Sanford and Son, Roseanne, Malcolm in the Middle, and other pov-coms.
Like (1) Reply Delete

harlow1313 2 months ago
I think Alice's portrayal of her drab life is noteworthy. Imagine how clever women felt trapped by misogynistic society in decades past. As a teenager in the seventies, my mates and I loved The Mooners.
Like (3) Reply Delete

Pacificsun 2 months ago
Again, it's situational comedy. Actually it wouldn't be funny at all if it weren't for the comedic schemes, like we watched in ILL. The improbability of succeeding against the odds. The spirit of the impoverished trying to prevail against the impossible odds of established affluence..

Gleason had some funny "bits" he used. Mainly his facial reactions and gestures and physicality. Last night's episode featured Ed's (Art Carney) character supposedly eligible for an influential position in Ralph's Bus Company. And promising to treat him right if he was in management. It was so ridiculous that Ralph takes as much as he can tolerate from all the nonsense. And then the audience can surely identify with his impatience by throwing him out the door. So the series was very much based on the comedic timing between the two of them.

Affection? Perhaps by redeeming itself at the very end. But hardly substantial. But I've read comments condemning the perceived spousal abuse. Audrey Meadows as "Alice" happened to be a strong enough personality, forgiving and supportive. But I wonder how many spouses would actually take all the improbable nonsense.

It was a very unique series, moving to the opposite end of the end of their contemporary sitcoms of the day. But hardly inspiring and escapist. Am sure that was gifted Jackie Gleason's intention, as depicted in the well-written story above.
Like Reply Delete

harlow1313 Pacificsun 2 months ago
For me, it is the characters that drove this show. I see the plots more as vehicles, but I suppose that is true for many shows. Anyway, we loved and often quoted this series as teenagers.
Like (1) Reply Delete

WilliamJorns Pacificsun 2 months ago
Plus, we only saw Ralph yell at Alice. He never actually hit her. When he said stuff like, "How'd you like to go to the moon, Alice?" or, "Bang! ZOOM!" while shaking his fist, Ralph was only letting off a little steam. He really loved Alice; and we all saw that at the end of mutiple episodes where he took her in his arms and said, "Baby, you're the greatest!", right before giving her a passionate kiss.
Like Reply Delete

Pacificsun harlow1313 2 months ago
In a way, perhaps. But those were the times. 1955. Regular people didn't make much money because things didn't cost much money. And goods weren't as available as they are today. My dad had a very decent job in an affluent industry. Maybe like $62 a week. But rent was $30 a month. People only had 1 car, small closets for their wardrobes, and on it goes. Of course reality in Brooklyn, NY was far different than on the West Coast, plenty of space, affordable new builds and opportunity. I think the point of the story was Gleason's reality growing up. Their dwelling looked drab being in black and white, a walk up apartment building, and few furnishings. But not like the "poor" of today because it's all relative regarding so many variables.
Like (2) Reply Delete

harlow1313 Pacificsun 2 months ago
It is the tone it is delivered in, not the dollar amount.
Like Reply Delete

BrittReid Barry22 2 months ago
You're salary couldn't drip out!
Like (1) Reply Delete