The instant chemistry of Rob and Laura Petrie, as explained by Dick Van Dyke and Mary Tyler Moore

Her: "He was so good-looking." Him: "We just had something going." 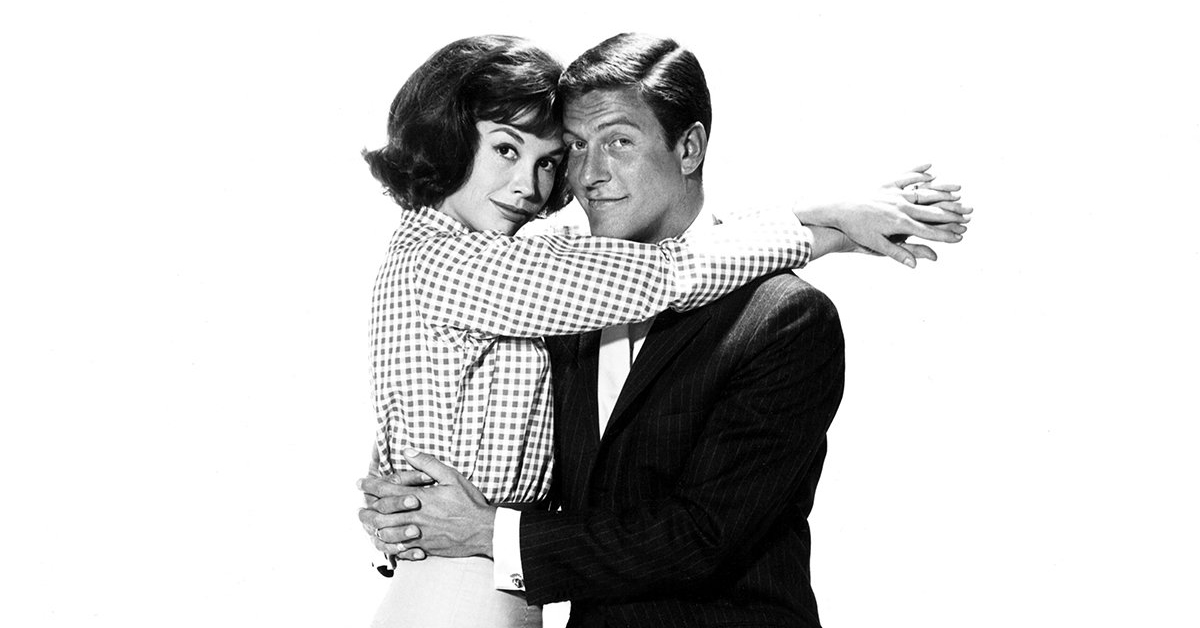 The first time we see Rob and Laura Petrie onscreen together, it's about six minutes into "The Sick Boy and the Sitter," the first official episode of The Dick Van Dyke Show. "Hi, honey," Rob calls, finding Laura in the kitchen and giving her a quick kiss before asking, "How's your white satin evening gown?" Laura replies, "Fine, how's your red flannel bathrobe?" Rob makes a face while his lady's joke lands, then Laura laughs, "What kinda greeting is that?"

Well, it's the kind of greeting you give when it turns out you're about to become one of TV's most beloved couples. Like the Ricardos before them, the Petries had their own dynamic, built on a mix of affectionate sweetness and hilarious physical humor. And according to both stars Dick Van Dyke and Mary Tyler Moore, this chemistry between the characters took hardly any work at all. Both insisted instead it was instantaneous.

Moore told the Archive of American Television: "He’s a nice guy, I think I’m a nice lady, and we just liked each other right from the beginning." Van Dyke sounded similar in his own interview: "You could see the beginnings of it, because by the time the week was up and we were in front of the audience, we knew we just had something going.” In fact, Van Dyke goes even further, saying, "It was one of the few times in my life I said, ‘This is very good.’"

"Very good," it was, so much so that the original character Carl Reiner had written for himself in Rob Petrie got tossed out the window as the series creator started slanting his scripts to really help his actors sing in their parts as each half of a married couple. When asked how much of himself he ended up putting into the part of Rob, Van Dyke remembered, "Practically all of me. It was nothing like the character that Carl wrote for himself or that he played in that pilot. To me, Carl Reiner’s greatest talent was writing to people's strengths. We didn’t have to act. He had such an ear for our inflections and our speech patterns, and he wrote them down on paper, so all we had to do was read. Everyone played themselves, including Mary. And it was just that easy and that simple.”

It probably helped that Moore said she was a huge fan of Reiner's (Moore siad, "It was my hero Carl Reiner who was the writer/producer of the show") as well as Van Dyke's. In fact, before she got cast on the show, she remembered playing all the songs from Van Dyke's hugely successful musical Bye Bye Birdie "endlessly." Moore explained why she was so impressed with Van Dyke:

Can you name these TV stars who appeared on The Dick Van Dyke Show?

"He was a dancer, self-taught. And he was so good-looking. There was just right away a sense of being very happy, very safe in the talent that he shared with me and very comfortable in the humor that we shared and an appreciation for each other’s gifts.”

Van Dyke agreed with his costar, who he commended as an incredibly quick learner: "It was just fascinating to watch Mary Tyler Moore grasp it, just grasp it so quickly. Right from the beginning, she saw what was happening and played off me.”

In the end, Moore beat out what she claimed was 75 other girls to get the part of Laura Petrie, and it only took a tiny fib about her age to land the role. She was born in 1936 and Van Dyke in 1925, and back in the late 1950s and early 1960s, a 10-year age difference between husband and wife was not common, especially not on TV. So she aged herself a year to get within that 10-year window, and every fan of Rob and Laura Petrie has been grateful ever since. Moore described the feeling she got after her final audition: "Afterwards, I just had this pretty sure feeling that everybody was pleased. And that I was in fact possibly now on my way.”

Did you know?Nostalgia
7 household hacks from vintage cards that still work

nostalgia1970s
Dick Van Dyke’s forgotten variety show found the ''perfect way'' to introduce general audiences to Andy Kaufman
Are you sure you want to delete this comment?
Close

cmurf1960 6 months ago
I read someplace that when they were doing "The Mary Tyler Moore Show", they had, at first, wanted to make Mary Richards a divorcee. But fans still thought of her as Laura Petrie, and the showrunners were afraid that people might think that Rob and Laura had gotten a divorce. So, they decided to make Mary's character as a single, never married woman who was engaged, but jilted by her fiance. That made Mary Richards different enough from Laura Petrie for the fans to accept her as a new character.

Also, in 1970, divorce was still kind of taboo on TV. So, when a TV show depicted a single parent, that parent was always said to be widowed. If the character was not a parent, they were depicted as never having been married at all.
Like Reply Delete

vinman63 cmurf1960 5 months ago
She looked older on the Dick Van Dyke show.
Like Reply Delete

MadMadMadWorld vinman63 3 months ago
Hard to look old at only 24 (on Dec. 29, 1960) before she filmed the pilot on Fri. Jan. 20, 1961. That date was the inauguration of President Kennedy. It is uncanny how similarly superb looking Dick and Mary were, just as were John and Jackie Kennedy. Those first two years of the series were so special (1961/62, 1962/63) with the publicity The Dick Van Dyke Show got on the growing comedy skill of Mary along with the other top-notch actors, writers, and producers. I don't believe there has ever been any series with all the areas mentioned in creating it as outstanding in ability as The Dick Van Dyke Show! And it all starts with maybe the greatest comedy writer in television history: Carl Reiner. He wrote over 20 episode scripts before the series was even financed and given the green light, believing himself would be starring as Rob Petrie!
Like Reply Delete

ScoobyDoo169 7 months ago
I love that they got so along together. I think it is so funny that she lied about her age, I guess that's where they got the idea for that one episode where she lied about her age when they got married. I'm glad they just played theirself. I think the most successful shows and movies are those where the actors are really like their character in real life. It brings so much more creativity, reality, fun, happiness, and greatness to the screen.
Like Reply Delete

ScoobyDoo169 ScoobyDoo169 7 months ago
I meant helps, much, to, and on.😂
Like Reply Delete