It scored high ratings and showed that audiences were ready to see a new side of the beloved actor.

In the 1950s, Andy Griffith was a favorite late night show guest performing his brand of southern-fried humor. He soon won roles in movies like A Face in the Crowd and No Time for Sergeants.

Danny Thomas cast Griffith as Mayberry sheriff Andy Taylor in a seventh season episode of The Danny Thomas Show in early 1960 and by that fall, The Andy Griffith Show was born. The small-town sitcom would go on to be one of television’s most beloved programs, still entertaining millions of fans to this day.

But the more popular a first show is, the harder it can be for a lead actor to repeat that success. Audiences only see them as one character and attempts to do less conventional work can be met with resistance.

When Andy Griffith left Mayberry behind, he went into darker, but still funny, territory with the short-lived prep-school series Headmaster. The failure of that series morphed into The New Andy Griffith Show which didn’t fare much better.

After these two ratings flops, Griffith stuck mostly to guest starring roles in shows like The Mod Squad, Hawaii Five-O and Here’s Lucy. He also appeared in many acclaimed miniseries during the late 1970s like Washington: Behind Closed Doors, Centennial and From Here to Eternity. 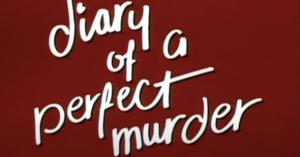 5 ways the 'Matlock' pilot is different from the series

In 1979, he headlined another sadly short-lived show about a space-traveling junkman called Salvage 1. It seemed as if Griffith’s only long-lasting success on television would be his time in Mayberry, even if he had a lot more to give.

Griffith continued to make special appearances on shows like Fantasy Island and The Love Boat, and even had a cameo on Saturday Night Live when Ron Howard hosted in 1982. He also starred in many TV movies.

One of those movies from March 1986 was called Diary of a Perfect Murder. Griffith starred as a defense attorney who joins his daughter, Charlene, in Atlanta to defend a famous TV reporter charged with murder. They enlist the help of investigator Tyler Hudson, much to the chagrin of police lieutenant Frank Daniels. And, of course, Griffith’s character was named Ben Matlock.

The movie was a resounding success with both critics and audiences. Andy Griffith was the perfect person to play the clever and theatrical lawyer, a part very different from Sheriff Andy but still full of Griffith’s trademark charm. He even said it was the best role he ever played on TV. Sixties stars returning to TV courtrooms was becoming a theme – Raymond Burr had just brought back Perry Mason the year before and would star in over 20 TV movies as the iconic attorney stretching into the Nineties.

Just like the introduction of Mayberry on The Danny Thomas Show before The Andy Griffith Show debuted in October 1960, Diary of a Perfect Murder led to the debut of Matlock in the fall of 1986. It was the start of nine successful seasons for the classic court drama. 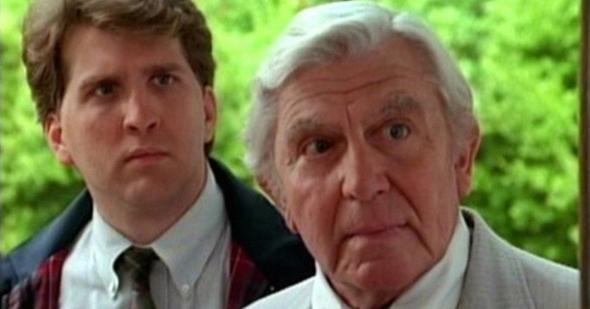 Daniel Roebuck finally felt like a star on Matlock 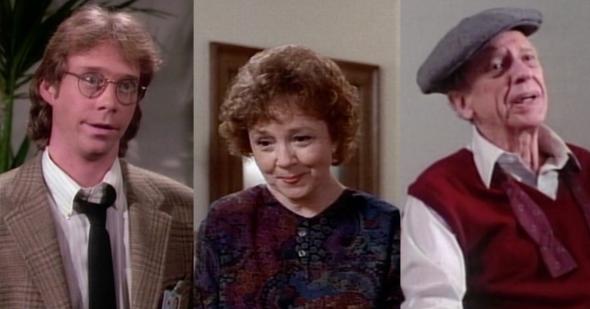 Can you name all these Sixties stars in Matlock? 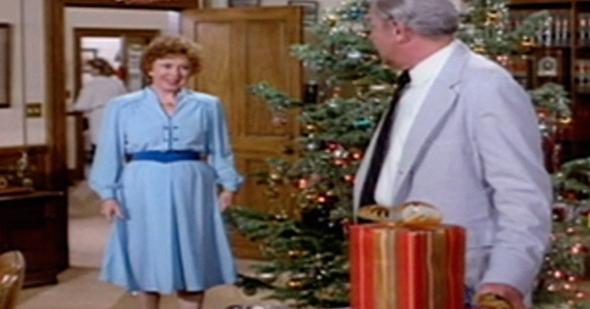 Did you know?
Betty Lynn's last appearance on Matlock came in this Christmas episode
Are you sure you want to delete this comment?
Close

lauramushkat 5 months ago
love this and the Andy Griffith show. as much as I enjoy both on a daily basis, now that I am a senior citizen, I seem to enjoy all the repeats of Matlock!
Like Reply Delete

MichaelFields 6 months ago
I remember the show Salvage 1, it was one of my favorites and I was sad to see it go, and am still looking out to try and find reruns of it
Like (1) Reply Delete

Michael 6 months ago
And the first episode of Matlock is on today, Thursday May 12 at 10am eastern.
Like Reply Delete

Michael SusanWilkinson 6 months ago
I somehow never saw it. But the description made it sound intriguing.

I have a DVD copy of "Go Ask Alice", and I'm pretty sure it has Andy Griffith's name prominently on the cover. I looked at imdb, Ithink his role is minor, but it's a selling point.
Like Reply Delete

Runeshaper 6 months ago
Matlock was GREAT! I remember watching the show with my grandmother (-:
Like (1) Reply Delete

denny 6 months ago
Salvage 1 is on YouTube, really liked the show. Andy was great in Murder in Cowetta County, He tried to get away from the small town sheriff character in Pray for the Wildcats and Savages in the 70s. Both great tv movies.
Like (2) Reply Delete

rstuv 6 months ago
Referring to my earlier post, I would like to thank those who responded. To bbaorbb, I did contact the AVS forum, and to LoveMETV22, I will look into the streaming service.

However, I found that MeTV has some detailed instructions regarding rescanning (metv.com/rescan) which I will try first. There's a little more to it than I thought.

This will be my last post on the subject, since it is off-topic. (Apologies to the Matlock fans). For any other responses that might come, thanks in advance.
Like Reply Delete

rstuv 7 months ago
This is off-topic, but I feel I have to say it somewhere. I live in the Washington DC area, where MeTV was moved from channel 5.3 (it's home for five years) to 48.1 on Monday. Well, the signal is so poor that for all practical purposes I have lost MeTV. Adjusting my antenna doesn't do anything, and I don't get cable, so that's not an option. If anyone has any good suggestions, please offer them. It was great while it lasted.
Like Reply Delete
Load previous comments
LoveMETV22 Michael 6 months ago
I wish the Cable/Satellite companies adopted the Digital Sub-Channel mind set. It seems to be an OTA offering. As both systems seem to have their advantages and dis-advantages.
Like Reply Delete

rstuv 6 months ago
Have u tried getting a new antenna with a booster?
Like (1) Reply Delete

rstuv 6 months ago
No. I found rescan instructions at metv.com/rescan and did it their way. Problem solved.
Like Reply Delete

amyd rstuv 6 months ago
I agree. It WAS good and relaxing but unfortunately its gone for antenna users in the DC area. And METV will not respond to emails - even when I put in the subject "PLEASE READ" - they just send rescanning instructions. I have rescanned and rescanned, used 2 different antennas including a 150 mile amplified rotating antenna and 2 different TVs that can easily pick up Baltimore and beyond plus all the local stations. I burned out one rotating motor trying to get MeTV on 48.1 - "No Signal". I give up. I now watch GET TV. GRIT, and Antenna TV and also got a Roku. They really blew it this time - they did a stupid thing doing this. Maybe they'll figure it out if they track viewers and see that so many have dropped off and no antenna users in DC - unless they're beside the broadcast tower - which incidentally I also asked for the location and coordinates. But I doubt they'll figure it out if they won't even read their customer's technical issues emails. I am disgusted but I must say Thanks for posting the issue. I wish I had known this before I ruined one rotating motor on my antenna. I think we're now living in the decade of stupid and lazy. So long MeTV.... My suggestion is try out some other stations and the free stations on Roku. Thanks again for your post. I appreciate it.
Like Reply Delete

Andybandit 7 months ago
Matlock was a good show. Glad it was successful for 9 seasons.
Like (2) Reply Delete

CaptainDunsel 7 months ago
Between "The New Andy Griffith Show" (1971) and "Salvage 1" (1979) there was the even more ill-fated "Winter Kill" (1974) and "Adams of Eagle Lake" (1975)
The premise of Andy as the sheriff in a mountain resort community was taken from WK and adjusted into AoEL.
Contrary to most reports, the series was not cancelled after only two episodes. Rather, Andy Griffith and the network (ABC) parted ways over "creative differences" before even one episode aired. The two episodes which were completed were aired as special presentations, and did quite well in the ratings. But the project was never revived.
Like (2) Reply Delete

denny CaptainDunsel 6 months ago
I liked those, TBS use to show them. I watched The Girl in the Empty Grave recently.
Like (1) Reply Delete

CaptainDunsel denny 6 months ago
One can debate whether "Winter Kill", "Adams of Eagle Lake", "The Girl in the Empty Grave" and "Deadly Game" are all of a piece or not. They certainly all have Andy Griffith as the start, playing a lawman (2 as Sheriff and 2 as Police Chief).
The whole chain starts though, with the 1972 James Garner film "They Only Kill Their Masters". Garner played "Abel Marsh", as did Griffith in TGITEG and DG. WK (and by extension AoEL) is often cited as having been "inspired" by TOKTM. Interestingly, Lane Slate, the writer of TOKTM, is credited on all *except* WK.
I guess it all just goes to show that, in Hollywood, no concept is every truly unique, nor does one ever really die. They just get ground up, mixed together, extruded in new tubes and sent out as "New and IMPROVED"!
Like (1) Reply Delete

Or drag a file here to upload
LoveMETV22 7 months ago
Wonder what they did with the story the posted yesterday right when " Collectors Call " came on?

It was a good story. Hope they repost it.
Like Reply Delete

MrsPhilHarris LoveMETV22 7 months ago
In Schedule in Collector’s Corner, if you scroll down to gallery there is something about Allen M.
Like Reply Delete

Pacificsun LoveMETV22 7 months ago
Do you think they thought it was too close to the existing one about her? (Sept 2020). Could there have been a competition between authors?

https://www.metv.com/collectorscall/collection/viewer-collection-allen-machielsons-doctor-who-haven
Like Reply Delete
LoveMETV22 Pacificsun 6 months ago
I don't know. The story popped up right as Collectors call came on. thought it odd as they don't usually post stories on Sundays. I'm guessing they probably just had it auto-post. Then yesterday they removed it. I can see posting it before, even as or when the show is on the air or shortly after. If they repost it to long after it loses significance.
Like Reply Delete
LoveMETV22 Pacificsun 6 months ago
I did see that story before. It's interesting that they do the separate page for Collectors Call, Toon In With Me and Svengoolie. Makes sense because they are host related.
Like Reply Delete

Michael LoveMETV22 6 months ago
It came "late" in the day, I'm not sure I saw it until the next day. You're right, unless someone dies, no stories on Sundays. I assumed it was posted as a teaser to Sunday's episode, though typically no "this is on tonight".

It kind of lost its value once the episode aired.