Randall is tasked with bringing Santa Claus to a young boy.

The gang all gets jobs at the mall during the holiday season!

The gang all gets jobs at the mall during the holiday season!

The family takes a vacation to King's Island!

Beaver gets spooked by a mysterious car outside his house!

See the only episode of Perry Mason to ever air in color!

MeTV network is available locally on Rochester, NY affiliate WHEC on channel 10.2. If this isn’t the way you watch, click here to see Where to Watch

5:30am
Petticoat Junction
Visit From The Governor (s2, ep22)
Uncle Joe is disappointed when no one seems to support his proposal to invite the state governor for a visit in Hooterville.

6:00am
The Beverly Hillbillies
The Trotting Horse (s4, ep17)
Granny needs to get around Beverly Hills and is having no luck with a driving lesson. When she hears that the Drysdale are looking at the horses, Granny decides she needs a trotter and buggy. Drysdale learns that the Clampetts want a horse, and after he learns of its potential winnings, the Clampetts acquire Ladybelle, a racehorse.

6:30am
The Beverly Hillbillies
The Buggy (s4, ep18)
Granny gets a buggy for her horse Ladybelle and gets the same thing for Mrs. Drysdale so they can have buggy races. But the horse she buys for her neighbor is known around the stables as "Old Gluepot." She tries to cheat to win, but ends up with Lightening, the poor horse, after Jed tries to teach her a lesson.

7:00am
Popeye and Pink Panther's Party
Sink Pink, Say Cheese, Please, Cirrhosis Of The Louvre, Come On In! The Water's Pink!, For Better Or Nurse, Fleets Of Stren’th, The Two-alarm Fire
"A big-game hunter tries to catch the Pink Panther for his wife., Ratfink demands to be cast as "the hero" in a Hollywood movie -- with Roland as his stand-in., A shape-shifting criminal known as The Blotch threatens to steal paintings from the Louvre museum., The Pink Panther visits Biceps Beach., When Olive takes a job as a nurse in a hospital, Popeye and Bluto try to impress her., Popeye takes on the enemy fleet, including an aircraft carrier and planes., Bluto and Popeye, rival volunteer firemen, answer an alarm at Olive Oyl's house."

8:00am
The Tom and Jerry Show
Cat And Duplicat, Half Pint Palamino, Life With Tom, Farm Of Tomorrow, Trap Happy, Mouse Into Space, Two Little Indians
"Jerry is the victim of Tom and another cat but at first neither realizes that there is another cat, they think they are each other's reflection., A millionaire puts up a large prize for the capture of the smallest horse in the world and Barnery Bear is given the task., Tom reads Jerry's bestselling book, "Life with Tom" and experiences some flashbacks., A humorous showing of how much more productive farms would be if farmers started crossbreeding their animals., Tom hires an exterminator, another cat, to get rid of Jerry., Tom and Jerry bring their chasing and fighting out to space., Jerry has his hands full trying to keep two orphan mice out of trouble and away from Tom."

9:00am
Bugs Bunny and Friends
Fast And Furry-ous (1949), Mother Was A Rooster (1962), Hurdy-gurdy Hare (1950), Portrait Of The Artist As A Young Bunny, Too Hop To Handle (1956), Tweet And Lovely (1959), Bushy Hare
"Wile E. Coyote makes 11 disastrous attempts to catch the Roadrunner. , The barnyard dog steals an ostrich egg and places it by Foggy. When Foggy wakes up, he thinks he has laid a huge egg , Bugs, the entrepreneurial bunny, reads a classified ad and decides to go into the music business. , In this cartoon ode to great literature, Bugs recalls his youth with Elmer Fudd. , Sylvester and Junior mistake an escaped baby kangaroo, Hippetty Hopper, for a giant mouse. , Sylvester wants to catch Tweety, but one thing stands in his way: Spike, the bulldog. , After drifting far out to sea while holding on to a bunch of balloons, Bugs Bunny is rescued by a passing stork -- only to be delivered into a mother kangaroo's pouch."

10:00am
Maverick
Point Blank (s1, ep2)
Bret meets a delightful and cunning girl named Molly Gleason. Within minutes, she makes plans for his future: a permanent plot on Boot Hill.

11:00am
Wagon Train
The Charles Maury Story (s1, ep32)
Adams becomes suspicious of a soldier who's supposedly providing protection for the wagon train from bandits.

12:00pm
The Big Valley
Price Of Victory (s2, ep22)
Heath tricks Nick into becoming a sparring partner to a professional boxer. When nick knocks him down by a fluke, it is discovered that the boxer has a blind side caused by a blood clot. Nick offers him a job on the ranch, but when the boxer insists on re-entering the ring, Nick becomes his manager for one last fight.

1:00pm
Gunsmoke
The Miracle Man (s14, ep10)
Con man Bob Sullivan tries to swindle a widow with the tale of a fake cattle herd, but instead ends up falling in love with her and her children. 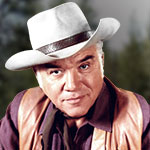 On Now
Bonanza
The Running Man (s10, ep26)
When Candy receives an urgent letter from an old flame requesting his help in the town of Butlerville, he and Joe ride out and find that an old friend is part of the problem. 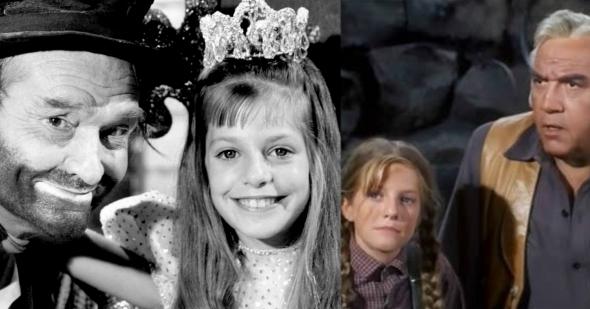 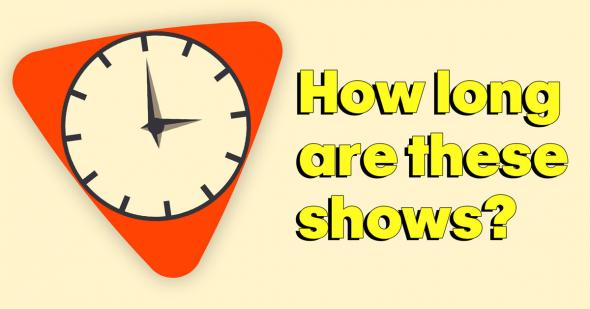 Are these shows a half hour or an hour… or both? 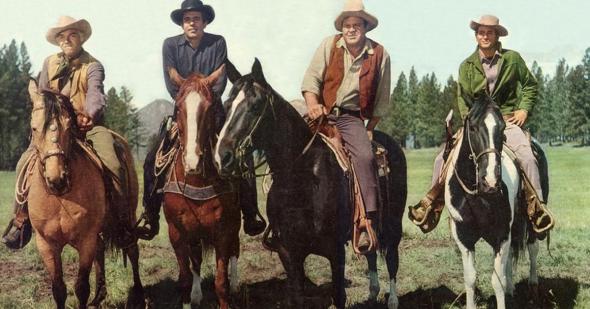 The most horrifying behind-the-scenes Bonanza rumor is based on a true unsolved crime
3:00pm
Remind Me
Rawhide
Lost Herd (s7, ep4)
Favor loses nearly the entire herd when taking a shortcut through Devil's Patch Quilt. He was trying to beat another herd in, and now must explain himself to Mr. Teisner of the cattleman's association.

5:00pm
Remind Me
The Rifleman
Deadly Image (s4, ep22)
On the trail Len Richards and his brother, Ab, confront a Lucas McCain look-alike, Earl Bantry and his sidekick K.C. Peters, for slaughtering one of Richards' steers. Bantry kills Ab Richards, and Len wants Micah to arrest Lucas for the murder. More problems ensue because of this "evil twin."

5:30pm
Remind Me
The Rifleman
The Debt (s4, ep23)
Lucas and Mark stop on the way to the county fair to deliver a message to Micah, who is on the trail escorting a prisoner scheduled to be hanged. Mark and Lucas recognize the prisoner, Mr. Renolds, as someone who saved Mark's life from a snake bite a few years back.

6:00pm
Remind Me
The Three Stooges
Whoops I'm An Indian, Oily To Bed, Oily To Rise, Out West, Idiots Deluxe, Dopey Dicks, Three Dark Horses
"Moe is on trial for assaulting Curly and Larry with an ax. Moe relates how Curly and Larry took him on a hunting trip for his nerves. Out in the woods they confronted a bear, which Curly and Larry stunned, and thinking it was dead, threw it in the back of their car, where it came awake, tossed Moe out and drove the car into a tree. The judge finds Moe not guilty and Moe promptly goes after Larry and Curly again with the ax. "

8:00pm
Remind Me
Svengoolie
Fiend Without A Face
"Invisible atomic monsters attack a U.S. Armed Forces base and the local residents."

10:00pm
Remind Me
Star Trek
Friday's Child (s2, ep11)
Kirk, Spock and McCoy land on a primitive planet to negotiate a mining treaty, but soon find themselves involved with intrigue and must flee with a pregnant woman into the surrounding mountains.

11:00pm
Remind Me
Buck Rogers in the 25th Century
Mark Of The Saurian (s2, ep6)
While suffering from an alien fever, Buck fears that an ambassador and his entourage are really reptilian beings in human guise.

12:00am
Remind Me
Kolchak: The Night Stalker
Demon In Lace (s1, ep16)
An evil succubus from ancient Mesopotamia murders young men to maintain her immortality.

1:00am
Remind Me
Lost in Space
Mutiny In Space (s2, ep19)
Dr. Smith finds an alien ship and wants to use it to get back to Earth, but he doesn't count on the owner of the ship, Admiral Zahik, turning up and wrecking his plans.

2:00am
Remind Me
Voyage to the Bottom of the Sea
The Terrible Toys (s3, ep5)
Aliens aboard a UFO rig six windup toys in an effort to destroy the Seaview.

3:00am
Remind Me
Land of the Giants
Rescue (s1, ep23)
The Earthlings inadvertently cause a cave-in that traps two giant children, and Steve and Dan volunteer their services to Kobick to help rescue the children.

Series finale!
4:00am
Remind Me
The Time Tunnel
Town Of Terror (s1, ep30)
Tony and Doug are propelled into the future (1978) to fight invaders siphoning off the Earth's oxygen.