America’s #1 Classic Television Network
Find your local MeTV station
Where to watch
See when your favorite shows are on
See schedule
Personalize MeTV.com to follow your favorite shows
Free sign-up
Shop your favorite shows in the MeTV Store
Shop Now
Home / Stories / There's an athletic and mysterious reason Mike Connors was once billed as ''Touch Connors''
Did you know?

The Mannix star earned his early screen name on the basketball court. 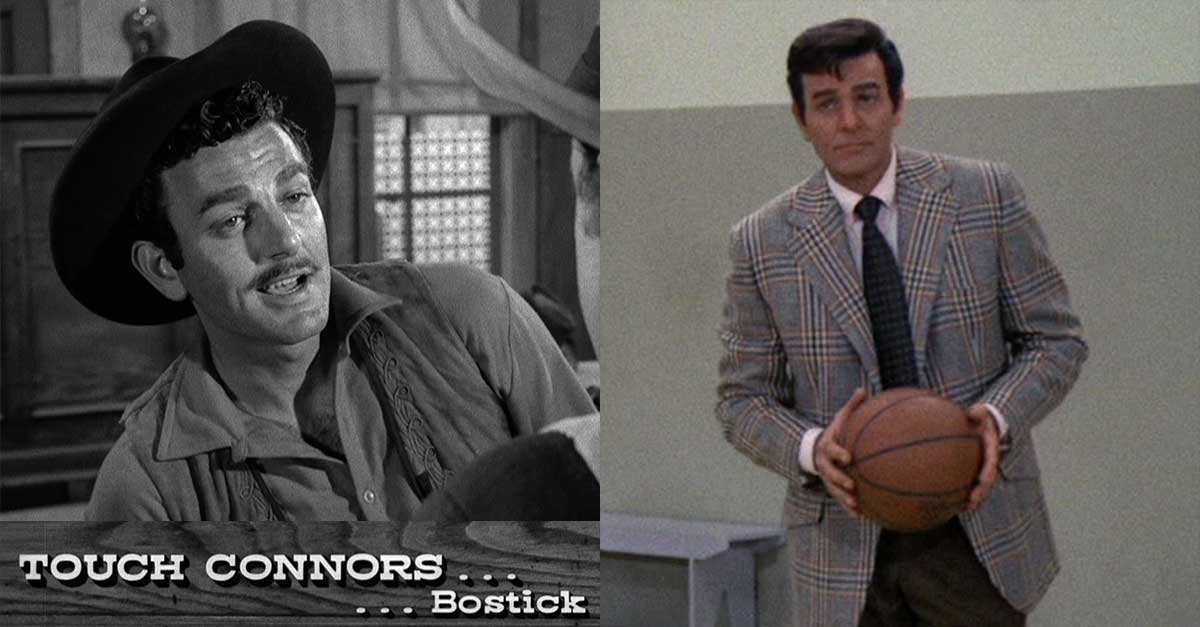 Let's say you're watching an early episode of Gunsmoke, one of the half-hour ones. You spot a familiar face, albeit one disguised behind a marvelous mustache. "Hey, I think that's Mike Connors," you say to the loved one on the other end of the couch. You wait until the closing credits roll to confirm.

His real name was neither. Connors was born Krekor Ohanian in Fresno, California. Classmates picked on Ohanian in high school, mocking him for his Armenian background. "There wasn't a week that went by that I didn't fight in school," Connors said years later in an interview, according to TCM. "People looked upon us as outsiders." He took his battles to the basketball court. 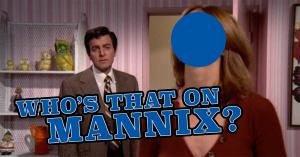 When American joined World War II, Ohanian joined the U.S. Army Air Forces. After the war, he returned to his studies and his balling. Ohanian enrolled at UCLA. There, he would cross paths with a college basketball coaching legend and get his big break on the hardwood.

“My sophomore year, I played basketball during John Wooden’s first year,” Connors recalled late in his life in an interview with the online column Party Favors. That would have been the 1948–49 season for the Bruins.

As Connors told the tale, he happened to be playing on the court when Hollywood big-wig William Wellman, who directed the first film ever win the Academy Award for Best Picture, sat in the stands. Wellman approached the coach and asked if that handsome Ohanian kid ever thought about working in pictures.

After honing his skills in the UCLA drama department, Ohanian signed to the Famous Artist Agency, where he was handled by agent Henry Wilson. Wilson had a knack for coming up with masculine, sporty, monosyllabic stage names. He was the guy who dreamt up the monikers for Rock Hudson (Roy Scherer), Tab Hunter (Arthur Kelm) and Race Gentry (John Papiro).

Wilson asked Ohanian if he had any nicknames. The aspiring actor explained that his teammates had dubbed him "Touch," due to his soft touch with the basketball. Thus, "Touch Connors" was born.

"I hated it from day one," Connors told Party Favors. Nevertheless, he worked under the name for half a decade. You can spot Touch Connors credited in episodes of The Millionaire and The Secret Service, not to mention that Gunsmoke we mentioned at the top, "The Mistake." By the time Connors landed his first regular role as part of the cast of Tightrope in 1959, he had permanently become Mike.

There's just one wrinkle to this fascinating story. If you look at a 1948–49 UCLA men's basketball roster or team photo, you won't find an Ohanian nor a Connors. We were curious and did a little digging. 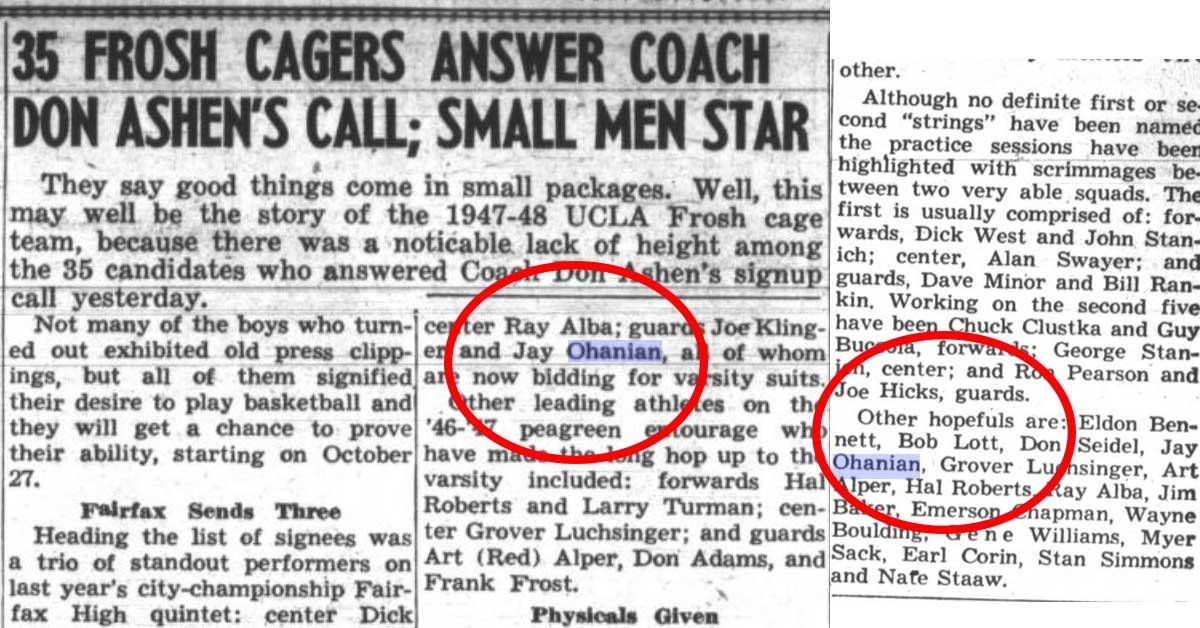 In 1947 editions of the UCLA student newspaper The Daily Bruin, two references to Ohanian can be found. The first refers to him being on the "Frosh Cager" team. The second deems Ohanian a "varsity hopeful." Back then, there would have been a J.V. squad, a second tier of hopeful players. Connors seems to have been in this mix. Oh, and the paper reported his name as "Jay Ohanian." There's another name to his credit.

Oddly, Connors was not the only famous television Connors to earn his screen name from college athletics. In the early 1940s, a baseball star at Seton Hall named Kevin Connors was known for yelling on the diamond, "Chuck it to me! Chuck it to me!" So, his teammates nicknamed him "Chuck." Of course, you might know Chuck Connors better as The Rifleman.

Years later, as the star of Mannix, Mike Connors had a chance to flash his ball-handling skills and work alongside another UCLA legend. Kareem Abdul-Jabbar (then known as Lew Alcindor) appeared in season four's "A Day Filled with Shadows." Early in the episode, Mannix follows a lead to a basketball court. Wearing a plaid blazer, he dribbled to his right, shakes a defender, and pops up for a baseline jumper. He sinks the show. Connors still had the touch. 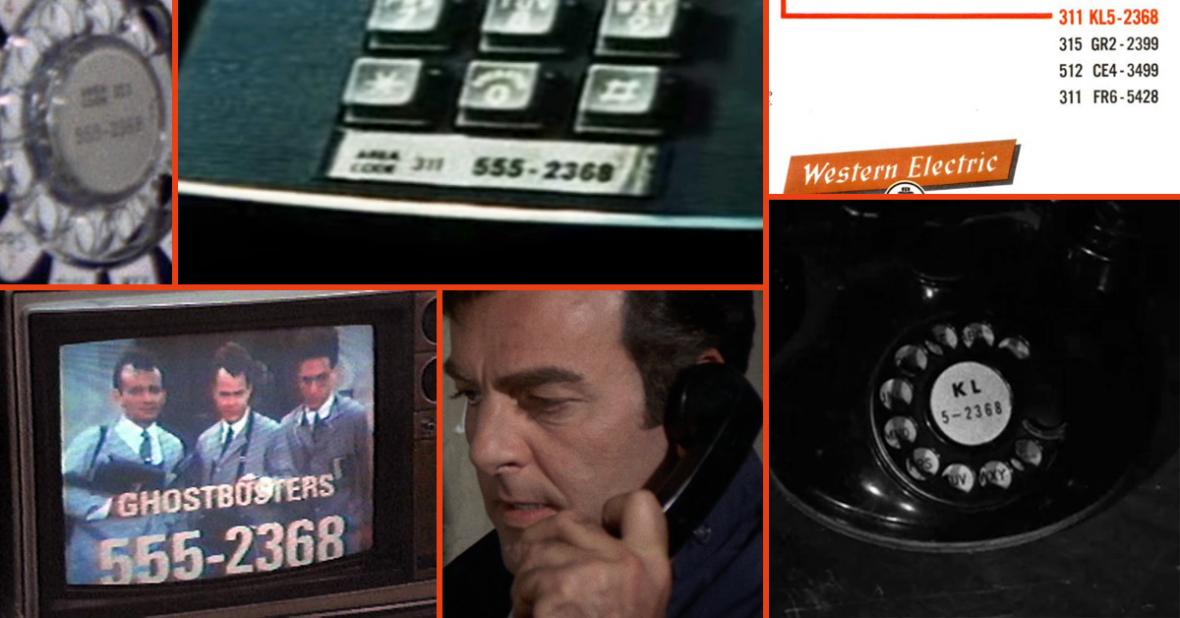 Did you know?
Ever wonder why every fictional character seems to have the phone number 555-2368?

Did you know?1960scars
Mike Connors bought a $4,000 Bentley that landed him the lead role on Mannix
Are you sure you want to delete this comment?
Close