MeTV network is available locally on Bluefield affiliate WVVA on channel 6.3. If this isn’t the way you watch, click here to see Where to Watch

Printable Schedule PDF
Load Earlier Shows
5:00am
Planet of the Apes
The Surgeon
"Galen shares a book on human anatomy with an old love who is now a surgeon when Virdon is injured."

6:00am
The Powers of Matthew Star
Prediction
"When another student begins having violent visions, Matt has to stop them from coming true."

7:00am
Saved by the Bell
The Masquerade Ball
Zack and Slater bet on who can kiss Tori first, and their best chance will come at a masquerade ball. Lisa has a secret admirer, Screech, but she thinks it's Zack.

7:30am
Saved by the Bell
Drinking And Driving
After a night of drinking at Ox's party, the gang lands in big trouble when they total Lisa's mother's car.

8:00am
Saved by the Bell
Earthquake
Tori and Zack get caught in an elevator during an earthquake along with Mr. Belding's wife—who goes into labor!

8:30am
Saved by the Bell
Slater's Sister
Slater is rejoined with his long-lost sister who he hasn't seen in years. When Zack starts falling for her, Slater doesn't approve and is determined to stop the romance. 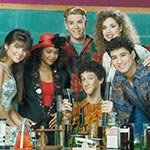 On Now
Saved by the Bell
The Will
A favorite graduate dies and leaves $10,000 in his will to Bayside, creating a battle of the sexes at the school as both feel they deserve the endowment.

Can you match these classic TV shows to their original titles? 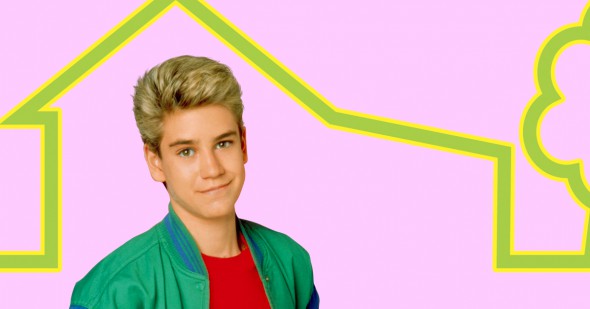 Stay in this 'Saved by the Bell' star's home, just 40 minutes from Bayside High 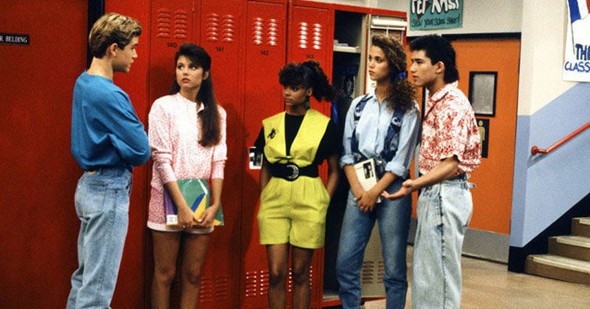 'Saved By The Bell' themed restaurant in the works
9:30am
Remind Me
Saved by the Bell
No Hope With Dope
A famous film star comes to Bayside to shoot an anti-drug PSA. The gang is enamored with him but then they discover that he uses drugs himself.

10:00am
Remind Me
The Flintstones
The Rock Vegas Story
Fred, Wilma and the Rubbles travel to a desert gambling resort where Fred expects big winnings.

10:30am
Remind Me
The Flintstones
Divided We Sail
When Barney substitutes for Fred on TV game show and wins a prize, he and Fred squabble over ownership of the gift.

11:00am
Remind Me
The Flintstones
Barney The Invisible
Fred invents a soft drink formula that causes Barney's hiccups to disappear--along with Barney!

11:30am
Remind Me
The Flintstones
The Buffalo Convention
Wilma's talking bird is silent until lodge brothers Fred and Barney start planning a secret outing.

12:00pm
Remind Me
The Brady Bunch
Going, Going... Steady
Marcia comes home from school in a daydream and the rest of the family can't figure out her problem. It seems Marcia has a crush on a boy who doesn't even know she's alive, at least not until she studies up on his favorite hobby, insect collecting. The next time she comes home from school, she has exciting news, he asked her to "go steady."

12:30pm
Remind Me
The Brady Bunch
Cyrano De Brady
Peter falls for Jan's friend Kerry, but needs Greg's worldly advice. Greg plays Cyrano for Peter, causing Kerry to think that it's Greg who has feelings for her.

1:00pm
Remind Me
The Brady Bunch
Love And The Older Man
Marcia falls for Dr. Vogel, the family's new dentist. When he asks Mike if Marcia would be interested in doing some babysitting for his kids, she's mistakenly under the impression that he's asking her out on a date.

1:30pm
Remind Me
The Brady Bunch
Never Too Young
After Bobby defends Millicent at school she rewards him with a kiss and he immediately sees skyrockets. After kissing her again and seeing those same skyrockets, she shares the news that she may have the mumps. Meanwhile, the family prepares for a Roaring '20s party.

2:00pm
Remind Me
Happy Days
The Apartment
Richie, Potsie and Ralph get an apartment of their own.

2:30pm
Remind Me
Happy Days
They Call It Potsie Love
Joanie develops a crush on Potsie after he sings to her at Arnold's.

3:00pm
Remind Me
Laverne & Shirley
Fakeout At The Stakeout
Laverne and Shirley fall victim to a peculiar robber known as the "Milwaukee Masher."

3:30pm
Remind Me
Laverne & Shirley
Hi, Neighbor
Just when Laverne and Shirley thought they'd have some peace and quiet, look who moves into the building—Lenny and Squiggy are their new second-floor neighbors!

4:00pm
Remind Me
Happy Days
Tell It To The Marines
Convinced that no girl could be attracted to him and that he's useless, Ralph threatens to enlist with the Marines.

4:30pm
Remind Me
Happy Days
Dance Contest
Marion, tired of the monotony of everyday house chores, decides to enter a televised dance contest. When Howard won't participate with her, she secretly enlists the help of Fonzie.

5:00pm
Remind Me
Mama's Family
Alien Marriage
Vint schemes to make money by pretending to be married to a girl from Portugal in need of a green card—until Mama catches wind of the plan.

5:30pm
Remind Me
Mama's Family
Positive Thinking
After listening to tapes on positive thinking, Eunice becomes a changed woman, even securing a part in a play. But when the director cuts all of her lines, she starts to feel her old nature creeping back.

6:00pm
Remind Me
The Love Boat
Critical Success / Love Lamp Is Lit / Take My Boy Friend, Please / Rent A Family / Man In Her Life (part 2)
"A jealous Stacy comes to regret pushing Mark away. Wendy and Bill try to stop her mother from leaving after she misinterprets their purchase of wedding rings. Paul tries to keep his boss from learning about his girlfriend; and Lisa from learning about his "family." The Haymans have second thoughts about the diamond heist--and their break-up--after meeting the kids from the orphanage. Stella stings Elliot when she offers her harsh opinion about his play."

7:00pm
Remind Me
M*A*S*H
Souvenirs
Korean children and American soldiers are often badly wounded when they hunt for souvenirs that the enemy have booby-trapped. Potter asks for it to stop, and Hawkeye and B.J. put a local junk dealer out of business.

7:30pm
Remind Me
M*A*S*H
Post Op
In the midst of a deluge of patients and their individual medical histories, the 4077th is out of blood. Everyone in camp is donating at 48-hour intervals when a truckload of Turkish soldiers arrives to offer their blood and save the day.

8:00pm
Remind Me
Columbo
Prescription: Murder (pilot)
"A psychiatrist uses a patient he is having an affair with to help him kill his wife, but his perfect alibi may come apart at the hands of a seemingly befuddled LAPD lieutenant."

10:00pm
Remind Me
Collector's Call
Meet Allen Stewart
"Many collectors aspire to turn their collection into a museum; Allen Stewart is one step ahead of them. His Hall of Heroes superhero museum houses his collection of 65,000 comic books – all of which he’s read – as well as a wide range of memorabilia, movie props, and more. Allen shares with Lisa some of his proudest finds: a wooden Superman action figure from 1939; the 1942 comic that first cover-featured Wonder Woman; the sports car crushed by Iron Man in the first Marvel Universe movie; and a shield used onscreen by Chris Evans’ Captain America. Allen is joined by his son Kyle, who grew up with the collection. We’ve brought along Peter Przysiezny, president of Comic Book Roadshow, who will set a value on the museum’s contents. Peter has also brought a copy of the rare comic that debuted Batman’s arch-nemesis The Riddler, which Allen doesn’t have, in the hopes of making a trade with him."

10:30pm
Remind Me
The Honeymooners
The Worry Wart
The IRS invites Ralph to clear something up on his tax return and that drives Ralph nuts (though he discovers he just forgot to sign his name).

11:00pm
Remind Me
The Dick Van Dyke Show
It May Look Like A Walnut!
Rob falls asleep with a sci-fi movie on and gets visited by an alien from another planet.

11:30pm
Remind Me
The Dick Van Dyke Show
The Curious Thing About Women
Laura is shocked when Rob uses their breakfast banter as basis for an "Alan Brady" sketch.

12:00am
Remind Me
The Twilight Zone
Jess-belle
A woman enlists the aid of a witch to cast a spell that will make a man fall in love with her.

1:00am
Remind Me
The Alfred Hitchcock Hour
Blood Bargain
A contract assassin reneges after meeting his target's handicapped wife.

2:00am
Remind Me
The Fugitive
The Homecoming
While working as a research technician for the wealthy Allan Pruitt, Kimble gets involved in the business of Allan's teenage daughter, Janice, who returns home after spending a year in a mental hospital recovering from a nervous breakdown after witnessing

3:00am
Remind Me
Mission: Impossible
The Psychic
The team must trick a crooked investment promoter into endorsing $80 million in stolen stocks and then getting them back from him.

4:00am
Remind Me
Peter Gunn
The Murder Clause
Pete is hired by trumpet player Bud Bailey's wife. She is accusing her husband of wanting to kill her for the insurance money.

4:30am
Remind Me
Peter Gunn
The Dummy
Ventriloquist Marvelous Marvon is found murdered after his act. Gunn is hired by Marcel Benoit to the find killer. Rinaldo, his dummy, turns out to be no dummy.